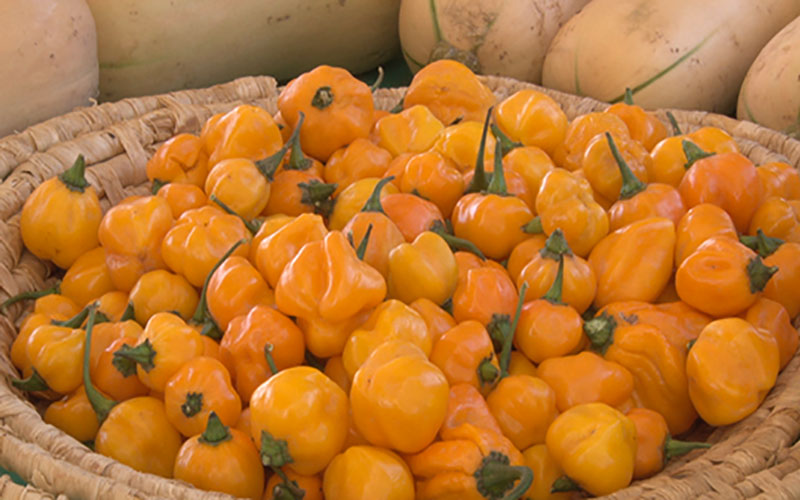 Merchants sell bell peppers and other local foods at the Roadrunner Park Farmers Market in Phoenix on Saturday. (Photo by Mitch Quesada/Cronkite News)

While some shoppers enjoy spending their Saturday mornings at local farmers markets, new research indicates Arizona lacks per-capita sales in the local food industry.
The 2015 Locavore Index found that of the 50 states and Washington, D.C., Arizona has the second lowest per-capita sales for local foods. Only Texas spends less on local food. Strolling of the Heifers, a non-profit group that connects people with healthy local food, created the index in 2012.
An official with Local First Arizona said she hopes to change this by re-launching its website, the Good Food Finder. Local First Arizona is a non-profit organization that promotes locally owned businesses.

“It’s definitively an active project,” said Natalie Morris, the founder of the website. “It’s something that we have high hopes for in terms of lots of things that we can be able to add to the project and that way I think it’s consumer driven.” Although Arizona ranks low on its “local food commitment,” national sales are big business. The U.S. Department of Agriculture estimated total local food sales were $6.1 billion, according to a January report to Congress.

Local First Arizona officials said they hope the Good Food Finder helps spread awareness of local food nearby. It lists more than 200 farmers and farmers markets that consumers can visit in Arizona.

“(It’s) place for farmers and food artists in the state to be able to promote themselves,” Morris said.