After his history-making address to Congress, Pope Francis appeared on the Speaker’s Balcony overlooking the Mall to bless the crowd and ask for their prayers. (Photo by Elizabeth Blackburn/Cronkite News) 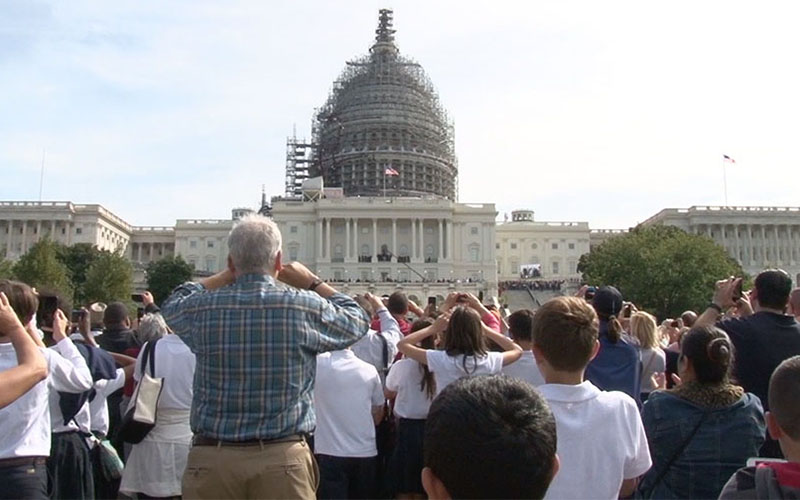 Thousands gathered outside the Capitol for a chance to hear Pope Francis’ speech to Congress, the first time a pope has ever addressed the body. (Photo by Elizabeth Blackburn/Cronkite News) 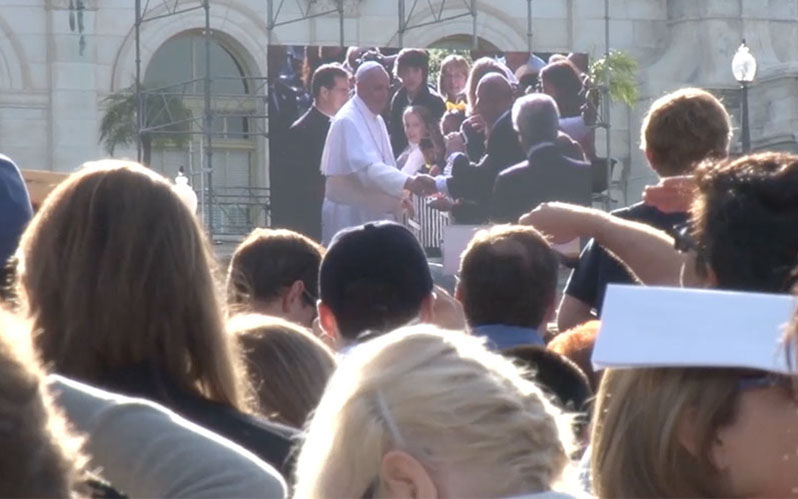 About 50,000 tickets were handed out for the space on the West Front of the Capitol, where the pope’s speech to Congress inside was shown on big-screen TVs. (Photo by Elizabeth Blackburn/Cronkite News)

WASHINGTON – They started gathering before the sun came up Thursday, eager for a spot outside the Capitol where they could witness Pope Francis’ historic address to a joint session of Congress.

They came from all over the U.S. and from other countries. By the time the pope started speaking after 10 a.m., thousands were assembled on the West Front of the Capitol and on the National Mall beyond, in a scene that was part pilgrimage and part picnic.

“This is something really special, so it’s hard to explain,” said Sister Minerva, a nun from Mexico who is currently working in New Jersey.

People waved flags and signs, and schoolchildren sang while they waited for the address to begin. Parents hoisted children on their shoulders and everyone in the crowd maneuvered for the best spot to watch the giant TV screens outside the Capitol that carried the pope’s speech to Congress inside.

It was the first time a pope has ever addressed Congress, what Roy Berger called a “once-in-a-lifetime thing.”

“It was really cool, you could feel the excitement from all the people,” said Berger, who was at the Capitol with his wife, Mary.

The Bergers, who live in Arizona for part of the year, said they “thoroughly enjoyed” the speech by Pope Francis, whom they said is the one pope they wanted to see.

“I think he made lots of good points,” Roy Berger said. “I liked that he focused on America, our people and the great things that happen here.”

Alexandra Gjurasic traveled from Tucson with her family to see the speech, after getting tickets to the event from Rep. Martha McSally, R-Tucson.

“The content met all our expectations, I think as a family,” Gjurasic said of the speech, which touched on social justice, environmental issues, immigration.

Gjurasic said being in Washington for the pope’s speech and “just being able to feel his warmth” was important. She hoped that members of Congress can take away some of that message.

“I really hope that the members of Congress … take to heart what the pope said and that they really do apply the ideas of cooperation and social justice and public service to their session this year,” she said.

After his address, the pope appeared with congressional leaders on the Speaker’s Balcony looking out over the Mall. As the onlookers cheered, and some hugged, Pope Francis extended blessings, and especially blessed the children there, before asking those in the crowd to offer up prayers for him.

“It was a real thrill to see him in person,” Mary Berger said.