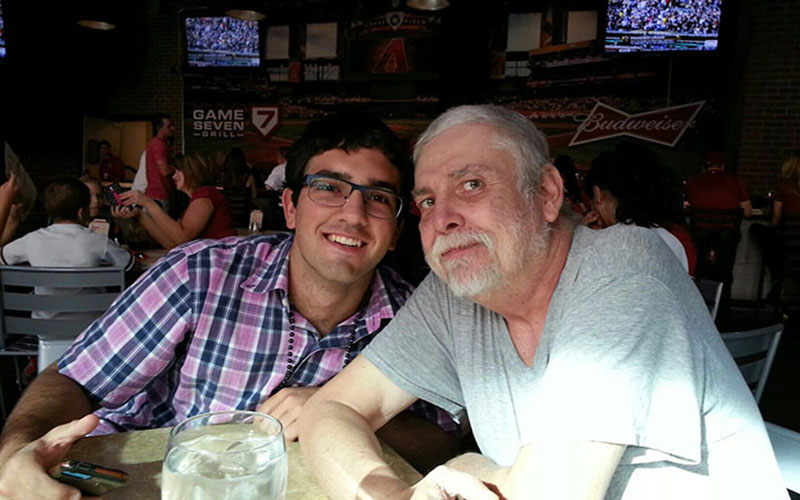 James Malone, left, with his dad, Jim, before an Arizona Diamondbacks game. His family said going to games one of the favorite pastimes of Jim Malone, who died this summer. (Photo courtesy Sheri Malone) 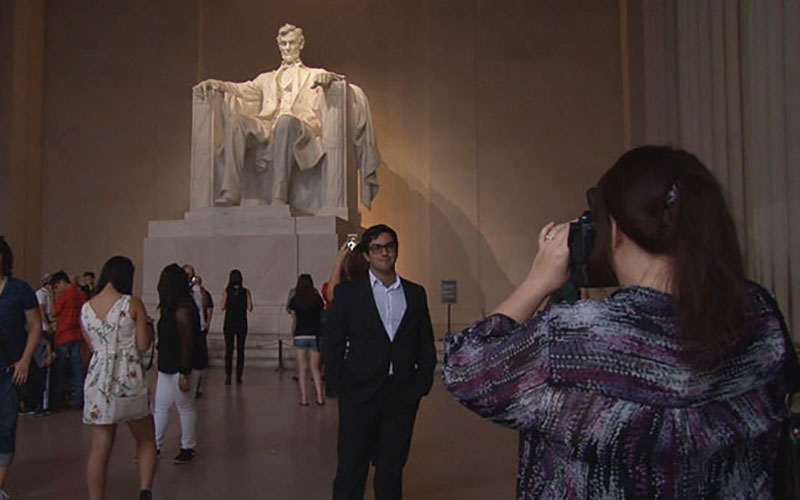 James Malone poses at the Lincoln Memorial for his stepmom, Sheri Malone, during their Dreams for Veterans trip that was the last wish of husband and father Jim Malone. (Photo by Elizabeth Blackburn)

WASHINGTON – James Malone and his stepmom, Sheri, looked like any other first-time tourists in Washington last week as they went from monument to monument, posing and taking photos.

But the Malones were doing more than making memories – they were also fulfilling a loved one’s last wish.

The Chandler family was in Washington with Dreams for Veterans, an organization under the Dream Foundation that grants wishes to terminally ill veterans like Jim Malone, the late father and husband to James and Sheri.

A Navy veteran who was in active duty from 1977 to 1981, and in the Navy Reserve from 1982 to 1987, Jim Malone was diagnosed in September 2013 with stage-four esophageal cancer. His doctor and social worker at the time suggested that he fill out an application to Dreams for Veterans. Chandler resident Sheri Malone with her late husband, Jim, who died this summer of cancer before he could fulfill a dream of going to Washington with his family. (Photo courtesy Sheri Malone)

Jim’s dream was to take his family to Washington, D.C.

“He really just wanted to share his love of the country and why it was always so important to him,” Sheri said of the trip. She said her husband’s love of country “is personified in D.C, and that is why D.C. was so special to him.”

Jim didn’t think his wish would be considered, but told Sheri that if she wanted to “waste her time” she was welcome to fill out the application. She did, and Dreams for Veterans granted Jim’s wish in June 2015.

Sheri said Jim felt undeserving, because he had never served in combat, but being granted his wish left him feeling overwhelmed and grateful.

James said the wish-granting party at a Carl’s Jr. – which partners with Dreams for Veterans on the program – allowed him to “see my hero smile one last time.” Jim Malone died later that month, on the morning the family was scheduled to travel to Washington.

Four months later James and Sheri were invited to a Washington event at which other families and veterans would be talking about their wishes. The Malones decided to go.

At the Capitol Hill event Thursday, James Malone talked about his dad as his “hero.” He had the crowd laughing with his father’s story about trying to re-enlist after 9/11, when Jim Malone said “they told me when they need a 40-year-old fat pool guy, they’ll call me.”

Rep. Matt Salmon, R-Mesa, gave the family a flag that flew over the Capitol in Jim Malone’s honor.


A previous version of this story misstated the Dream Foundation policy on awarding trips to survivors of veterans who have died. That reference has since been removed from the story.

“This flag was flown for the Malone family in honor of James Malone to honor the life of U.S. Navy veteran James Malone. Your deep love of the country will never be forgotten,” Salmon said as he presented the flag. “Thank you for your patriotism, selflessness and brave service to your country.”

Sheri said that in addition to the trip, Jim’s other wish was to see his son graduate from high school.

He was there to see James graduate from Chandler High School this spring and to learn James had received a full scholarship to attend Arizona State University, where he is now in his first semester studying business.

The trip to Washington included a meeting with Sen. John McCain, R-Arizona, and a tour of the Capitol in addition to stops at monuments along the National Mall.

“It’s felt like Jim’s been with us today,” Sheri said. “It was a last gift from him.”