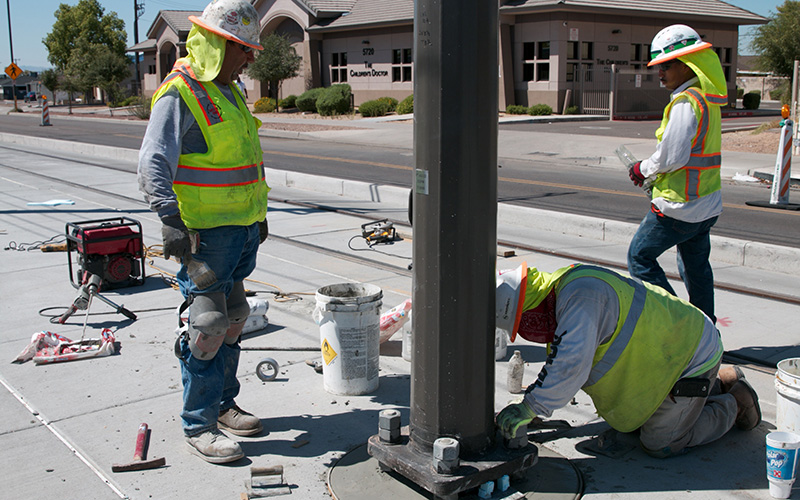 Workers construct a portion of the light rail line near 19th and Montebello avenues. (Photo by Amy Edelen/Cronkite News) 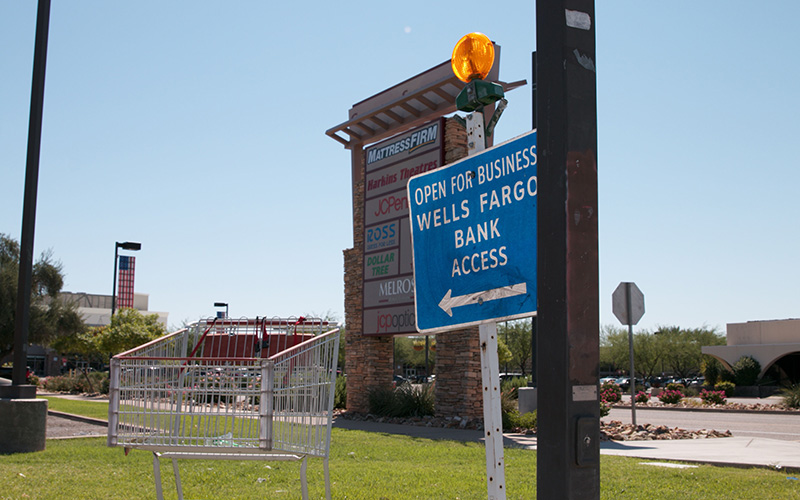 Businesses owners along 19th Avenue said they are struggling to attract customers because of reduced traffic lanes and increased construction. (Photo by Amy Edelen/Cronkite News)

However, until the extension is completed, businesses and customers will continue to endure delays in one of the busiest traffic areas in the region.
Businesses at the intersection of 19th and Northern avenues said they’re struggling to attract customers because of heavy construction and lane closures.

B’s Barber Shop opened more than 20 years ago. When owner Boris Baybachayev purchased the shop in 2008, the shop drew walk-in customers. Since construction, that doesn’t happen any more, he said.

“The only way we are surviving right now is off our regular customers,” Baybachayev said. “We have no foot traffic any more, no walk-ins, nothing like that.”

Other business owners are anxious for construction to finish so traffic flow can return to normal, he said.

“We’re surviving. We’re just above water. It’s not easy. It’s tough,” Baybachayev said. “I can say hold on as long as you can. Hopefully, it will pay off in the long run.”

Tony Spahiu, the owner of Uncle Tony’s New York Pizza, said customers used to line up outside the door. He recently took out a bank loan to stay afloat.

Spahiu bought the restaurant in a short sale. If he knew about the construction at the time, he said he would have thought twice about purchasing the property.

Both businesses said they received minimal help from the city or Valley Metro.

“If there is any kind of conflict, we are more than willing to work with those businesses with that dedicated staff and help respond and reassure them that we are here to support them,” Tierney said. “Because we know that when we are finished with construction, they are going to benefit from bringing more people to those storefronts.”

Valley Metro conducted a study indicating the light rail spurred more than $8.2 billion in economic development within a half-mile of the 28 light rail stations along the 20-mile route spanning from Phoenix to Tempe and Mesa. The cost to build the line was $1.4 billion, paid through federal, local and regional funding sources.

The northwest light rail extension was a sensitive utility project, Tierney said. Valley Metro had to move and replace 60-year-old infrastructure, which contributed to the increased construction in the area.

The first part of northwest light rail line is scheduled to open in March 2016.

The second phase, which will extend an additional 1.8 miles toward Interstate 17, will finish in 2026.

However, Valley Metro officials estimated workers would remove barricades and open the streetscape in the next 30 to 60 days to allow access to businesses effected by the construction, Tierney said.

“They promised us (by) two months or the end of the year, it’s going to be completely done, and I pray to God that’s going to be true,” Spahiu said. “But if this keeps going in 2016 or further, I don’t think we’ll be open. I don’t have much power to stay open any more.”