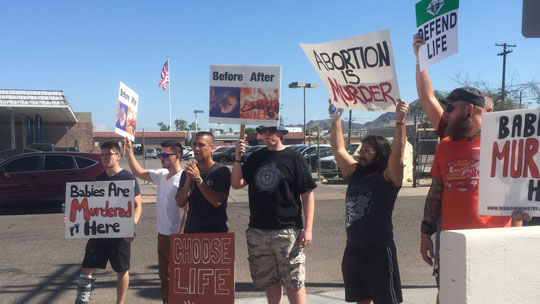 Protesters outside a Planned parenthood office in Phoenix oppose the the sale of fetal tissue from abortions. (Photo by Alexa D’Angelo)

Grecia Magdaleno walked into Planned Parenthood less than a year ago with $5 to her name.

The 20-year-old Latina had no health insurance or primary care physician and needed a physical exam, pap smear and contraceptives.

“I went in with $5 and they didn’t charge me a dime,” Magdaleno said. “Instead, when I was leaving after receiving my care the kind receptionist simply asked me for a donation.”

Magdaleno is one of thousands of Arizona women fighting to prevent funding cuts after a viral video purportedly showed Planned Parenthood staffers discussing the sale of fetal tissue.

In July, Republicans in the U.S. Senate introduced a bill to defund Planned Parenthood, but it failed to advance. State lawmakers in Arizona plan to introduce their own plan to cut funding next legislative session.

Planned Parenthood has been the subject of renewed criticism following the release of these videos from a California anti-abortion group last month that appears to show officials discussing aborted fetal organs and tissue the organization provides for research.

Planned Parenthood’s website says allegations that the organization profits from the practice are fabrications by abortion opponents. Those within the organization say the only exchange of money the staffers could have been discussing is a transportation fee for the tissue, which is the same as transporting organs.

Protesting recently outside a Phoenix Planned Parenthood clinic, Steven Gonzalez of Phoenix said he turned out because he believes that babies are murdered there.

“I ask that they turn from sin because everyone can be saved, but if they keep in their sin, they must face God’s judgment,” he said. “We are here out of love, not hate.”

“Defunding Planned Parenthood would directly affect my mother and I,” said Grecia Magdaleno, who was demonstrating nearby. “I am not going for abortions, I am going for health care.”

Recent public outrage about fetal tissue focuses on abortions, but Planned Parenthood says only about 3 percent of patients are looking to terminate a pregnancy. Most patients go to the clinics for other services including contraceptives, cancer screening and testing to identify and treat sexually transmitted diseases, according to Planned Parenthood’s annual report.

“Most people aren’t in that 3 percent,” Magdaleno said. “Most are just people who need health care and are afraid to go elsewhere.”

About one in five women turn to a Planned Parenthood clinic at some point in their lives for health care, according to organization’s website.

“We exist for women’s health and to prevent unplanned pregnancy using contraceptives,” Jodi Liggett, vice president of public affairs at Arizona Planned Parenthood. “People don’t understand that most of what we do isn’t abortion.”

Magdaleno said that earlier in the year she went to a Planned Parenthood clinic for treatment of a cold.

“I go there for everything; they are my doctors,” she said. “My mother has gone for pap smears and breast exams, and she feels the same way I do.”

The 20-year-old said her family lost its insurance after her brother was diagnosed with autism. When they had trouble finding a new insurance company, the Magdalenos were forced to rely on the state’s Medicaid program.

“It would have a huge public impact,” Liggett said. “And would create a financial burden for taxpayers that I think a lot of people don’t understand.”

At Planned Parenthood rallies in August, supporters urged people to #StandwithPP, a hashtag that was trending on Twitter with a similar hashtag #DefundPP trending for opponents who held counterprotests calling on lawmakers to cut funding for Planned Parenthood.

Maricopa County Attorney Bill Montgomery took a stand to cut federal funding for Planned Parenthood at a rally in Phoenix in early August.

“There is no reason to fund this charade of women’s health care any longer,” Montgomery told the crowd. “The profit-driven atrocities must end, and America must not fund them anymore.”

A spokesman for Montgomery’s office said that If the organization sees funding cuts women seeking care can go to one of the 183 comprehensive health care centers in Arizona that offer services to low-income minority women.

Liggett said Planned Parenthood’s goal is providing care and access to as many people as possible.
“In general we mostly see people of minorities and Latina women, but we don’t see it that way,” she said. “We see it as serving people.”

Liggett noted that Texas tried to slash funding for Planned Parenthood and family planning clinics in 2011. The Texas Health and Human Services Commision estimated that would result in 23,760 births from unplanned pregnancies in 2014 and 2015, resulting in an extra $273 million for taxpayers. The commission attributed this rise in unplanned births, largely due to lack of access to contraceptives.

In 2014, Planned Parenthood prevented 500,000 pregnancies with contraceptives, according to its annual national report.

Many in the state of Arizona and across the country automatically associate Planned Parenthood with abortions.

Magdaleno said there’s one thing she wants to critics of Planned Parenthood to know:

“Defunding Planned Parenthood would be affecting a life. All of this is about compassion for women wanting care. It would be hypocritical for those calling for the defunding of Planned Parenthood to take that away as they criticize the organization for abortions.”

Most women who visit Planned Parenthood in Arizona are low-income, minority women, Liggett said. Liggett attributes that to two things: The organization doesn’t require health insurance or ask for proof of citizenship.

Magdaleno, a Phoenix native, is a U.S.-born citizen. Her mother, an immigrant from Mexico, has lived in the United States for 23 years.

More than 2.5 million women seek health care services at Planned Parenthood clinics across the country instead of going to traditional primary care physicians, according to the organization’s annual report.

Diali Avila, who works with Planned Parenthood outreach and education programs, said the organization follows a clinic-based system similar to those in Mexico and South America.

“Almost everyone who goes to the clinic in Maryvale is from another country,” Avila said of a west Phoenix clinic in an area that’s home to many immigrant families. “They love us because they trust us.”

According to the American Congress of Obstetricians and Gynecologists, undocumented immigrants are less likely to visit a physician in an outpatient setting than the general U.S. population and birth complications are more common among undocumented women, as is neonatal morbidity.

“For these women we would be taking away their lifeline to health care,” Avila said. “They wouldn’t be able to get care like this anywhere else.”

And Latinas have the highest uninsured rate – 38 percent – of any racial or ethnic group.

Magdaleno said she fears that if Planned Parenthood loses funding women like her will lose access to health care.

“They truly mean their slogan: Care no matter what,” she said. “I wouldn’t be able to get this kind of care anywhere else, and neither would my mother.”