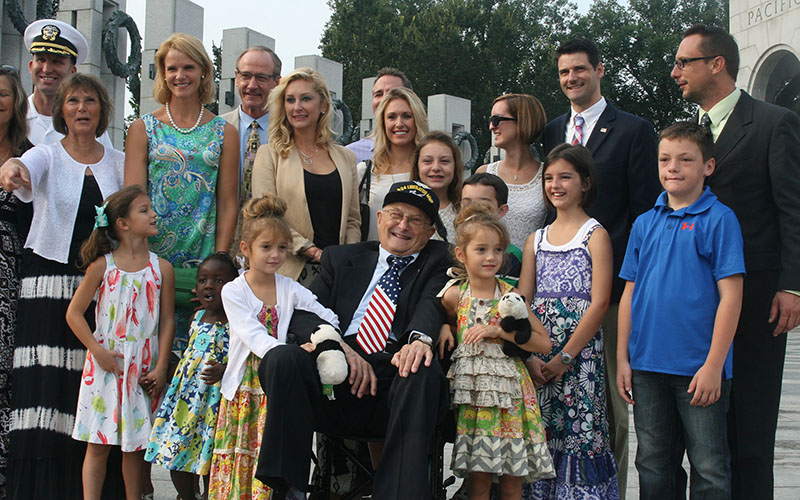 Prescott resident Bill Schrader, a World War II veteran who took part in ceremonies marking the end of that war, is surrounded by his family. Daughter Susan Howe, who founded Honor Flight Arizona, stands at left in the white jacket. (Photo by Tom Blanton) 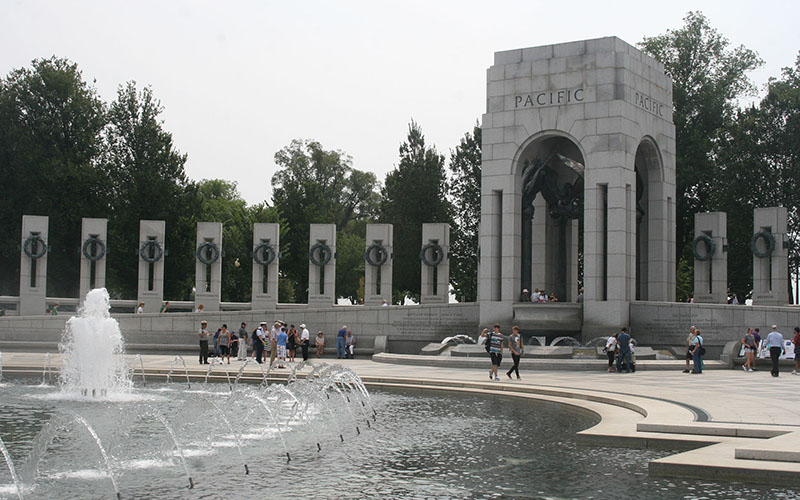 The National World War II Memorial, completed in 2004, sits on the National Mall. Arches for the Pacific and Atlantic theaters and a pillar for every state flank a wall with stars representing the more than 400,000 Americans who died in the war. (Photo by Tom Blanton) 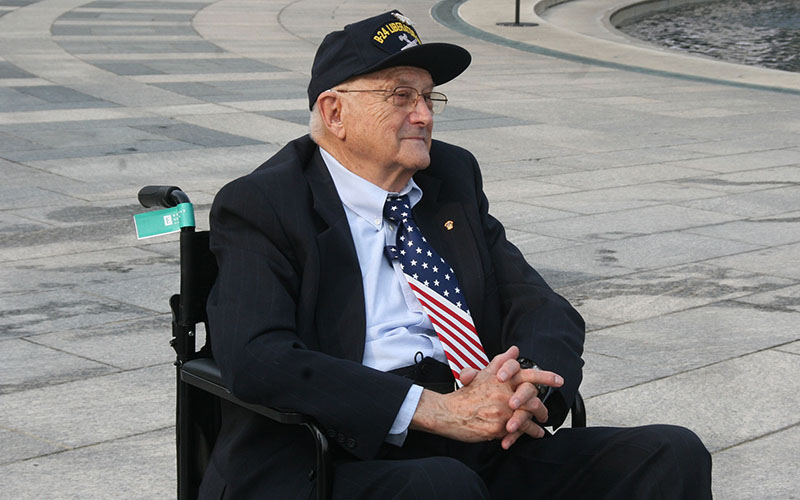 Bill Schrader at the National World War II Memorial in Washington, where he laid a wreath as part of a ceremony marking the 70th anniversary of the war’s end. He was an airman in the Pacific Theater, and just a teen, at the end of the war. (Photo by Tom Blanton)

WASHINGTON – From the nose of a B-24 bomber soaring low over the Pacific Ocean 70 years ago, Army Air Corps gunner Bill Schrader scanned the horizon for Japanese military vessels.

Not to engage them, but to confirm that they were flying a white flag of surrender.

Schrader, now 89, recalled that final mission Wednesday as he joined dignitaries and other veterans who laid wreaths at the National World War II Memorial in Washington to mark the official end of the war.

“For me, it’s a great honor to be here,” said Schrader, a Prescott resident, before the ceremony began.

Japan’s surrender was announced Aug. 15, 1945, but it wasn’t official until Sept. 2, when Japanese delegates boarded the USS Missouri in Tokyo Bay and signed the surrender documents.

None of them were Schrader’s friends or comrades, according to his daughter, Susan Howe.

“All 10 of them (his friends) flew in the B-24 and all 10 of them returned to the United States,” said Howe, who was on hand for Wednesday’s wreath-laying along with four generations of Schrader’s family.

A handful of veterans took part in the ceremony, along with representatives of 14 other countries at the imposing monument that sits on the National Mall between the Washington Monument and the Lincoln Memorial.

A hot and sticky Washington morning did not deter passersby from stopping to watch, along with scores of family members and other attendees, as a U.S. Navy band played and dignitaries spoke.

One of those was former U.S. Sen. Bob Dole, a veteran of the war.

“There were about 16.5 million of us who served in World War II and now we’re down to about 850,000,” Dole said during remarks about the so-called “greatest generation.”

“We are really the disappearing generation,” Dole said.

After the speeches, Dole, Schrader and others proceeded – some of them pushed in wheelchairs – to lay wreaths at the memorial, against a backdrop of the Lincoln Memorial.

Schrader laid a wreath representing the National Park Service, which maintains the memorial, and the Friends of the National World War II Memorial, which hosted Wednesday’s event.

The end of the war didn’t mean an immediate return home for Schrader, whose squadron remained in the Philippines for three months after the Japanese surrender. Most of that period is a blur, he said, but recalled with a laugh how he and a radio operator friend bought motorcycles to pass the time and wound up with gravel burns to show for their inexperience with the bikes.

Schrader, whose service began in April 1945, was back home in the U.S. by November. A veteran of the war, but still a teenager, he found work as a sales representative in California before getting married in 1947. He ended up in Arizona decades later.

Roughly 25,000 veterans of the war were living in Arizona as of last year, according to the latest numbers from the Department of Veterans Affairs.

Inspired by her father and those other vets living in the state, Howe started the Arizona chapter of Honor Flights in 2008 as a way of giving back to them. The organization flies Arizona veterans of the war to Washington to see the memorial to their service.

Behind the spot that Schrader and the others decorated with wreaths Wednesday are thousands of gold stars, each representing 100 American soldiers who died in the war.

“I got to come home,” Schrader said after the ceremony, acknowledging that many others never got that chance.

Wreaths marking the 70th annivarsary of the end of World War II are placed in front of a wall honoring Americans who died in that war. Each star on the wall represents 100 U.S. dead. (Video story by Charles McConnell)