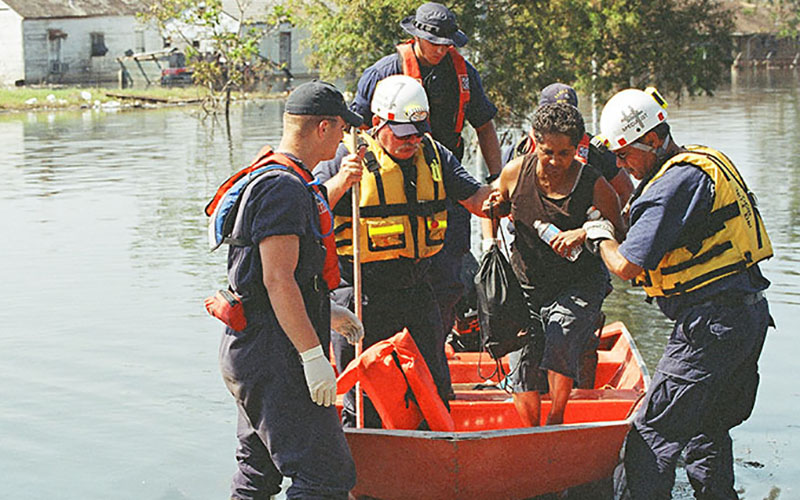 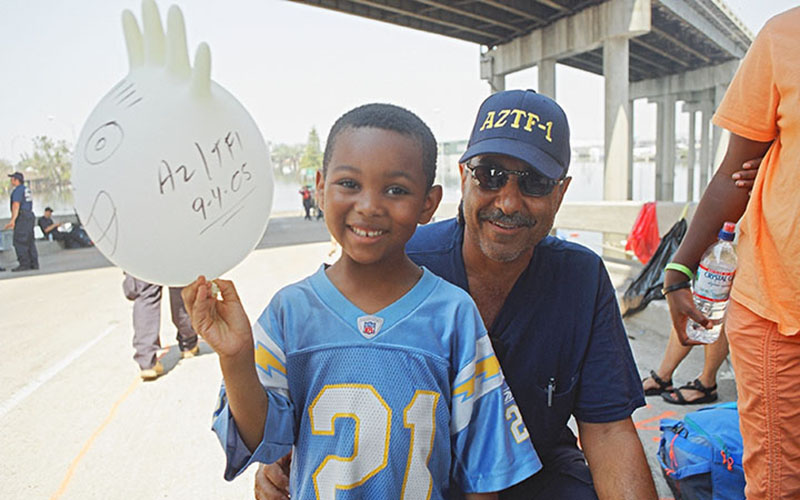 Retired Phoenix Batallion Chief Jim Arbagey, who went to Louisiana to help after Katrina, helps bring a smile to a local boy with a medical glove turned into a balloon. (Photo courtesy Phoenix Fire Department) 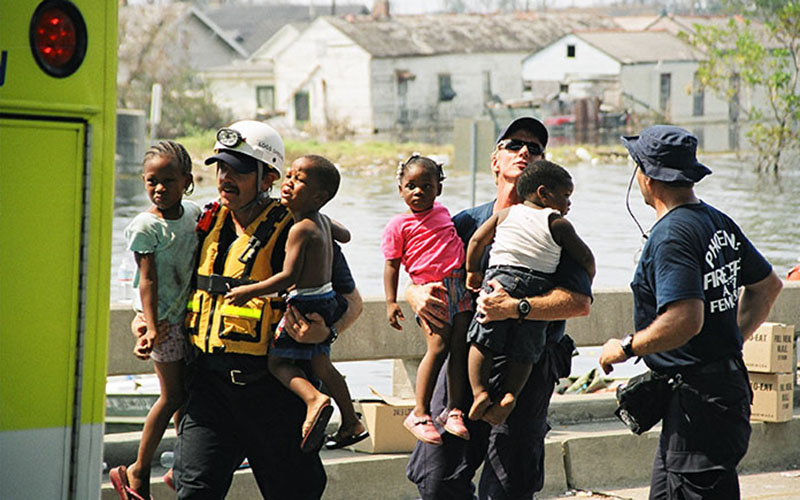 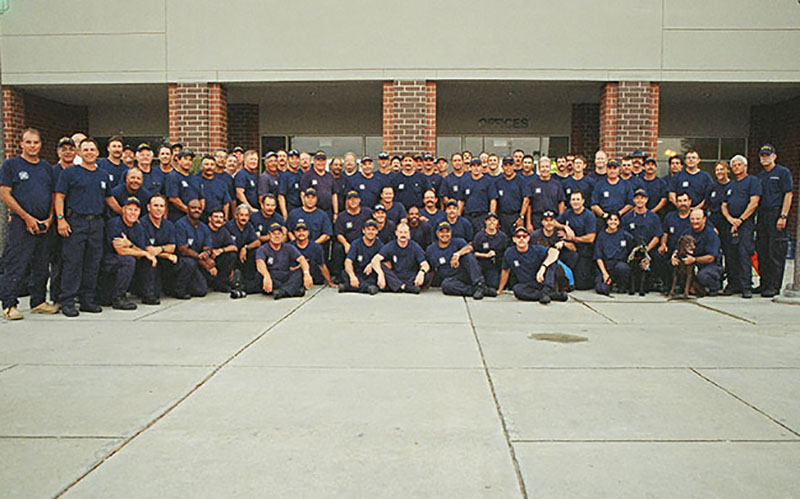 WASHINGTON – It’s been 10 years since he responded to the devastation that was left in the wake of Hurricane Katrina, but the memories are still clear for Phoenix Fire Department Capt. Darrell B. Wiseman.

“My first recollection is driving onto the causeway” as he arrived in Louisiana with 80 members of Arizona Task Force 1 in the days after the storm. “The causeway, their freeway system, was like a mini city.”

The road was crowded with displaced people living – and some dying – there, said Wiseman, who remembers using a causeway exit as a boat ramp. He recalls water rescues where his team boated down what had been streets, trying to avoid road signs and cars below.

But what Wiseman said he remembers most, through all the memories of the devastation, was “how impressive those people were in surviving.”

Wiseman was one of hundreds of Arizonans from scores of organizations who went to the Gulf Coast to assist victims of Katrina, or worked with the hundreds more – some officials estimate the number of displaced people in the thousands – who wound up in Arizona in the days and weeks after the storm.

When it made landfall around 6 a.m. on Aug. 29, 2005, Hurricane Katrina had dropped from a Category 5 hurricane over the Gulf to a “strong” Category 3 hurricane with wind speeds of about 127 mph, according to a National Oceanic and Atmospheric Administration report. But it was still an “extraordinarily powerful and deadly” hurricane, NOAA said.

Before it passed, it would become the costliest hurricane in U.S. history, with costs and damages in excess of $125 billion. More than 250,000 people in four states were displaced, and the death toll exceeded 1,800 people, making it the third-deadliest hurricane in the nation’s history.

Louisiana bore the brunt of the storm, and was the focus of relief and recovery efforts in the days, weeks and months after.

One of those who arrived in the weeks after the storm was Bill Hardin, an American Red Cross volunteer from Phoenix who was deployed with a team to DeRidder, Louisiana, in the western part of the state.

“It felt kind of like a war zone almost, because just nothing was working,” said Hardin, who normally works as an attorney at Osborne Maledon in Phoenix.

DeRidder is a rural area, and over two weeks Hardin’s team provided basic necessities such as food, water, ice and construction support. One of the most-needed items was ice to keep medicine cool, especially insulin in an area with a high rate of diabetes.

“It was really remarkable how much we take for granted, all the stuff that just works under the surface of things,” he said.

He was also “struck by how patient” the victims were, he said, for people whose lives had just been “turned upside down.” And many had difficult lives to being with.

“We thought of the disaster as being this … one time single event that would happen and we would come in and fix it and it would be over,” Hardin said. “But for a lot of these folks I think it was just kind of one more … thing in a series of things that made their lives harder.”

Back in Arizona, Hardin said his firm and others in the Valley helped evacuees recover important documents and find missing family members, with lawyers often going to the Arizona Veterans Memorial Coliseum where evacuees were housed.

It was months after the storm that Leah McCormack traveled from Arizona to Bogalusa, Louisiana, as a Humane Society volunteer working with a local group, Alley Cat Allies, caring for cats that had been rescued in the wake of Katrina. McCormack, who lived there in a tent for two-and-a-half weeks, is still emotional about her time in Louisiana. “KC,” or Katrina Cat, a rescued cat adopted by Arizona resident Leah McCormack while she was volunteering with the Humane Society in the wake of Hurricane Katrina. (Photo courtesy Leah McCormack)

She remembered walking into an office one day to see a cat crate separated from the rest, with a note that said, “Please play with me I lost my owner.” She was told that the cat had been found next to the body of its owner.

McCormack said many “people were reluctant to turn in their animals, so they just stayed in their houses” rather than be separated from their pets.

“I think the fact that he was left because his owner died to save him was probably the eye-opener for me that something had to change,” McCormack said of the cat she saw that day.

Since then, she has teamed up with the Red Cross and the Humane Society to try to help find solutions for people and their pets during relief efforts. McCormack said she tries to educate people about preparing for disasters and reminds them to include essential items for their pets as well as themselves.

Even 10 years later, it is difficult to say how many Arizonans were involved in the rescue and recovery efforts, at home or in the Gulf.

“The thing about emergency management is it takes the whole community,” said Judy Kioski, a spokeswoman for the Arizona Department of Emergency and Military Affairs.

But for those who did step up, that collective effort is one of the predominant memories of the disaster.

“We are all there for a purpose,” Wiseman said. “It’s just for humankind and making sure everyone is safe, and it doesn’t matter who you are or where you are, we are just going to make sure we do our job right.”

Wiseman said his team, which mainly did water rescues in its two weeks there, rescued more than 400 people in the first days.

“There’s one of the nation’s largest disasters and you’re getting to be part of it, knowing you’re helping people. It doesn’t matter whether they are from Arizona or from Louisiana,” he said.

“It’s just a proud moment … to know what we did there and to see that those people were just as much appreciative for us being there as anybody else,” Wiseman said.

Hardin, who was volunteering on the front lines of a disaster for the first time, said he was amazed by those who responded to Katrina.

“Society is really segmented and there aren’t a lot of places where people, kind of from all walks of life come together and work together on something,” he said of the effort.