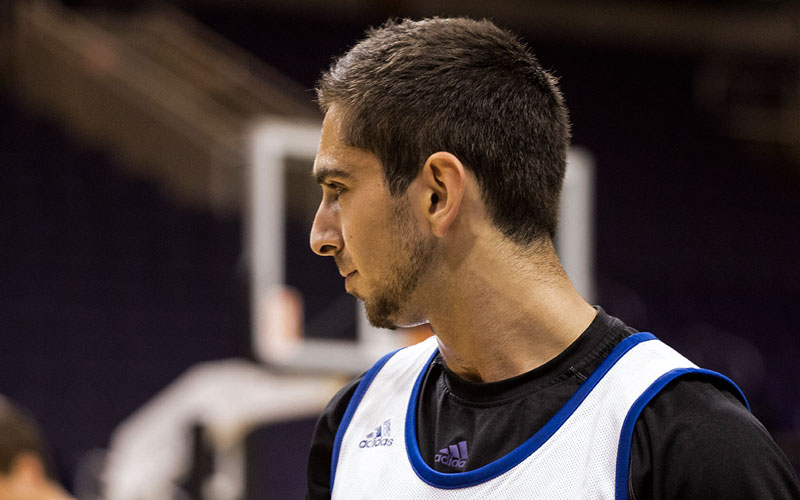 Anthony Tepedino working out with the Phoenix Mercury. (Photo by Cuyler Meade/Cronkite News)

Krauel regularly drives from GCU’s campus to US Airways Center in downtown Phoenix and hits the basketball court.

But the training isn’t for his own benefit. Krauel is helping to train the defending WNBA champions.

Krauel is a member of the Phoenix Mercury’s all-male practice squad, a team of nine men who volunteer about an hour and a half of their time several days a week to help the Mercury prepare for each opponent.

“We want to play against players that are faster than us, stronger than us, bigger than us, and make us go to another level,” Mercury coach and vice president of player personnel Sandy Brondello said. “And nothing against women, but we are the best of the best here in Phoenix, so it makes us as competitive as we can.”

If the members of the practice squad are faster and stronger than the Mercury players, as Brondello says, it doesn’t take much to remind them that they’re playing against some of the best women in the world.

“A lot of practices they’ll practice side out-of-bounds plays, so they’ll run through a specific set with a specific amount of time on the clock just trying to get one look,” Krauel said. “And there’s times where we’re on defense where they’ll run it 10 times in a row and they’ll score nine out of 10 and we can’t stop them. After four or five times we’ll look at each other and be like, ‘OK, let’s get a stop,’ and they’ll still hit it.”

The practice squad was chosen from more than 100 candidates who tried out in May. WNBA rules don’t allow for paid practice squads, though the men receive tickets and occasional gear. They say it’s more than worth it.

“I love being around the professional environment,” said Krauel, who is an assistant coach for the boys’ varsity basketball team at Phoenix’s North Canyon High School in addition to his job at GCU. “Men’s, women’s, doesn’t make a difference. I’m a high school coach, so being able to see the preparation they put in and breaking down sets and getting to see how awesome Sandy and (assistant coach) Jules (Hairgrove) are coaching is a gift for me to be able to learn from them. So that’s a big reason why I come every year.”

Some members of the practice squad come up to Phoenix from Tucson, where they also work with the University of Arizona women’s team. Two of those players, Phillip Barrett and Anthony Tepedino, played high school basketball at Buckeye and Desert Mountain high schools, respectively.

“Not too many people get to play with WNBA basketball players on a daily basis, so it’s awesome,” Barrett said.

The practice squad faces an unusual challenge playing against the Mercury’s 6-foot-8 star center, Brittney Griner, the tallest active player in the WNBA. But that’s a challenge that 6-foot-10-inch Adam Grimes is more than happy to take on.

“I like it. It’s fun,” said Grimes, who played for Division II Western New Mexico. “The girls are fun to talk with. They make it a fun atmosphere; it’s not too intense. When I was in college, men are screaming up and down the court. Girls have fun but they get the job done. It’s a good time.”

The practice squad focuses on simulating the style of play of Mercury opponents. Assistant coach Julie Hairgrove watches film and instructs the men on how to emulate the players the Mercury will see in the next night’s game.

“(Assistant coach) Todd (Troxel) and I do all the scouts on our opponents,” Hairgrove said. “So, like, Minnesota’s going to try and (isolate) so that’s what we’ll have our guys do. Try and get them in the right position, have them try and deny the passing lanes, make it a game-like situation as much as possible.”

Tepedino said this can be challenging, but it comes down to having the right mindset about why they’re there.

“You need to be unselfish,” Tepedino said. “Like, I like to shoot the ball, but say the person I’m emulating doesn’t shoot. I don’t shoot then. You have to learn to adapt to their game. It’s not about showing off your talents, it’s about helping the team win the upcoming game.”

“You can’t come out here thinking you’re going to make the Suns team. You have to know you’re here to help the girls,” Barrett said.

Brondello said that attitude is one of the keys in what they look for at practice squad tryouts.

“They understand what it’s about,” Brondello said. “It’s more about trying to help us prepare. It’s not about them improving their game; it’s more about helping us improve our game. We just look for players that can play within a team system, obviously that have the skills, and that can play different positions for us so they can help us play against different players, that have that versatility.”

Hairgrove agreed, adding that knowledge of fundamentals is another crucial element of a good practice squad player.

“If you just throw a ball out there and they play pickup, it’s hard to coach them in a practice setting,” Hairgrove said. “So a lot of those guys played in college, or they’re now teachers coaching basketball, so they’re looking at it from a learning standpoint.”

Krauel, who has been on the squad for three seasons, sees that experience as crucial to each member’s success with the team.

“I think all of us have a basketball IQ that’s really important,” Krauel said. “There’s guys that come to tryouts that are good ballplayers, really fast, really athletic. But we have to simulate another professional team, so that’s more than just being a hooper. You have to understand spacing and making the extra pass and setting good screens. So I think that’s what the coaching staff is looking for in the practice squad is people that know how to play and aren’t just really athletic and can score, because that’s a dime a dozen. They need people who can execute and can learn, who can pick stuff up on the fly as they teach them.”

Griner said she appreciates the push her team gets from playing against the men.

“I don’t know about everybody else’s men, but our men are pretty spectacular,” Griner said. “They’re really good actually. They’re fast, they’re real quick, they’re always a couple steps ahead of us, so it makes us really react on guarding them in post or on the perimeter.”

Brondello believes the presence of the men makes a major difference in the Mercury’s results.

“Last year, we thought that was the key to our success: our male practice guys,” Brondello said. “They really took us to another level. It improves our execution, because of the speed factor that they have, and it’s really no different this year.”