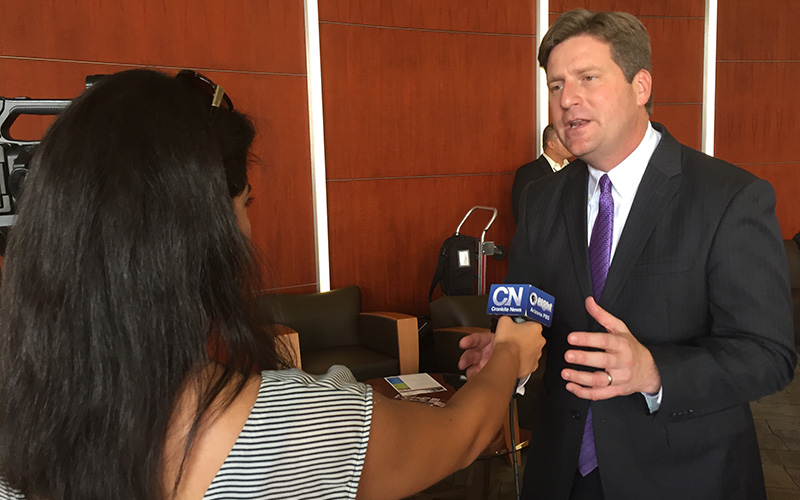 Commuters wait for a light-rail train at a stop in Phoenix. Unofficial returns showed city voters improving an increase in the transit tax. (Photo by Erin Johnson/Cronkite News)

The first benefits of a transit tax increase that was winning approval from Phoenix voters will likely be increased service by Valley Metro’s Dial-a-Ride and more attention to potholes, supporters said Wednesday.

While opponents said Proposition 104 and the billions of dollars it will raise over 35 years would benefit only a small percentage of residents, Mayor Greg Stanton said improvements to public transportation will help everyone by providing better access to education and jobs.

“What happened last night, the overwhelming support by the people of the city of Phoenix, was a showing of a belief in ourselves, a belief in our future,” Stanton said at a gathering of Proposition 104 supporters and others.

The proposition, which was winning by a wide margin in unofficial returns, calls for raising the portion of city sales tax going toward transportation from 0.3 percent to 0.7 percent for 35 years. It will fund $31.5 billion in improvements to light rail, bus service, roads and more.
Stanton said improving the transportation system will provide better access to community colleges and universities throughout the Valley.

“Millions of young people will have the opportunity for a higher education,” he said.

Councilwoman Kate Gallego said priorities under the tax increase, which takes effect Jan. 1, include creating a light-rail stop at the Disability Empowerment Center in east Phoenix, buying additional buses and adding bus stops. Light rail is a regional partnership requiring approvals from other cities before moving forward, she noted.

In the near term, Gallego said, residents will see better attention to potholes and other road-improvement needs.

“It’ll be quicker to do the things that don’t require new equipment,” she said.

Matthew Kenney, chairman of Taken for a Ride Committee, one of the groups opposed to Proposition 104, said in a telephone interview that the city should be looking for innovative ways to improve transportation rather than relying just on bus and light rail.

“It doesn’t make any sense to put in the giant light rail and the huge expense it’s going to cost when cities around the United States are talking about how poorly their light rail and trolley systems are working,” he said.

Stanton, who pushed for the transportation improvements under the banner MovePHX, said the City Council will begin planning next steps at a Sept. 8 policy meeting.

“We have to move forward as quickly as possible to show that we can deliver on what the people supported last night,” he said.