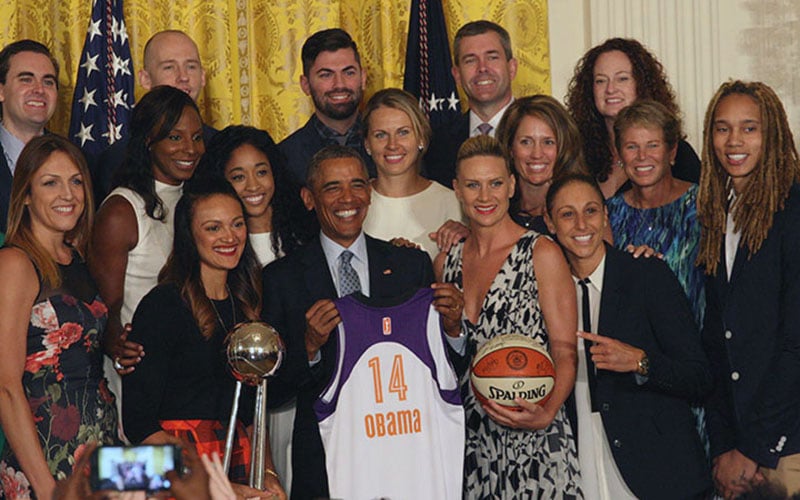 Phoenix Mercury players present a customized team jersey Wednesday to President Barack Obama during a White House visit when they were honored for their 2014 WNBA championship. (Photo by Charles McConnell/Cronkite News) 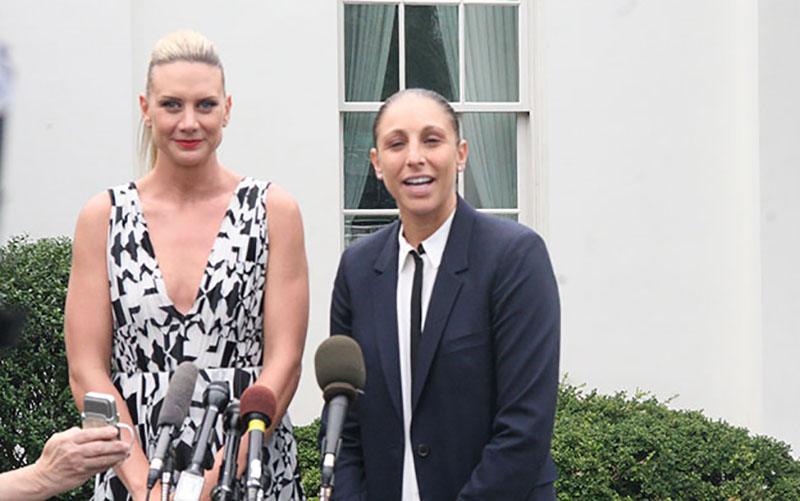 Phoenix Mercury players Penny Taylor, left, and Diana Taurasi after being honored at the White House. Taylor said the only thing missing from the visit were the team’s loyal fans. (Photo by Charles McConnell/Cronkite News) 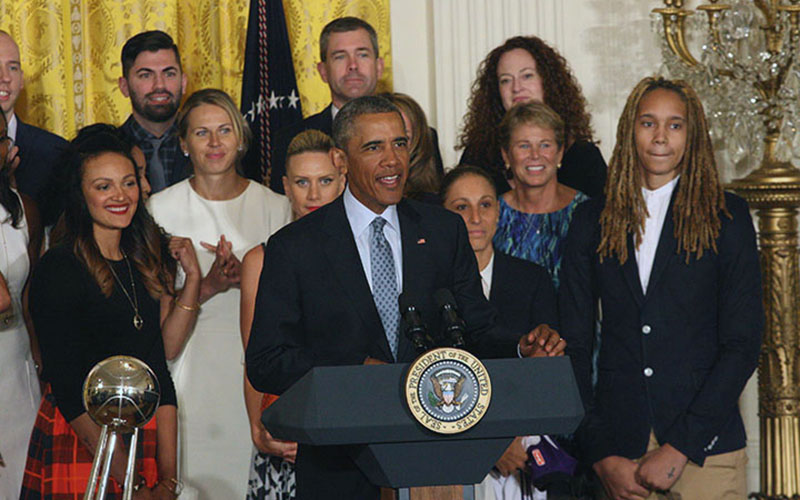 President Barack Obama praised Mercury players for their service to the community – even though, he joked, they beat his hometown Chicago Sky to win the 2014 WNBA championship. (Photo by Charles McConnell/Cronkite News)

WASHINGTON – Even star athletes can get awestruck.

“It’s just overwhelming when you’re in the room with the president of the United States,” said Diana Taurasi, a three-time U.S. Olympian and the Phoenix Mercury’s star guard. “These are moments that you’ll cherish, you know, for the rest of your life.”

The moments she was referring to were the Mercury’s visit Wednesday to the White House, where President Barack Obama honored the team for its 2014 WNBA championship.

Meeting the president is a time-honored tradition for most sport champions, but Obama has expanded the practice to cite teams for their community service as well. On Wednesday, he highlighted the players’ efforts to clean up neighborhood courts, run basketball clinics for the underserved and raise awareness for the national bone marrow donor registry.

“So this is a team that I think is representative of what the WNBA is all about,” Obama said during a brief midday ceremony in the East Room. “They’re doing good in their community. They’re great athletes. They and women across the WNBA are changing the way that young girls, including my daughters, see themselves.”

Wednesday’s event came on the 95th anniversary of the ratification of the 19th Amendment, which gave women the right to vote, which Taurasi and forward Penny Taylor were asked about after the ceremony.

“There is equal opportunity for everyone to get where they want to be with hard work and a lot of passion,” regardless of gender, Taurasi said in a stakeout outside the West Wing after the event.

During the ceremony, Obama joked that in order to get to the White House the Mercury had to beat his hometown Chicago Sky last year, sweeping the series to claim their third title in eight years.

“You have kept yet another Chicago sports team from getting into the White House,” Obama said, before accepting a customized Mercury championship jersey from the players.

The Mercury will not be able to savor their White House visit for long. The team heads to Connecticut on Thursday to take on the Connecticut Sun before returning to Washington for a Friday game against the Washington Mystics.

The Mercury, who posted a 29-5 record last year, are currently 16-11 but that’s still good enough to make them one of just two teams to have clinched a playoff spot this season. The team has seven games left in the regular season, which it is playing without Taurasi who is sitting out this season per the request of her team in Russia.

In addition to winning the most games in league history last year, the Mercury also had the highest average attendance in the WNBA during the 2014 season. Players said Wednesday’s White House visit could only have been improved by the presence of the team’s loyal fans.

“I wish we could have packed ’em all and brought ’em,” said Taurasi, the most valuable player in both the 2009 and 2014 finals.

“They were such a huge part of our championship – all our championships,” said Taylor, who scored the last two points of the 2014 finals. “We really wish they could have been here to experience it with us.”

Taurasi has visited the White House several times, with the Mercury and with the University of Connecticut where she played college ball, but she said it’s still a special experience for her.

“When he (the president) calls you by your first name, everything kind of just stops,” Taurasi said. “I still feel like a little kid.”

President Barack Obama honors the Phoenix Mercury in a ceremony in the East Room of the White House on Wednesday. (Video by Elizabeth Blackburn/Cronkite News)