Interns packed a Senate building for the American Petroleum Institute’s snow cone event, hearing from API’s president and Rep. Rob Bishop, R-Utah, while getting some treats. (Photo by Nick Wicksman) 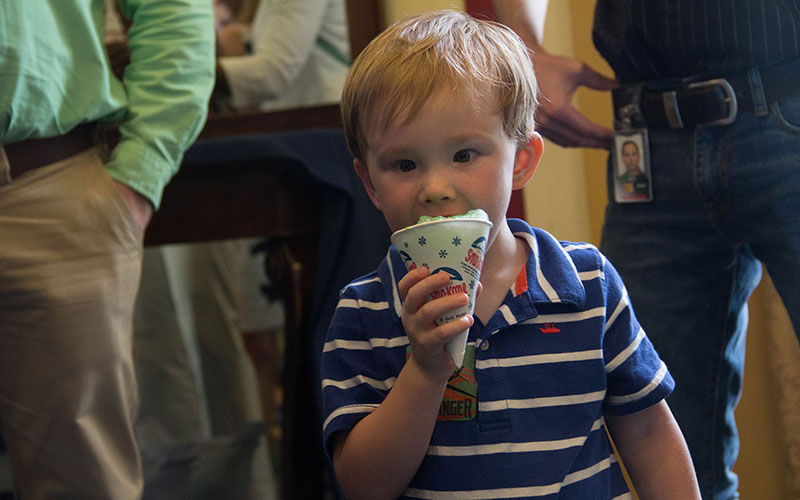 Not everybody who shows up at a Capitol Hill reception is a lawmaker – or even an intern. But sponsor groups say they’re OK with that, since the goal is to reach as many people as possible. (Photo by Nick Wicksman)

WASHINGTON – August in Washington means a few things – Congress is out on recess, the city is slowing down and the tourists are heading home.

And the interns have to start buying their own food.

One of the perks of being a Capitol Hill intern is the abundance of free food that a savvy “Hilltern” can glean, between the many receptions, events and lunches held when Congress is in session.

“I would say I spend less money on food than I do on dry cleaning here,” said Joseph Carlstein, a Hill intern enjoying a snow cone at an American Petroleum Institute event recently.

From the necessary summer snow cone social to the Chick-fil-A catered luncheons – washed down with product from the National Beer Wholesalers Association, for those of age – interns and congressional staffers have an abundance of free food opportunities open to them.

So while interns elsewhere are eating ramen noodles and home-packed lunches, Hillterns may be eating hot dogs with former Major League baseball players one day, courtesy of the North American Meat Institute, and eating veggie burgers from an animal-rights group the next.

“I know, there’s a lot of free food on the Hill,” Carlstein said.

The food can be a break from the monotony of a congressional intern’s daily routine – sorting through mail, giving tours of the Capitol to constituents and answering phone calls.

There are other benefits – gaining political experience, making connections and interacting with politicians. And the abundance free food.

The events come with some fine print. They are often hosted by special-interest groups looking to push their agendas in Washington.

The People for the Ethical Treatment of Animals is one of the groups that frequently hosts free food events on the Hill in an effort to inform attendees about their cause.

PETA recently hosted its annual veggie dog luncheon on the Hill and called it a “hit” among the interns.

“We send out invitations to Congress members and their staffers, so of course that includes interns,” said Stephanie Jaffa, a senior policy associate at PETA.

Even though the interns’ bosses may be the primary target of the events, interns are still welcome – and expected.

“I think young people are a really fantastic audience for this message,” Jaffa said of PETA’s event.

And while the food is the lure, the message is also often consumed along with the snow cones and the veggie dogs.

“I think the free food definitely brings people to it, but everyone stays longer to hear the information,” said one intern at the American Petroleum Institute social who – this being Washington – spoke on background.

She was at the API event with Carlstein, who said that in a month as an intern he managed to attend more than a half-dozen events offering free food – most of them also pushing information about legislation.

At API’s “50 States of Energy” social at the end of July, the snow cones were provided along with state-by-state oil and natural gas information for interns and staffers.

“It’s great to get information, even if it’s a perspective I don’t agree with,” said the woman with Carlstein.

With Congress out of town, the food-fests have mostly stopped, leaving interns with both waistlines and minds expanded as they head home.

“Of course the free food is wonderful,” Carlstein said. “But a lot of these events have also got a really interesting perspective on new bills and new policies that are being proposed.”