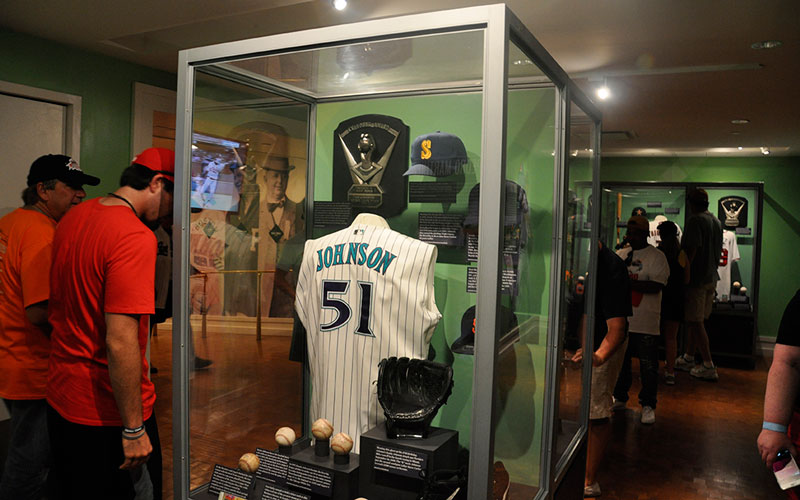 Randy Johnson’s 4,875 strikeouts are the second most in MLB history and are commemorated in his display in the National Baseball Hall of Fame. (Photo by Tyler Freader/Cronkite News) 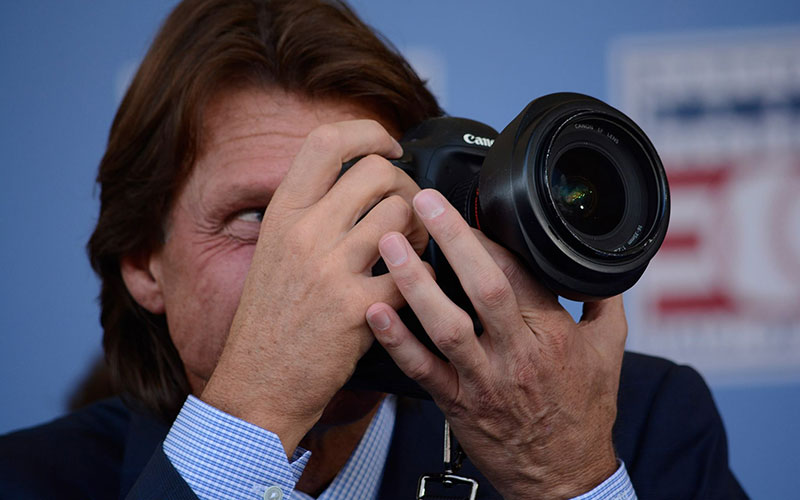 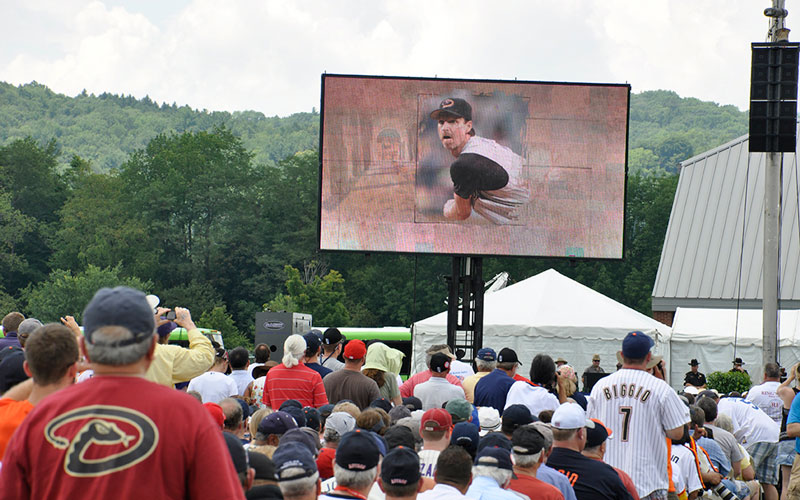 Thousands of fans showed up to the induction ceremony on Sunday, some setting up chairs and claiming spots more than 24 hours in advance. (Photo by Tyler Freader/Cronkite News)

Johnson’s enthusiasm for pitching would eventually shake the nails in the garage door loose.

“My dad would come out after about a half an hour with a hammer, put the hammer down and say, ‘When you’re done playing catch against the wall, make sure you pound all those nails in,'” Johnson said in his Baseball Hall of Fame induction speech Sunday.

Johnson continues to be a resource for D-Backs

During the 18-minute speech, Johnson opened up about his personal life, telling stories of how his parents supported him in his younger years.

“He also took the time, as a police officer, when his shift was over to come in his police uniform and watch me pitch in high school,” Johnson said of his father, who passed away in 1992, after Johnson’s third season with the Seattle Mariners. “I’ve never forgot those moments.”

Johnson was known for being one of the most, if not the single most, intimidating pitchers to ever step on a mound, but when speaking of his family’s impact on his young life, the 6-foot-10-inch Hall of Fame inductee had trouble holding back emotion.

“Then there’s my mom, the backbone to our family,” Johnson said. “She raised six children and still had a full-time job and came home and fed us and took care of all of us.”

“Thank you mom, you’re the Hall of Famer.”

Of Johnson’s 22 years in the major leagues, 18 were either spent in Seattle or Phoenix.

In 2001, Johnson won a World Series with the Diamondbacks and was named co-MVP.

Sunday, Johnson became the first Hall of Fame inductee to be enshrined with a Diamondbacks hat on his plaque.

“It goes up there as one of our biggest points of pride, that’s for sure,” said Diamondbacks President and CEO Derrick Hall prior to the plaque’s hanging. “Now the reality has set in and I couldn’t be prouder at this time to know that (Johnson’s) going to have a plaque that will be installed (Sunday) afternoon in the National Baseball Hall of Fame.”

Johnson’s achievements in the desert have helped bring attention to a franchise that doesn’t receive a large portion of the national spotlight.

“I think there’s certain accomplishments that draw attention from baseball fans and media members nationally,” Hall said. “And that’s, obviously, winning a championship, which we did in 2001, and it’s making it to the playoffs, as we have several times.

“But I think that having a player enshrined into the Hall of Fame brings in instant credibility, as well, to your history and to the level of talent that you’d have wear your uniform.”

Though Johnson’s speech changed tones throughout, the biggest laugh came when Johnson shared some self-deprecating humor with the fans in attendance.