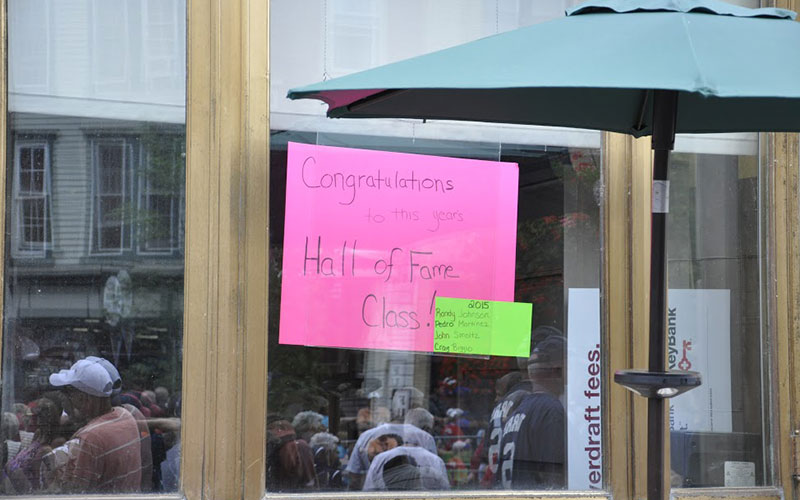 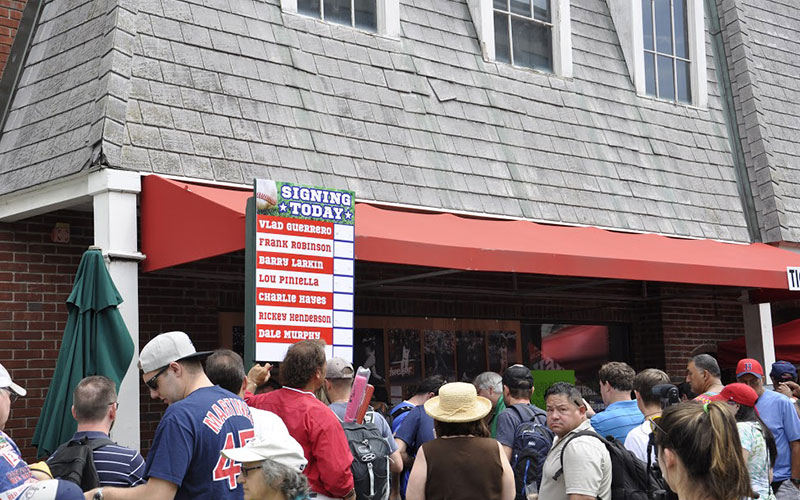 Fans from across the country pack the streets of Cooperstown, New York, on Hall of Fame Weekend. (Photo by Tyler Freader/Cronkite News)

As Randy Johnson, Pedro Martinez, John Smoltz and Craig Biggio join baseball’s all-time greats in the Hall on Sunday, fans are packing Cooperstown’s stores and loading its streets, creating an atmosphere strikingly similar to a baseball stadium, just without the game.

One-time Flagstaff resident Brendan Devine, a lifelong Diamondbacks fan who is in town for Johnson’s enshrinement, said Cooperstown did more than just look the part.

“It smells like a ballpark walking down the street here, which is incredible,” Devine said. “It’s amazing to see this many baseball fans all together.”

Johnson continues to be a resource for D-Backs

Devine, who now lives in Illinois, said the prospect of seeing Johnson’s induction was too good to pass up.

Diamondbacks fans Eloisa and Evan Gressler, a mother and son who traveled from Tucson to Cooperstown for the weekend’s festivities, have been awaiting the visit for quite some time.

“We planned the trip when we found out that Randy was going to be inducted,” Eloisa said. “We traveled so far and I thought, ‘let’s just do it’.”

“It’s the All-American thing to do.”

Charlie Miller and his grandson, Zack Slepian, Diamondbacks fans from Scottsdale, flew into Albany from Phoenix before making their way to Cooperstown.

“People like to talk. They all like to talk baseball,” Miller said. “We sit here and people just stop and talk. It’s just fun.”

Cooperstown has been hosting the induction ceremony since 1939, when baseball legends including Babe Ruth, Ty Cobb and Honus Wagner were enshrined.

The museum brings in nearly 300,000 people a year, whether they are celebrating the baseball heroes of the past or the stars of the present.

“It’s really strange,” said Chris Doucas, Cooperstown resident and owner of Tickled Pink BBQ. “Most days you can sit in the middle of the street in the winter time, and then when you see an influx of people like this, you feel like you’re at Disney or something. You’re somewhere else.”

Paul Quhn, a 20-year Cooperstown resident, estimated that the amount of fans he saw on Saturday was more that what the town usually sees on Hall of Fame weekend.

“Compared to other years, this is a pretty good one,” Quhn said. “I’d say it’s a little above average.”

“Everybody remembers when Cal Ripken Jr. and Tony Gwynn were inducted (in 2007) as being the largest, but there have been several that have been quite large,” Quhn said. “(Ripken) played his whole career in Baltimore, so I think half the city of Baltimore came here.”

Though baseball may not dominate the sports-news landscape like it did years ago, when the time comes to induct new members into the National Baseball Hall of Fame, baseball takes center stage.

“To me it’s the weekend where baseball has its place,” Quhn said. “It’s all about baseball this weekend.”