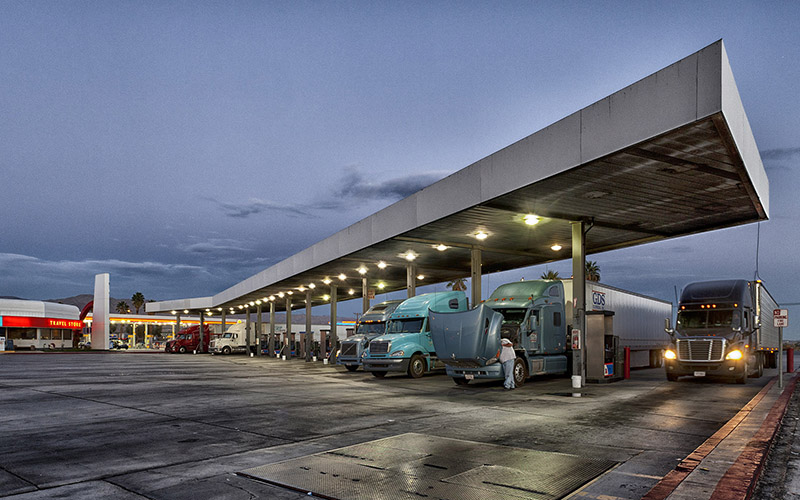 A Interstate 10 truck stop in Coachella, California. Businesses along the closed portion of the road from California to Arizona saw a sharp drop in business this week. (Photo by Randy Heinitz via flickr/Creative Commons)

WASHINGTON – Interstate 10 reopened Friday after a five-day closure, but not soon enough for businesses in western Arizona and eastern California that depend on the highway.

The interstate was closed Sunday after the eastbound span of the Tex Wash Bridge washed out in a rainstorm, severing a major link between the two states.

Its reopening Friday came weeks earlier than had been expected, but the closure still had major impacts on trucking services and businesses in the region as traffic was rerouted hundreds of miles out of the way.

“They closed both sides (of I-10), so there was nobody coming through,” said Martin Gamez, general manager of the Denny’s restaurant in Blythe, California, a town along the closed section of the road that usually carries 27,000 vehicles a day.

“The detours were far from our town, so they never got through here,” Gamez said, estimating that his business fell by more than 75 percent this week.

The detours affected those driving the road as well as those situated by it: The Arizona Trucking Association, citing numbers from the American Transportation Research Institute, said the I-10 closure cost the trucking industry an estimated $2.5 million per day.

The two major detours recommended by the California Department of Transportation for those traveling from Arizona to California took drivers about 180 miles out of the way on the northern detour or a 290-mile detour to the south.

Gamez compared sales from Sunday night, when the bridge collapsed, through Friday afternoon when the interstate re-opened. On any average week, Gamez said his Denny’s gets 4,000 to 4,500 customers, but only averaged about 200 customers per day this week.

“The impact was really substantial on all of us here in town,” he said Friday.

Gamez said he was forced to cut his workers’ hours to make up for the lost income.

“It was impactful for everybody,” he said. “Especially on the employees because those are the ones who get hourly pay and tips.”

Had the highway remained closed for as long as originally feared – many weeks – Gamez would have lost thousands of customers, and truckers would have lost an additional $75 million, the Arizona Trucking Association said.

But even though the road opening is welcome, Arizona Trucking Association President Tony Bradley said truckers aren’t in the clear yet.

CalTrans only reopened the westbound span of the Tex Wash Bridge, which will carry two-way traffic until the collapsed eastbound span can be fully repaired. That could create a bottleneck at the Tex Wash.

Bradley said many truckers will probably still use the detours to avoid backups.

“Truckers don’t want to sit in traffic,” he said. “I suspect they will continue to use the detours until traffic is gone.”