Partially hydrogenated oils, or trans fats, show up in a number of popular foods. But the food and Drug Administration has determined their health risks outweigh their benefits and is phasing them out over the next three years. (Photo courtesy FDA) 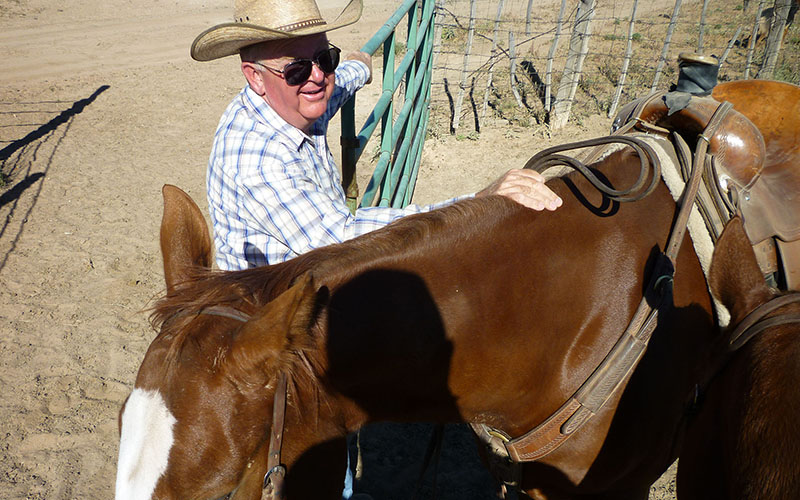 St. Johns rancher Jay Platt say he and his wife avoid trans fats in their foods – but that doesn’t mean the government has the authority to ban the fats. But the Food and Drug Administration is doing just that. (Photo courtesy Jay Platt)

The 64-year-old checks labels on his food, raises his own beef and grows and cans vegetables with his wife, Tricia. Together, he said, they stay away from pre-packaged foods.

But that doesn’t mean government bureaucrats can tell him he can’t have trans fats in his food, Platt says.

“While I have always avoided trans fats, I do not believe the FDA, USDA or any other federal administrative agency has any authority to mandate such bans, nor should they be in the business of doing so,” Platt said in response to a query from the Public Insight Network.

But the FDA is doing just that. Cronkite News reporters want to hear your stories. Through partnership with the Cronkite Public Insight Network Bureau, we will reach out to ask for input on stories. Click here or on the graphic to share your perspectives.

The Food and Drug Administration said last month that it plans to ban trans fats in most foods, giving companies until 2018 to reformulate their products or petition the FDA to allow the continued use of trans fats in their foods.

In making the announcement, FDA officials said that trans fats contribute to plaque buildup inside arteries, and that taking trans fats out of the nation’s foods will reduce the risk of heart disease.

The final rule came two years after a preliminary determination by the FDA that hydrogenated oils, which are the primary source of artificial trans fats in foods, were not “generally recognized as safe” for consumer use.

Businesses and restaurants that will be most directly affected by the change have largely seen it coming and started to step away from trans fats in the last couple of years, said Steve Chucri, president and CEO of the Arizona Restaurant Association.

“So many restaurants have already eliminated trans fats from their menus … and you’ll see many more do so as we get closer to 2018,” Chucri said. “So many times we beat the market in terms of altering our menus.”

Tom D’Ambrosio, chef and co-owner of Aioli’s Gourmet Burgers, said the ban won’t affect his food truck business because he and his partners don’t use trans fats in their food. His trucks operate in Phoenix and Scottsdale.

He said the ban might affect other food truck owners who do use hydrogenated oils, but that most are gourmet trucks that would be unlikely to use trans fats.

“The industry is way ahead of the game,” D’Ambrosio said. “Many have started to pull away from hydrogenated oils already.”

He said the industry could be hit with higher material costs down the road, as food manufacturers “have to change up some of their processing.” But he didn’t think it would have a big effect.

“Ultimately prices are probably going to increase for us in the long run,” he said. “But overall, people are willing to pay for something that they know is healthier and better for them.”

The health benefits of the FDA ban were cited by supporters who responded to the Public Insight Network query, with several saying it’s the agency’s responsibility to look out for citizens.

“The FDA’s first priority should be the safety of American citizens,” Lynn Dorsett wrote on the PIN query. “Why do we have an FDA if they don’t look out for citizens?”

Nancy Brown, CEO of the American Heart Association, welcomed the ban, calling it “truly a historic victory for the nation’s health.”

“After years of advocating for the removal of industrially produced trans fat from the country’s food supply, we couldn’t be more gratified that this day has finally come,” Brown said. She said the ban “may prevent 10,000 to 20,000 heart attacks and 3,000 to 7,000 coronary deaths each year.”

But critics say that whether trans fats are bad or good for consumers and their health is for consumers to decide – not the government. And they said that consumers are already making their preferences known.

“Trans fats have gone out of style and consumption has dropped by 85 percent, as consumers have shunned them,” said Walter Olsen, a senior fellow at the Cato Institute. “The public is also perfectly capable of recognizing and acting on nutritional advances on its own.”

Olsen said that “government doesn’t always know best” and neither do its friends in public health.

Platt agreed. Besides, he said, in his eyes the FDA doesn’t have such a great track record on healthy eating to begin with.

“The trans fat issue became such because of government action when it began to advise people to avoid fats such as butter, whole milk, eggs, etc.,” Platt said. “I didn’t heed government advice then… I continue to drink whole milk and eat eggs.”

EDITOR’S NOTE: Sources in the Public Insight Network informed the reporting in this story through a partnership with the Cronkite PIN Bureau. To learn more or share your story, click here.