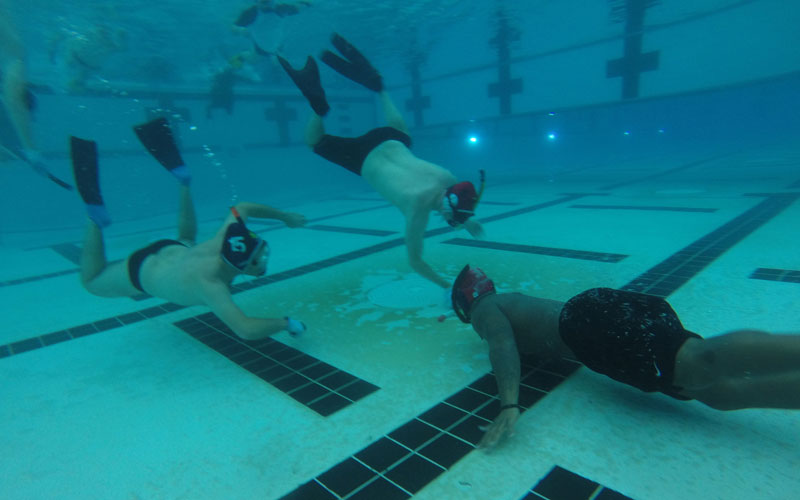 The Phoenix Underwater Hockey Club plays hockey 7 feet below the surface of the pool. (Cronkite News photo by Kristen Carver via GoPro)

A moment later, they disappear, their users in pursuit of a heavy object at the pool’s bottom.

The underwater athletes, short sticks in hand, attempt to move that heavy object toward a net that is 7 feet below the surface.

They are playing hockey, but instead of ice, their playing surface is the bottom of a pool.

“It’s a lot more exciting than swimming laps,” Cleveland said. “The team aspect of the sport combined with being in the water is so much fun.”

Player Ian Cleary had never heard of the sport until he moved to Phoenix two years ago.

Cleary said the standard response is, “Underwater what?”

The coed sport is played with teams of six in a 25-yard pool. The game is similar to ice hockey, in which teams push, pass and move around a puck toward the opposing team’s goal on the opposite end of the playing area.

The main difference is that it is noncontact and is played under water. Players are equipped with snorkel gear, fins, a protective glove and an 8-inch hockey stick.

“Once you get comfortable with the gear and are comfortable in the water, you start having a lot more fun,” Cleveland said.

The sport requires players to hold their breath for short periods of time while pushing a 3-pound puck before passing to a teammate and returning to the surface for air.

“It’s a lot about timing and getting to know your teammates,” said Ruth Wylie, a professor at ASU’s Mary Lou Fulton Teacher’s College. “You can’t talk underwater so it is very team oriented.”

According to Wylie, each player is underwater for about 10 seconds at a time.

Miller said he is not a big fan when it comes to holding his breath.

“My favorite part is when you see somebody who thinks they are going to score and you can come down and take it at the last minute,” Miller said. “There’s no topping that.”

Wylie said the club features a wide range of playing abilities because it has everything from national-level players to people trying the game for the first time.

Last month, Phoenix competed against 23 teams in the Underwater Hockey National Tournament in California. The team took home first place in the C division after playing 13 games in three days at the Santa Clarita Aquatic Center.

Michael Bull joined the club a month and a half ago and fell in love with the sport immediately.

“I am really glad I got this experience and I am definitely going to keep going on it,” Bull said.