About half of the more than 1,000 youth at the White House Tribal Youth Gathering wore traditional tribal clothing. More than 230 tribes from across the country were represented. (Photo by Aubrey Rumore) 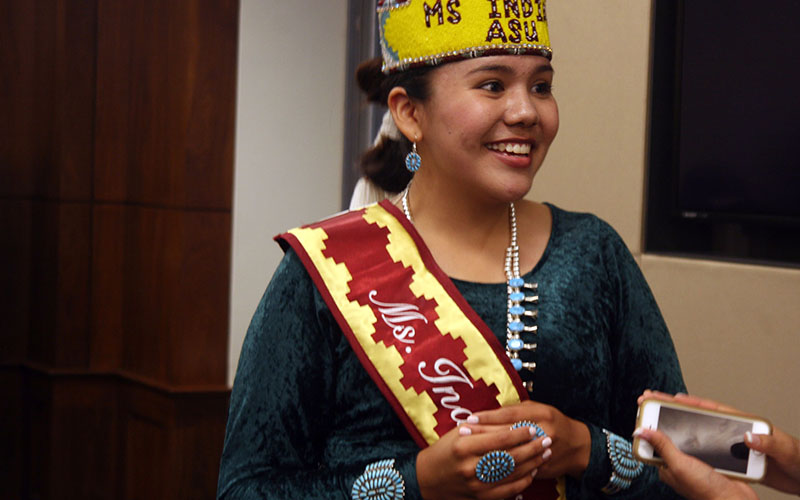 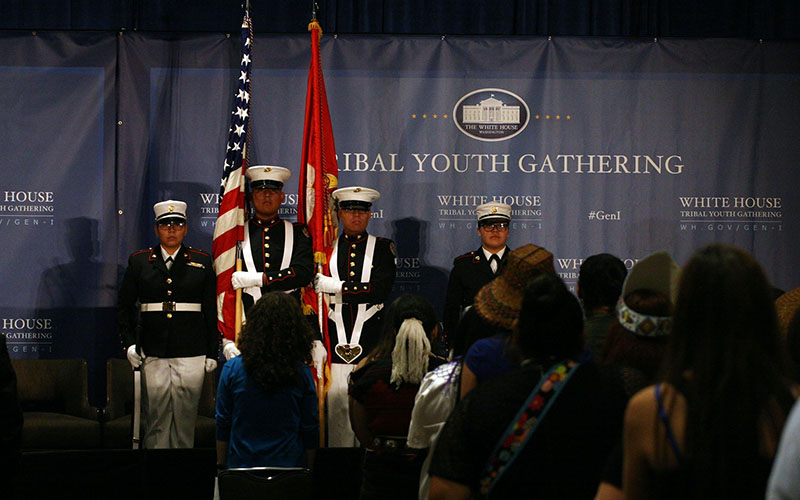 A color guard from the Tuba High School Marine Corps JROTC presented the colors to kick off the White House Tribal Youth Gathering on Thursday. (Photo by Aubrey Rumore) 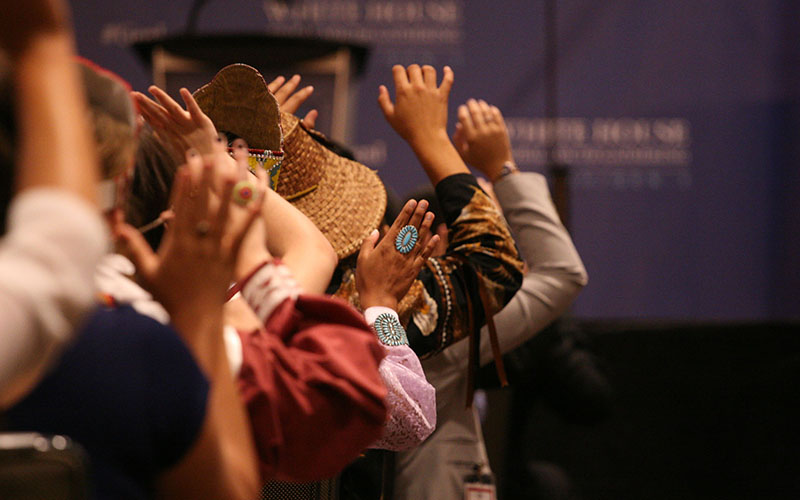 Navajo teen Brooke Overturf’s hand can be seen in the center of the picture with a turquoise ring that belonged to her grandmother. She later gave it, or an identical ring from her left hahd, to first lady Michelle Obama. (Photo by Aubrey Rumore) 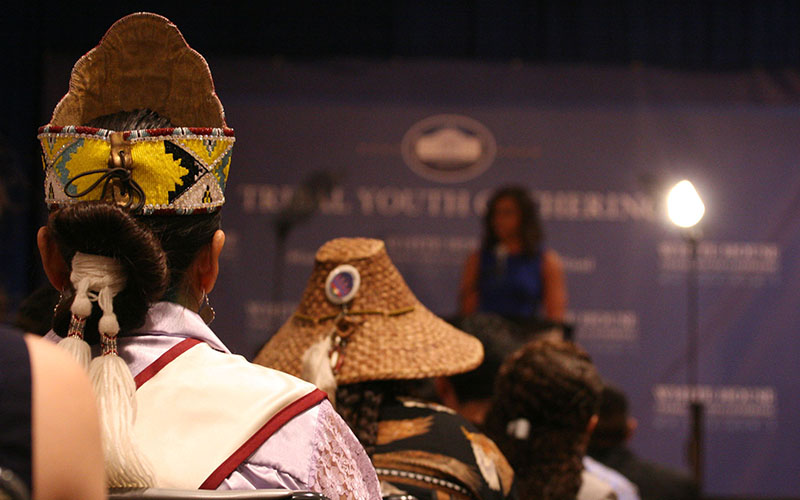 Brooke Overturf, in yellow headpiece, watches with other tribal youth to an address from first lady Michelle Obama. Youth like Overturf, 19, a Navajo, had to perform a community service project to be invited to the gathering. (Photo by Aubrey Rumore)

WASHINGTON – Brooke Overturf of Window Rock was momentarily flustered as she stood holding hands Thursday with Michelle Obama, while hundreds of other Native American youth crowded around, hoping for a handshake.

But the Navajo 19-year-old quickly recovered and pulled a turquoise ring from her hand to give to the first lady.

“I told my mom last night that if I met her (Obama) I was going to give her my ring. I gave her a ring my grandmother gave me,” said Overturf, emerging from the crowd one accessory shy of when she went in.

From AZ to DC

Overturf was one of more than 1,000 Native American youth representing more than 230 tribes from across the country who had come to Washington for what organizers were calling a “historic” first White House Tribal Youth Gathering. Dozens of youth from Arizona were at the event.

President Barack Obama had called for the meeting in April as part of his Generation Indigenous, or Gen-I, initiative.

The event brought together Cabinet secretaries and elected officials – and the first lady – for speeches and small-group sessions to discuss issues in Indian country and share their stories with tribes and various federal officials.

“Your cultures, your values, your discoveries are at the heart of the American story,” Obama told the cheering gathering, but she said tribes rarely receive credit for their contributions.

But the gathering was less about history than it was about finding solutions to current problems on tribal lands. Most Native youth, including those at the gathering, face what Attorney General Loretta Lynch called “tremendous” challenges.

“Many Native American children suffer post-traumatic stress similar to the level of veterans who have come home from Iraq and Afghanistan,” Lynch said.

For a long time the federal government has tried to “prescribe how the nations should live,” but Lynch said the U.S. government needs to recognize that tribal decisions are best left to the tribes.

“You have to lead, and we have to be your partners,” said Health and Human Services Secretary Sylvia Burwell, not the other way around.

Lynch, Burwell and other speakers encouraged the youth there to raise their voices. Lynch noted that “when it comes to civil rights and human rights,” young people have the “determination” to generate change.

“Every movement in this country has really been fueled by the energy of young people,” Lynch said.

The young people at the event had to be involved in order to get invited: The gathering was open to Native Americans ages 14-24 who had took the Gen-I challenge to create and document a project in their communities.

For Overturf, that meant organizing a free basketball camp on the Navajo Nation, recruiting help from a former women’s basketball player at Arizona State University, where Overturf is Miss Indian ASU.

She got her invitation in May and had help getting to Washington from ASU and from various sponsors. But many youth had to raise funds to make the trip.

“I know it was a challenge for a lot of Native youth to get here,” said Elton Naswood, a Navajo who works at HHS’ Office of Minority Health Resource Center in Washington.

Overturf said she reached out to other Navajo youth and other youth through the Indian community at ASU before making the trip.

“I could easily go by myself, but I am representing them too,” said Overturf, who routinely reminds tribal youth to “be proud of who you are and where you came from.”

Youth at the event were lauded by the Washington officials who turned out Thursday.

“You’re pioneers,” Interior Secretary Sally Jewell told those who made it to the “first-ever White House tribal youth gathering.”

Despite all the hardship she sees on reservations across the country, Jewell said she has “great hope when I get out into your communities and I meet young people.”

“You have much more wisdom than you may give yourself credit for,” Jewell said.

That was echoed by Sen. Heidi Heitkamp, D-North Dakota.

“We know one thing is for certain,” Heitkamp said. “We must involve youth.”

Despite the emphasis on self-reliance, however, the U.S. government still has to play a role in the betterment of Indian country, Heitkamp said.

“If by the time I’ve left office we have not changed opportunity, education, safety and healthcare on Indian reservations, then I have done nothing,” she pledged to the crowd.

The comments were well received but Mrs. Obama was clearly the star of the show.

“Every single one of your lives is precious and sacred,” Obama said. “And you definitely have a president and a first lady who have your back.”

Overturf approached the event seriously – but was giddy over her encounter with the first lady.