Sen. Jeff Flake, R-Arizona, estimates he’s played in about 15 games, which he called “just one of the best insitutions in Congress” for the camaraderie it helps foster. (Photo by Nihal Krishan) 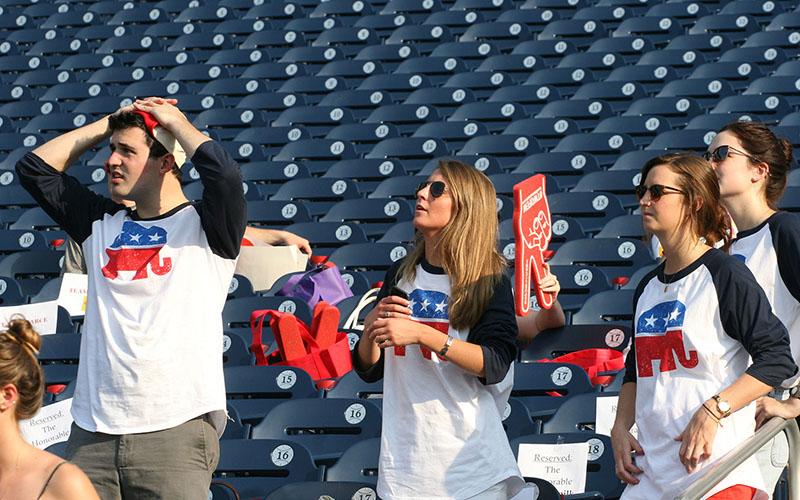 The crowd at the game sat on one side of Washington Nationals Park or the other depending on party, with few sitting in the middle. (Photo by Nihal Krishan) 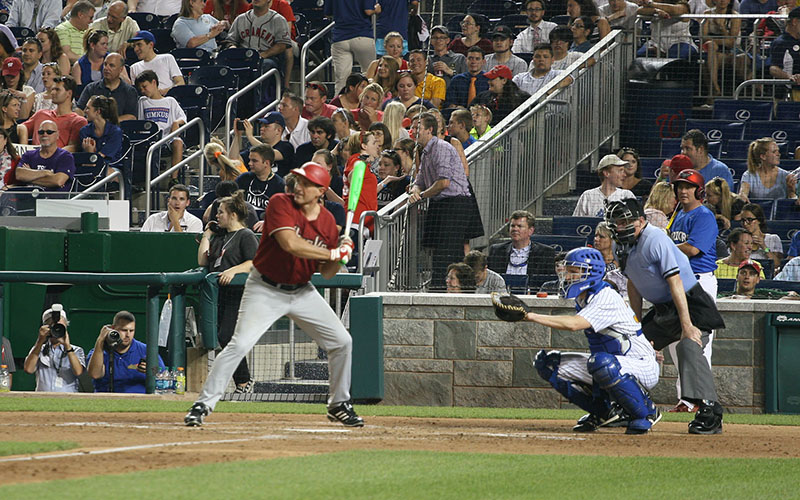 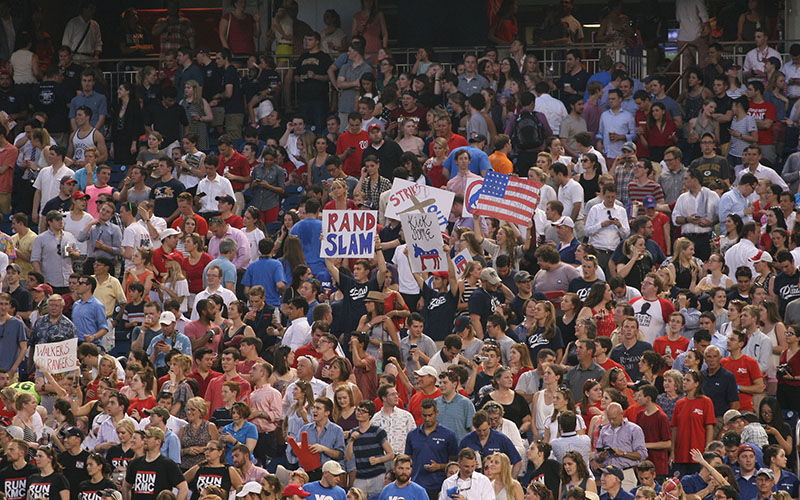 An enthusiastic crowd – Republicans on one side of the ballpark, Democrats on the other – brought political signs and baseball passions to the game. (Photo by Nihal Krishan) 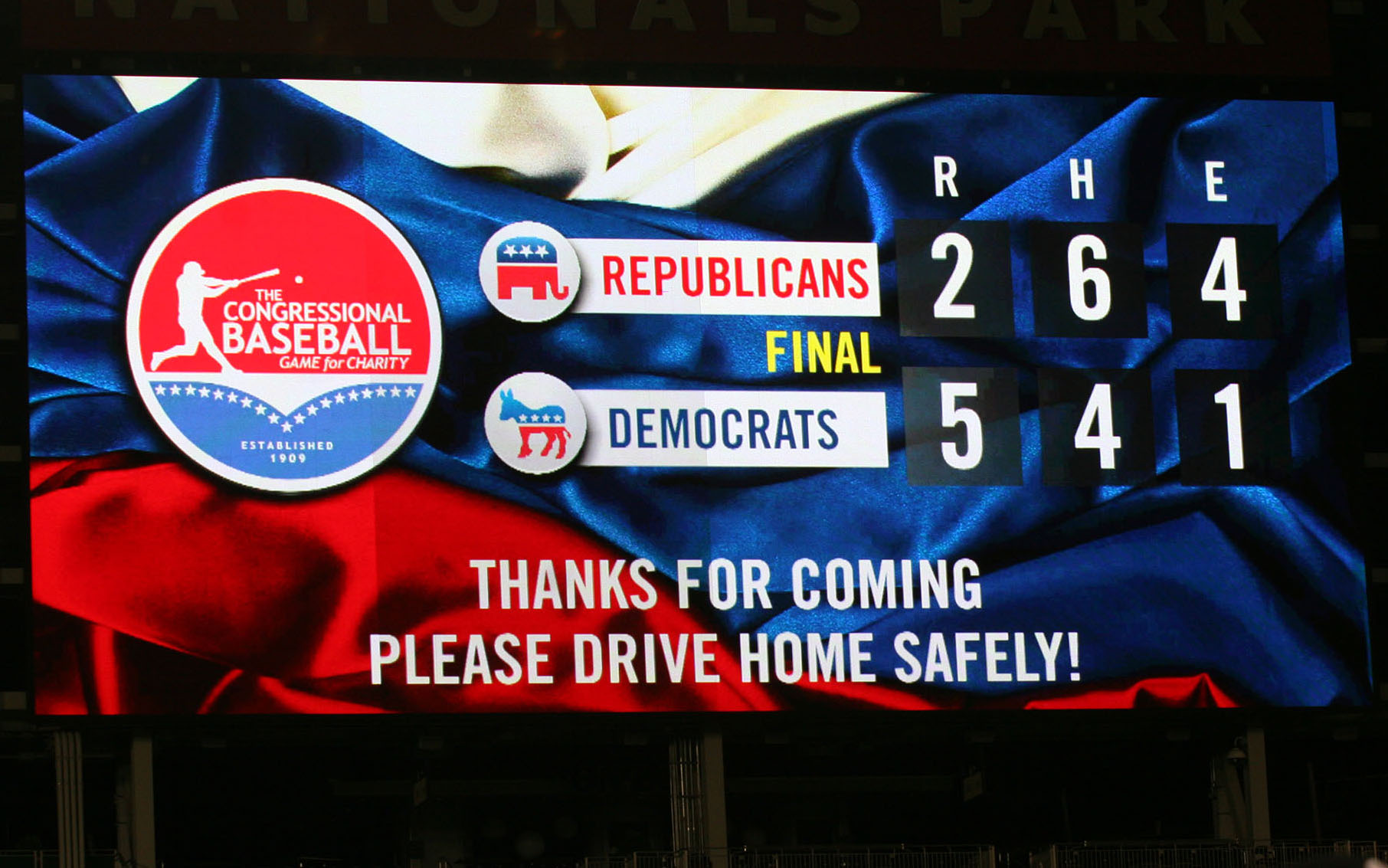 Democrats’ win in the annual congressional charity baseball game was their seventh straight victory in the series. (Photo by Nihal Krishan)

WASHINGTON – For months, a group of Republican congressman and senators gathered at the crack of dawn at an undisclosed Northern Virginia location, hoping to find a way to reverse a string of losses at the hands of Democrats.

Democrats have dominated the past six years of the annual congressional baseball game, a charity event that allows Washington lawmakers to share a little camaraderie – even as they take sides on the field.

The two parties met again Thursday night at Washington Nationals Park in front of a frenzied crowd of several thousand fans, who sat neatly divided into Republican and Democrat camps, in red and blue, respectively.

This being Washington, no fans were allowed to sit in the middle.

“It’s very competitive, but it’s a bipartisan event in the end – we raise money for boys and girls clubs and orphan kids,” said Sen. Jeff Flake, R-Arizona, starting center fielder for the Republicans. “It’s just one of the best institutions in Congress, really it is.”

The event raised more than $300,000 for the Washington Literacy Center, the Washington Nationals Dream Foundation and the Boys and Girls Club of Greater Washington, organizers said.

Flake, who thinks this was about his 15th game, was predicting victory for Republicans, who won the first eight games he played in and have lost the last six.

“We’re going to take this one, it’s just time – the law of averages,” he said before the game. “We’ve gotta win one at some point.”

But Democrats got off to a fast start, scoring twice in the bottom of first inning. They scored again in the fifth and added two more runs in the sixth inning.

Republicans, meanwhile, were only able to manage six hits off Rep. Cedric Richmond, D-Louisiana. One of those was Flake’s second-inning single, putting him on base to score the GOP’s first run of the game.

Republicans added one more in the seventh. They committed four errors to the Democrats’ one.

Not all the games were being played on the field, though.

President Barack Obama made a surprise appearance at the game, visiting both dugouts and getting cheers from fans on both sides. Democrats cheered their president while Republicans were chanting “TPP” for Trans Pacific Partnership – a trade pact the president and many Republican lawmakers support. It is expected to come up for a vote in the House Friday.

Sen. Rand Paul, R-Kentucky, a presidential candidate, was surrounded by reporters before the game, and he was cheered loudly by fans whenever he came to the plate – where he struck out twice.

Baseball was the main topic of the evening but not the only one, said Rep. Joe Barton, R-Texas, and the manager of the Republicans.

“We don’t do a lot of talking about politics and legislation, but it does come up from time to time,” Barton said. “Of course we have two senators, Jeff Flake from Arizona and Rand Paul from Kentucky, and we will talk with them about strategy about how to move bills.”

But ultimately, he said, it was less about politics and more about building rapport.

“It gives us a chance to just focus on what brings us together, and baseball is … historically an all-American game,” Barton said. “It’s one of the things that binds us together as a nation.”

Despite Flake’s prediction of victory Thursday, Democrats ended up winning their seventh straight game and taking a one game lead in the series, with 39 wins to the GOP’s 38. The final score was 5-2.

But Flake said hard feelings are not in the nature of this particular game.

“It’s competitive, but after the game, shoot, some of these guys are my best friends,” he said.