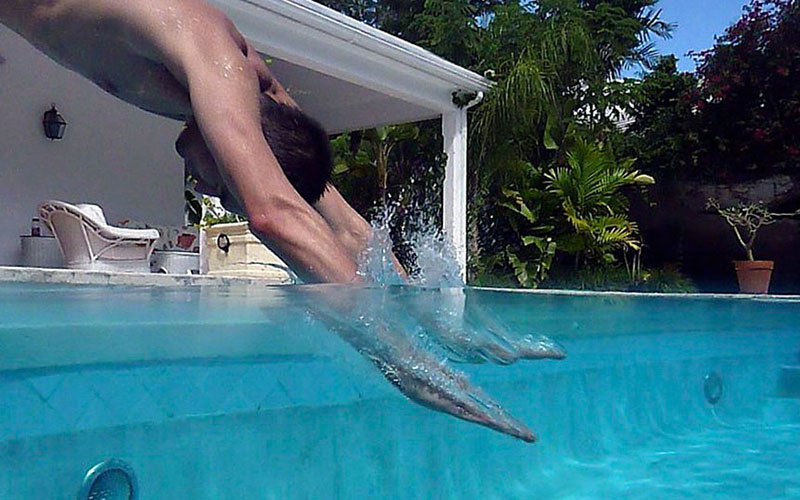 Drowning deaths are down in Arizona so far this year, but as pool season heats up along with the weather experts expect the pace of accidents to pick up. (Photo by SuperFantastic via flickr/Creative Commons)

WASHINGTON – A cool, wet spring in Arizona and an ongoing emphasis on pool safety have combined to produce statewide drowning numbers that officials say are far below those at the same time last year.

Fourteen deaths had been reported as of this week, 10 of those in the Valley, according to data compiled by the Children’s Safety Zone. A statewide drowning average was not immediately available, but the 14 deaths so far this year are well below the pace required to hit the 15-year average of just under 54 deaths a year in the Valley alone. Drowning deaths in Maricopa and Pinal counties make up the bulk of such deaths in the state, according to data compiled by the Children’s Safety Zone. Click on the graphic for an interactive look at drownings over the past five years. (Cronkite News graphic by Aubrey Rumore)

That pace could pick up, however, with festivities on Memorial Day weekend marking the unofficial start of the summer season. Despite the state’s year-round warm weather, the majority of drownings in Arizona still take place in summer.

“We aren’t resistant to summer out here,” said Aaron Ernsberger, a spokesman for the Phoenix Fire Department. “We see a spike in drowning in summer because of the sheer frequency of people in water.”

Tiffaney Isaacson, coordinator for Phoenix Children’s Hospital’s Water Watchers program, called Arizona “the perfect storm” for drowning dangers, with its warm weather, relatively new houses that are likely to have pools and lots of young children.

“It’s a combination of various factors that have made Arizona high risk for drowning,” she said.

She and others welcomed the low number of deaths so far this year, but Isaacson said those numbers are still high relative to most other states.

“It’s important to note that low means different things in different places,” said Isaacson, who is also on the advisory council for the National Drowning Prevention Alliance.

Numbers of drowning deaths reported by the Children’s Safety Zone so far in 2015:

Arizona has long had one of the highest child drowning rates in the country, she said, noting that it peaked at 15 drowning deaths per 100,000 children from 1980-1990.

But the state has made considerable improvement since then, she said. By 2000, the drowning rate for children had been cut to six per 100,000.

Part of the reason for that decline is a coordinated effort over the last 30 years by private and public agencies to get the word out about swimming pool safety, advocates said.

One of those organizations is the Drowning Prevention Coalition of Arizona, founded 26 years ago by Lori Schmidt, its current president. It brought together fire departments, hospitals, families who lost loved ones to drowning and others interested in pool safety.

She said years of efforts to enforce pool safety and promote awareness have helped lower drowning across the board in Arizona – but that the weather also played a role in the drop in deaths so far this year.

“I think you have to factor in that it’s been cooler this May than past years,” Schmidt said.

Water Watchers at Phoenix Children’s Hospital is another of those groups. Isaacson said it is a constant effort to get the word out on safety. She noted that Children’s Hospital has already seen 20 children after water-related incidents so far this year, two of whom died.

“There are two parts of raising awareness,” Isaacson said. “The first part is creating conversation about the issue and the second is making that conversation productive.”

The reduction in the drowning rate in Arizona has “plateaued over the last 10 years,” Isaacson said. While the state, the media and organizations like hers all have a role, she said individuals also have to be involved.

“It begins in your own backyard,” she said.