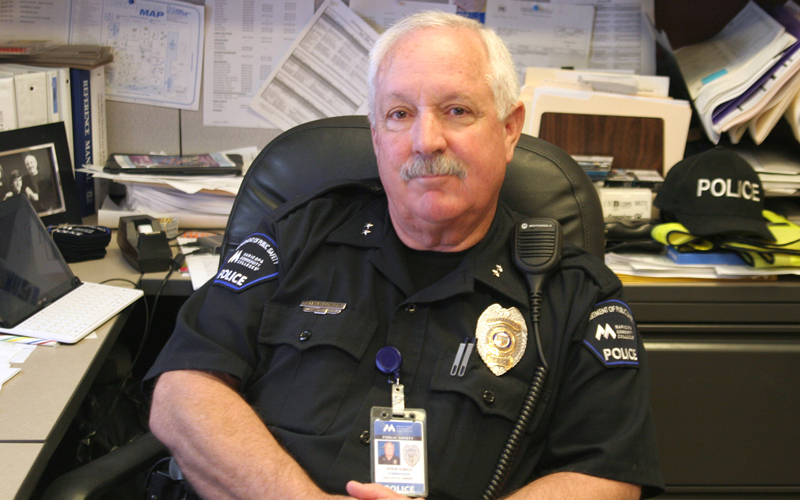 Steve Corich, police commander at Mesa Community College, said libraries and other places where students gather can attract thieves, as can parking lots and bike racks. (Photo by Julian Lopez)

Tyler Puglisi leaves her Marc Jacobs watch at home when she leaves for classes at Glendale Community College. A freshman, Puglisi said friends have had their cellphones and watches stolen, and she doesn’t want to lose something that cost her more than $150.

“I leave valuable items at home and keep my other items close to me at all times or in my bag in enclosed pockets,” Puglisi said.

Larceny and theft was the No. 1 category of crime reported at Maricopa Community Colleges in 2013, according to the latest Clery Act reports institutions of higher education are required to file each year.

Police commanders at two community colleges said that given the large number of students coming and going throughout the day, the number of incidents makes the problem look bigger than it really is. But both said that students trust those around them too much.

“We have a small number of people who come on campus fairly regularly and steal from us who are not affiliated with us,” said Steve Corich, police commander at Mesa Community College. “They come in and try to blend in with our population. These people routinely go into large public areas such as libraries or student centers and look for opportunity to pick up something that is left unattended.”

Mesa Community College has close to 100 video cameras around campus, with most of them directed at the bike racks and parking lots, where most theft happens, Corich said.

Corich has also recently started assigning a full-time security officer to the library, and he hopes that the cameras and the advertisements around campus that say there are video cameras in the area will serve as a deterrent.

“We are always looking to up the ability to control crime especially theft since it is our biggest problem on campus,” he said.

Mesa Community College has certified police officers on duty from 6 a.m. to 11 p.m. Monday through Friday and one officer from 10 a.m. to 8 p.m. on Saturday. The rest of the time, Corich has non-sworn security personnel patrolling campus.

Les Strickland, commander of the Department of Public Safety at Scottsdale Community College, said that the challenge with these crimes is they are easy to commit. Students leave their belongings in an open area and when they come back from the bathroom or someplace else, they’re gone.

“Students need to be aware of their surroundings,” he said.

Scottsdale Community College has officers or security patrolling the campus 24 hours a day, seven days a week, Strickland said. He also said that he put pamphlets around campus that he hopes bring awareness to the larceny and theft problem.

“I speak to students at orientation at the beginning of the semester and tell them to take their belongings with them at all time,” he said. “I also tell them to be cautious of where they are.”

Samuel Dedoba, a freshman at Phoenix College, which had 64 incidents of theft and larceny in 2013, said that although he has yet to have something stolen from him, he remains cautious of his surroundings and keeps his backpack, cellphone and iPod nearby.

“When I walk around campus, I basically hug my belongings,” he said. “I haven’t had anything stolen from me or have friends that have had something stolen but I still keep my belongings close to myself.”