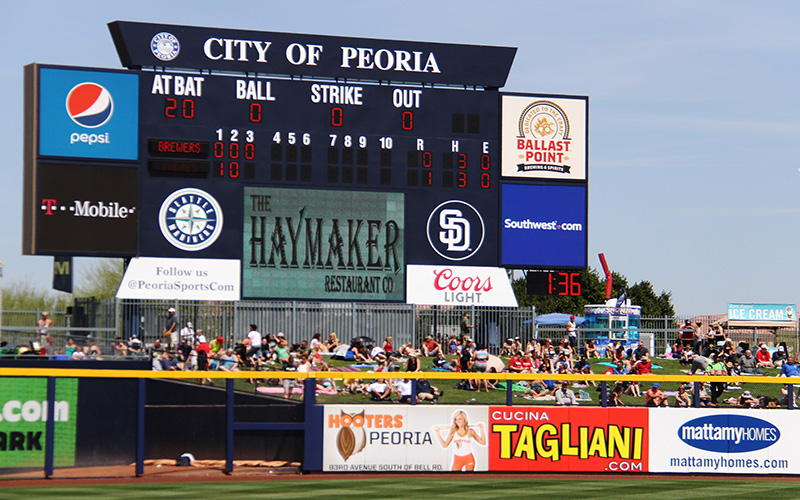 At Peoria Sports Complex the pace of play clock is hung off the scoreboard, blending in with the other numbers of baseball. (Photo by Meghan Kuebler)

Although many still debate the benefits of implementing pace of play rules in Major League Baseball, early season results show baseball has broken the three-hour barrier for average game time.

With the new innings-break clock and the mandate that hitters keep one foot in the box, 2015 regular season games through April 20 averaged 2:59, a marked decrease over the 3:08 average game time of last season, according to Baseball Prospectus.

The decrease in average game time is a victory for champions of the new rules, including new MLB Commissioner Rob Manfred.

“I’m really intent that we’re going to have an average game time that’s going to start with a two as opposed to a three,” Manfred said during spring training.

Manfred said fans are the real benefactors of the shorter games.

“The initiatives will be a success regardless of the outcome because I think they show the game is trying to be responsive to what we’re hearing from our fans,” Manfred said.

Nine-inning spring training games averaged 2:56 in 2015, a six-minute improvement from 2014, according to MLB.

Although most Major League players experienced their first taste of baseball with a clock during spring training, the Arizona Fall League was the real testing ground for many of the new rules.

The innings-break clock and batter’s box rule were implemented at all Fall League games, while a 20-second pitching clock was tested at Salt River Fields. The clocks were placed behind home plate and in the outfield for all players to see.

Chris Jones, an MLB umpire supervisor for the last 10 years, said a couple of managers pointed out a problem with the pitching clock rule during the Fall League. They complained the clock did not reset if their pitcher stepped off the pitching slab with runners on base.

“We were able to iron that out, so now the rule is amended,” he said during the Arizona Fall League. “That’s why we’ve had different experiments over the years (in the Fall League). Everything from changing the foul pole color to the pace of the game.”

Although the pitching clock was not transferred to the majors for 2015, it is used in Triple-A and Double-A.

“We were pleased with the experiment in the pitch clock in the Arizona Fall League,” Manfred said. “The reason we are doing additional experimentation is to make sure we understand it really well before we made a decision. Obviously that’s a bargaining topic (with the Major League Baseball Players Association) as well.”

Along with the pitching clock, other rules tested at Salt River Fields included a no-pitch intentional walk and a maximum of three conferences at the mound per game.

The combination of these rules shortened Fall League games at Salt River Fields by an average of 10 minutes.

To oversee the effectiveness of the new pace of play rules, MLB officials will monitor average game times throughout 2015.

“I’m really encouraged by the early results,” said Joe Garagiola Jr., MLB senior vice president of on-field operations. “I think the players have tried hard and are trying hard to get with this program.”