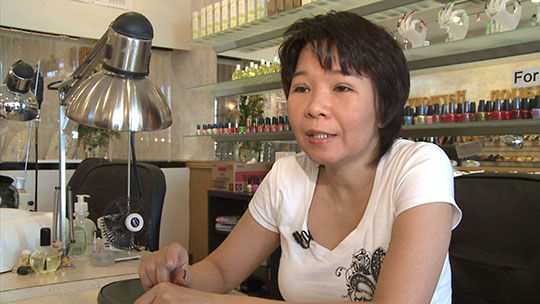 Cindy Vong challenged the Arizona State Board of Cosmetology’s decision to prohibit “fish pedicures” in her Gilbert salon. (Photo by: Cronkite News)

Cindy Vong argued that the board’s 2009 order violated her constitutional rights to due process and equal protection. But lower courts disagreed and the Supreme Court’s decision not to take up the case lets those rulings stand.

“It’s certainly disappointing, but not unexpected,” said Clint Bolick, litigation director for the Goldwater Institute, which had taken Vong’s case. “We knew that the odds were low, but we wanted to try a Hail Mary pass for Cindy Vong.”

Donna Aune, the executive director of the state cosmetology board, welcomed the end of the case, which has been working through the courts for the last six years.

“The Arizona Board of Cosmetology always felt it was a consumer protection issue,” Aune said. “That’s what we’re here for, and that’s what’s important.”

Vong first offered fish pedicures in 2008 at her spa, La Vie Nails and Spa, according to court documents. “Fish spa” treatments have people put their feet in a tank filled with small fish, which then nibble dead skin from the customer’s feet.

Almost immediately, state regulators told Vong that a fish spa would likely violate board health rules. After months of back and forth between the state and Vong, the board declared that the fish could not be allowed because they cannot be sanitized between uses.

“We believe that they use a tool,” Aune said in 2009, when the Goldwater Institute first filed suit against the board. “It’s a fish, and it can’t be disinfected.”

A Maricopa County Superior Court ruled in favor of the board in 2010, and again when an appeals court ordered the lower court to consider Vong’s constitutional claims. The Arizona Court of Appeals upheld that decision in May 2014 and the Arizona Supreme Court refused in November to consider the case.

It was then that the Goldwater Institute petitioned the U.S. Supreme Court, arguing that fish spas have “never once been shown to cause harm anywhere in the world.” It said the board went too far when it banned a practice that it could just as easily have regulated.

Goldwater spokeswoman Starlee Coleman said last month that the institute wanted to “make sure that the government can protect public health and safety, but also the right of entrepreneurs to engage in legal businesses.”

But one expert has said that just because there are no known reports of harm from fish spas, “that doesn’t mean nobody has been injured.”

“This is not like a drug company where they have to report it to the FDA (Food and Drug Administration),” said Dr. Ella Toombs, a dermatologist familiar with the industry. “Nobody has to report this.”

The Supreme Court only accepts about 1 percent of requests for review it receives every year, or about 80 cases from more than 8,000.

Bolick said the Goldwater Institute will now refocus its efforts on a legislative route, noting that Gov. Doug Ducey is an advocate of eliminating excessive regulation of small businesses.

“We never take a defeat as anything other than a momentary loss,” Bolick said. “I think that Cindy Vong’s case will be a poster child for re-examining those rules.”