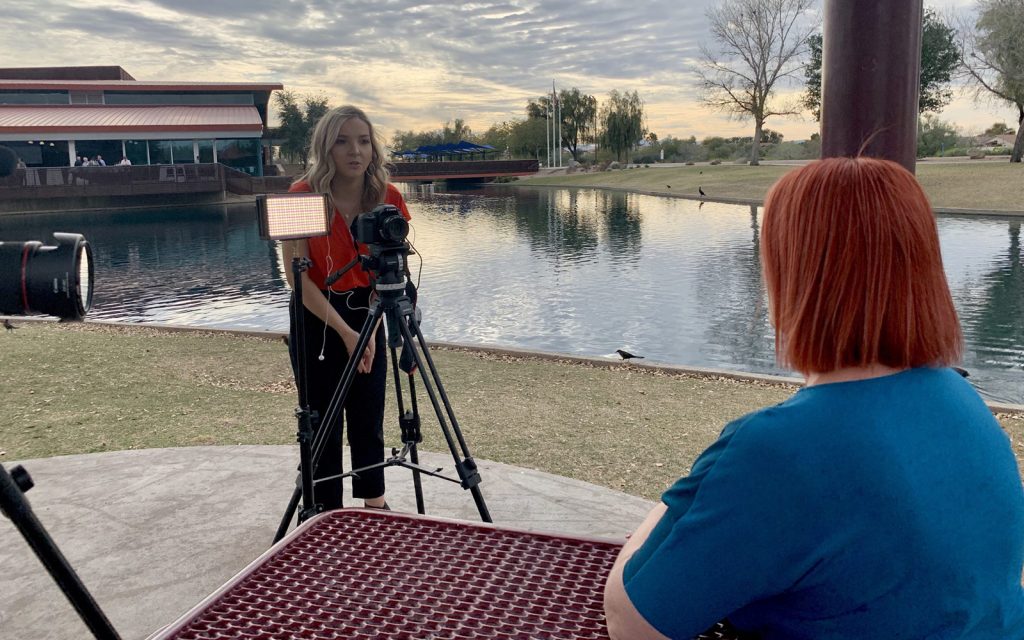 Cronkite student Faith Abercrombie interviews a source as part of a project to combat the growing epidemic of youth suicide. Dozens of students spent the past year reporting and producing a documentary and digital content on mental health, isolation and loneliness, at-risk gene variants, the LGBTQ+ community and more. (Photo courtesy of Cronkite School)

What can be done about youth suicide? Student journalists at Arizona State University’s Walter Cronkite School of Journalism and Mass Communication have set about answering that question, seeking to uncover workable solutions to what’s become an alarming public health crisis. Drawing on field work and interviews with scores of their peers, parents, teachers, lawmakers, clinicians, and counselors from across the state and around the country, students have identified a multiplicity of factors linked to youth suicide, rooting out insights into which prevention efforts have worked and which haven’t. It is an attempt to go beyond the simple answers, and provide a more complete account of a phenomenon that health experts say is expected to worsen amid the current COVID-19 crisis. For instance, a recent Centers for Disease Control and Prevention survey found that, shortly after the pandemic swept the country, approximately one in four young adults, ages 18 – 24, had “seriously considered suicide.” This is an attempt to find out what can be done about that threat, culminating in a 26-minute documentary set to air at 5 p.m. on Jan. 12 on Spanish-language TV stations and at 6:30 p.m. on English-language TV stations. All major network-affiliated stations in Phoenix, Tucson and Yuma are expected to air the documentary. Find more information here.

Despite sharp national increases in the numbers of youths dying by suicide, newsrooms have often been reluctant to pursue in-depth coverage due to concerns of contagion, a phenomenon in which media reporting can exacerbate existing trends. Left unexamined, however, the crisis can also fester and grow. And over the years, it has. In 2019, the Centers for Disease Control and Prevention reported that youth suicide rates had swelled by 56% between 2007 and 2017, making it the second leading cause of death for those aged 10 to 24, just behind accidents such as car crashes. In Arizona, the situation is considerably worse; the rate of suicide among adolescents consistently and significantly higher than the national average. In 2019, for instance, Arizonans aged 15-19 were more than 21% more likely to die by suicide than the average American within the same age group. To matters worse, long-term isolation and financial insecurity associated with the COVID-19 pandemic may contribute to even greater suicide risk, adding to what prevention experts fear could be a perfect storm.

But there are solutions and resources offering hope.

If you need help

If you or someone you know is experiencing suicidal thoughts, help is available. In Arizona, call or text 602-248-8336 (TEEN).