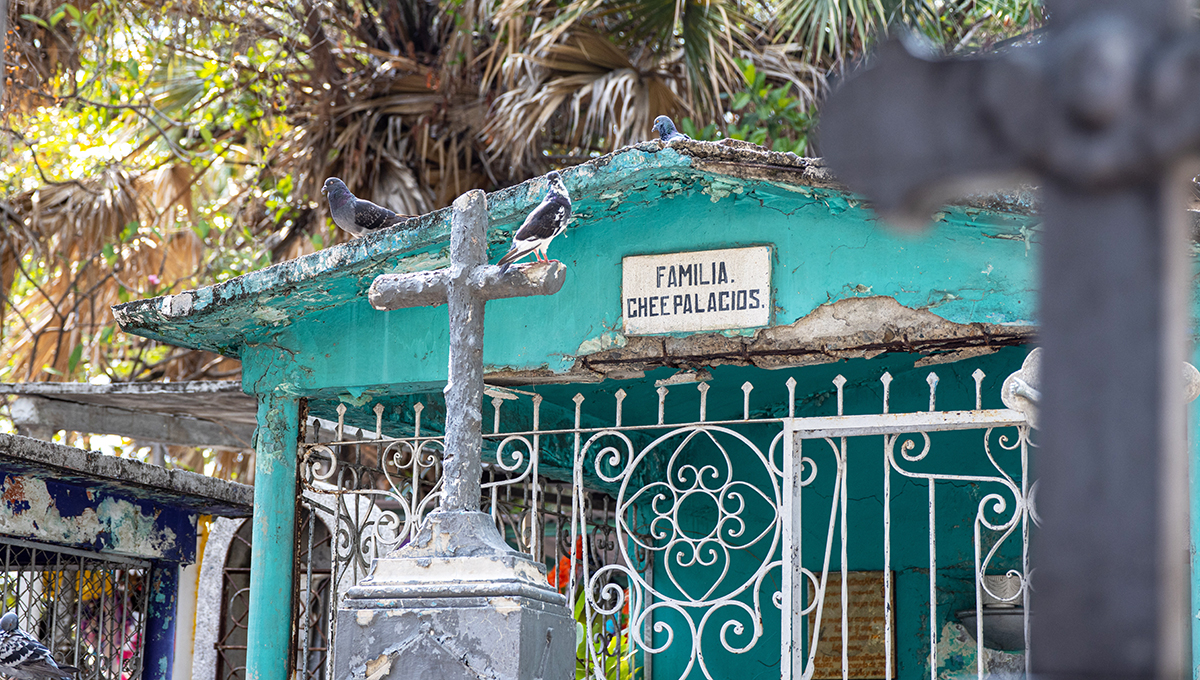 A mausoleum in the Panteón Municipal in Tapachula, Mexico, is festooned with decorations from loved ones celebrating their ancestors. It’s one of many colorfully painted tombs in the city cemetery. Photo taken May 7, 2022. (Photo by Tirzah Christopher/Cronkite Borderlands Project)

TAPACHULA, Mexico – Juan Carlos, a gravedigger at Panteón Municipal, the City Cemetery, pointed to the barren plot of dirt beneath his feet.

“I buried 17 people here,” he said, referring to the unclaimed and often unidentified bodies of migrants who died in this city of 350,000, which is a conduit and holding center for migrants heading north from Central America.

The plot was strewn with used menstrual pads and empty chip bags. Unlike the rest of the cemetery, where bright pink and blue mausoleums are adorned with paper flowers and proclamations of devotion from loved ones, there are no remembrances, no tributes, no grave markers for those buried here. 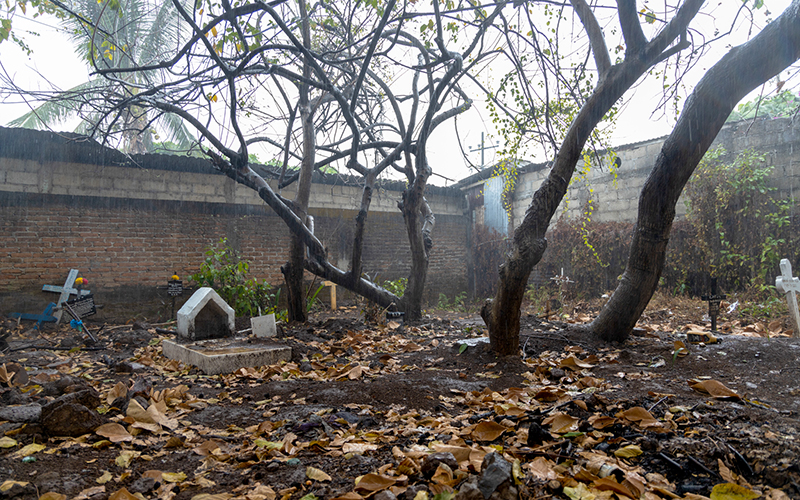 The “migrant cemetery” is an overgrown plot in the southeastern corner of Panteón Municipal in Tapachula, Mexico. (Photo by Katie Donnelly/Cronkite Borderlands Project)

“We don’t get paid for the bodies we bury down here,” said Carlos, raising his voice to be heard over the squealing of pigs at a makeshift butcher shop on the other side of the cemetery wall.

Because of its location less than 20 miles from Mexico’s border with Guatemala, Tapachula long has been an entry point for migrants passing through Central America, most of them headed for the United States to claim asylum or risk entering illegally. But in recent years, migrants from across the globe have been delayed and blocked from continuing their journeys north by Mexico’s immigration authorities and the National Guard, partly at the urging of the United States.

And like the migrants who die unidentified and unclaimed in the deserts of Arizona, people are dying in Mexico’s southernmost state of Chiapas – as well as in the streets of Tapachula – adding to an already untenable nationwide problem of identifying murder victims found in mass graves or the remains of other migrants found throughout the country.

In April, the U.N. Human Rights Office reported that unidentified remains of more than 52,000 people – many of them murdered by crime cartels – are lying in mass graves, forensic service facilities, universities, forensic storage and safeguard centers across the country. This “forensic crisis” is playing out in a smaller but no less tragic way in Tapachula.

“We know the process that an unidentified body undergoes; unfortunately, it is very undignified in handling the bodies when they are buried in those (mass) graves,” said Francisco Reyes, manager of the Casa del Angel Funeral Home. “The entire process of identifying bodies is very scarce, since it (the government) does not have all the personnel or equipment necessary.”

There is an apparent lack of protocol for the treatment of bodies after they leave the medical examiner. The local government contracts funeral homes for burials but there is little regulation. If the person is unidentified or unclaimed by family the body can end up in a mass grave, which is said to be common practice at local cemeteries. Gravediggers said some of those burial plots were reopened at the height of the COVID-19 pandemic and the victims of the disease were piled on top of the remains of earlier migrants.

“Each mass grave can hold up to 10 bodies,” Reyes said, “they are … dragged depending on the state they are in, and they are thrown into the grave without sensitivity, as if they were garbage bags.”

Across the city, at Panteón Jardin – Garden Cemetery – gravedigger Cristan Cruz Medina, a migrant himself, said migrants deserve to be treated with at least a bit of dignity when they reach their final resting places. 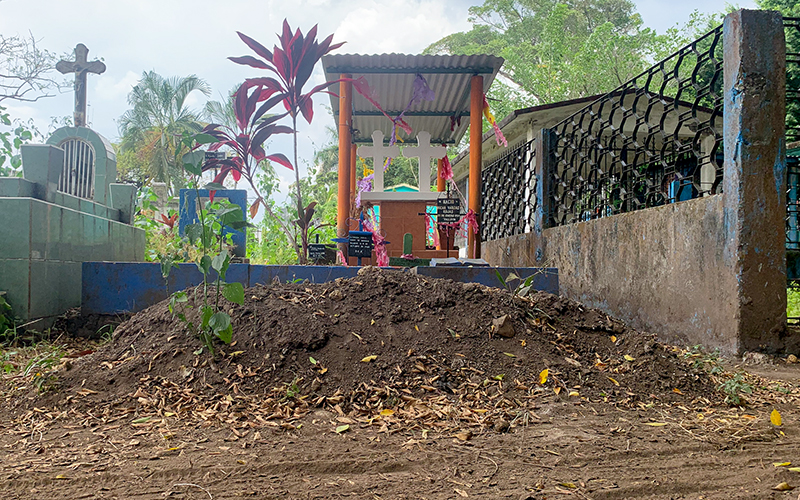 Mass graves at the Panteón Jardin in Tapachula, Mexico, were reopened to bury COVID-19 victims. “The first migrants got buried low and then the ones that are put on top are the ones who died of COVID,” gravedigger Cristan Cruz Medina says. (Photo by Katie Donnelly/Cronkite Borderlands Project)

Medina, 24, fled El Salvador when he was 16, made it as far as Oaxaca state and returned home. But tending livestock didn’t pay enough, and at 18 he left again to try and make it to the U.S. in hope of finding steady work. Traveling mostly by foot, he made it as far as Tapachula, where he has lived for six years, settling down with a girlfriend and digging graves for the past two years. He considers himself fortunate to have completed his journey by choice rather than by death.

“That could be me,” he said, pointing with a rusty machete to a dirt pile along a cemetery road, yards from the regular cemetery plots. 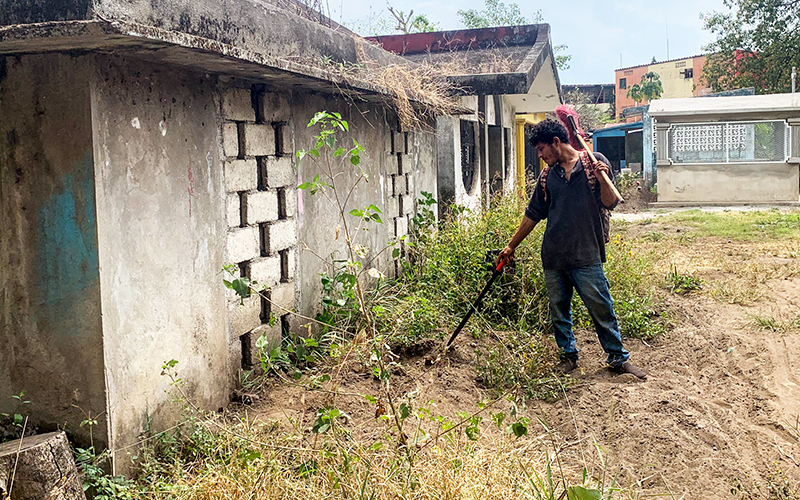 Gravedigger Cristan Cruz Medina points to a migrant grave, covered by brush and garbage. “There are 10 in this corner,” he says. “Over there, another 10.” A migrant himself, Medina reflected on a Salvadoran man whose body sat unclaimed for days before it was added to the mass grave in Panteón Jardin in Tapachula, Mexico. (Photo by Katie Donnelly/Cronkite Borderlands Project)

Even those migrants whose names are known to authorities and whose families were able to say their goodbyes often don’t receive dignified burials.

Samson Saint Rosier is buried in Panteón Jardin. He and his wife, Juverson, two sons and his sister-in-law, traveled from Haiti through eight countries, with the U.S. as their ultimate destination, before he died in Tapachula in November 2021. The family now is in Coahila state, still hoping to continue north.

In late March, Juverson Saint Rosier told her story via text transcribed by her sister-in-law. She said Samson used to tell her “if God allowed him into the U.S., he would trust him to make our boys successful.”

Falling in and out of poverty, the Saint Rosiers were driven by hopes for their childrens’ futures and the fear of being returned to Haiti, the most impoverished country in the Western Hemisphere, which has been plagued by natural disasters, government corruption, gang violence and political assassinations.

“I suffered a lot when I was a child, I will never want my child to suffer, too, that’s why it’s the first thing that pushes me to leave Haiti,” Saint Rosier said.

Of the two years they traveled, she said, the dark week spent in the treacherous Darién Gap will never leave her mind.

A 60-mile-wide no man’s land between Colombia and Panama, the Darién Gap has become a common route for migrants traveling from South America to the U.S., despite the forbidding terrain, wildlife and merciless bandits. During that week, Saint Rosier said, she felt like a character in a movie. She helplessly witnessed the sexual assault of other migrants, and the near-drowning of her sister. She watched robbers empty the pockets of her husband, after striking him over the head with a revolver.

He traveled for weeks with increasing swelling and pain in his head and stomach before he died in a Tapachula hospital. 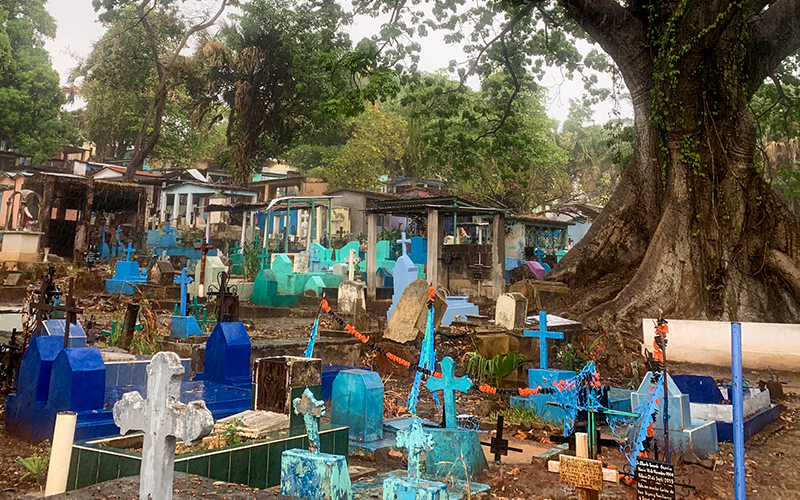 Reflecting on her husband’s death, Saint Rosier cited the Bible verse Hebrews 9:27: “Just as people are destined to die once, and after that to face judgment.” She said she is comforted knowing Samson was so caring he will go to heaven and she will see him again.

Unable to stay in Tapachula with Samson’s body, the family had to mourn on the move. Navigating travel with no money and a devastating loss, Saint Rosier said, they trust God will help them cross the U.S. border, and that Samson will continue to guide them.

“It was hard to leave but we couldn’t just stay behind,” said Juverson, in a separate phone interview, with her son translating. “There’s no work in Tapachula, so we just said our goodbyes and left it with God.”

They reached Juarez, a city categorized as one of the most dangerous for migrants, across the Rio Grande from El Paso,Texas. The family’s dream persists. After losing her husband, Saint Rosier worries about being deported back to Haiti and having to start over again.

Others who’ve lost loved ones along the migrant trail have been able to bury them in the places they grew up. But the pain is no less.

In El Salvador, Lilian Alvaregaz visits the graves of her daughter and granddaughter in a local cemetery – Leydi Alvaregaz and her daughter, Fatina, died in an accident while traveling north in a migrant caravan in December 2021. Their bodies were shipped home with the help of the Salvadoran embassy.

When her daughter and granddaughter left the home she shared with them to migrate to the U.S., Lilian Alvaregaz was convinced she would never feel greater pain.

“The last time I saw them was the day they left, leaving a great void in my heart and soul,” she said, holding back tears as she typed Leydi and Fatina’s stories on Whatsapp, in hopes their stories will not be forgotten.