ANAHEIM – Much of the news surrounding the Los Angeles Angels of Anaheim still revolves around their brawl with the Seattle Mariners more than a week ago. After losing that series, they have gone 2-4 and given up an average of eight runs in the losses.

Sitting 37-44 and 15 1/2 games behind the division-leading Houston Astros is a tough pill to swallow for a team with two of baseball’s best in the lineup. The club’s pitching struggles were only exacerbated by suspensions handed down to three pitchers.

And the struggles overshadowed e​​fforts by its elite players. In the Angels’ second game against the White Sox during their recent three-game series, center fielder Mike Trout and designated hitter Shohei Ohtani continued showing why they are considered two of the very best in baseball. Trout hit a home run in the third inning, followed immediately by a home run by Ohtani.

It was the second time the duo has gone back-to-back this season.

Ohtani finished the night 3 for 3, with two doubles and a walk accompanying his home run.

That’s where the positives from that game end for the Angels. Despite baseball’s best 1-2 punch performing as one would hope, they lost to the White Sox 11-4.

They took two of three games from the White Sox but lost any momentum after a swept by the Astros in a series that concluded Sunday. Ohtani and Trout were a combined 2 for 22. Not having a pitching staff to cover off nights by two superstars can sting.

The staff’s struggles were exemplified in that second game against the White Sox as pitching had the biggest impact on the game. Rookie and University of Arizona product Chase Silseth made only his fifth career start, and was solid through four innings before faltering in the fifth. From there, the bullpen couldn’t stop the damage. 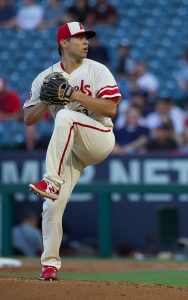 Angels rookie pitcher and University of Arizona alumnus Chase Silseth made his fifth career start against the Chicago White Sox in the Angels’ loss. (Photo by Matthew Legere/Cronkite News)

“We got off to a good start,” said Ray Montgomery, who was acting as manager due to interim manager Phil Nevin’s suspension following the team’s altercation with the Mariners.

“Chase was moving along pretty good … he left a pitch up there. It’s something I’m sure he’d want to take back, but until that point, (we’re) really happy with what we saw.”

Pitching can be an issue for teams in positions like the Angels, teams under .500, but not not so under .500 that the hope of a winning season is completely dashed. Around baseball, the Angels’ statistical contemporaries played games and won. Sometimes despite poor pitching.

With the Angels sitting at fourth in the American League West with a 37-44 record, the best comparison is their recent melee opponents, the Mariners. Seattle is tied for second at 39-42, good for a .481 winning percentage.

For the Mariners, newly acquired starter Robbie Ray pitched seven innings, giving up only one hit and striking out eight. From there, the bullpen did its job and the offense mustered enough to squeak out the win, as outfielder Jesse Winker collected two RBIs in the eigth inning.
The win gave momentum to the Mariners, who have won five of their last six.

Now look at the Angels in that series against Chicago. Noah Syndergaard, a newly acquired starting pitcher, went seven innings and struck out seven. Despite giving up three earned runs, it was still the type of outing the Angels desperately need.

The Angels got big offensive contributions from players like Brandon Marsh and Taylor Ward, and held on to win. The two bullpen pitchers used, Ryan Tapera and Raisel Iglesias, didn’t concede a single run.

Obviously, the same wasn’t true against the White Sox the next night. Ray Montgomery went to the bullpen early in the fifth inning. Every pitcher used gave up at least two runs, with the exception of Aaron Loup, who didn’t give up any runs but only pitched a third of an inning.

There was concern that Angels reliever Elvis Peguero could have been tipping his pitches to the White Sox batters. A video of Mike Trout seemingly telling Peguero he was tipping went viral during the game.

guy looks so fed up pic.twitter.com/e2UPQDMW5h

“Obviously Mike sees stuff,” Montgomery said. “Players all over the field see things like that, so we’re always working on that. That one in particular, I think we were looking at after, it’s something you really have to stay diligent on.”

Bullpen depth is something the Angels have struggled with all season, but what made this particular outing worse for the Angels is that proven solid pieces Tapera and Iglesias were not available. They, too, were suspended from the brawl with the Mariners, with that discipline being handed down last Monday night.

“Certainly when you’re playing down a man at any position, it makes it a little more challenging,” Montgomery said. “I still felt really good about where we were going in different spots in the game.”

When a team’s already suspect bullpen is strained even more by suspensions, forcing the call up of an unproven rookie, the over-reliance on a shaky pitcher and the concern of overusing a proven solid reliever like, say, Aaron Loup, it can lead to losing 11-4 to the White Sox while your peers in the standings find ways to win.