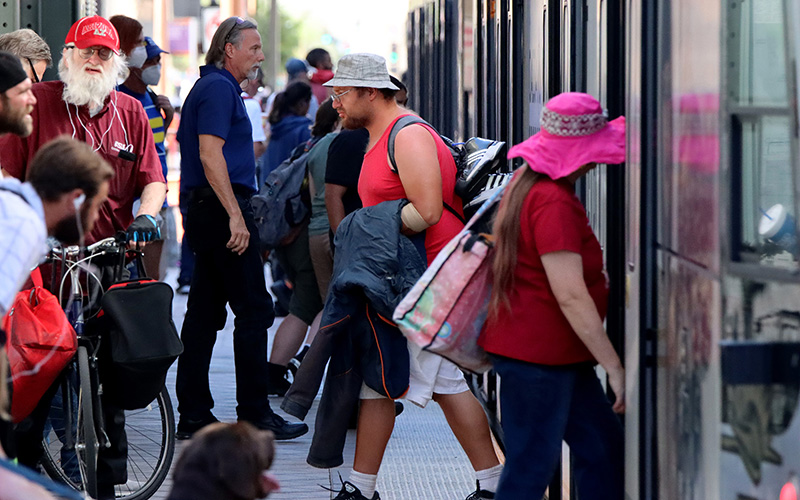 People board the light rail in Phoenix. A new Census Bureau report says that only about 60% of Americans are actually going to work when they go to work, with the rest working virtually. In Arizona, just 58.1% worked on-site as of May. (Photo by Chris Nano/Cronkite News)

WASHINGTON – A computer monitor square that lights green on the edges when he speaks has become Steven Zylstra’s de facto office.

Zylstra is one of a sizable number of Arizonans who have yet to go back to the office two years after the start of the pandemic, opting instead to meet all his clients, co-workers and other professional connections in the digital space.

The latest Census Household Pulse Survey found that slightly more than 60% of Americans were working on-site in the first week of this month, with the rest either working from home or not working at all.

In Arizona, the number was even lower, with just 58.1% of people zooming back to the office, as opposed to Zooming to the office. The rate for the Phoenix-Mesa-Chandler region was virtually the same, at 58.2%.

“Some CEOs want their people back right in the office,” said Zylstra, the president and CEO of the Arizona Technology Council. “I don’t think that’s going to bode very well for those CEOs in the long run. Because there’s, you know, too many advantages for us to work from home.”

Only eight states and the District of Columbia had a lower percentage of on-site workers than Arizona. Participation rates ranged from a high of 70.7% of onsite workers in Utah to a low of 51.6% in Mississippi. 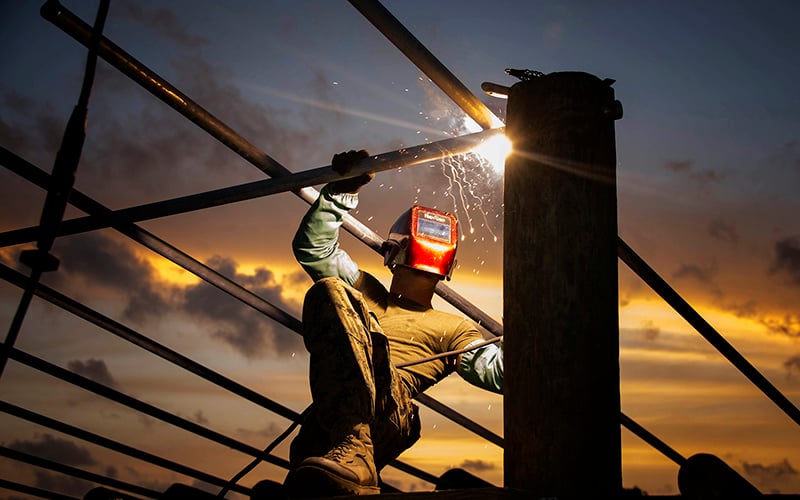 Experts attribute Arizona’s popularity among the sweatpants set to the early days of the pandemic, when relative affordability and less-competitive real estate markets attracted workers to the state.

They also say the types of jobs available in a state also affect the ability to telework for workers. And Arizona has recently experienced a steady growth in the tech industry, where remote working was ubiquitous even before the pandemic.

Last year, the number of tech jobs in Arizona increased by 3.09%, according to a Arizona Technology Council report, which said there are currently more than 207,000 tech jobs in the state. The Phoenix-area alone is home to 795 software companies and 275 new startups, according to Gregslist, a directory of tech firms and jobs.

Travis Laird, vice president for business consulting firm Robert Half, has seen the demand for remote work rise in Arizona. And in the current state of candidate-friendly job market, Laird said, companies need to offer perks, like work-from-home, for new hires or to keep the people they already have.

“We hear from candidates all the time that, ‘If my employer changes my work setup – which is fully remote – they want me to be hybrid or they want me to work back on site full time, I will immediately consider a job change,'” Laird said.

Data from Robert Half show roughly 50% of employees want to continue remote working or experiment with a hybrid work environment.

However, following 2 years of disruption to the traditional work model, managers are now craving the bygone days. According to Robert Half, 73% of employers in the Phoenix-metro area want and expect workers to return to the office shortly. That number was about 60% a year ago.

“What we went through in 2020 was one of the biggest shifts in how people work,” Laird said. “And I think those that are more successful on the other side of this will continue to embrace that mentality of factoring in that employees are now going to view how they work or where they work as a critical component.”

But Hoffman said that’s going to be a tough sell to workers who were attracted to the state by the possibility of working without going to an office.

“Remote work has resulted in an acceleration of domestic in-migration to Arizona,” Hoffman said. “People can now, in many cases, live where they want and remote work. No need to be in large cities, commuting, etc.”

Zylstra said he thinks remote work “is here to stay,” as Arizona continues to attract companies and competition for workers remains high.

“Now people can live in Prescott or Flagstaff or anywhere and live in an environment that’s conducive to their desires and work from those remote areas,” he said. “So it creates an advantage for building a workforce for Arizona.”