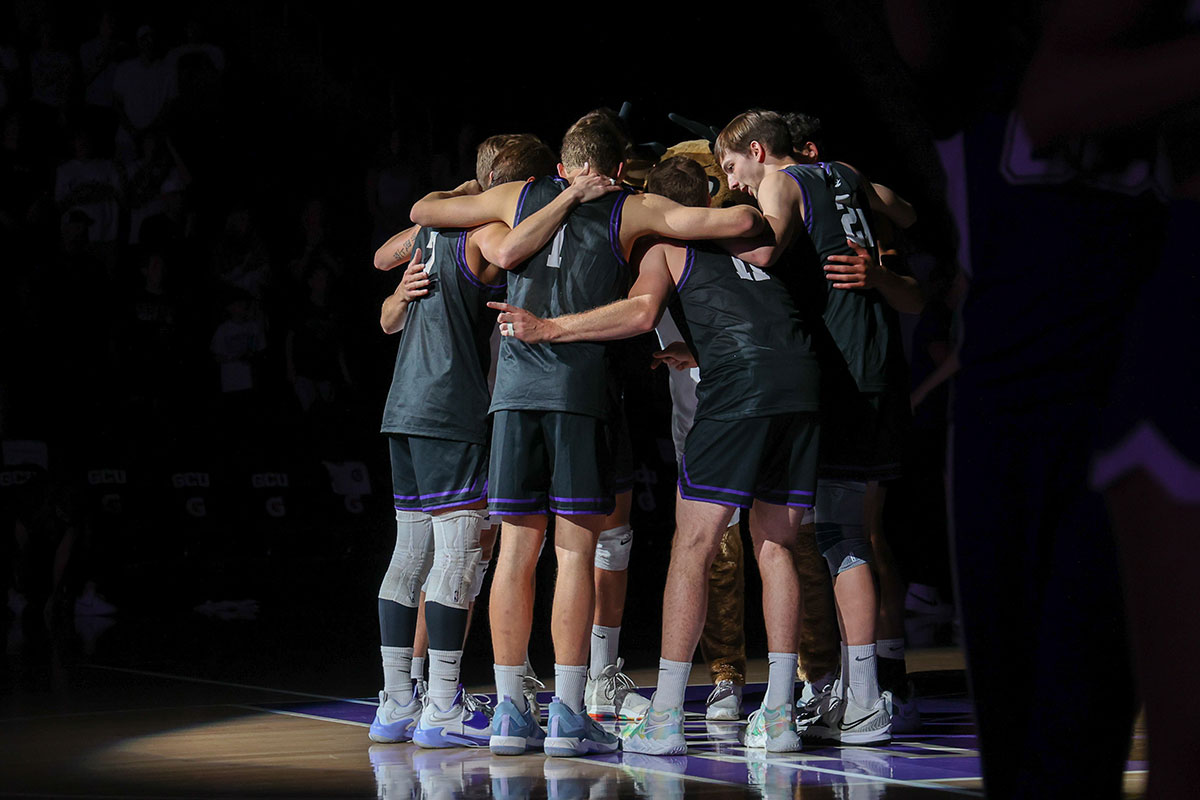 The tight-knit Grand Canyon men’s volleyball team is supportive of Camden Gianni after he underwent cardiac arrest, but also jokes with him about his “death.” (Photo by Mary Grace Grabill/Cronkite News)

PHOENIX – The first practice following Christmas break in 2018 felt like any other workout. The Grand Canyon men’s volleyball team was preparing for a new season and ramping up with two-a-days.

After morning practice, Camden Gianni felt unusually winded but chalked it up to fatigue.

“Something didn’t feel great,” he said. “But there’s just those days where you feel tired.”

Later that day, during the second practice in Antelope Gymnasium, he felt a sharp pain and pressure in his chest. It had happened before, twice in high school, but not to this extent. He assumed it was low blood sugar and dehydration.

It was far worse. It wasn’t long before his heart would stop – for three minutes – and his life took a frightening detour. To see now where his journey has taken him – he just completed a successful sophomore season – is to tell a tale of perseverance, not to mention the value of medical preparation. 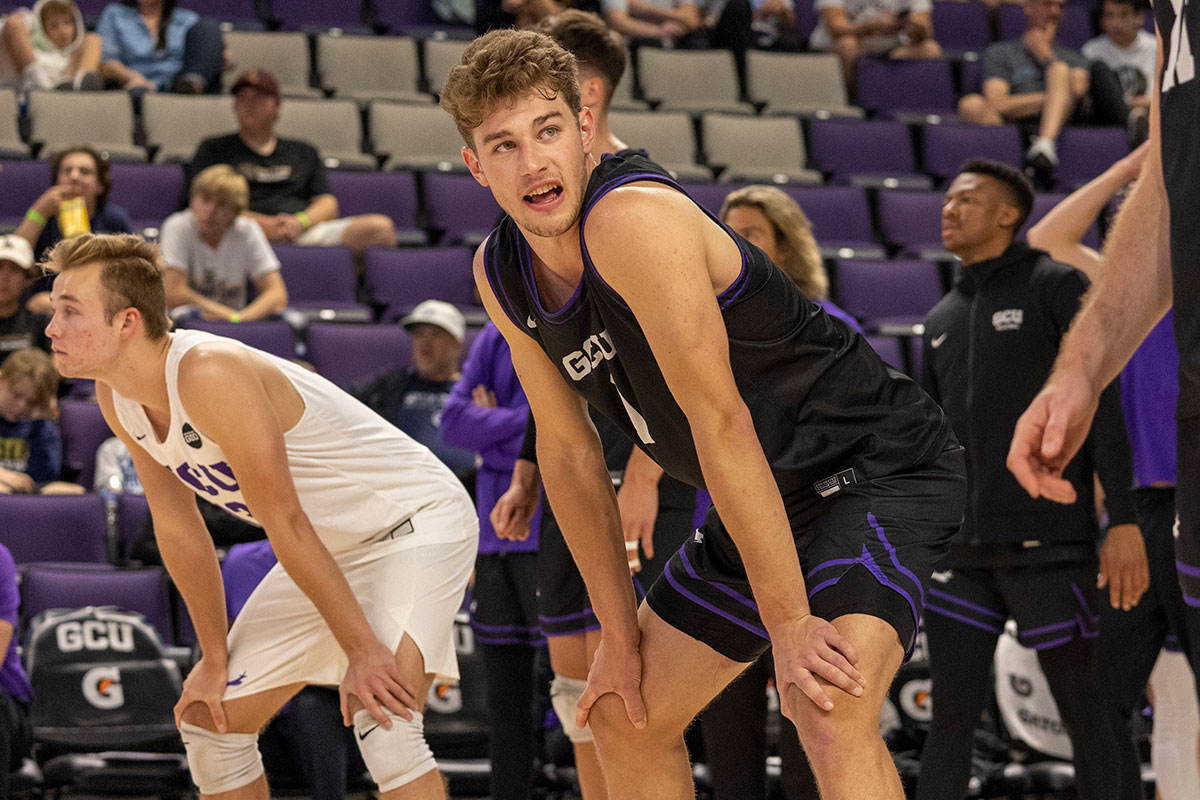 Over the course of his career at GCU, Gianni has cemented himself as a leader of the men’s volleyball program. In three seasons, he has earned two Mountain Pacific Sports Federation Freshman of the Year awards (due to an extra year of COVID-19 eligibility) and has been named to the All-MPSF First Team each of the last two seasons.

Before he was dominating on the court, however, there was the day that almost abruptly halted his career before it even began.

On that December day, after feeling off, Gianni pulled himself out of practice to drink water and catch his breath. Coach Matt Werle and former volleyball trainer Deborah Carter noticed he had stepped aside, and remembered finding it “abnormal” at the time.

As Carter was getting him water, Gianni kicked off one of his shoes after feeling claustrophobic. A seizure followed. He briefly remembers coming to, and noticed that his water was knocked over.

“I was like, that’s kind of weird,” Gianni said. “I blinked for a second … completely blacked out.”

Gianni had a second seizure, one Carter described as much worse than the first. As Werle called 911, Carter began to feel for a pulse. When she didn’t find one, the event quickly turned into a life-threatening situation.

As she was starting her fifth round, Gianni’s heart “kicked up” on her hand, Carter recalled.

“He has a pulse. His heart is beating again,” Carter said. “I was so thankful, because obviously that situation could have been so much worse.”

The following hours were filled with confusion and worry. No one quite knew the magnitude of the situation, and Gianni himself was left filling in gaps based on what others were telling medics.

The first time he learned of what happened was when Carter was explaining the sequence of events to medics. 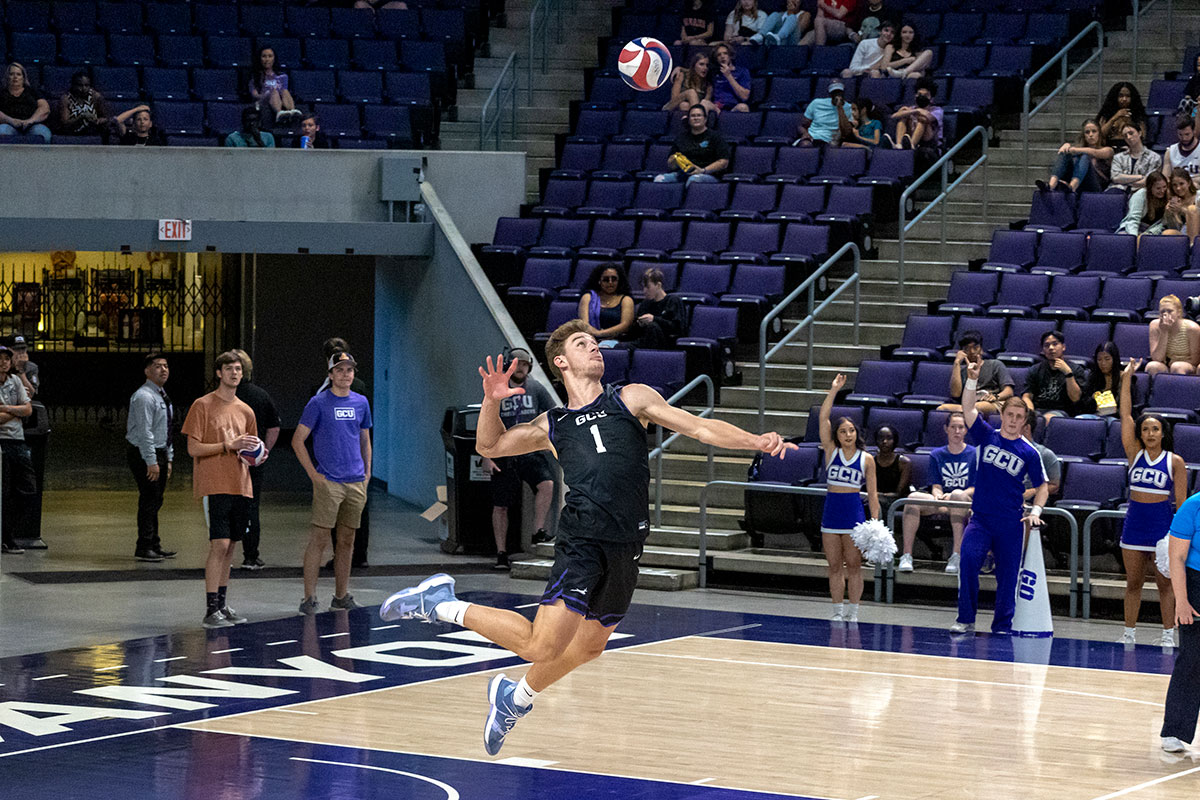 After he was named the Mountain Pacific Sports Federation’s All-First Team two years in a row, Gianni said he has goals of playing professionally overseas. (Photo by Mary Grace Grabill/Cronkite News)

Understandably, Gianni broke down hearing the news that his heart had stopped for three minutes.

“I was so caught off guard, I had no idea what was happening. I just thought that I had passed out,” Gianni said.

“I didn’t know if I was going to make it through the night.”

After a series of tests, doctors were able to identify an anomalous coronary artery in Gianni’s heart.

He was told that not only was he done playing sports, but that his everyday life was going to be put on pause.

Open-heart surgery, however, provided a path toward full recovery. Gianni was glad that he didn’t need an internal defibrillator to keep his life going.

Three months after the surgery, He did a check-in stress test to gauge where he was in his recovery. He was told to expect a stress test at the three month mark and the six month mark removed from surgery, but instead performed well enough on the first to be cleared fully.

“It was super special,” Gianni said.

In the three years since, not only has Gianni returned to the level he was at pre-surgery, but he has excelled beyond that, earning multiple conference honors and leading GCU to two winning seasons in the last three years.

“We would not be finding success without him, that’s for sure,” Werle said. “And it’s not just his talent, it’s just what he brings in terms of character.” 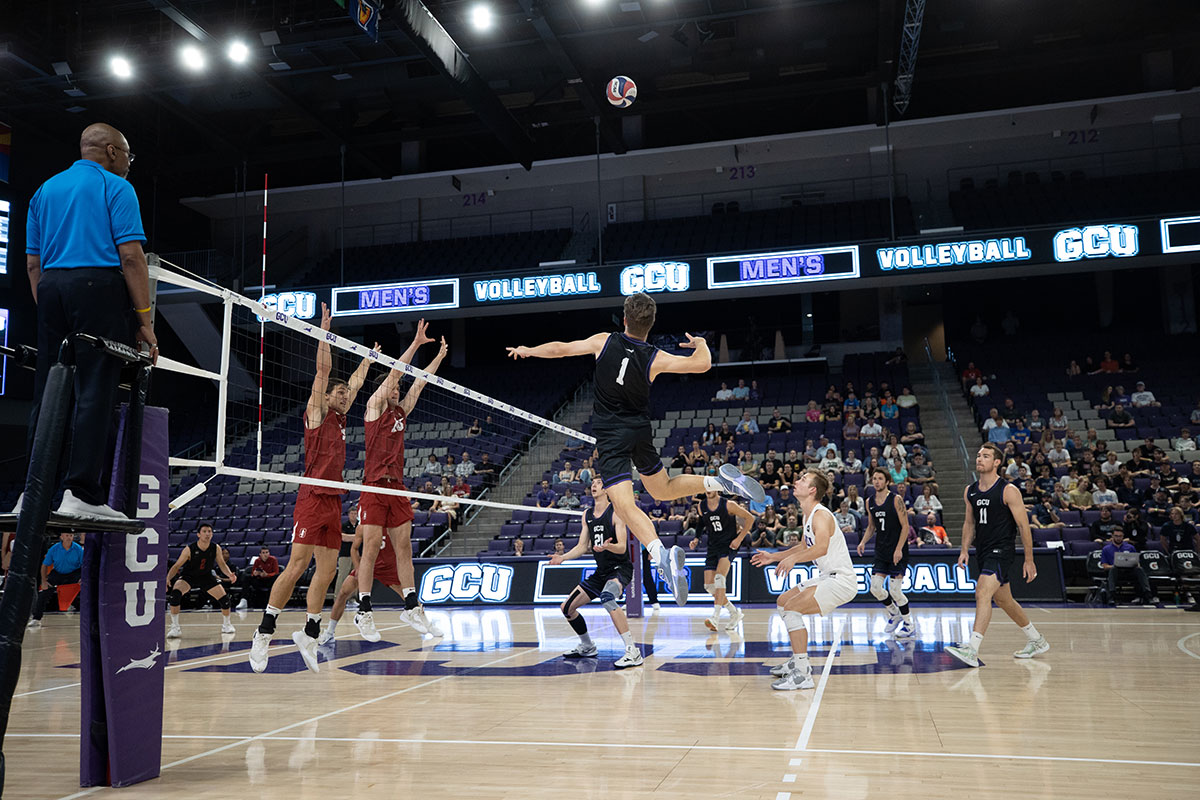 After undergoing open heart surgery, Gianni returned to the court with his teammates in 2020, quickly becoming one of GCU’s leaders.(Photo by Mary Grace Grabill/Cronkite News)

Although Gianni has not sustained a setback of that level, there are still times on the court where worry and fear of another similar experience creep into Gianni’s mind.

“It’s always in the back of your head,” he said. “But it’s awesome having a great support staff knowing the situation and just letting me feel it out.”

Werle understands when Gianni needs to step aside to regroup, citing his return to competition as an incredible accomplishment in itself.

“We can’t imagine what or even begin to think about what he’s going through as an athlete,” Werle said. “The fact that he’s back on the court and willing to, you know, put himself through those mental strains, I think is really impressive for a young man.”

“And, granted, he’s only, what, three and a half years old after his ‘death,’” Werle joked. ”If it wasn’t for someone that is as mentally tough as him, I don’t know if they’d be on the court.”

While Carter is no longer with the volleyball team, she remains at GCU as its Club Sports Head Athletic Trainer, and has kept in touch with Gianni closely throughout his recovery and since.

“Just seeing the devastation (On Camden’s face), it broke my heart for him. … For him to come back was really incredible,” Carter said.

A piece of Gianni remains with Carter every day in the form of a necklace that Gianni got for Carter after she saved his life.

One side of the silver heart has the words “With Love” engraved, and the other side has the phrase “+1 Camden.” Carter wears it every day.

Gianni hopes to bring championships to GCU, and one day he hopes to play overseas professionally. Staying home in the United States is an option too, if it is available for him.

“If the USA gym is wanting an extra outside hitter, that’s something that I’d enjoy being a part of,” Gianni said.

No matter where Gianni ends up or what path he goes down, he relies on his faith that he will end up where he is supposed to be.

Right now, that place is on the court.