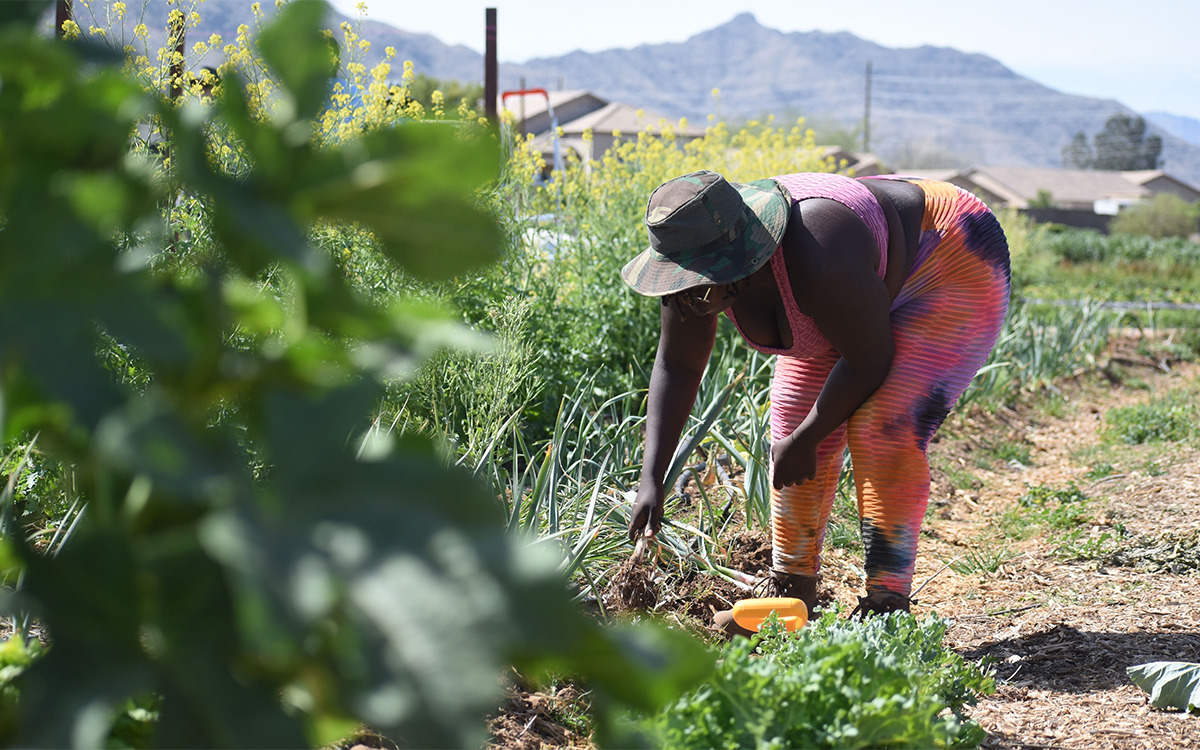 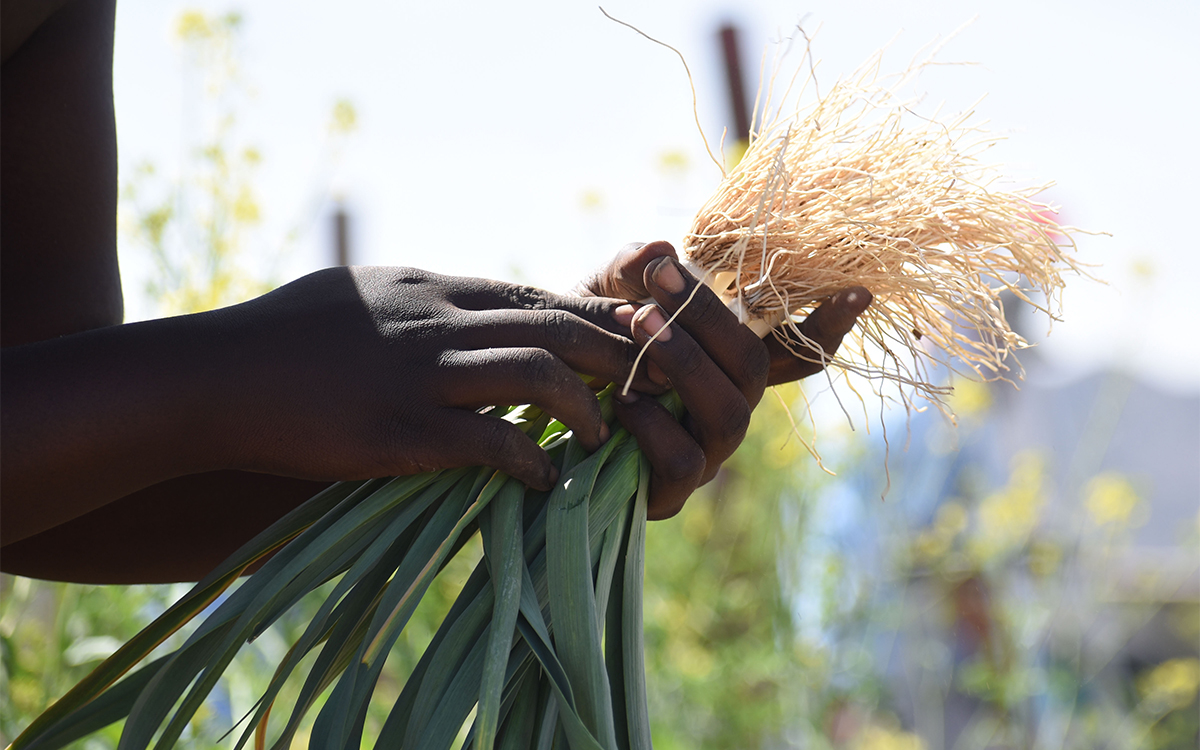 Angelica Willis-Smith harvests garlic in the Project Roots garden in south Phoenix on March 25. “Everybody’s got to eat, and, if you know how to grow your own food, then you can sustain yourself,” she says. (Photo by Hope O’Brien/Cronkite News) 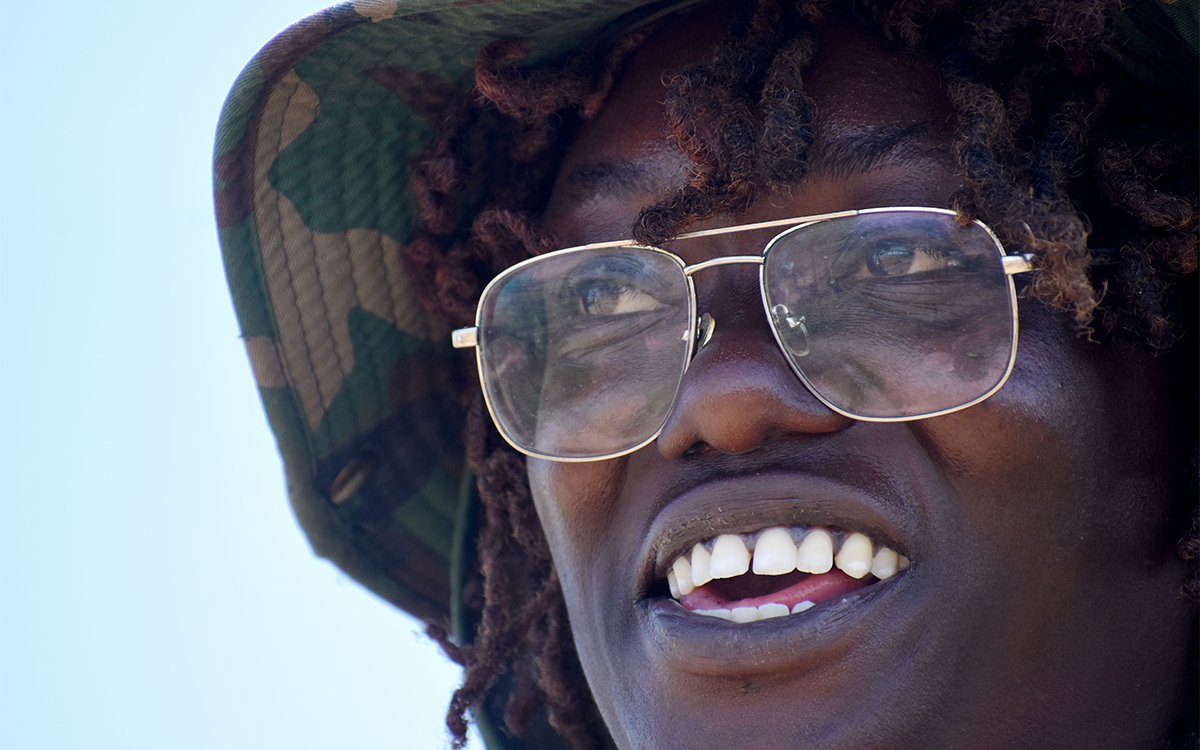 “Being here, it’s a magical place, and I think everybody needs to start getting more connected to their environment,” Angelica Willis-Smith says. (Photo by Hope O’Brien/Cronkite News) 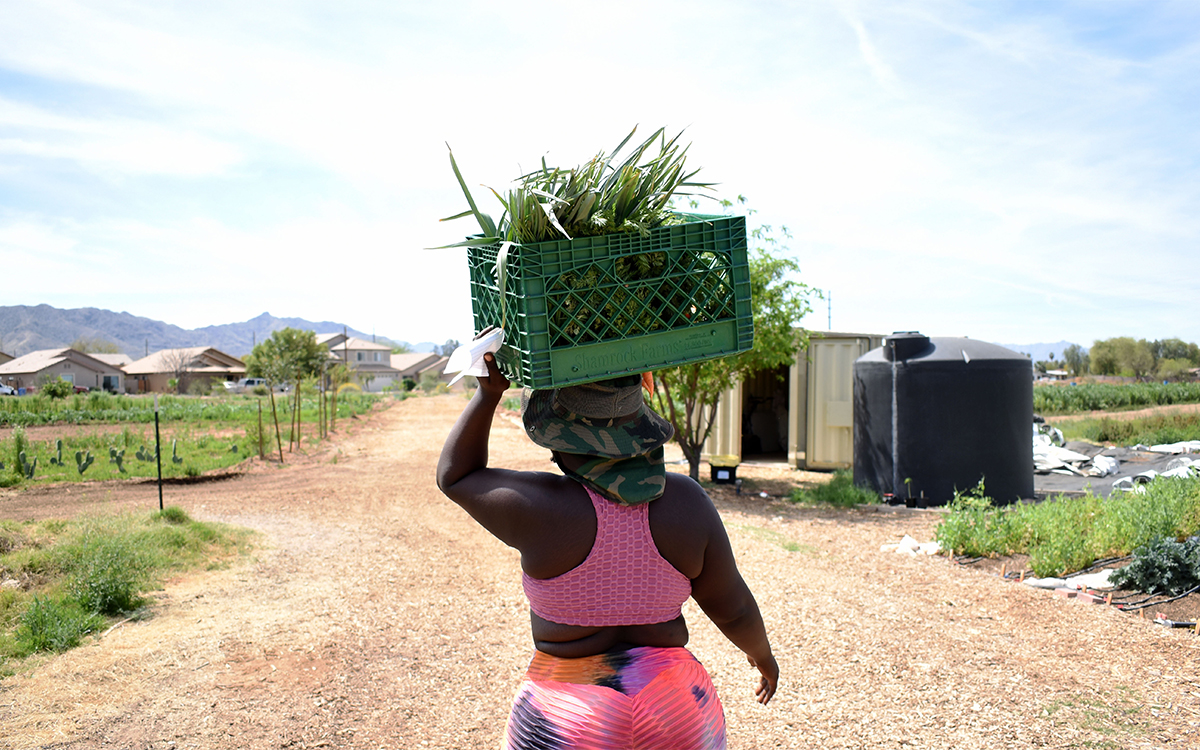 Angelica Willis-Smith carries harvested vegetables to a wash station at the Spaces of Opportunity, a 19-acre plot that includes Project Roots and other community gardens. The produce will be sold at the weekly Downtown Phoenix Farmers Market. (Photo by Hope O’Brien/Cronkite News) 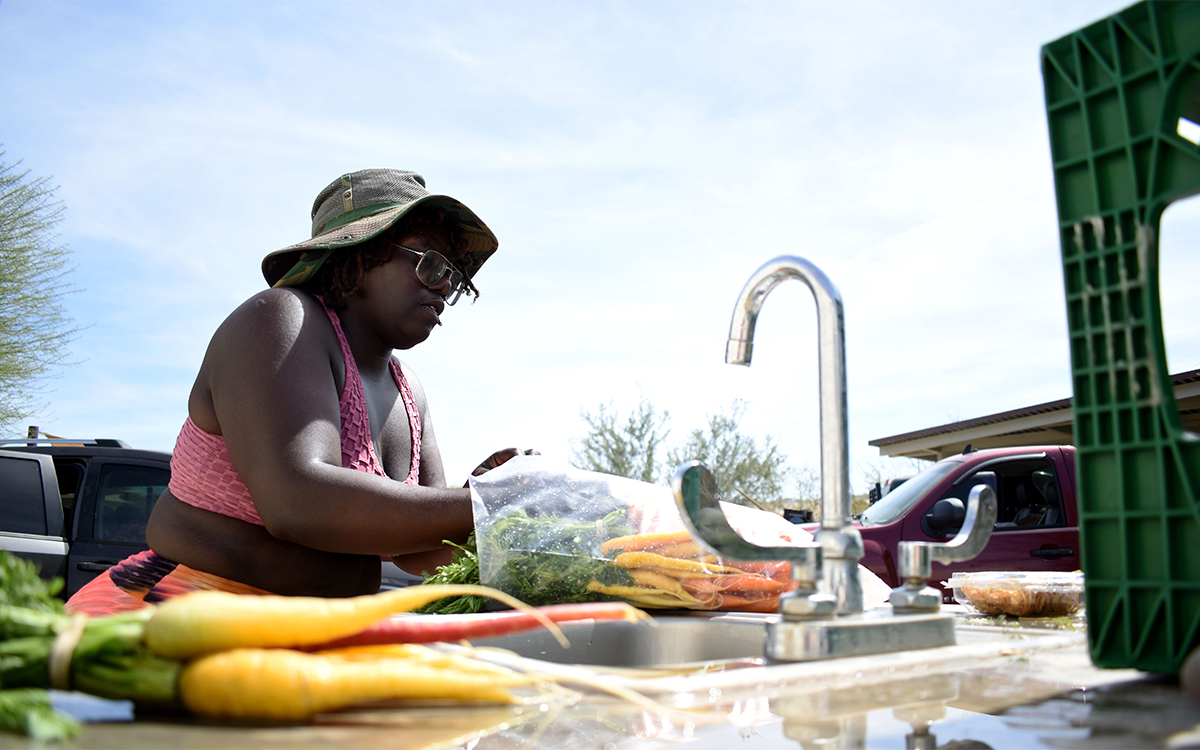 Angelica Willis-Smith washes and packages carrots at the Project Roots garden in south Phoenix on March 25. In 2017, there were 1,144 small farms in Maricopa County. (Photo by Hope O’Brien/Cronkite News)

PHOENIX – The 19-acre garden plot is tucked between the homes of south Phoenix and overlooked by South Mountain. On a recent Friday, Angelica Willis-Smith harvested garlic and carrots to sell at the Downtown Phoenix Farmers Market.

Willis-Smith, who’s known as “Jelly” in the garden, is one of nine fellows in the Phoenix Office of Environmental Programs’ Urban Agriculture Fellowship Program, which places Phoenix residents ages 18 to 24 with urban farms to train them.

According to the U.S. Department of Agriculture, urban agriculture includes community gardens, warehouse and other farming innovations that are cultivated, processed and distributed in “urban and suburban settings.”

Willis-Smith will spend up to 20 hours a week for 50 weeks at Project Roots, where she’ll learn to plant, harvest and cultivate the city’s urban cropland. The nonprofit Project Roots aims to educate and feed the community through urban agriculture.

The fellowship program, funded by the American Rescue Plan, was created to address challenges brought to light through interviews with 22 urban farmers in Phoenix during the COVID-19 pandemic, the city’s Joseph Rossell said.

“We began to understand that there were some challenges finding apprentices and finding that next-generation workforce when it comes to urban agriculture,” said Rossell, food systems program manager for Phoenix.

According to the USDA’s Arizona 2017 Census of Agriculture, the average age of farm producers in Arizona is nearly 60. Producers include people involved in making decisions for farm operations, the report said.

“It’s empowering to know that I can set a trend that is for the betterment of everybody,” Willis-Smith said.

Feeding a community and training a new generation 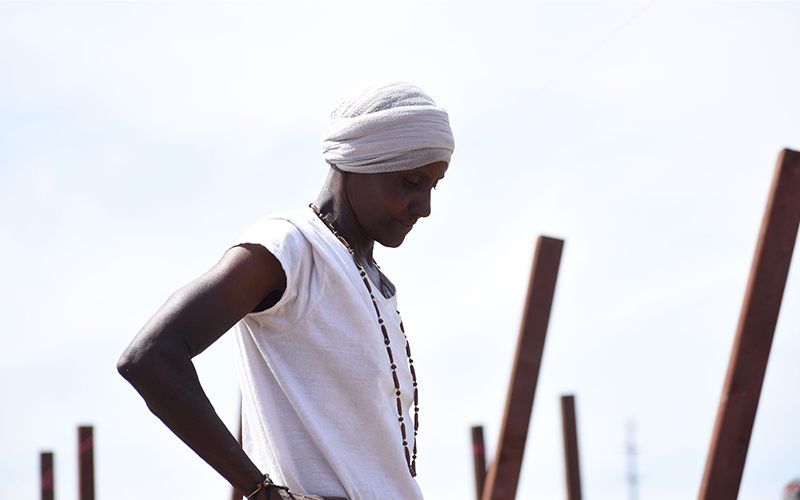 Bridget Pettis stands in the Project Roots garden in south Phoenix on March 25. “I want to see where we have gardens again in our backyards, and we have access to food,” says Pettis, the group’s president and co-founder. (Photo by Hope O’Brien/Cronkite News) 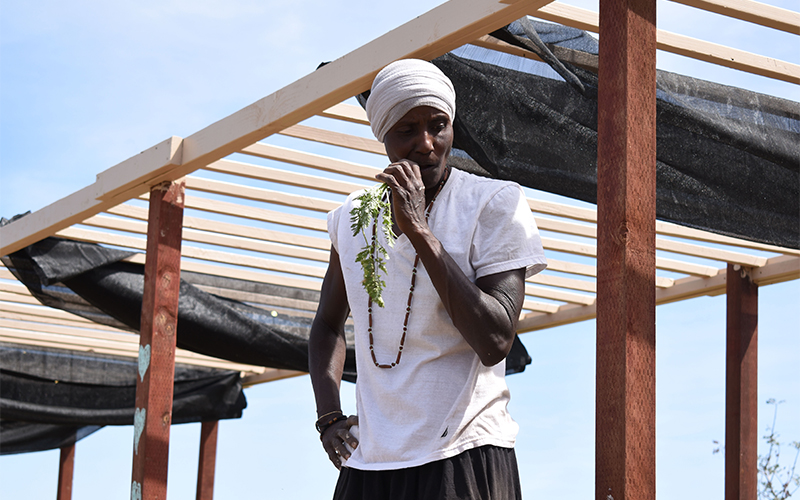 Bridget Pettis, president and co-founder of Project Roots, samples a carrot harvested from the garden in south Phoenix. (Photo by Hope O’Brien/Cronkite News) 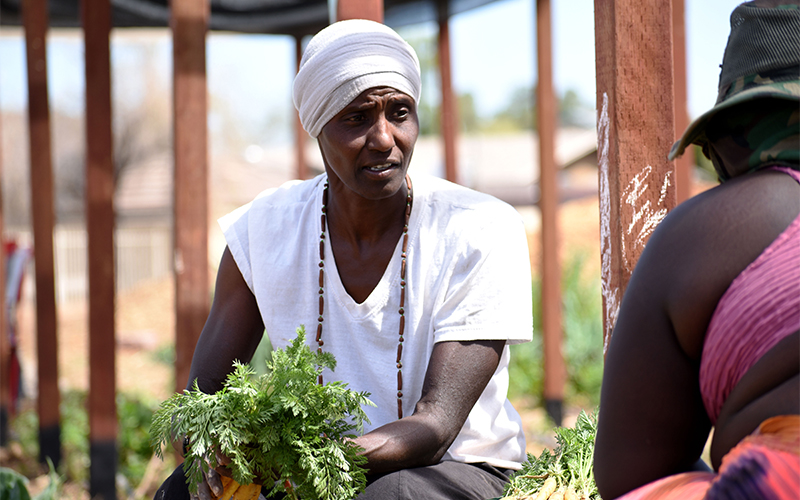 Bridget Pettis, who used to play and coach in the WNBA, works with Angelica Willis-Smith to harvest vegetables, which will be sold at farmers markets. (Photo by Hope O’Brien/Cronkite News) 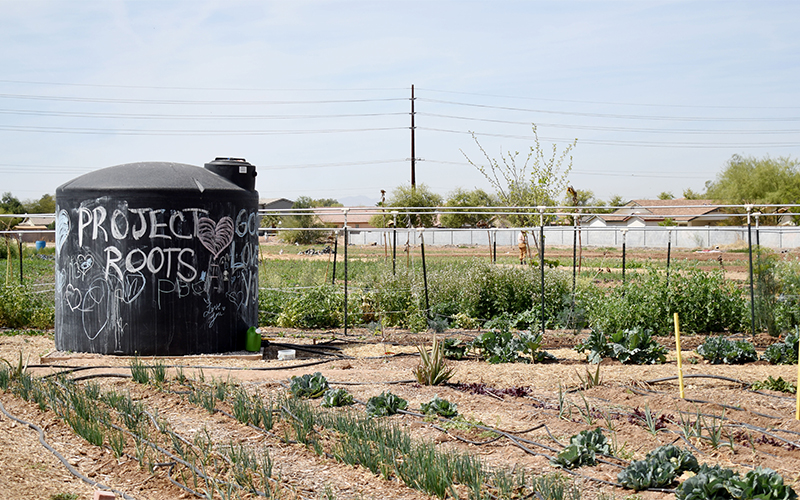 Bridget Pettis, who played for the Phoenix Mercury and later coached in the WNBA, left her sports career to co-found Project Roots, a nonprofit she said was created to properly feed the community, in 2019.

“I was donating to the food bank, and I realized I was having a hard time just giving canned foods to people, and I didn’t feel like it was really doing the things it needed to do, which is to nourish our body,” Pettis recalled.

The half-acre Project Roots garden is at Spaces of Opportunity, a 19-acre plot in south Phoenix that supports multiple small gardens and incubator farms.

Dionne Washington, the treasurer and co-founder of Project Roots, said the organization hopes to expand by creating a mobile kitchen that can bring fresh produce directly to the community.

Pettis sees the future of urban farming – including training aspiring farmers like Willis-Smith – as a way to become sustainable and reconnect with the land.

“It’s giving our next generation the opportunity to learn about growing food again, about the land, about being sustainable,” Pettis said. “What we’re doing here is something that the whole world connects to: everybody eats food, everybody needs to nourish their bodies, and this is what this space is bringing people back to.”