Arizona’s wildflower season has been affected by our dry winter. This year’s color show is a far cry from the “superbloom” of 2019. 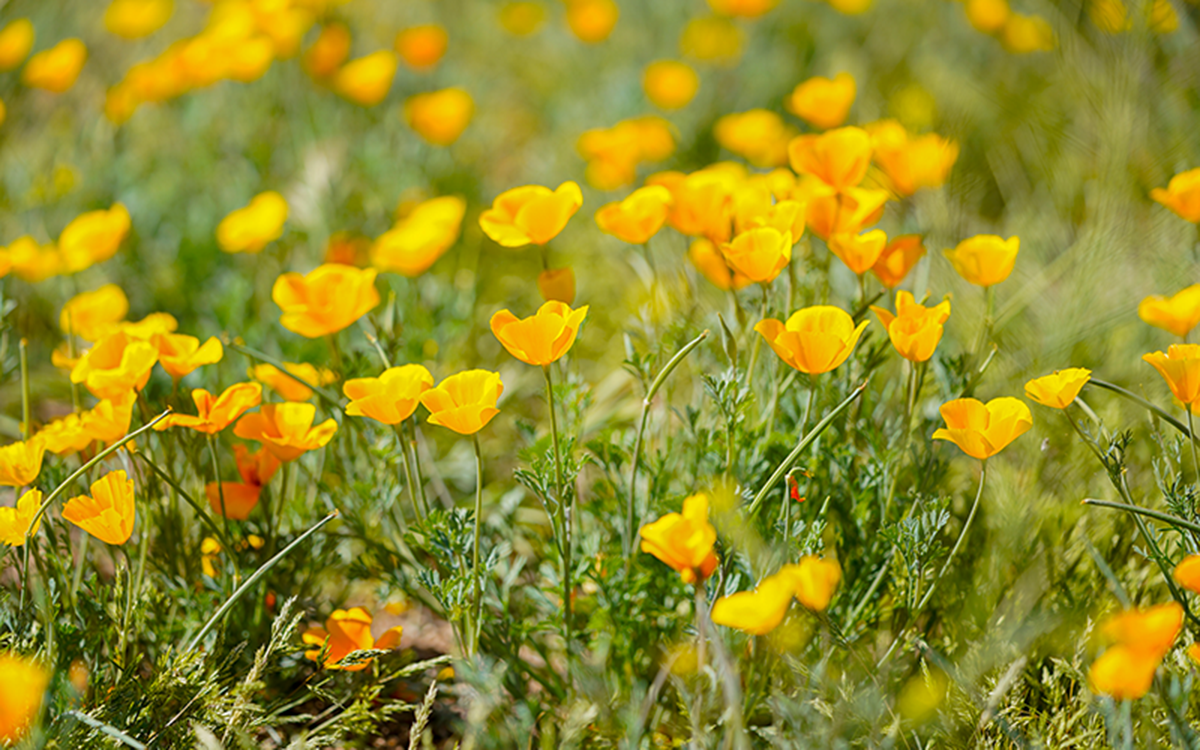 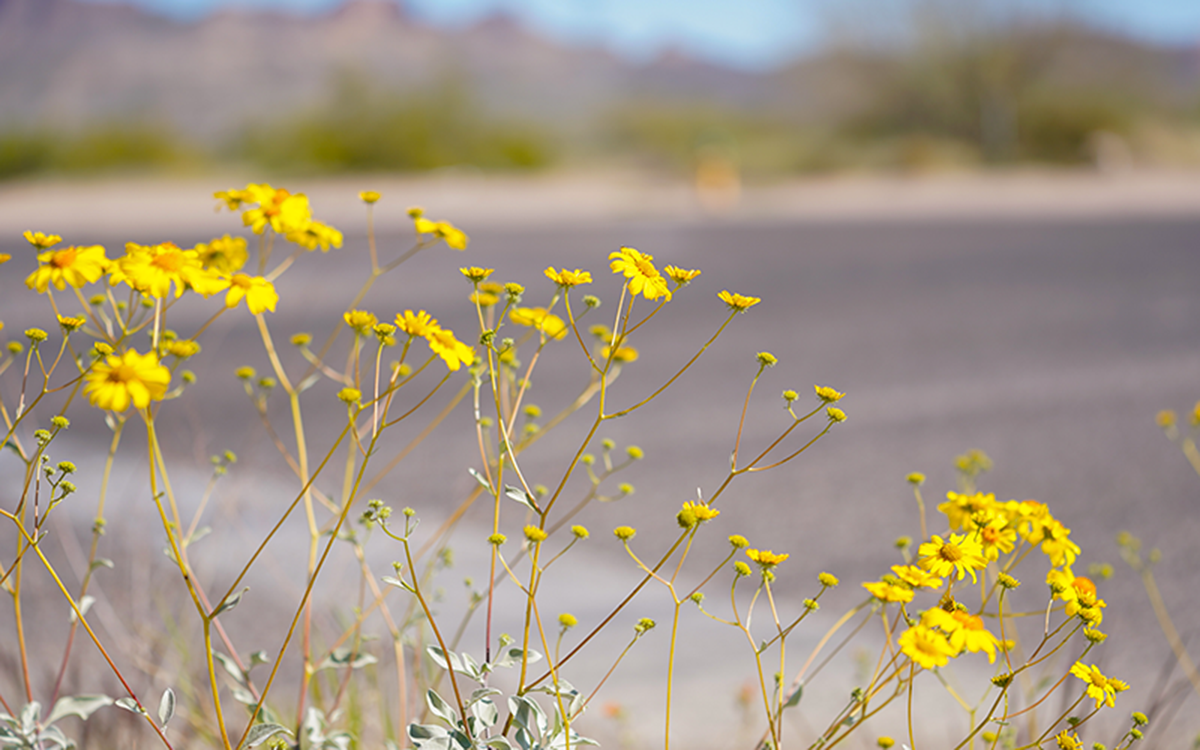 Brittlebush bloom near Meridian Drive and Brown Road in Apache Junction. When the summer heat sets in, the perennial shrub will shed its blooms and dry out to conserve moisture. (Photo by Samantha Chow/Cronkite News) 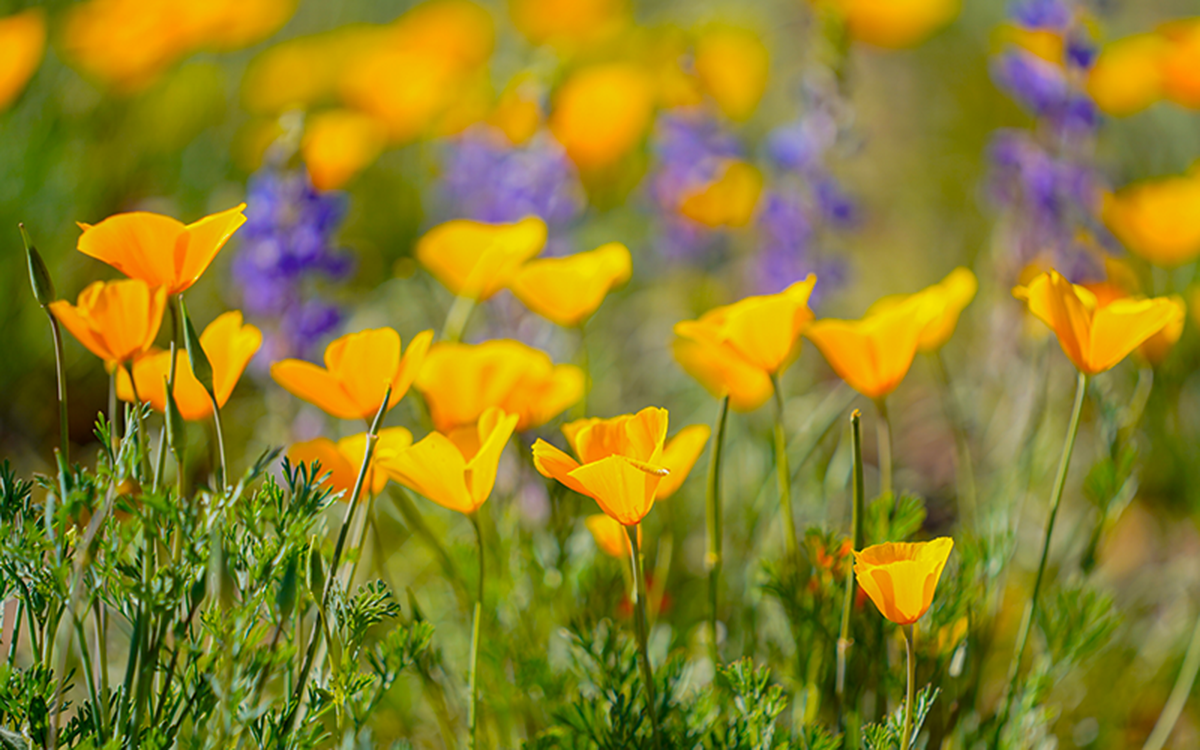 Mexican poppies and lupine bloom outside Lost Dutchman State Park in Apache Junction. Lupine is a bluish-purple perennial that can grow to 3 feet tall. (Photo by Samantha Chow/Cronkite News) 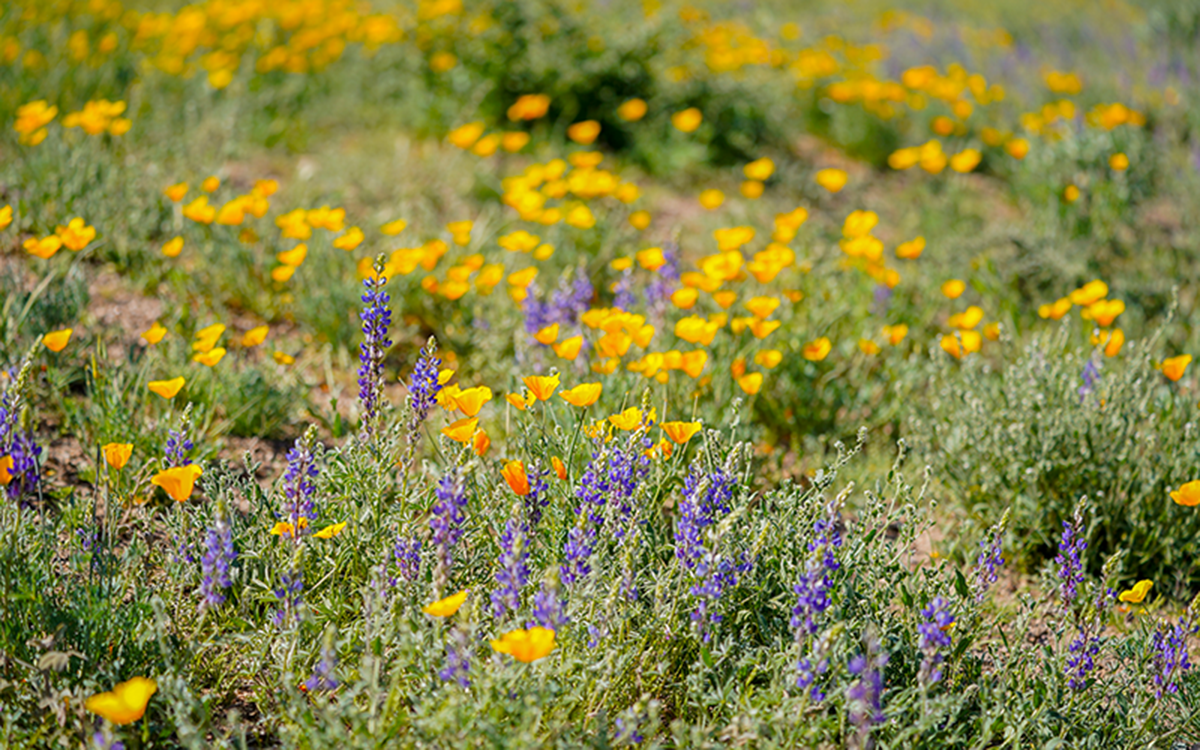 Mexican poppies and lupine grow outside the Lost Dutchman State Park in Apache Junction on March 17, 2022. Other spots to see wildflowers are South Mountain, the Superstition Mountains and Estrella Mountain. (Photo by Samantha Chow/Cronkite News) 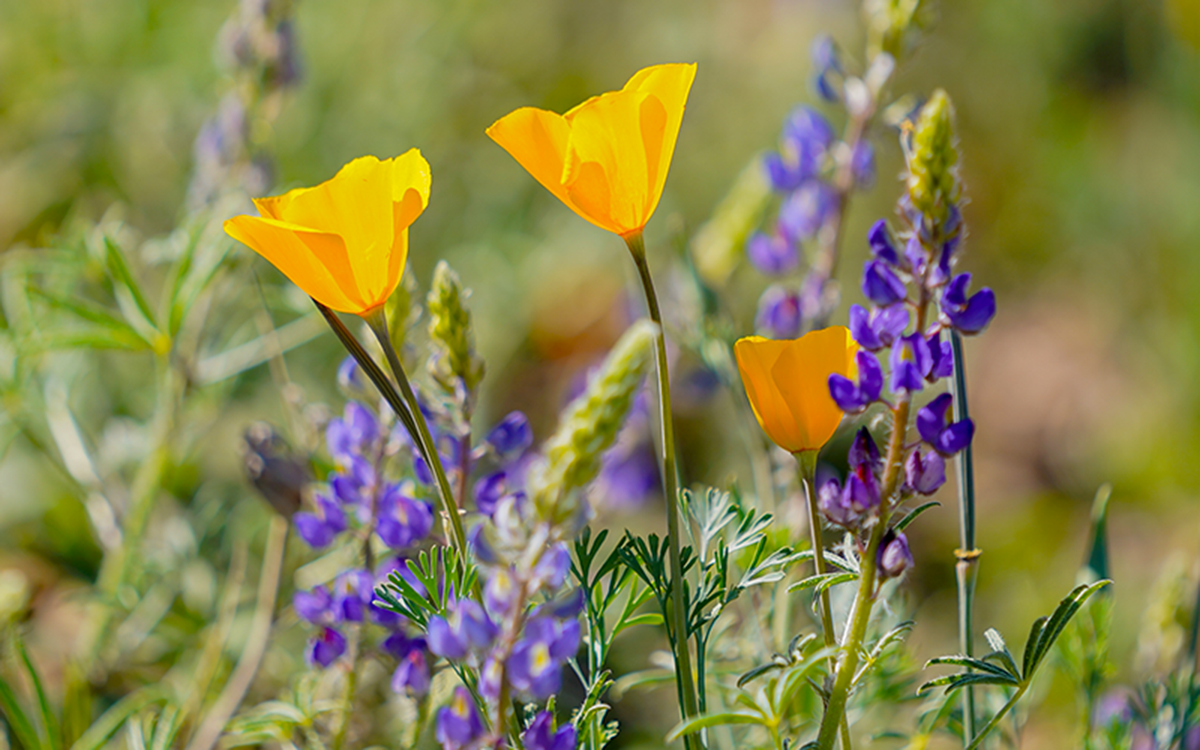 Mexican poppies and lupine bloom outside Lost Dutchman State Park in Apache Junction. To germinate, wildflowers depend on timely winter rains and moderate soil temperatures in the fall. (Photo by Samantha Chow/Cronkite News) 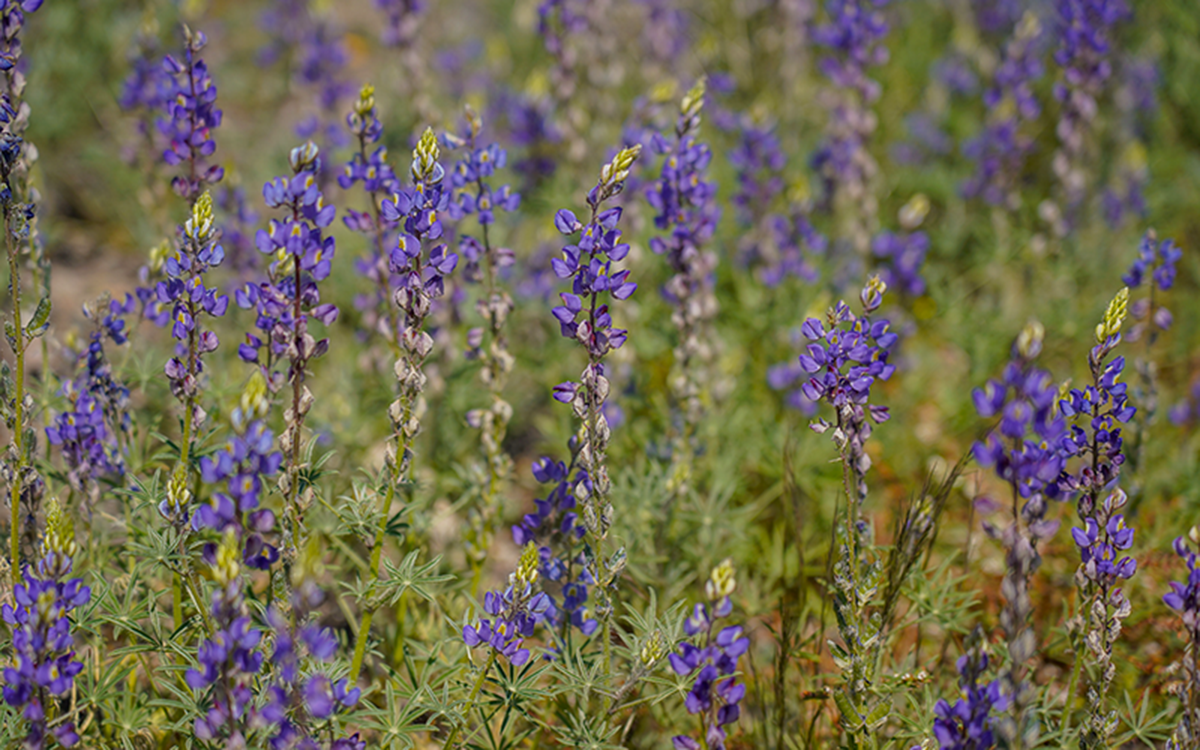 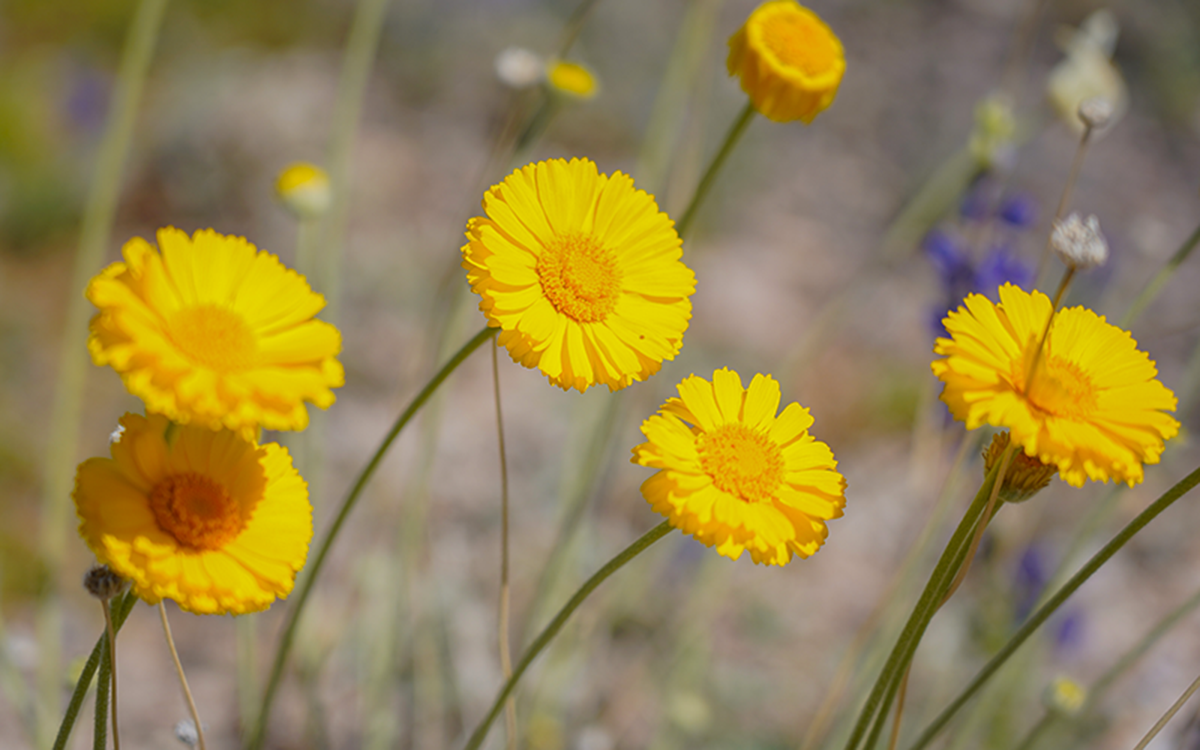 Desert marigold bloom outside Goldfield Ghost Town in Apache Junction on March 17, 2022. The perennial can be found in Arizona, southern Nevada and southwestern Utah, as well as in Sonora, Mexico, and Texas. (Photo by Samantha Chow/Cronkite News)

APACHE JUNCTION – Poppies are beloved wildflowers in Arizona. Their vibrant orange and yellow petals stand out against the drab desert and signify the coming spring.

But Arizonans won’t have much luck finding many poppies this year. And some experts fear the future will have fewer Mexican and California poppies – as well as lupine, chicory, fiddlenecks and a host of other wildflowers – as the Southwest continues to heat up and dry out.

This wildflower season is “below average,” thanks to “a really dry winter,” said Michelle Thompson, chief of communications for Arizona State Parks & Trails.

“Even though we had some rain late in the winter, it was already past the germination period,” she said.

A “spectacular wildflower season” requires at least 1 inch of rain per month from October to March, she said, and soil temperatures in the fall need to range from 50 to 60 degrees to enhance germination.

“(These) seasons happen maybe once every 10 to 15 years,” Elliott said. “These are mass carpets that just knock your socks off.”

Although there weren’t any carpets this year, flower lovers can find “little throw rugs of wildflowers”until April, Elliott said.

Thompson said one of the best places to find poppies is at Picacho Peak State Park, between Phoenix and Tucson.

The superbloom of 2019 was Arizona’s last “really good wildflower year,” Thompson said, adding, “The mountainsides (of Picacho Peak) were almost completely orange with blankets of poppies.”

Rain was a crucial factor that season.

From October 2018 through March 2019, Picacho Peak received almost triple the precipitation as the same period in 2021-22, according to the National Oceanic and Atmospheric Administration.

But Picacho Peak isn’t the only place you might find poppies this year. Thompson recommends also checking out Lost Dutchman State Park east of Apache Junction.

Elliott recommends looking for a variety of wildflowers at South Mountain in Phoenix, the Superstition Mountains near Gold Canyon and Estrella Mountain Regional Park in the southwest Valley.

“Typically a lot of our wildflowers grow in rocky soils or desert washes where rainfall naturally runs through,” Elliott said, noting that’s why wildflowers often are found along roadsides. When rain runs off the pavement, moisture accumulates and enhances germination.

“I was heading east towards the Superstition Mountains, and along the roadsides I saw quite a bit of lupine,” Elliott said. “I was surprised, but pleasantly surprised.”

Although the beloved poppies and other annual wildflowers will be scarce, Thompson and Elliott said perennials, which require less water, may still be found in small pockets. They include globe mallow, chuparosa and brittlebush.

“They’re less dependent on the rainfall,” Elliott said. “They don’t care when they get their rainfall; they’re just going to bloom.”

It’s hard to know for certain, but Elliott predicts Arizona will see more average to below-average wildflower seasons like this year’s.

“With climate change and the amount of rainfall we’re receiving in the desert, it can really impact our wildflower season,” she said.