SCOTTSDALE – “Would you like to breathe out of your nose or your mouth?” Robert Sutz asked.

“Either is fine,” replied Werner Salinger, a survivor of Nazi atrocities.

Sutz considered this for a moment, then reached for a plaster bandage, dunked it in water and laid it over Salinger’s lips. The Scottsdale artist continued applying the casting material until only Salinger’s bright blue eyes could be seen.

Forty-one minutes later, Sutz ran his fingers beneath the mold’s hardened edges and peeled it away from Salinger’s face, now preserved in a “life mask.”

Over the past 30 years, about 200 other “Holocaust survivors, liberators and righteous gentiles” – many of whom have since died – have sat in Sutz’s chair and had their faces preserved.

“It was cold, but I don’t mind cold, and it was wet,” Salinger said, laughing. “It wasn’t hurtful in any way, it was just another experience.”

Sutz will spend the next month or so painting Salinger’s mask to look lifelike – hence the name “life mask.” 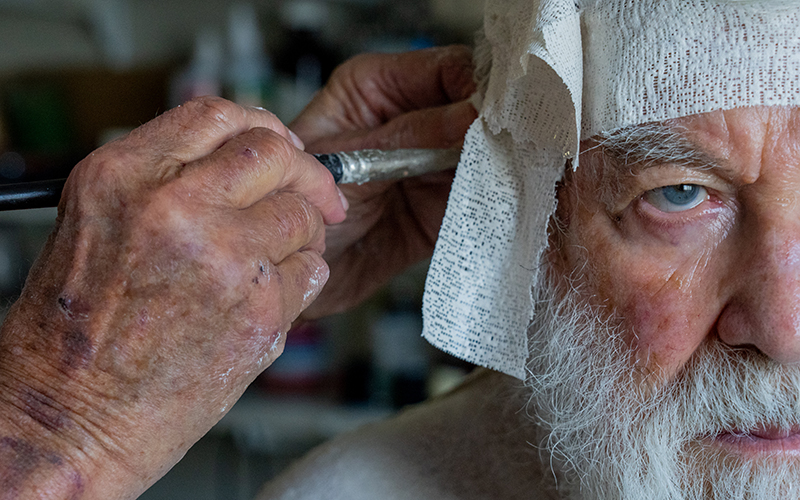 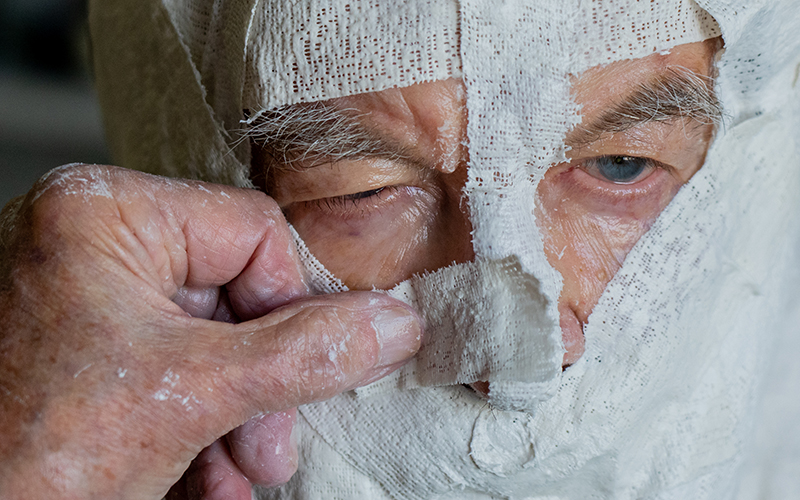 Left: Artist Robert Sutz reaches for a plaster strip at his studio in Scottsdale on Feb. 12, 2022. The strips are the same cloth material medical personnel use to make casts for broken bones, he says. Center: With the help of a paint brush, Sutz places a plaster bandage on Holocaust survivor Werner Salinger’s ear. Right: Artist Robert Sutz uses his thumb to shape a plaster bandage around Salinger’s nose. (Photos by Samantha Chow/Cronkite News)

Along with casting their faces, Sutz captures his subjects’ stories on video and paints scenes they recall from the Holocaust – the genocide of an estimated 6 million people in Adolf Hitler’s “Final Solution” from 1941 to 1945.

Salinger’s story goes back to Kristallnacht, or the Night of Broken Glass, in 1938. On Nov. 9 and 10, Nazis torched and vandalized thousands of Jewish synagogues, homes, schools and businesses across Germany. About 100 people were killed and 30,000 Jewish men were arrested and sent to concentration camps.

“I remember very vividly the broken glass – I could see it from our apartment across the street – and the smoke from the burning synagogue was just a block away,” said Salinger, 89. “It was a very vivid memory for me; I was 6 years old.”

“I’m doing this really for my parents,” Salinger said. “They would be very proud to know of my involvement today.” 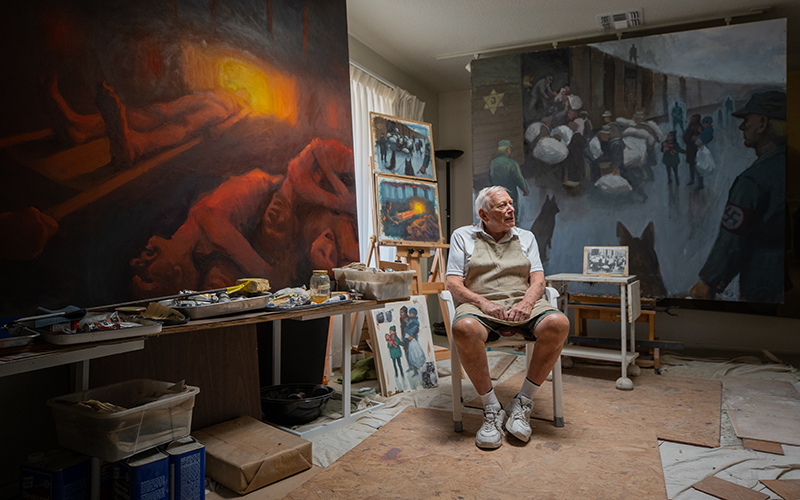 Artist Robert Sutz sits in his art studio in Scottsdale on Feb. 12, 2022, next to several of his oil paintings. The two large paintings to his left and right will become part of a 42-foot art installation depicting the horrors of the Holocaust. (Photo by Samantha Chow/Cronkite News)

Sutz, who is 92, said his inspiration for creating life masks comes from his father, President Abraham Lincoln and film director Steven Spielberg.

His father, who was Jewish, was born in Bialystok, Poland, but moved to Chicago when he was 12. Years later, when Hitler began his rise to power, Sutz’s father tried to warn his family and get them to move to the U.S., but they refused.

“They thought that Hitler was a crazy man and that people aren’t going to pay attention to him,” Sutz recalled.

The rest of the family later died in concentration camps.

Many years later, shortly after Sutz’s 13th birthday, he visited an exhibit where a life mask of Abraham Lincoln was on display.

“I got the chills because I felt his presence. It was something that really excited me,” Sutz said. “I told myself at an early age that I would like to learn how to make life masks.”

He eventually began making masks of family members, but it wasn’t until the 1990s that Sutz found a deeper purpose for creating life masks. 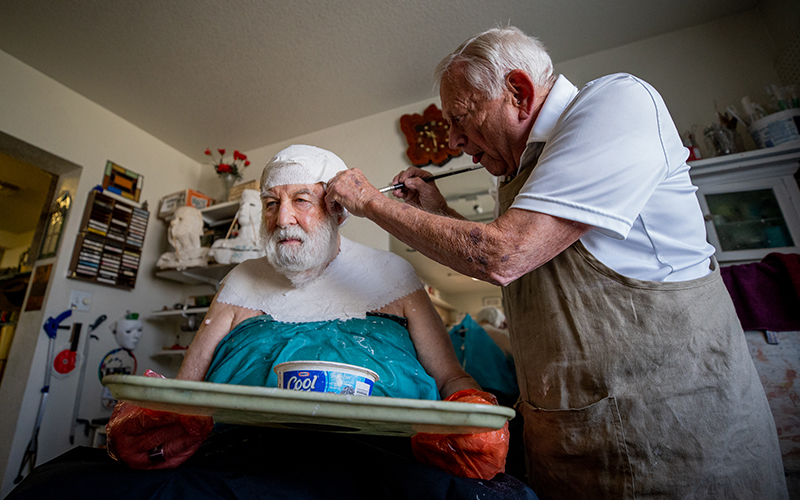 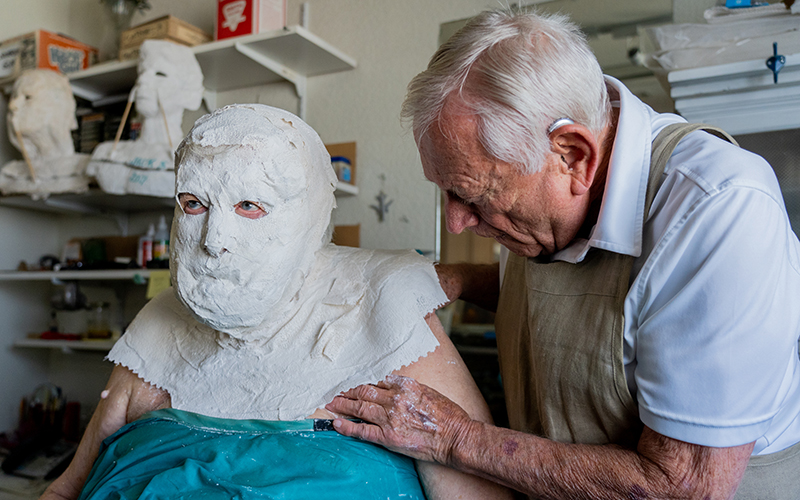 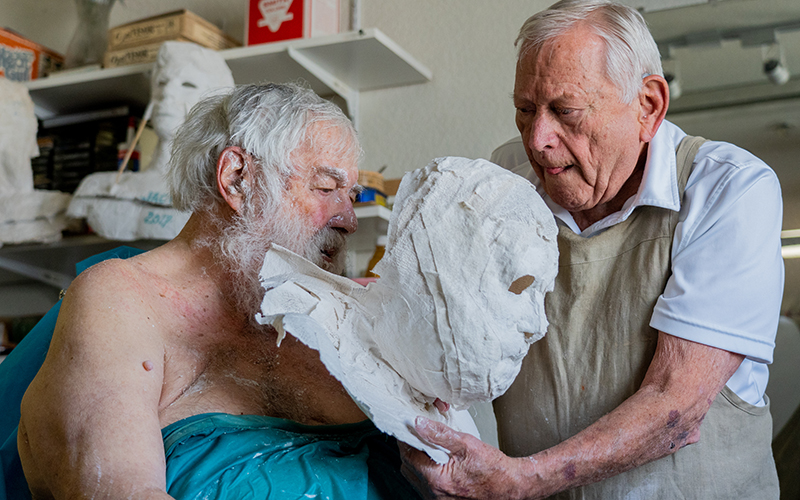 He came across an article in the Chicago Times recruiting people to join the visual history project run by Spielberg’s Shoah Foundation. Sutz was accepted into the group and went through a three-day training on how to interview Holocaust survivors.

Sutz then connected the dots and began making life masks of “Holocaust survivors, liberators and righteous gentiles,” as he puts it. Some of the first life masks in Sutz’s Holocaust collection came from doing these interviews.

“It’s a funny thing, I’m doing this now and Spielberg is unaware of what I’m doing, but he kind of introduced me to survivors,” Sutz said.

For nearly 20 years, Sutz took the masks on a traveling exhibit across the country, but eventually it became too difficult. Now, about 200 masks are in his art studio east of Old Town Scottsdale.

Sutz recently found a new home for his collection with the Arizona Jewish Historical Society – although it won’t be on display for at least a couple of years. 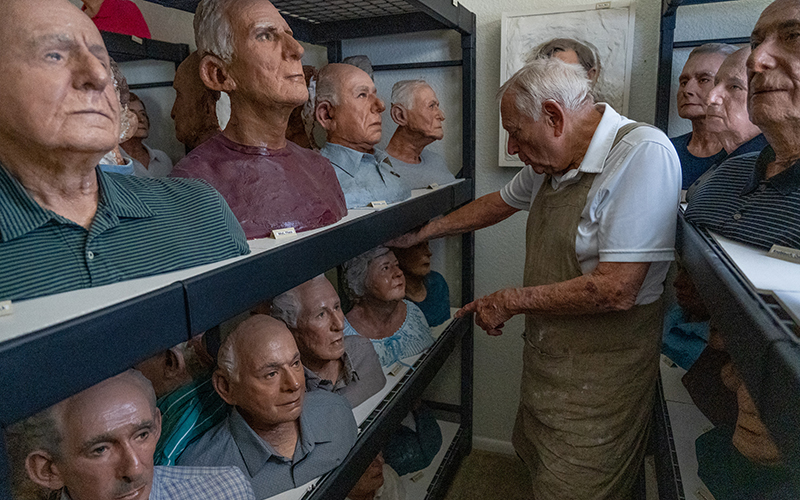 Robert Sutz looks at some of his completed life masks at his art studio in Scottsdale on Feb. 12, 2022. He began making the masks in the 1990s while working for Steven Spielberg’s Shoah Foundation. (Photo by Samantha Chow/Cronkite News)

The society plans to build a museum to educate people about genocides throughout history.

“This would give people a place to go here locally to learn about the Holocaust (and) learn about other atrocities, as well,” said Lawrence Bell, director of Arizona Jewish Historical Society.

So far, the society has raised $5 million toward its goal of $15 million to build the museum. Bell said the goal is “to finish fundraising in 2023 and then maybe build it in 2024.”

Sutz’s life masks, along with some of his other Holocaust artwork, will be featured.

“I think the total grouping will just be awesome reminders that in one way shape or form these people went through some tough times,” Salinger said of the mask collection.

Sutz plans to keep creating life masks for as long as he can.

“I want to keep doing what I’m doing,” he said. “I just hope I can stay well enough to do more.” 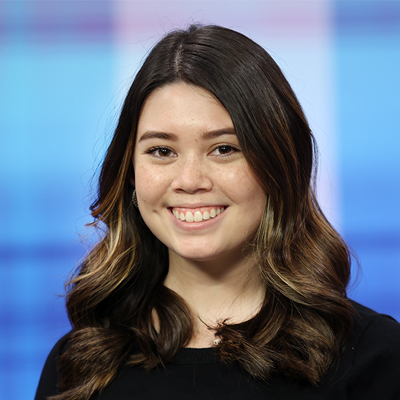 Samantha Chow expects to graduate in May 2022 with a bachelor’s degree in journalism and plans to pursue a master’s degree in mass communication. Chow, who has interned as a photographer with Arizona Highways, Phoenix Magazine and Mesa Public Schools, is a photographer at ASU Media Relations. She is working in the Phoenix news bureau.