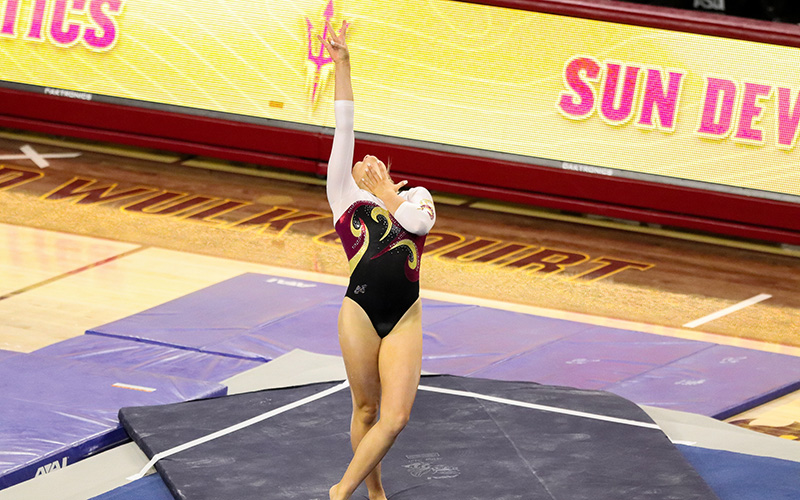 TEMPE – When the Arizona State gymnastics team held its annual intrasquad scrimmage in December, the maroon team beat gold by the slimmest of margins – just two-hundredths of a point.

The final scores for both sides suggested a strong, competitive ASU squad. But after the scrimmage, coach Jay Santos said what the gymnasts have “been doing in practice is stronger than what we showed.”

That’s because expectations are high. And self-imposed. The No. 12 Sun Devils hoped for a measuring stick tonight in their scheduled season opener against No. 13 Kentucky, but the meet was canceled Tuesday due to recent COVID-19 developments within the ASU program.

Last season, ASU gymnastics finished third at the NCAA Regional Final and missed out on a team bid to the NCAA Championships. The team faced six ranked opponents in its 10-meet season, and ASU lost to five of them. It was still a historic end to a historic season, one that saw Cairo Leonard-Baker and Hannah Scharf secure individual bids to the championships.

Leonard-Baker graduated but Scharf is ready for her junior season and ASU needs help from its young gymnasts to reach its ultimate goal: a team bid to the NCAA Championships.

“Last year, we had a team I thought was capable of being that competitive. I think they showed that at regionals that they were capable of competing with Utah, LSU, Kentucky at that meet,” Santos said. “I think this year, on paper, we’re a little bit stronger, we’re a little bit deeper, a couple upgrades are going well. So, I mean, then it comes down to execution in the moment and doing what we really trained to do (to make nationals).”

ASU is capable of making nationals as a team, and the team will have plenty of opportunities to prove its competitiveness this season. That starts with a big early season challenge: ASU faces defending champion Michigan in Ann Arbor on Jan. 15. 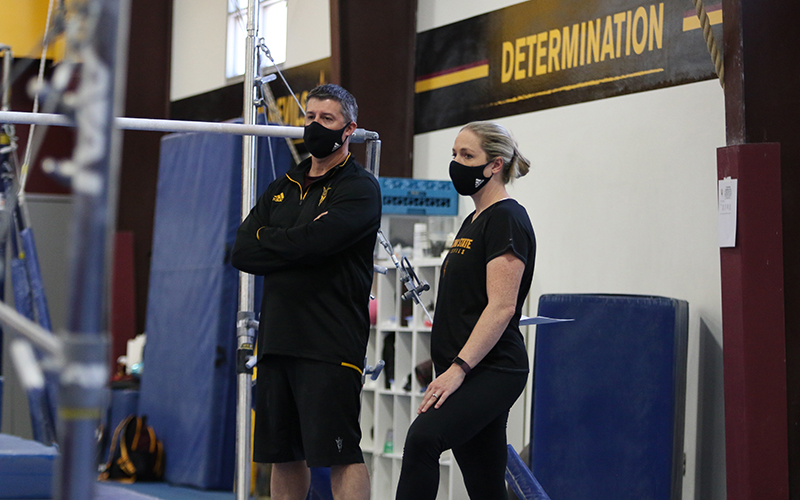 The consensus is this meet is the one the team is looking forward to most. Coaches Jay and Jess Santos have experience coaching at Michigan, and both said they’re excited about the atmosphere and competition that comes with facing the reigning champion.

There might be one ASU gymnast more excited about competing against Michigan: Scharf, who was offered a walk-on spot by the Wolverines.

ASU’s second-team All-American in the all-around spent her offseason intensifying her workouts and upgrading her routines. Competing individually at the NCAA Championships allowed her to watch the skill level of other elite collegiate gymnasts, Jess Santos said.

“Hannah was so solid last year,” she said. “She wanted to try to upgrade some. I think when she was at the national championship, she saw that little tiny bit of difference of some of the teams that were there with some higher skill level, particularly vault and floor. I think her bars and beam have had that difficulty for a long time.

“So she’s working upgrades and really close. We’ll see if they get in there.”

The young ASU team has an uphill climb to compete at the highest level of collegiate gymnastics, especially with the loss of Leonard-Baker. Jay Santos said no individual gymnast will replace what Leonard-Baker brought to the team, though it appears that freshman Alex Theodorou has the ability to contribute immediately. At the intrasquad scrimmage, Theodorou posted the highest scores on vault, beam and floor, respectively.

Meanwhile, the team awaits word on whether the Kentucky meet whether will be rescheduled.