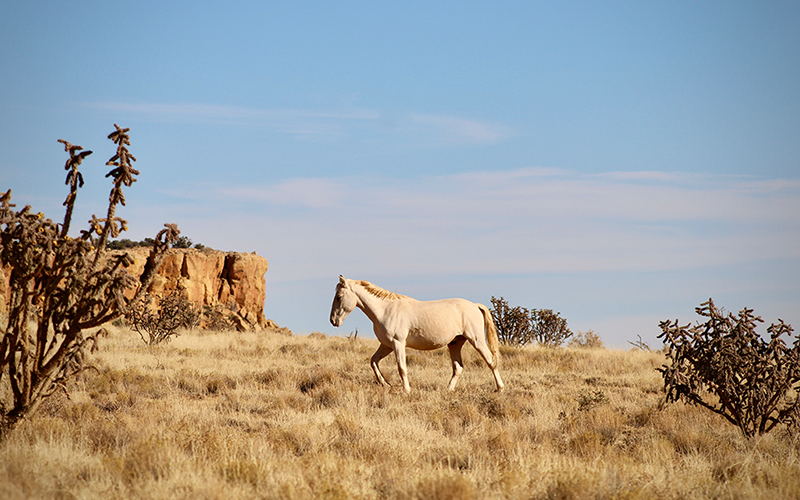 The winding dirt road to Frank Pablo’s house passes by sandy cliffs and roaming horses. He often makes the long and expensive drive to stores in Albuquerque to stock up on crates of bottled water for drinking. (Photo by Alex Hager/KUNC) 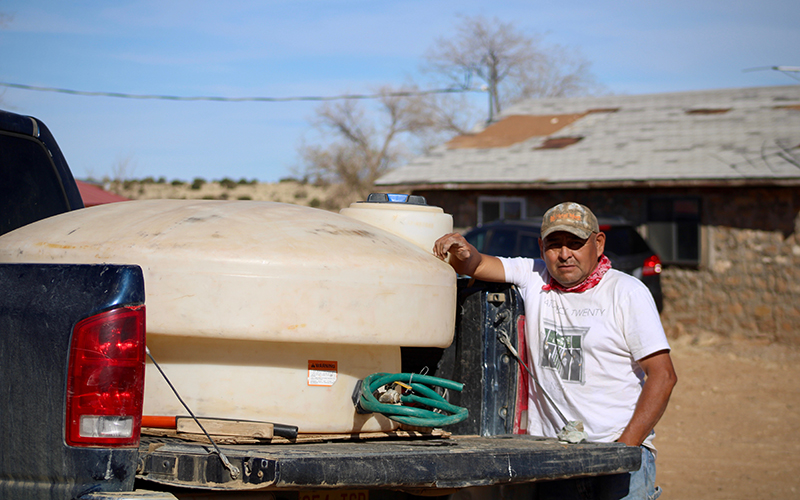 Frank Pablo hauls water in the back of his truck, and relies on bottled water for drinking. People living in To’hajiilee, New Mexico – one of many tribal communities that lack safe water infrastructure – don’t have access to piped clean water. (Photo by Alex Hager/KUNC) 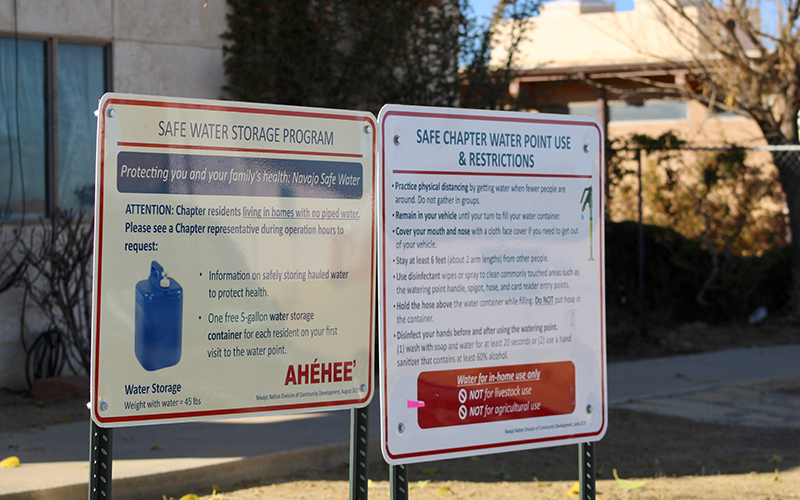 TO’HAJIILEE, New Mexico – The interstate leading out of Albuquerque turns from city to desert in the blink of an eye. One minute, office parks give way to houses and apartments. The next, those homes give way to scrubby desert bushes and dusty, beige plains that melt into low mountains on the horizon.

It’s not long before you reach the exit for the Navajo town of To’hajiilee. Here, just outside a U.S. city with half a million people, you’ll find taps that deliver water black with sediment and orange with rust, and where nearly 2,000 residents rely on truckloads of water for drinking.

Across the country, 49% of tribal homes do not have access to reliable water sources, clean drinking water or basic sanitation. Homes in To’hajiilee are no exception. As the town’s aging wells have crumbled, water quality has degraded to the point that it’s not safe to drink, and a project that promises a steady clean supply has faced years of logistical hurdles.

“Our water here, it sometimes comes out like the color of the sand,” said Nora Morris, who was born and raised in To’hajiilee and now works at its senior center.

Many residents shuttle water in from Albuquerque, mostly stopping at Walmart to fill jugs or stock up on bottled water by the crate.

“I have to haul water for daily use,” Morris said. “The days that we feed, I have to have good, potable water. We have to utilize safe water to make sure we’re cooking with safe water and to sanitize our pots and pans.”

Another To’hajiilee resident, Rheana Apachito, also brings bottles from Albuquerque. But she is left with piped water for showers.

“In the past couple years it’s been more like orange,” Apachito said. “On our hair, it makes it hard. Our skin is drier. Sometimes it comes out orange, brown, black.”

Others don’t rely on water from the town’s pipes but still contend with a great deal of inconvenience and expense. Frank Pablo’s home on Moon Mesa, a high-altitude perch on the outskirts of town, is off the grid. All the water Pablo and his mother use on this property, where he grew up, arrives in the back of his pickup truck.

He hauls crates of bottled water for drinking, and a thick plastic tank strapped into his truck bed carries water for everything else. He fills that at a nearby well, off to the side of the hilly dirt road that leads to his house.

“There’s a big sign that says ‘Not for human consumption,’ but we have no choice but to go down and get it,” Pablo said.

Those trips for water get expensive. Each visit to Walmart begins with a half-hour drive down that dusty road, winding past roaming horses and rocky cliffs before he gets to Interstate 40 and starts the next half hour to the city.

But he’s committed to staying at his childhood home. “It’s nice and peaceful up here, I wouldn’t live anywhere other than here,” he said. 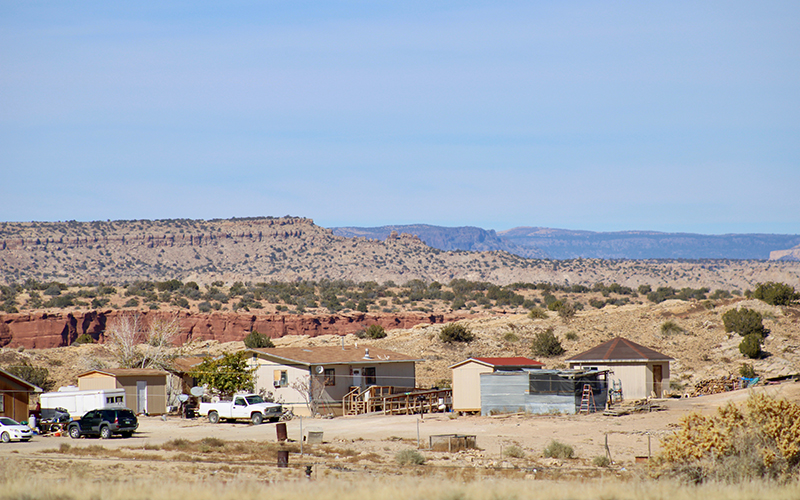 Although To’hajiilee is only a short drive from a major American city, the roughly 2,000 people who live there lack access to clean water. (Photo by Alex Hager/KUNC)

A fix is coming soon

Hauling clean water is simply a fact of life for To’hajiilee’s residents, as it is for many Native people in the Southwest. But a change to that routine is in the works

For a long time, the town’s geography has been a source of frustration, as wells beneath town have dried up one by one. Mark Begay has operated the town’s water system for more than 30 years and has seen that play out firsthand.

“Out of those six wells,” he said, “only one is still running as of right now. All the other wells have either collapsed or just stopped running. We’re only dealing with one distribution well, so we’re in a water crisis here in To’hajiilee.”

But now, a different aspect of To’hajiilee’s geography means the town will soon receive piped water from the same source that supplies Albuquerque. To’hajiilee is a satellite community of the Navajo Nation, the contiguous body of tribal land that begins about two hours to the west. In this way, it’s an island, separate from “Big Navajo,” as the locals call it.

Since 2006, To’hajiilee has been working out the details of that new pipeline – the fruits of an agreement with the Albuquerque Bernalillo County Water Authority. Begay expects water will start flowing in 2023. On its face, the deal is a revolutionary and permanent solution after decades of struggles, but the journey to that solution has been strewn with hurdles.

“The frustration has come from various different entities and setbacks,” said Sherrilyn Apache, Tohajilee’s community services coordinator. “Whether it was grant funding, a property owner, land ownership or rights-of-way.”

Nearly 20 years of research, planning and fundraising met perhaps their largest roadblock when a private development firm looked poised to block construction of the pipeline through land it planned to use for tens of thousands of new homes.

With the support of area politicians and advocacy groups, an agreement was eventually reached in late 2020, clearing the way for the 7.3-mile pipeline.

“It’s kind of terrifying to know we did once upon a time own the majority of the lands,” Apache said. “Why do we have such a hard time regathering our land, or the acreage of our land, to move forward?”

Even with permission to construct the pipeline, the challenge of paying for it still lingered. With building costs in the ballpark of $8 million, To’hajilee has had to secure money from an array of sources.

A large chunk comes from New Mexico’s state water board, with other money coming from the Navajo Nation. But millions of dollars in construction funding were distributed as loans or grants that required matching contributions from To’hajiilee, which the community didn’t think it would be able to pay.

On top of that, the costs of getting and maintaining a clean water system in To’hajiilee go well beyond the new pipeline itself. Many of the pipes that carry water within town are made of asbestos cement. Replacing the pipes is necessary, expensive work that can be hazardous for the people doing the job.

Mark Begay, the long-serving water utility worker, suspects that asbestos has caused long-term health issues for people living in To’hajiilee, and will continue to do so if pipes aren’t replaced – even if they carry cleaner water from Albuquerque’s system. 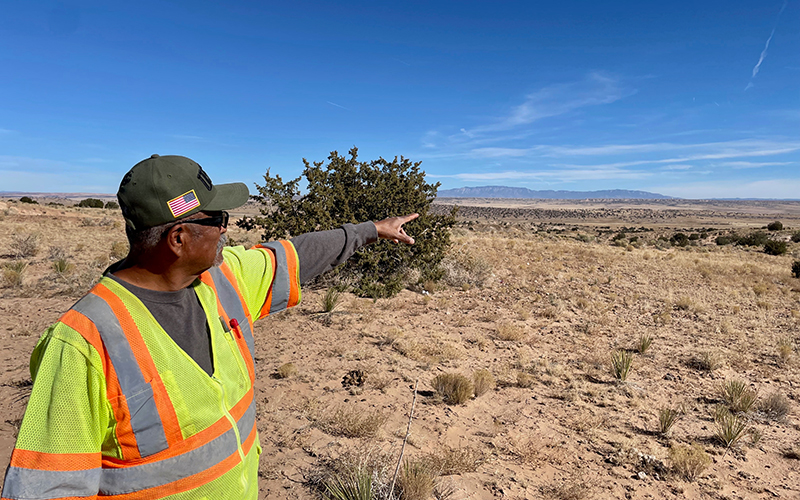 Mark Begay points east toward Albuquerque, from which a pipeline will carry clean water to To’hajiilee. Deliveries are expected as soon as 2023, but bringing the project to reality has encountered an array of logistical and financial challenges. (Photo by Alex Hager/KUNC)

Trouble accessing clean water, and the money it would take to get it, persists across the rest of the Navajo Nation. Efforts to solve the issue have gained newfound traction in the last couple of years, as pandemic-era calls for handwashing and sanitation put a spotlight on the lack of clean water in tribal communities nationwide.

Crystal Tulley-Cordova, principal hydrologist with the Navajo Nation Department of Water Resources, said new funding made available by pandemic relief programs was a “silver lining.” The bipartisan infrastructure bill allocated $3.5 billion to the Indian Health Service’s sanitation deficiency system listing, fully funding the list’s projects for the first time ever. Tribes also are expected to see portions of funds earmarked for rural water projects. Other funding from the CARES Act, a $2 trillion economic relief package from the early months of the pandemic, was used for tribal clean water projects.

Tulley-Cordova said the recent surge in federal money was useful, but she cautions that clean water access in the Navajo Nation can only be assured through more consistent funding in the future.

“Almost 40% of people don’t have running water,” she said. “It’s not going to take one infrastructure bill to address that. And it’s not going to be able to be done by the end of 2024. These are challenges that are wicked.”

Permanently designated funds would be especially useful in maintaining water infrastructure in the long term. 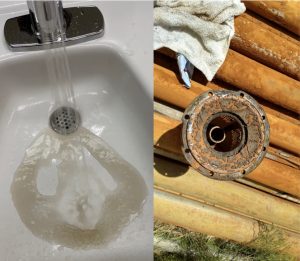 Water flows dark with contaminants in a sink at Tohajilee’s school, and a pipe from the community’s plumbing system shows signs of rust and corrosion after two years of use. An engineer who worked on the pipes says they “looked decades old.” (Photo courtesy of Souder, Miller & Associates)

U.S. Rep. Melanie Stansbury, D-N.M., whose district includes To’hajiilee and Albuquerque, has been a high-profile ally of the town’s quest for new water infrastructure. She also emphasized the need for dedicated federal funding and said access to clean water was “at its core, a human rights issue.”

“It is a moral responsibility as a nation, as a people and as communities to address this issue and to ensure that every person everywhere has access to clean drinking water,” Stansbury said.

She said it will take partnerships between tribes, the federal government, state and local authorities, the private sector and philanthropists to make serious strides in the face of historically neglected tribal water infrastructure.

“I think that To’hajiilee is really a case study of a much larger issue that is systemic across the U.S.,” Stansbury said. “Which is underinvestment in tribal water infrastructure, a need for the federal government to really step up and make good on its federal trust and treaty responsibilities and a need to deploy every possible resource and partnership to make sure that we’re bringing safe and clean drinking water to these communities.”

“You begin to think about who was at the table and who wasn’t at the table,” she said. “And when you look at the historical photos of the signing of different compacts, what is visible there is that there was no presence of Indigenous peoples participating, although they’ve occupied the lands and use the water resources.”

After centuries of exclusion from discussions surrounding water use and management, Tulley-Cordova said, challenges brought on by climate change are liable to usher in centuries more.

“When you look at the impacts that Indigenous communities experience,” she said. “They’re heightened impacts compared to other communities. By providing sustainability through water infrastructure, we’re also providing adaptability to climate change as well.”