Relics of the No. 4 British Flight Training School are preserved at Falcon Field. 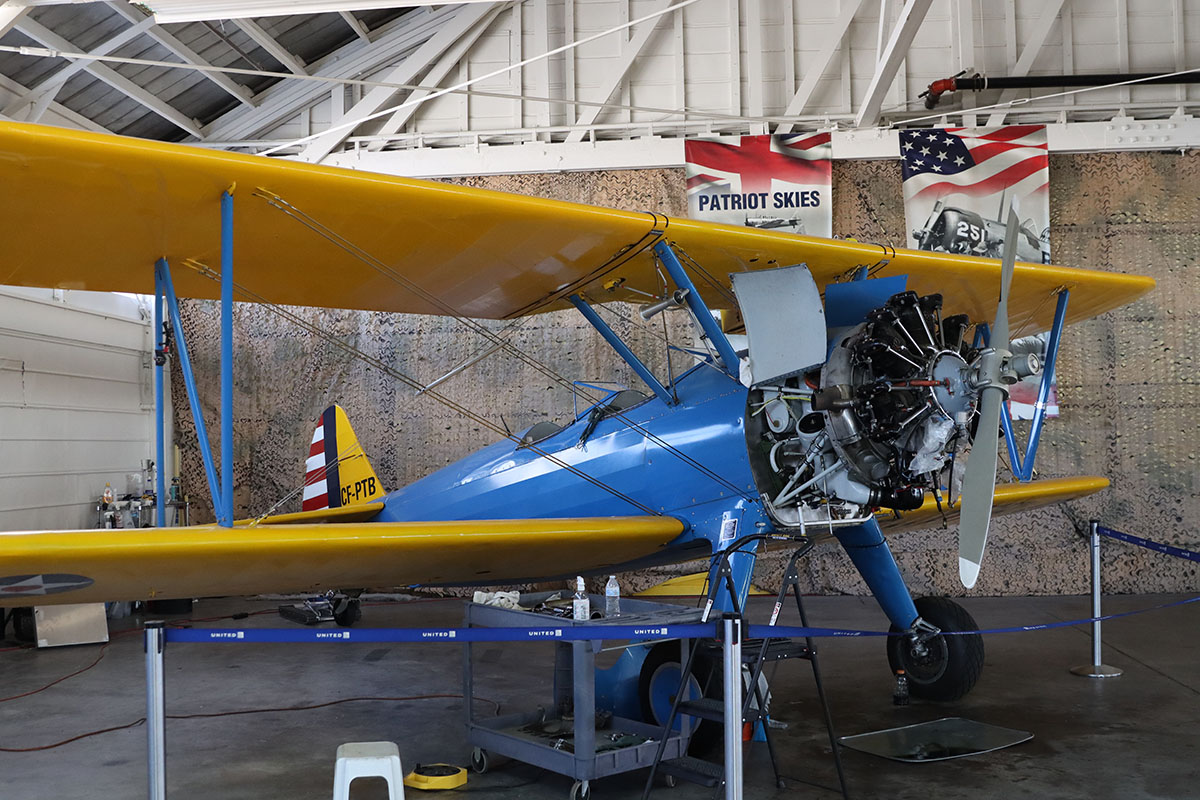 Stearman biplanes were among the primary aircraft used to train the estimated 2,500 British pilots who went through the No. 4 BFTS at Falcon Field, which opened in September 1941 amid mostly empty farmland. (Photo by Sierra Alvarez/Cronkite News)

MESA – It was summer, 1940. German armies had smashed through central Europe, subjugating Poland, Norway, Belgium and France. Emboldened by the success of his blitzkrieg, Adolf Hitler turned his guns on England, launching an unprecedented aerial assault before the planned invasion of the British Isles.

The Battle for Britain is remembered for what would have been lost had the Nazis prevailed that summer and fall. With Britain – one of the world’s great powers – out of the war, the Allies would have collapsed, and Europe would have fallen to Hitler.

The British government, motivated by German air superiority and a lack of fuel and planes, scrambled to begin a program with one goal: Turn untrained British soldiers into capable military pilots.

Delivered by train after a long trip to Canada, these men, some as young as 18, undertook an exciting journey into the heart of the American Southwest. Their mission: to learn to fly at a newly established British Flight Training School in Arizona, and to return, for king and country, to deliver Europe from the hands of the Nazis. 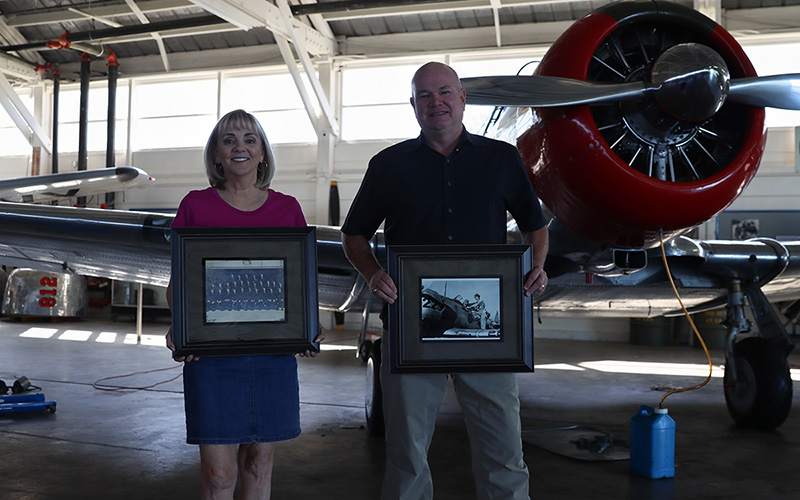 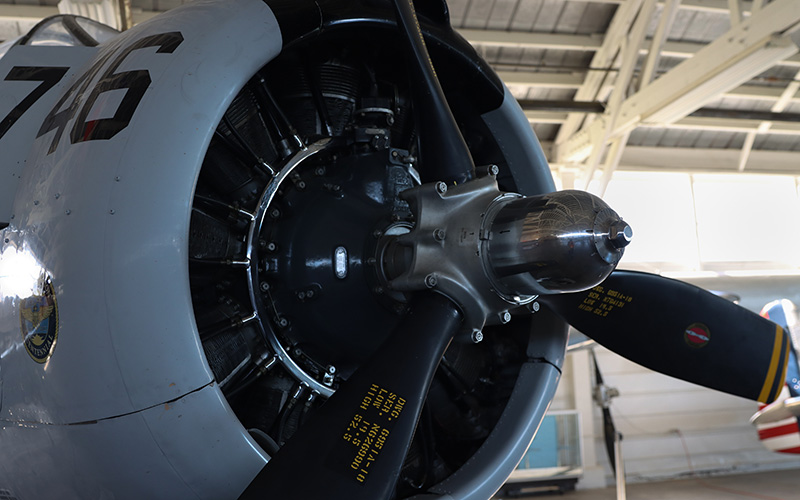 The Wings of Flight Foundation has worked to preserve No. 4 BFTS hangar at Falcon Field, which houses several vintage planes. (Photos by Sierra Alvarez/Cronkite News)

Today, the No. 4 BFTS hangar is nestled in the heart of east Mesa’s bountiful citrus groves. The metallic exterior of the hangar, neighbored by large digital murals depicting the former pilots and technicians who worked there, opens up to reveal a spacious interior brimming with impeccably kept vintage aircraft, equipment and movie posters.

The history of the airfield is a story in war preparation. The United States, uneasy about growing facism in Europe and Asia, began a civilian pilot training program in October 1938. In Arizona, six airfields were constructed to train pilots to take on the German Luftwaffe. Falcon Field was built through the combined efforts of investors and concerned Hollywood actors hoping to make a difference in the war engulfing Europe. After an agreement between American and British governments, the fourth British flight school stateside, known as the No. 4 BFTS, opened in September 1941 amid mostly empty farmland.

CORRECTION: A previous version of a photo caption with this story misstated the name under consideration for the Mesa airport before it earned the Falcon Field moniker. The airport was originally to be named Thunderbird 3. The caption has been corrected, but clients who used earlier versions are asked to run the correction found here.

Arizona was a shock to the young Royal Air Force pilots, who were used to gloomy weather, constant air assault and national food rationing. War had delivered them to a land of endless sunshine, striking scenery, kind locals and fresh citrus.

“Of all their memories, they talk about the food,” said Jocelyn Condon, board of advisers member and coordinator for the Wings of Flight Foundation, which is dedicated to preserving the history of No. 4 BFTS. “Fresh oranges and bananas and palm trees; they were just in heaven here.”

Condon said more than 200 Arizona families provided regular support to the pilots, driving out to the field on the weekends to transport the Brits to dinners and parties in Mesa.

Like war itself, flight training is dangerous; some pilots didn’t make it. According to the BBC, more than 55,000 aircrew died in raids over Europe from 1939 to 1945 – meaning pilots experienced the highest loss rate of any major branch of the British armed forces.

“These guys were extremely brave, and they were all volunteers,” said John D. Barber, Arizona resident and son of BFTS pilot Dennis R. Barber. “Because they knew that they were going into an occupation in the military that was more likely to result in their death than any other occupation.”

An estimated 2,500 Britons trained at Falcon Field before the No. 4 BFTS closed.
The 23 RAF pilots who died were buried at Mesa Cemetery, and the British government continues to maintain an immaculate plot of land dedicated to the men in the heart of downtown Mesa. 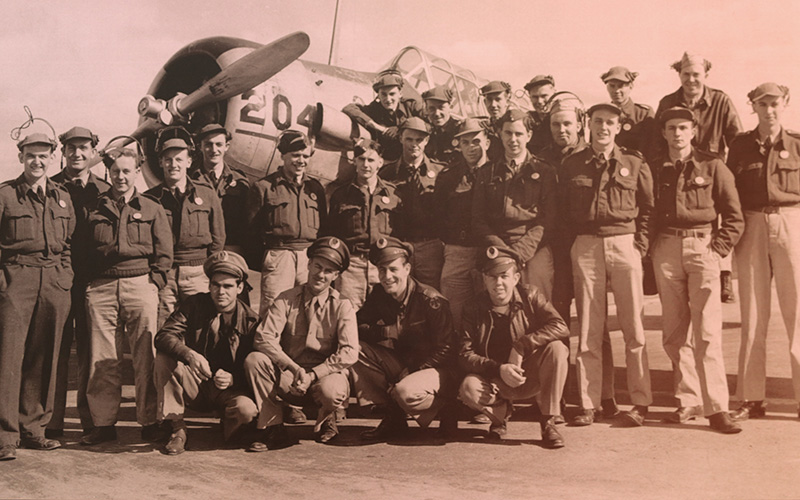 Instructors and cadets from Course 7 at Falcon Field pose for a photo in December 1943. 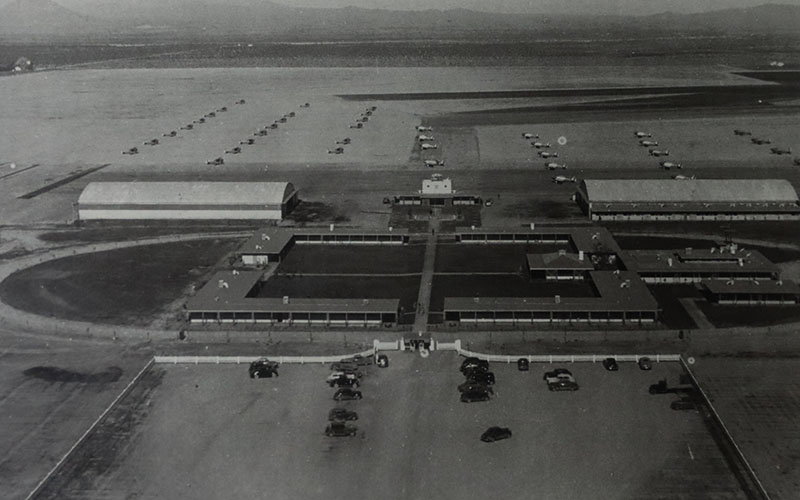 Falcon Field in east Mesa originally was to be named Thunderbird 3. But British officials weren’t familiar with the mythical thunderbird of the American Southwest, choosing instead the falcon, which long has been a symbol of British power. (Photos courtesy of Falcon Field)

Left: Instructors and cadets from Course 7 at Falcon Field pose for a photo in December 1943. Right: Falcon Field in east Mesa originally was to be named Thunderbird 3. But British officials weren’t familiar with the mythical thunderbird of the American Southwest, choosing instead the falcon, which long has been a symbol of British power. (Photos courtesy of Falcon Field)

Understanding the experiences of these young pilots is no easy task. The Wings of Flight Foundation has identified 20 who are alive today. Those who have died, or who can no longer tell their stories, live on in the tales of their descendents and at historic places such as No. 4 BFTS.

But their impact is well-known: British pilots who trained in America helped replace the 544 pilots – one-sixth of the air force at the time, according to the Imperial War Museum – who were lost fighting the Luftwaffe in 1940.

Despite such heavy military and civilian losses, the planned invasion of Britain never came. In December, Germany invaded the Soviet Union, opening a costly second front. A year later, America joined Britain, France and the other Allied forces, and after D-day in June 1944, German forces were in steady retreat before surrendering in May 1945. 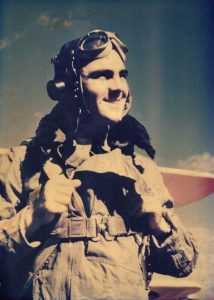 Ken Beeby, who trained at Falcon Field, was first assigned to a bomber squadron. Shortly before the end of the war, however, he was reassigned to a Spitfire squadron – which effectively kept him out of combat. (Photo courtesy of Anne Beeby)

The greater meaning behind the pilots’ sacrifices has not been lost on their descendents, and the personal impact family members have felt from their sacrifices have laid the foundation for much of their own lives.

“Freedom isn’t free. These young men risked their lives for king and country back then – just like those of us that join the military today,” Barber said. “I spent 38 years in the military, and I would not have spent so much time and devoted my life to government service if it wasn’t for the fact of my dad and his buddies and their sacrifices.”

“It means everything,” she said. “I mean, this is the greatest generation, and people need to know that. So many of them gave their lives, and we are losing them now. They are getting to the end of their lives, and we need to remember what they gave for us – the freedom they were able to obtain for us.”

Ken Beeby resigned his military commission after the war and was back in Arizona by January 1947.

“He loved it here. He loved the weather. It never got too hot for him,” Anne Beeby said.

Dennis Barber, a long-time Ford Motor Co. employee, secured a transfer to a manufacturing plant in California and, shortly after, in Arizona. His infant daughter’s health required a warm and dry climate, and the former pilot knew of only one place that could accommodate.

“Our fathers chose to be Americans,” Barber said. “They weren’t born Americans. They chose to be Americans because of all the freedoms we have in this country that we need to hold so dearly, and unless people are willing to serve, we are one generation away from losing our freedoms.” 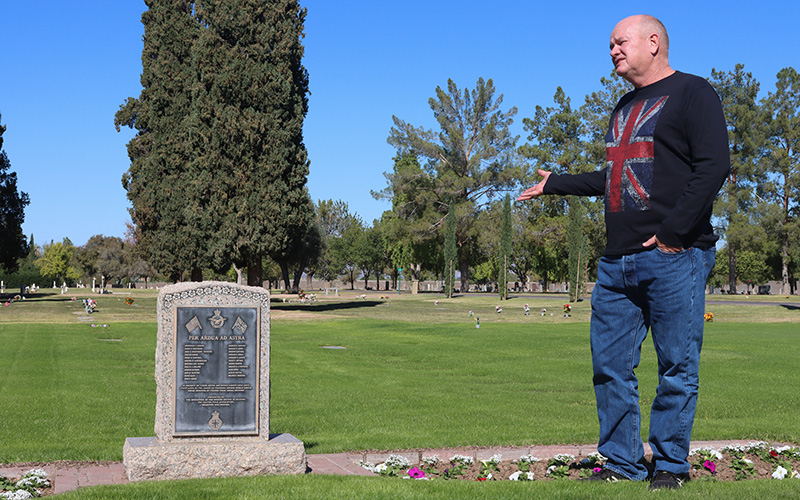 John D. Barber visits a memorial to the 23 RAF pilots who were buried at Mesa Cemetery. The British government still maintains an immaculate plot of land dedicated to the men in downtown Mesa. (Photo by Sierra Alvarez/Cronkite News)

The Falcon Field hangar and its history could not have been as well-preserved without the work of the Wings of Flight Foundation.

“Part of our mission,” Condon said, “is that we promote the history and keep it alive to pass on to the younger generation.”

The group started as an attempt to preserve the unofficial anniversary gatherings of the surviving pilots who, reminiscent of their time in Arizona, returned yearly until old age prevented them. Condon said the effort to preserve the history wouldn’t have been possible without the help of Jen Duff, who has worked to preserve Mesa’s historical sites during her time on the City Council and has a personal connection to Falcon Field.

“The rich history at Falcon Field also became a rich part of our family history, and it was an honor to donate many items to commemorate the 80th anniversary celebration for both the airport and BFTS 4,” Duff said in a statement to Cronkite News. “My great uncle, Charles L. Turner, was a RAF navigation instructor at Falcon Field. He married Molly Turner, also from England, when he was stationed in the U.S. to train British pilots. My mother and other family members came here from England after World War II to join the Turners to make Mesa their home.”

According to Condon, most of the volunteers who maintain the vintage hangar are pilots for American Airlines who are dedicated to preserving the history of these RAF pilots through fundraisers and individual donations.

One such fundraiser is set for Saturday, Nov. 13, as part of a four-day 80th anniversary event for the hangar. Dubbed “A celebration for all involved,” the fundraiser will host airshows and games, with invitees including surviving RAF pilots and descendants.