Salt-caked soil bakes beneath the sun in the Colorado River delta in northern Mexico. (Photo by Luke Runyon/KUNC)

A question has bothered climatologist Park Williams over the decade he has studied drought in the Southwest. Like other climate scientists, he knew from research papers and worldwide storm patterns that a warming atmosphere is thirstier and sops up more moisture from oceans and the land.

“But in the Southwest, we’ve seen the exact opposite happening,” said Williams, an associate professor of geography at UCLA. “For the last 50 or so years, we’ve actually seen the amount of water vapor molecules in the atmosphere decline” while temperatures have climbed about twice as fast as the global average.

A new paper from UCLA researcher Karen McKinnon largely solved that puzzle by showing the hottest days in the summer months are getting dramatically drier as a result of the Southwestern spring heating up and leaving less moisture behind to cool the summer through evaporation.

The study, published in the journal Nature Climate Change, shows a surprising new way in which heat and humidity are interrelated, and it comes at the beginning of a summer that already is sweltering and plagued by wildfire and long-term drought. For some, the paper also raises concerns about future warming in Southwestern states.

“When you look at those hottest days, we’re starting to see pretty large decreases in humidity,” said McKinnon, who works in UCLA’s department of statistics and Institute of the Environment and Sustainability.

Her team analyzed spring and summer data from 28 weather stations at airports in Southern California, Arizona, Colorado, Nevada, New Mexico and Utah. They zeroed in on “specific humidity,” a measure of the molecules of moisture in the atmosphere that ignores such factors as temperature that are counted in the more commonly referenced “relative humidity.”

'You feel like you can't get a break': The Colorado River struggles to water the West after two decades of drought

“On these hot dry days, the source of the moisture in the air is basically coming from the soils from the land surface – and we’re seeing declines in near surface soil moisture over the summer over these past couple of decades – and that’s leading pretty clearly to these decreases in humidity,” McKinnon said. “So we’re having lower humidity days as the soil moisture gets drier.”

The researchers found that specific humidity had decreased across the Southwest by an average of 20%. And in California and Nevada, the decreases were about one-third of the mean value.

The link between heat and dryness in the region has been the subject of a growing body of research that has attracted lots of attention in recent years. Last year’s record-setting wildfires in two states, the historically low water in Lake Mead, Utah’s worst drought on record and Arizona’s deadliest year for heat-related fatalities all are reminders that heat and dryness go hand-in-hand in the Southwest, and have terrifying consequences.

In the paper, McKinnon’s team pointed out that these scorching, parched days desiccate vegetation, increase wildfire probability and set the stage for fires to spread more quickly.

The pattern identified in the study is a positive feedback loop with negative implications. Increasing heat in the spring dries the soil, which, in turn, raises summer temperatures due to the lack of soil moisture, which helps cool the land as it evaporates.

The weekly U.S. Drought Monitor classifies more than half of the West as in “extreme” or “exceptional” drought, with 77% to 98% of the land in Nevada, California, Arizona and Utah in the most severe drought categories. Meanwhile, observations show drought conditions have dominated the region over the past two decades, pushing the Southwest into what’s called a megadrought.

Simon (Shih-Yu) Wang, a professor of climate dynamics at Utah State University, called the McKinnon team’s new statistical analysis “a rigorous approach” that reaffirms the significance of the soil moisture and temperature link that researchers have been studying in earnest for a decade.

“When we don’t have water in the soil, we’re going to get a lot hotter a lot faster,“ he said of the hot-dry pattern that’s become typical with climate change in the Southwest. “Basically, it’s what you expect in a drought situation in semi-arid regions.” 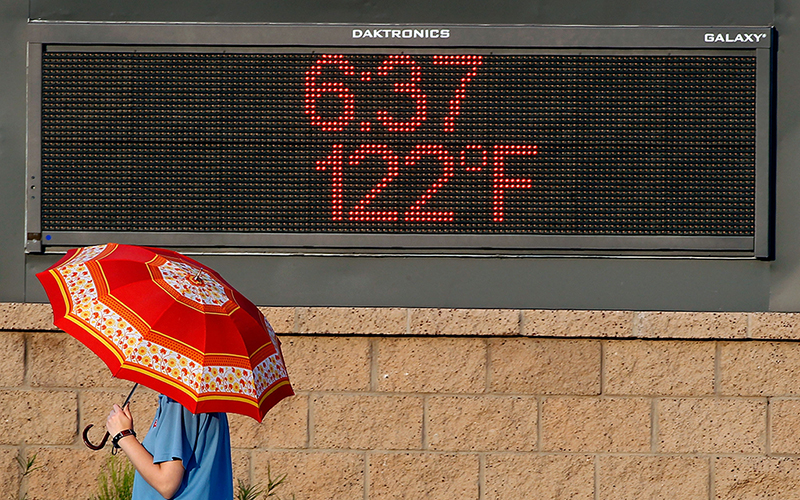 Hotter springs in the West are drying out the land, which makes for hotter summers, which make for drier land, cycles that experts say “could feed on each other.” (Photo by Ralph Freso/Getty Images)

“We can wait for natural variability to come and then give some water back to the land,” he said. “But over time, overall, the trend is that this (hot-dry) effect will increase.”

Imtiaz Rangwala, a research scientist with the Western Water Assessment at the University of Colorado, called the paper a clear sign of a hotter, drier future for the Southwest.

This is bad news, in particular, for the two largest reservoirs in the United States: Lake Mead on the Nevada-Arizona line and Lake Powell in southern Utah. Both rely on the Colorado River, the lifeblood of the Southwest, to store and deliver water to more than 40 million people in the region. And both can expect more evaporation because of the higher temperatures. The reservoirs already are low enough that downstream users are anticipating new water cutbacks.

That’s because fire is strongly influenced by the difference between the amount of moisture the atmosphere can potentially hold and how much it actually has.

The difference between the two is known as the “vapor pressure deficit.” And the bigger the deficit, the thirstier the atmosphere and the more erratic wildfire becomes. That, plus the dryness of vegetation, means “the fire season will grow at both ends,” he said.

The McKinnon paper noted that the future of this summertime trend remains unclear, even though it’s something the team considered in its analysis. Uncertainty surrounding precipitation trends in climate models for the Southwest – some models show precipitation increasing – makes it hard to know how much vapor pressure deficit the region will face.

The Southwest ought to prepare “for a range of possible outcomes,” McKinnon said. Still, with the projected rise in temperatures and the new information about the hot-dry dynamic leaves little room for optimism about a moister future in the Southwest.

“We’re certainly jumping into another summer that looks like it will be pretty tough in the western U.S.,” said McKinnon, whose paper was published at the height of last month’s deadly heat wave.

Williams, who had been looking into the possibility that wind patterns were driving the decline in Southwestern humidity, also has his eye on the vapor pressure deficit, which he calls “the sponginess of the atmosphere.”

“The atmosphere is very thirsty for water now, and that means that it is sucking harder than ever on the leaves of forests or on the surface of lakes Mead and Powell,” he said. “The evaporative demand of the atmosphere is skyrocketing right now.”

McKinnon’s paper has him wondering now about how much the region’s current heat wave is being influenced by this heat-dryness dynamic and how many degrees the vapor pressure deficit has contributed.

But UCLA’s Williams, part of a research team behind a paper last year showing that the manmade share of climate change can be blamed for about half of the historic Southwest drought, also thinks about how the extra warmth from the heat waves might promote enough convection to result in precipitation. He is also considering whether the hot, dry trend might lead to something as dramatic as a “sliding out of control, a tipping point.”

“The ocean is giving the atmosphere more water molecules,” he said, “so for this region to have less – something profound is happening at the Earth’s surface.”

This story originally was published by Inside Climate News, an independent, nonprofit, nonpartisan news organization that covers energy, climate and the environment.