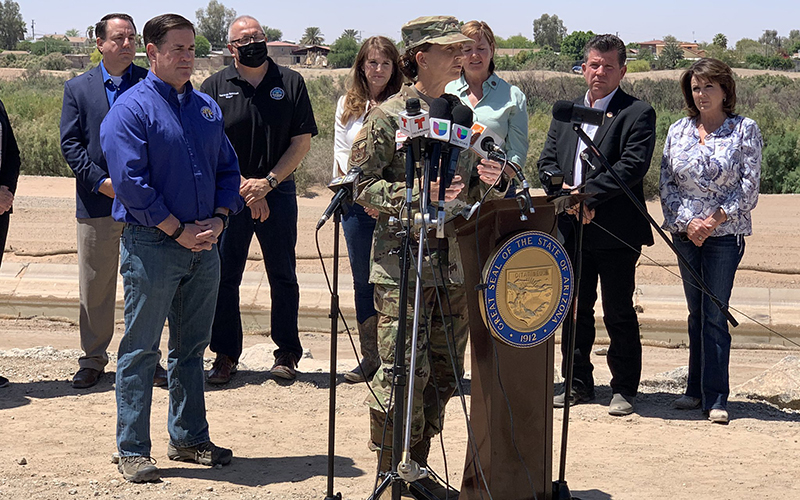 The Arizona Legislature on Monday passed a resolution to ask for more federal assistance combating the recent increase in illegal border crossings from Mexico.

The bipartisan resolution did not come without intense partisan debate.

“The mantra, ‘Build the Wall,’ it has nothing to do with security or safety. It has no concern for wasting a bunch of money. So I’m concluding that the motivation of all these lathered up voters has to be built on nativism and racism,” said Sen. Juan Mendez, a Democrat who represents Tempe.

Sen. Sine Kerr, who sponsored the resolution, is a Republican from Buckeye.

“My mother was born in Naco, Sonora, Mexico. She became a naturalized citizen in 1969 and was so deeply proud of that,” Kerr said.

Both of Arizona’s U.S. senators, Kyrsten Sinema and Mark Kelly, have released statements in recent weeks demanding more immediate action from the Biden administration. Sinema noted that border crossings are at their highest rate in 20 years.

More than 569,000 migrants were apprehended in the first six months of this fiscal year, and more than 49,000 of them were unaccompanied minors, who have overwhelmed federal facilities designed to house and process them.

Ducey said he would allocate $25 million in initial funding for the deployment, in which guard members were to help with detention center medical operations, install and maintain border cameras and analyze satellite imagery for trends in smuggling corridors.

The State Emergency Council in April voted to allocate up to $2.5 million from the Governor’s Emergency Fund for the National Guard and another $200,000 to support search and rescue efforts.

At the time, the Governor’s Office released a statement from Ducey: “We’re not going to wait for the federal government to act, so I’m grateful to the State Emergency Council for approving the nearly $2.8 million to support this mission until we receive funding from the Arizona Legislature.”

This article contains information from Cronkite News reporters. The Fronteras Desk is a unique KJZZ project that covers a wide expanse of an under-covered news desert that stretches from northern Arizona deep into northwestern Mexico.