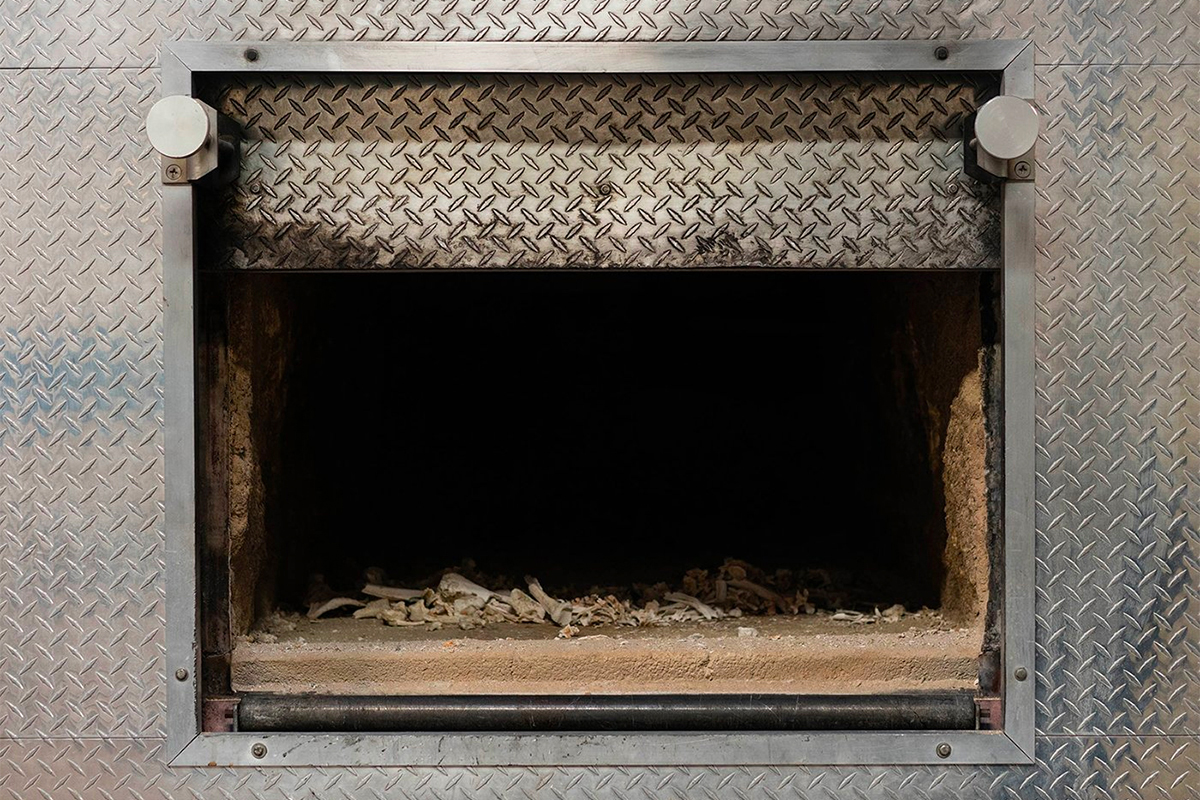 Cremated remains lie in the incineration chamber at the Paradise Memorial Crematory in Scottsdale, one of the state’s largest. Partly fueled by the pandemic, the U.S. cremation rate reached 56% in 2020; it was 67% in Arizona. (Photo by Kevin Pirehpour/Cronkite News)

PHOENIX – Rows of cardboard boxes containing corpses line the walls of refrigerated storage containers, waiting for charred human remains to be cleared from the incineration chamber to make room for the next body.

The cremations continue through the night in a scene that has unfolded across America as COVID-19 deaths have risen to more than 540,000 over the past year.

In Arizona, where 16,842 have died in the pandemic, the smoke and the hum of crematoriums working overtime have left some neighbors desperate for relief from the odor and pollution.

Arizonans opt for cremation more frequently than the national average, with 67% choosing that option in 2020, according to a July 2020 report from the National Funeral Directors Association.

The national cremation rate reached 56% last year, an increase from 47.9% in 2015, the last reported year. The rise was fueled by the COVID-19 death toll and pandemic restrictions, the low cost of cremation services and the flexible timing for funeral arrangements with cremated ashes.

Some condo owners in east Scottsdale have taken notice of unexpected wafts of smoke and a lingering odor coming from the nearby Paradise Memorial Crematory near 93rd Street and Shea Boulevard.

“The smell was so unbearable that everybody needs to run into their houses,” said retiree Marlene Dove, who moved there in September. “If you have guests, they have to come in or they put things over their heads and their faces to keep the smell out.”

Her complaint is among 20 filed in Maricopa County regarding crematorium smoke from Feb. 27, 2020, to March 2, 2021. Records from Maricopa County Air Quality show the complaints include black or brown smoke and a “horrible odor.” Some residents claimed the emissions gave them sore throats.

Last April, Maricopa County Air Quality lifted a regulation prohibiting crematoriums from operating past sunset, giving them more time to cremate the increased number of COVID-19 deaths. That lift, which was extended in June and again in December, is in effect through May 31.

According to Arizona Department of Health Services data, the state saw surges in COVID-19 related deaths during the summer and winter, with a single-day high of 173 deaths reported Jan. 18.

The occasional smoke coming from crematorium chimneys is an inevitable byproduct of the cremation process, said James Ahearne, COO of Messinger Mortuaries, the company that oversees Paradise Memorial Crematory.

“Every crematory will smoke, if they tell you they don’t, they’re lying,” he said. “It’s just the way it is.”

Last year, Paradise Memorial Crematory – one of the largest in the state – cremated 6,868 bodies, an increase from 6,071 in 2019, before the pandemic began. From the start of 2021, Paradise Memorial already has cremated 1,931 bodies, Ahearne said, with much of those coming in January after the holidays. If the trend continues, 2021 could outpace last year.

Ahearne said a walk-in freezer used to store bodies at Paradise Memorial had 60 to 70 bodies backlogged in January, waiting to be cremated. 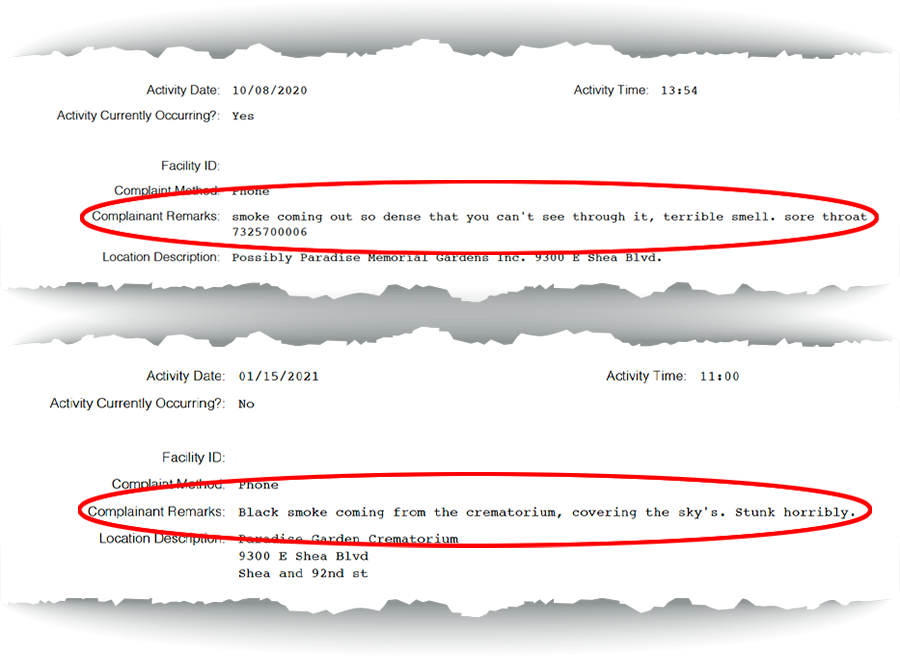 By 2030, the cremation rate in Arizona is expected to reach nearly 80%, the National Funeral Directors Association says.

Nationally, the median cost to bury an adult in a traditional ceremony is $7,640, according to the association. In Arizona, it’s $6,906.

Cremations cost an average of $6,645 nationally, with a cremation casket and urn, and about $5,812 in Arizona, according to the association.

There’s also the convenience of cremating now and organizing a service later at a particular destination, said Barbara Kemmis, executive director of the Cremation Association of North America.

With travel restrictions and social distancing guidelines in place for many states throughout the pandemic, cremation extends the time frame for grieving families to make decisions for the deceased.

As COVID-19 cremations surged across the country, so did neighbor’s complaints about smoke and sore throats.

“That’s completely a danger when they’re overwhelmed and trying to do as many cases a day to return those cremated remains to loved ones,” Kemmis said.

Issues with smoke coming from Paradise Memorial Crematory are not new but have seemingly worsened throughout the pandemic, said David Dubner, 79, who has filed multiple complaints with Maricopa County and is Dove’s neighbor.

“There’s not just been puffs but pouring smoke, sometimes for up to five, six minutes. (It) covers the whole area,” Dubner said.

Three years ago, Paradise Memorial Crematory expanded the number of cremation ovens on their premises from three to six, Ahearne said, and plans to add another in the next five or six months.

“What we’re trying to do here is cremate as many as we have to for our clients and not smoke at all,” Ahearne said. “And unfortunately, sometimes we do.”

Throughout the pandemic, said Gregg Busch, funeral service manager at Neptune Society in Tempe, the increased number of COVID-related deaths and cremations has forced staff members to work into the night and put employees at risk of COVID-19 infection.

“Organizations like our own – which focus entirely on cremation – have been overwhelmed by the pandemic,” said Busch, who has more than 40 years of experience in the funeral industry. “Not only just the number of deaths that have occurred but also in the fact that our staff and our employees have many times become infected, which puts us even farther behind with low staffing.”

This wasn’t the first time crematoriums extended hours of operation to keep up with an increased number of deaths, he said, but “nothing compared to this.” 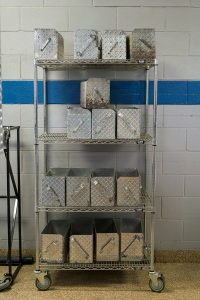 The ashes and bones of a cremated person are brushed into rectangle metal boxes before being placed in an urn for grieving loved ones. (Photo by Kevin Pirehpour/Cronkite News)

“It was certainly a difficult time during the H1N1 pandemic,” Busch said. “The COVID-19 pandemic is much more.”

An estimated 151,700 to 575,400 people worldwide died from the H1N1 “swine flu” pandemic in 2009, its first year of circulation, according to the Centers for Disease Control and Prevention.

In about the same time, more than 2.5 million people worldwide have died from COVID-19, according to the Johns Hopkins University of Medicine.

Dove tries to escape the emissions from Paradise Memorial Crematory by keeping her windows and doors shut – or leaving her complex. She has stopped inviting people to her home, and some of her neighbors refrain from using their patios, she said, because they never know when the “smell is going to hit.”

“We’re not unreasonable people,” Dove said. “We just need a break from this once in a while. I mean, it’s just continuously going.”

Crematorium emissions depend on the materials burned in the chamber, according to a 2020 Canadian study, such as natural gas used to fuel incineration chambers and particulate matter and heavy metals, such as trace amounts of mercury from dental fillings.

The CDC says obesity increases likelihood for severe illness and death from COVID-19, and bodies weighing more than 200 pounds generate more smoke than those weighing less, Ahearne said. Paradise Memorial Crematory processes heavier bodies in the morning and the lighter ones in the afternoon and evening to limit visible pollution.

“The size of people that are dying of COVID are larger people,” he said. “Weight has a lot to do with the ability to cremate somebody, and when you can cremate them. When you have a lot of heavier people, you do those first thing in the morning.”

No matter the materials burned, or the weight of the deceased, crematoriums are allowed to release smoke visible up to 20% opacity in the air, according to Maricopa County Air Quality regulations.

The hazardous visible aerosol particles, referred to as particulate matter, that crematoriums emit is of “minimal” concern compared with the pollution caused by vehicle traffic or backyard bonfires, said Philip McNeely, director of the air quality department. 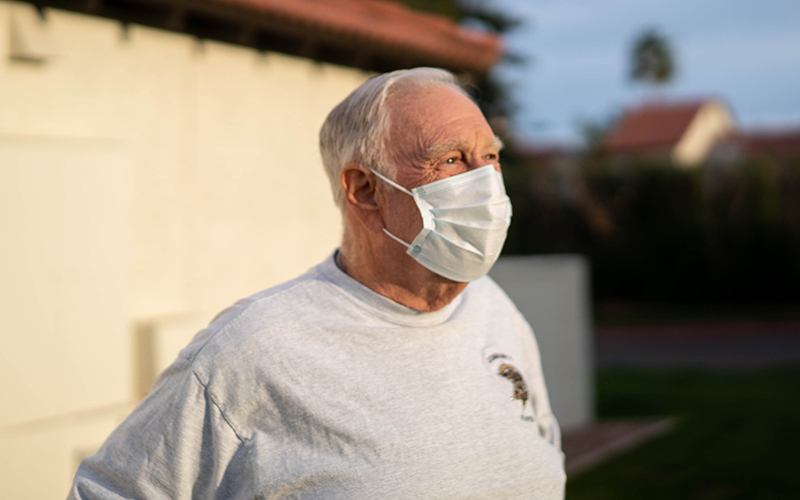 David Dubner and his neighbors have filed multiple complaints with Maricopa County Air Quality Department regarding smoke and odor coming from nearby Paradise Memorial Crematory. 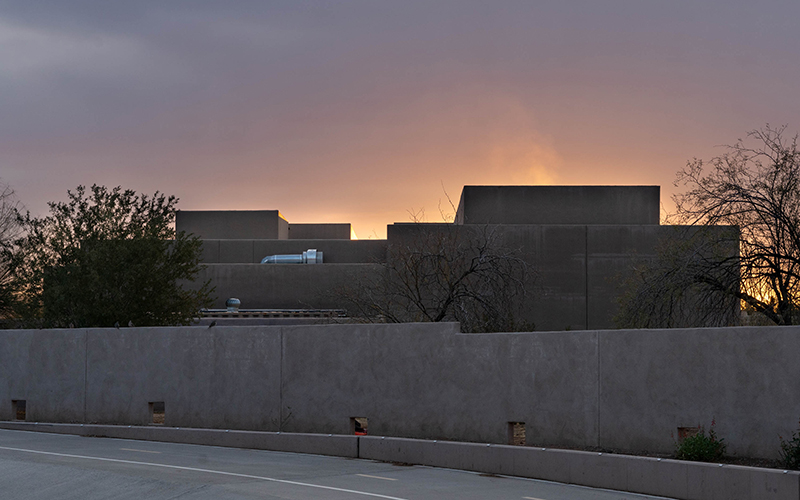 Pale smoke rises from the Paradise Memorial Crematory in Scottsdale. Maricopa County in April lifted a regulation preventing crematoriums from operating past sunset, helping them deal with the increased number of COVID-19 deaths. (Photos by Kevin Pirehpour/Cronkite News)

Left: David Dubner and his neighbors have filed multiple complaints with Maricopa County Air Quality Department regarding smoke and odor coming from nearby Paradise Memorial Crematory. Right: Pale smoke rises from the Paradise Memorial Crematory in Scottsdale. Maricopa County in April lifted a regulation preventing crematoriums from operating past sunset, helping them deal with the increased number of COVID-19 deaths. (Photos by Kevin Pirehpour/Cronkite News)

The county sets crematorium emission standards and includes regulations to test for machine efficiency, times of operation and allows for 2,500 tons, or 5 million pounds, of total material to be burned within a 12-month period. All complaints are individually investigated by the department, McNeely said.

Although rare, accidents and machine malfunctions do happen, Ahearne said.

A power outage March 2 interrupted an active cremation at Paradise Memorial and sent black smoke billowing from the chimney for 5 to 10 minutes while the system shut down, Ahearne said.

“That was the worst I’ve seen,” he said. “I’ve been doing this for 50 years and it was just terrible. But once it starts, there’s nothing we can do.”

System malfunctions are not unique to Paradise Memorial Crematory and similar situations have been reported at other crematoriums in the Phoenix area.

One funeral director in Sun City reported a thermocouple, a sensor used to measure temperature, malfunction and told county investigators that “black smoke was visible for about 10 minutes” during a cremation, according to county records. The thermocouple was replaced and the investigation has been closed.

Despite unexpected malfunctions and the increased of cremations, the accompanying emissions still have significantly less of an environmental impact on total air quality than unregulated fires that burn at lower temperatures around 600-900 degrees, said Leif Abrell, an associate research scientist with the Arizona Laboratory for Emerging Contaminants at the University of Arizona.

A box containing the body of a 173 pound man is sent to the incineration chamber at the Paradise Memorial Crematory on March 15. (Video by Kevin Pirehpour/Cronkite News)

Burning trash or wood used in a bonfire increases “the potential for other noncarbon dioxide pollutants” to be released into the atmosphere compared to county regulated, high-temperature burning at crematoriums, Abrell said.

“That’s why one person burning trash in their backyard at a low temperature can kind of obliterate a whole bunch of work that’s done by other people (operating) at high temperatures according to regulation,” he said.

Although vehicle traffic and backyard fires of of greater concern for county regulators, Dove and Dubner are waiting for relief from both the pandemic and the smoke wafting from the crematorium chimney.

“You can’t be inside during COVID,” Dove said, “because you’re not supposed to be in a closed area with people, and you can’t sit outside because sooner or later the smell is going to come up.”

Ahearne said the number of cremations is incrementally decreasing, and lasting relief may be on the horizon as vaccines reach more Arizonans and fewer people test positive for COVID-19.

“Hopefully this pandemic thing will calm down and get back to kind of normal,” he said.