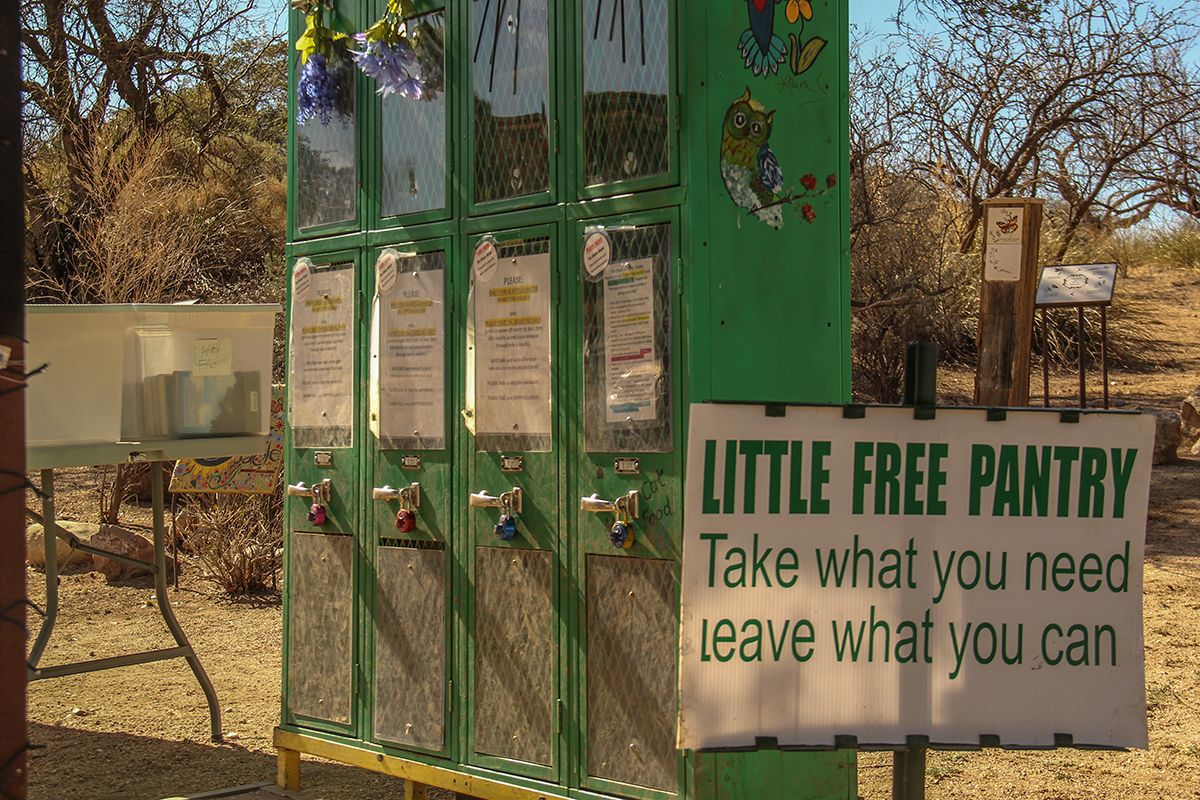 Oracle residents have turned eight old school lockers into little pantries that serve one big purpose: fighting food insecurity. Before COVID-19, food insecurity in the U.S. had fallen to its lowest levels in 20 years, but the pandemic likely reversed those gains. (Photo by Travis Robertson/Cronkite News)

Standing side by side in the midday sun, two women sort through a box filled with peanut butter, bread, rice and all kinds of canned goods.

“Oh, yay!” Laura Stiltner replies as she stacks the items into eight old school lockers that sit outside the Oracle Community Center. “Take what you need. Leave what you can,” an adjacent sign reads.

The metal lockers have been converted into little pantries that serve one big purpose: to fight food insecurity in the unincorporated community of about 4,000 north of Tucson.

“We started seeing a lot of families that were out of work, the kids being home all the time,” said Stiltner, who with Schwenke serves on the community center’s board. “It was kind of motivation to say: We’ve got to do something to help people that just need food and basics right now.

“It makes you feel good inside to know you’re helping people.”

Oracle launched the project in September as a part of the Little Free Pantry movement, one of several efforts worldwide in which people donate food and goods and house them in a neighborhood space to be used by anyone who needs help. 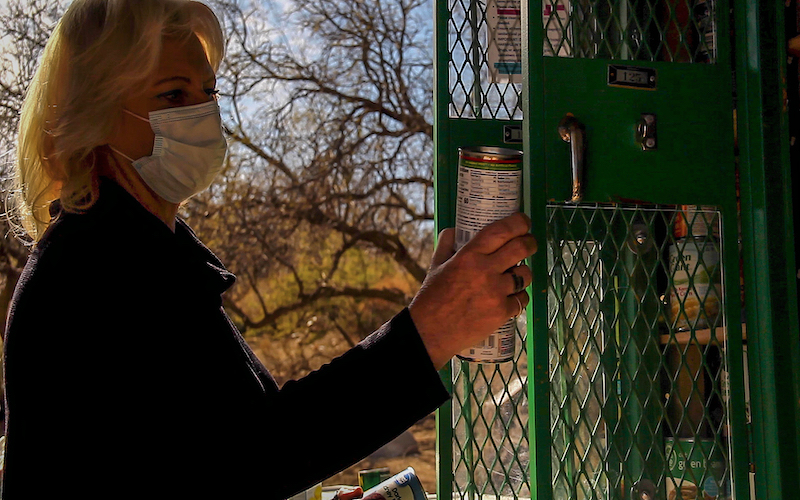 Laura Stiltner, vice president of the Oracle Community Center board of directors, restocks the community pantry. “It makes you feel good inside to know you’re helping people,” she says. 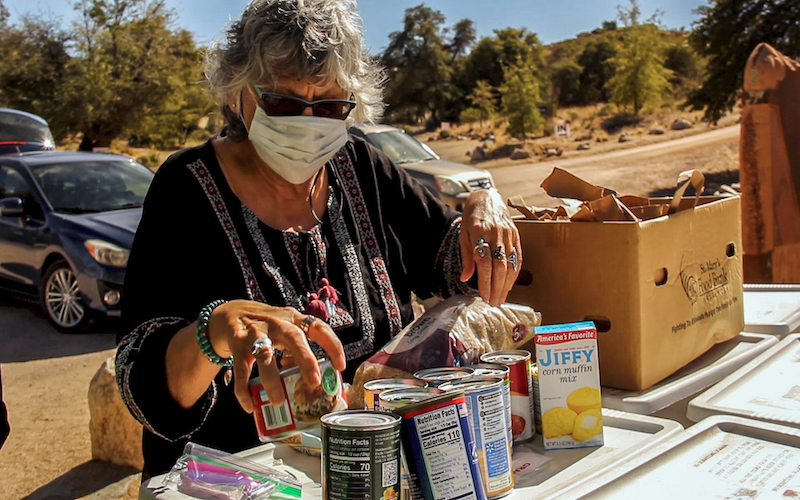 Tina Acosta, 56, who works for the Oracle Fire District, first heard about the movement on the radio, before COVID-19. Once she saw the impact of the pandemic on her neighbors, she shared the idea with others, including Stiltner, who “took the ball and ran with it.”

The community center provided a space and has done most of the work filling and maintaining the pantry.

“We have homeless just like every community, or people who may have a roof over their heads but they still need help,” Acosta said. “I just hope that it catches on, because it’s such a great resource. It’s not any one particular organization or affiliation. It’s just people trying to help people.”

Before the pandemic was declared last March, food insecurity across the country had fallen to its lowest levels in 20 years, according to Feeding America, the largest hunger-relief organization in the United States. But COVID-19 likely reversed those gains. 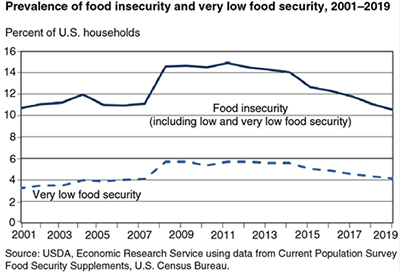 The organization projects that more than 50 million people – 17 million of them children – experienced food insecurity in 2020. In 2019, the numbers were 35 million and 11 million.

Oracle is in Pinal County, which is projected to see a 27% spike in the number of food-insecure residents from 2018 to 2020, an increase of almost 15,000 people, according to Feeding America. Across Arizona, 260,000 people were considered food insecure last year, an increase of 28% from 2018.

Community members had a big part in building the Oracle Pantry. The Fire District donated the lockers, which had been sitting in storage, and local artists decorated them. Volunteer handymen built a roof to protect the lockers during hot summers. And once javelina started figuring out how to get food from the bottom row of lockers, food products were moved to the top row to keep the critters out.

Donations for the pantry also are community-driven. At first, Acosta and the center staff kept the lockers filled. Over time, other residents started contributing, even adding such items as handmade beanies to keep heads warm during winter.

To restock the pantry, the center periodically holds Fill the Truck drives, such as the one planned Saturday at the Dollar General in Oracle.

“Of course you’re hoping that the community is coming through and seeing that they’re empty and filling the void,” Acosta said.

The community aspect is part of what inspired Jessica McClard to pilot the Little Free Pantry movement in 2016 in Fayetteville, Arkansas. Years earlier, McClard needed government food assistance to get by, and she still remembers the stigma she felt whenever she used the bright yellow vouchers.

“I really did feel ashamed,” she said.

Wanting to help others, and inspired by the Little Free Library concept – a neighborhood book-sharing movement – McClard started the first Little Free Pantry near her church.

Thanks to news media attention and the internet, the idea soon took off. Five years later, a map on McClard’s website shows 1,800 Little Free Pantries across the U.S., a number the pandemic has further increased, she said.

“For a long time, food insecurity could remain largely hidden at the margins,” McClard said. “Now there are so many people that because of COVID-19 have been impacted economically and are now experiencing food insecurity.”

An added benefit of the neighborhood pantries is they provide a socially distanced way to help people safely during the pandemic. 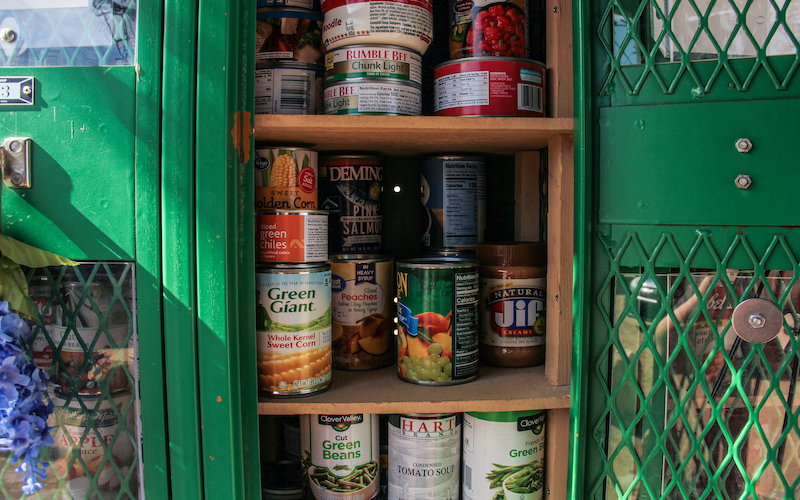 The Little Free Pantry in Oracle is stocked by donations from the community center and residents. The center also periodically holds Fill the Truck drives, such as one planned Saturday at a local Dollar General. (Photo by Travis Robertson/Cronkite News) 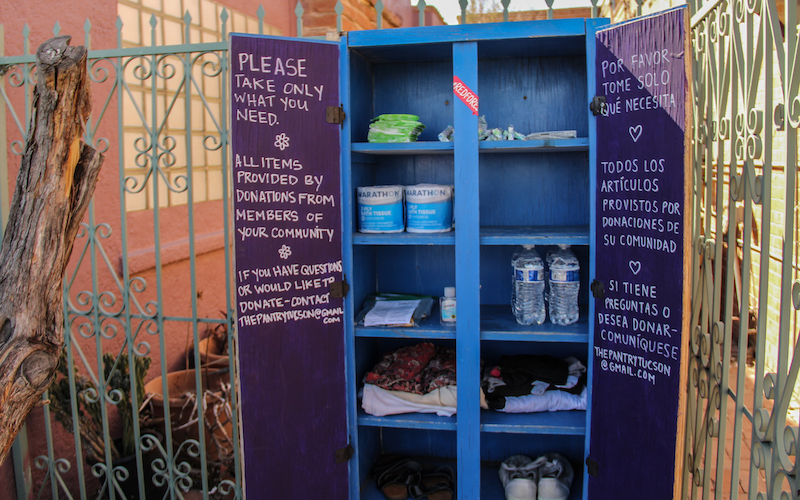 The south Tucson pantry sits next to a barbershop with a sign welcoming people in English and Spanish. At one point, those using the pantry covered the doors with thank you messages. (Photo by Travis Robertson/Cronkite News) 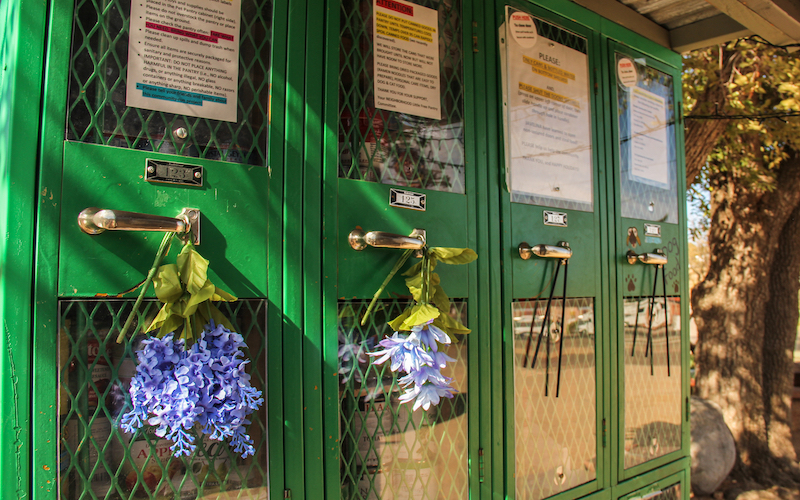 Community members had a big part in building the Oracle Pantry. The Fire District donated the lockers, and local artists decorated them. Volunteer handymen built a roof to protect the lockers during hot summers. (Photo by Travis Robertson/Cronkite News) 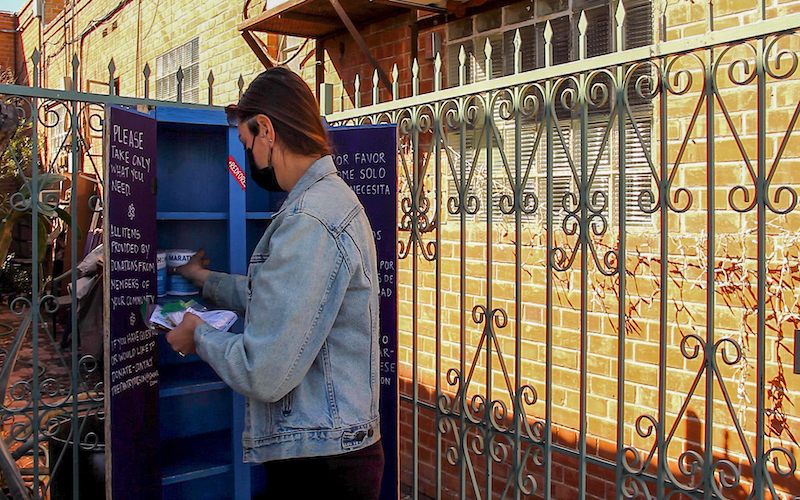 Cori Runyon, an Arizona State University graduate student who started a pantry in south Tucson in 2017, says food donations have increased since the pandemic began. (Photo by Travis Robertson/Cronkite News) 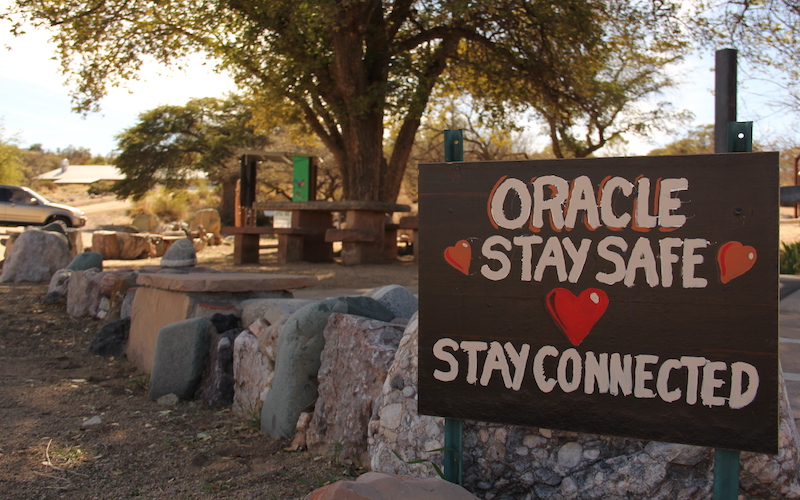 The Little Free Pantry movement first started in 2016 in Arkansas. Five years later, about 1,800 Little Free Pantries have been launched across the U.S. (Photo by Travis Robertson/Cronkite News) 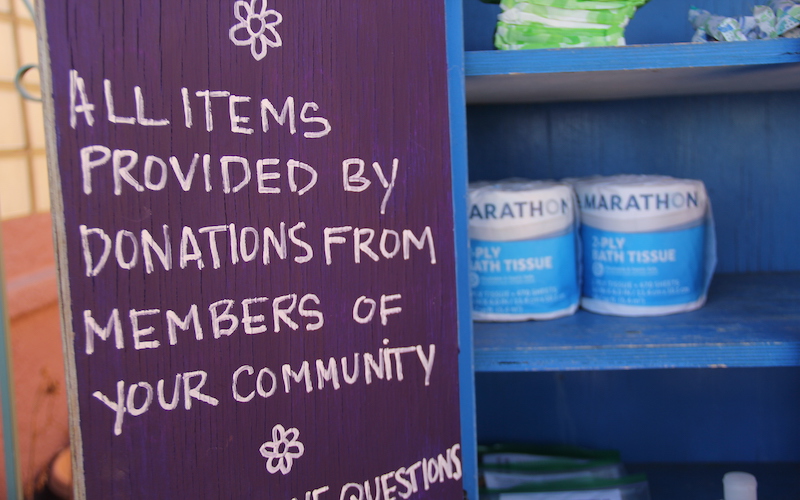 Cori Runyon started her Little Free Pantry with an aim to provide essential goods that people might not get at a food bank, including feminine hygiene products and toilet paper. When the pandemic started, food donations started coming in, too. (Photo by Travis Robertson/Cronkite News)

“We knew that a lot of the avenues that people traditionally used to volunteer, whether it be through a food bank or pantry or some other type of organization, were really struggling with the loss of volunteers,” McClard said. “This was a place where people could go and do something for their neighbors and still … be somewhat protected from the virus.”

Cori Runyon, an Arizona State University graduate student, started a pantry in south Tucson in 2017 as part of a mentorship program focused on social justice. She aims to provide essential goods that people might not get at a food bank, including feminine hygiene products and toilet paper.

Over the past year, Runyon has seen an increase in food donations from individuals and organizations like Food Not Bombs, a group providing free vegan and vegetarian food. 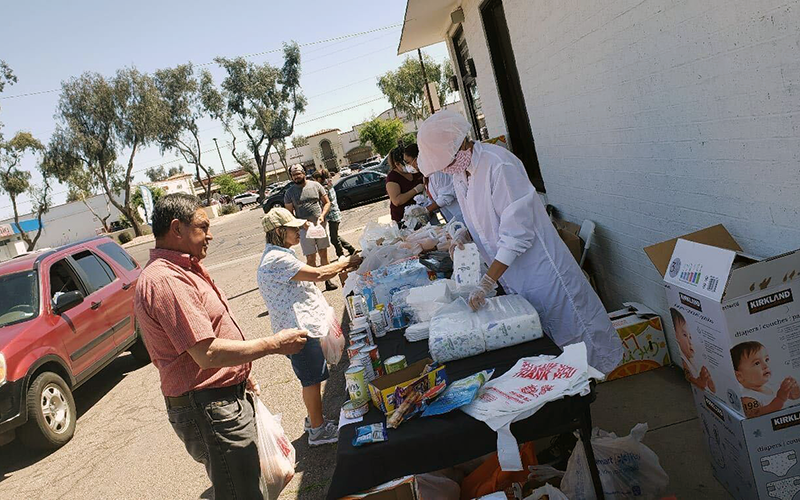 “They’ve had such an influx in donations of food that they’re trying to get it out to other projects that are getting food out there,” she said.

The south Tucson pantry, tucked between a barbershop and the office of a civil rights group, is a wooden box painted bright blue with a sign welcoming people in English and Spanish. At one point, those using the pantry covered the doors with thank you messages, Runyon said.

“They all express a lot of appreciation,” she said. “Lots of positive feedback from the community.”

When it comes to addressing food insecurity, Runyon believes her pantry has made an impact, even if that’s providing a small snack to someone who would otherwise have nothing.

“I don’t think it’s having a grand scale effect or data-changing,” she said. “But it’s just a little thing that can help someone here and there.

“I’d encourage other people to start food pantries in their own neighborhoods. There doesn’t need to be one organization that’s in charge of all this. … Every community should step up to care for its own less-privileged community members.” 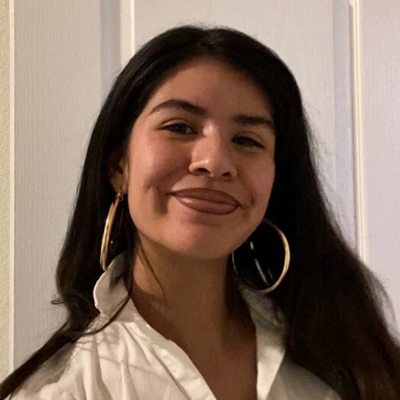 Melissa Estrada expects to graduate in spring 2022 with a bachelor’s degree in journalism and a minor in transborder Chicano/a and Latino/a studies. She is working for Cronkite News this spring. 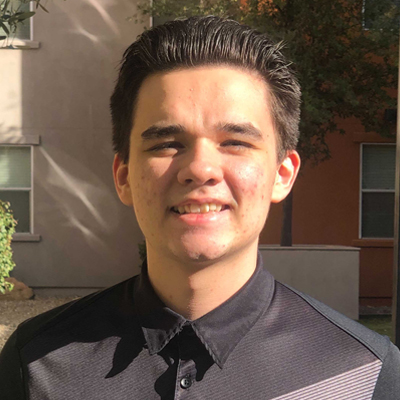