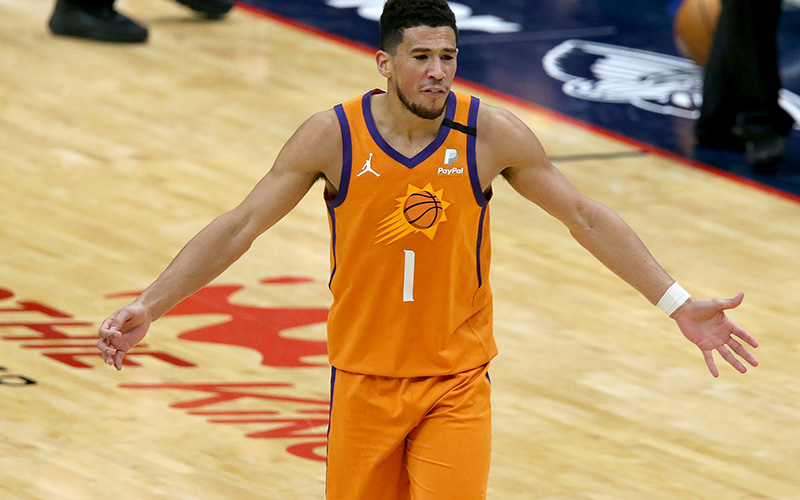 PHOENIX – Less than 24 hours after Phoenix Suns guard Devin Booker put up an All-Star-worthy performance against Portland Monday night, the 24-year-old was once again snubbed out of the NBA’s marquee midseason game.

Following the 132-100 blowout victory for the Suns that saw Booker score 34 points, coach Monty Williams was confident his guard would be selected for the game.

“There is no doubt about it,” Williams said. “No one can debate that Book’s not an All-Star … From my perspective, I don’t think you’ll find any coach in the league that would debate that he’s an All-Star.”

Except many did. NBA coaches were the ones who selected others over Booker. They did select his teammate Chris Paul

Following the announcement of the reserves, LeBron James tweeted, “Devin Booker is the most disrespected player in our league!!! Simple as that.”

Devin Booker is the most disrespected player in our league!!! Simple as that.

It was the second year in a row that Booker was not named an All-Star. He replaced injured Damian Lillard of Portland last year and could be up for a replacement spot again.

Captains and starters for the game were announced Thursday night. Captains James and Kevin Durant will be drafting the teams.

On Monday, Booker’s teammates praised his level of play and shared their expectations of an All-Star selection for him.

Mikal Bridges added, “you see what he does game in and game out, leads us to wins. He deserves it man.”

“Being able to grace the court with him, it’s unbelievable. But it’s no mistake,” Booker said of Paul. “Now being around it and seeing the work ethic, seeing the attention to detail, seeing the selflessness of wanting to get your teammates involved and being better.”

Other notable statistics for the new All-Star are Paul’s 1.2 steals per game, 4.5 rebounds per game and a 3.7 assist-to-turnover ratio all three of which lead the team for guards.

Paul and Booker together have led the Suns to a 20-10 record so far this season, placing them in fourth place in the Western Conference standings. Since January 28, the Suns have won 12 out of their last 14 games.

Before the Portland win, the Suns broke a franchise record for number of threes in a game with 24 against the Memphis Grizzlies on Saturday. Booker and Paul combined to contribute nine of those 24 threes.

In the same game, Paul notched six assists to pass Oscar Robertson for the sixth-most assists in NBA history.

“He’s competitive, he wants to win and it’s just an amazing accomplishment for one of the big guys in our league, one of the faces in our league, and the guy who does so much for so many people,” Williams said of Paul passing Robertson. “I’m just glad that he’s able to accomplish something like this.”

In addition to playing in the All-Star game, Paul has had a large role in organizing the game as the president of the National Basketball Players Association.

““I talked to (LeBron) maybe a week or two ago, talked to Steph, a few guys. Our executive committee, we get on calls and try to figure it out. There’s different situations,” Paul said of organizing the All-Star game.

Williams added of Paul’s involvement, “I couldn’t imagine trying to juggle all that and still do it all at such a high level and have the respect of every environment that he’s working in. It’s amazing.”

Paul is the 25th player in Suns history to be named an All-Star and the 64th all-time.