According to the Society of Baseball Research, the number of African American players in the MLB has fallen nearly every year since 1981, and by 2016 it plummeted to 6.7%, the lowest percentage since 1957. 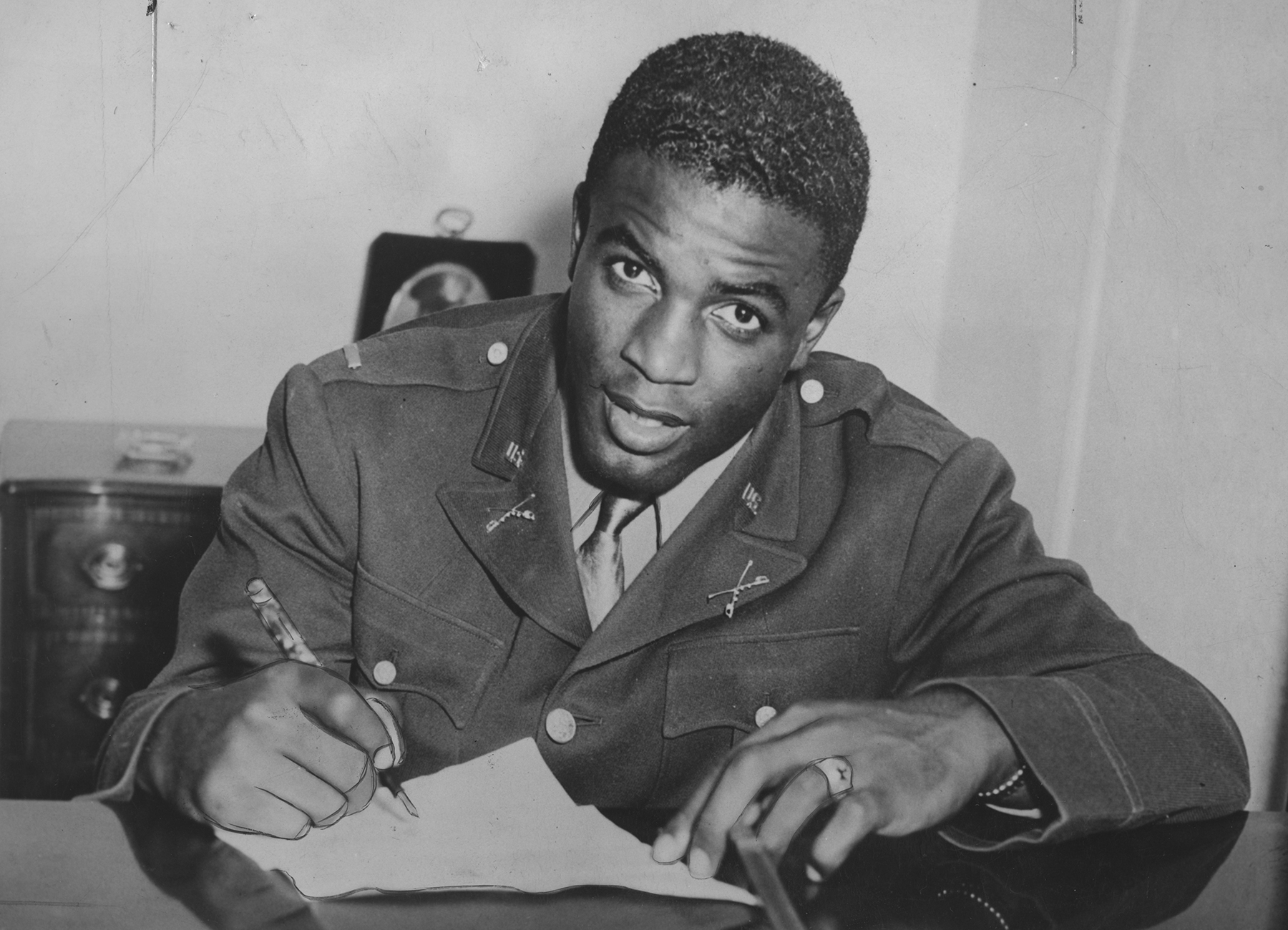 Jackie Robinson, signing paperwork with the Brooklyn Dodgers in 1945, opened the door for other Black players. Despite years of advancement, the number of Blacks in the MLB has declined in recent decades. (Photo courtesy of Afro American Newspapers/Gado/Getty Images)

It marked the end of one of the most important eras in sports history, one that saw the first African American play Major League Baseball in the modern era.

In April 1947, Robinson made his debut with the Brooklyn Dodgers as the first Black player to appear in a MLB game. He was followed three months later by Larry Doby and several others to remove the color barrier between MLB and the Negro baseball leagues.

In a racially divided country, Robinson and company saw resistance from much of the white community but continued to play the sport he loved to give other African Americans an opportunity to play on baseball’s biggest platform.

During the 1981 season, 17 years removed from the Civil Rights Act of 1964, MLB saw its highest-ever Black representation at 18.7%, according to SABR.

By this point, Jim Crow laws of the South had been ruled unconstitutional, but racism was prevalent. Many African Americans still had a passion to play baseball and continued the integration of the sport from the Robinson days all the way into the mid-1990s.

But 1994 is when researchers started to notice a decline of African Americans in the sport. While some MLB fans say the recent numbers must be inaccurate because they see a decent number of “black” players, including such stars as Yasiel Puig, Yoenis Cespedes and Francisco Lindor, who are black Latinos, not African Americans.

Theories vary as to why African Americans continue to lose interest in the sport.

“I think one of the factors is the lack of opportunities, unless you have money at a young age, to play youth baseball,” Richardson said. “It used to be where everybody in your town played on the local Little League teams, and it was very affordable. But then when the club and travel ‘elite’ teams started being formed, it started (pushing away) people of diverse cultures.

“It’s not uncommon for a kid that wants to play club baseball (to pay) $800 a season (with) monthly dues. A lot of kids in poor populations have a tough time (paying for that). With basketball, all you need is a basketball, and you go down to the park by yourself. With baseball, you can’t do that” anymore. 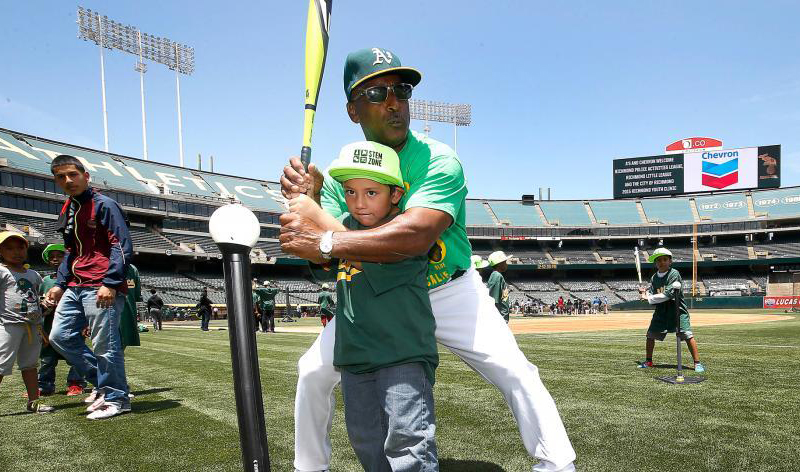 In Arizona, poverty rates were higher in 2019 for the category “Black or African Americans” (20.3%) than they were for white residents (13.2), according to the Census Bureau.

Richardson believes another factor is that baseball is more of a skill sport rather than one where athleticism can cover up deficiencies in fundamentals, as is the case in basketball and football.

“You can be the fastest guy, the guy with the highest vertical jump, the strongest arm, but (baseball is) still kind of a skill game,” Richardson said. “To be successful at baseball, it takes a lot of time, a lot of repetitions and unfortunately, today in the United States, you need to have some money to get those repetitions.”

Billy Wilson, a Tolleson High School alumnus who plays in the Cleveland Indians minor league system, said his team and the Indians organization as a whole is more diverse than most in professional baseball.

“With the Indians, I feel like we have a very large amount (of diversity) compared to other teams of Black players,” said Wilson, who is Black. “And we’re all pretty close, so it’s kind of cool. I think that’s something Indians probably feel like we’re pretty good (about in the) organization. They look out for that kind of stuff and try to harp on having a big blend of players. The majority group is the Latin, Dominican, Venezuelan and Cuban players in the minor leagues. Everybody else is sprinkled in here and there.”

Wilson also believes financial factors are a big reason why other organizations struggle to bring in African American players.

“Just looking based on statistics, socioeconomic status (for) African Americans (is) a little different than other groups in America,” Wilson said. “Of course, you’re not going to see many African Americans play baseball, and they probably aren’t going to have the resources to be good. With baseball being such a mentally draining sport, you’re not (going to be) really good early on, (so) you’re just going to hate it more and more. (At that point), why would you want to continue to pursue it?”

Former Oakland Athletics second baseman Shooty Babitt has noticed a demographic change in baseball since his final appearance in the MLB in 1981.

“Probably in about the last 10 years that I was playing is when you start to see the decline of African Americans in baseball,” said Babitt, who is Black. “We were at an all-time high at 20% when I grew up playing.”

Baseball has struggled to quicken the tempo of the game and make it more interesting. Changes include decreasing the time between pitches, but they haven’t been significant. Babitt said baseball’s lack of action also contributes to the reluctance of Black kids to play.

“It used to be a fun game,” he said. “It wasn’t so analytically driven. It wasn’t smart people that were playing. It’s a bunch of robots in the game now.”

“People that look like me don’t see themselves on the baseball field anymore,” Babitt said. “So why would they want to play?”

Despite the lack of African American players, baseball continues to grow in diversity. It is becoming more of an international sport, as the percentage of white players has actually declined from 70.3% in 1989 to 63.7% in 2016, according to SABR. This is due to an increase of Latino players in the sport. The number of Latinos has more than doubled since that time, increasing to 27.4% from 13.2%. The number of Asian players is expected to increase as well, as the percentage has increased to more than 2% in 2016.

Wilson said cultural differences in Latin America are the biggest reason many MLB players emerge from that region.

“In those countries, you are raised to be a baseball player or you’re raised to do something else,” Wilson said. “Their escape is baseball, so obviously, they get really good at it.

“They have whole facilities designated to just baseball training out there. You don’t even go to school, (and) you just grind in baseball. (In the U.S.), you got options. As you’re getting beat up in baseball, you can just … quit and go do something else that you’re better at, is cheaper, and all your friends are doing.”

“Being in the Dominican, I’ve seen those players in the grind that they go through and not having anything to fall back on,” he said. “If they don’t make it to the (major leagues), there’s nothing really else for them to fall back on. That’s really what drives them and keeps them determined, and that’s definitely something that’s pushed the Dominican players.”

Successful African Americans players might be the answer to attracting young players to the game, Baumgartner said.

Phoenix East Valley Little League coach Demeitris Wauqua has noticed a low number of African American baseball players on his teams as well as back when he played Little League.

Wauqua noted that many African American baseball players play football or basketball as well. When it comes to choosing one sport, he said, athletes tend to shift away from baseball because of the NCAA’s baseball scholarship system.

“Colleges (only) provide a partial scholarship for baseball,” Wauqua said. “With football, they’re able to get a full ride. Possibly (football or basketball) is an easier route for (African American) athletes.” 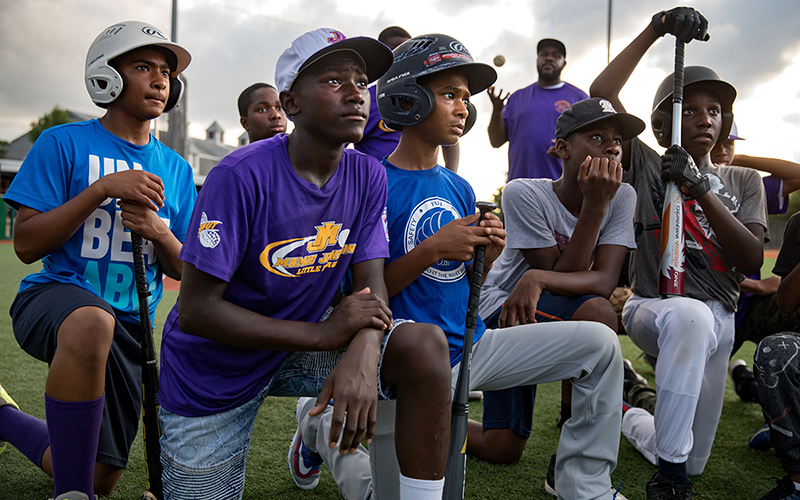 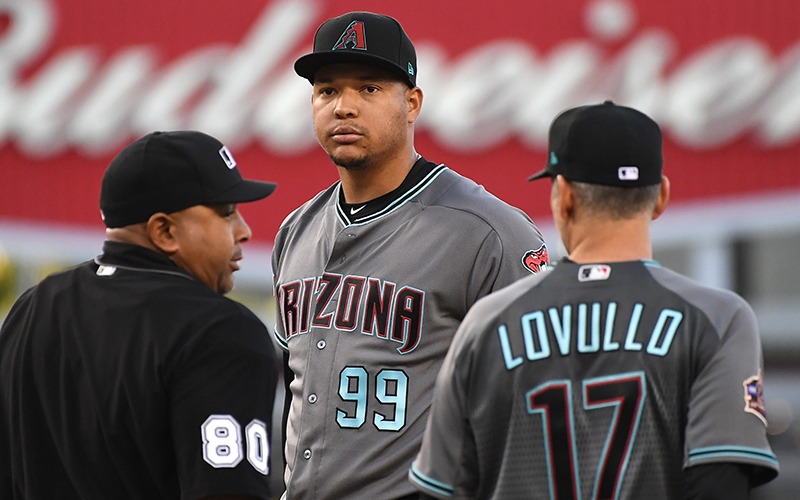 Left: Attracting African American youth to baseball is a significant concern for Major League Baseball, which has seen the participation of Black players decrease steadily since 1981. (Photo by Evelyn Hockstein/For The Washington Post via Getty Images) Right: Pitcher Taijuan Walker says he often is the only Black player in the clubhouse, as was the case when he was with the Arizona Diamondbacks in 2017. (Photo by Jayne Kamin-Oncea/Getty Images)

Chris Davis, a Phoenix Little League parent, started playing baseball when he was 9. He immediately fell in love with the sport watching Mets star outfielder Darryl Strawberry, an African American who played from 1983-99.

Davis also thinks kids grow up with a stronger interest in sports like football and basketball. His kids play baseball and when he asks them what their favorite sport is, they always list baseball last.

“People talk about (athletes like) Odell Beckham,” Davis said. “They don’t talk about (African American) players in MLB. (There’s) Adam Jones, and I can’t even think of anyone (else) off the top of my head.”

Even as a baseball player, top athletes that come to his mind are football and basketball players like the NBA’s Steph Curry and LeBron James and the NFL’s Le’Veon Bell. Davis added that many kids overall are bored by the sport’s “standing around” and slow pace. Although the issue is not getting any better, he does believe that the sport could take steps to improve interest among African Americans.

In addition to the sport failing to market key African American stars, including Andrew McCutchen, Mookie Betts and Adam Jones, Davis thinks African Americans shy away from the sport because it’s so expensive to play.

For his son to play Little League, it cost him $275 before buying a glove, bat and other gear. After buying all the equipment, Davis said, costs can be close to $1,000 per season, depending on what brand is purchased. Many African American families don’t have the financial resources for their kids to play baseball as opposed to football or basketball, which are relatively cheaper to play, Davis said.

“Look at (African American) players in hockey,” he said. “I mean there’s just no interest, and that’s (where) I see baseball going.”

MLB has seen growth in general youth participation in the sport, in large part due to the league’s “PLAY BALL,” an initiative designed to spark widespread participation in all forms of baseball activities among all age groups. According to the Sports & Fitness Industry Association’s Topline Participation Report, baseball has grown 20% in participation since 2014, which is the year prior to the launch of the initiative.

No statistical evidence of such growth among African American youth in baseball has been shown, but recently promoted Chief Baseball Development Officer, Tony Reagins, has put multiple diversity-focused programs in place.

Of those programs, the one that hopes to make the biggest impact on drawing baseball interest from African Americans is Reviving Baseball in Inner Cities (RBI) because of the belief inner city youth heavily favor football and basketball. Programs like the Washington Nationals Youth Baseball Academy are expected to be key in reviving baseball interest in inner cities.

According to an article from health.gov, more than 90 percent of participants in YBA PLAY, one of the Academy’s most popular programs, said that their baseball skills improved, that they learned new things and that they want to keep practicing and getting better. Comparable programs that give youth these types of opportunities and development can cost families up to $4,000 a year.

In 1956, Robinson’s final year in the majors, African-Americans made up 6.7 percent of major league rosters. At the start of the 2020 season, that number was 7.8 percent, according to Major League Baseball, and several teams, including the Diamondbacks didn’t have an African-American player on their Opening Day roster.

The hope by many is that changes. Soon.