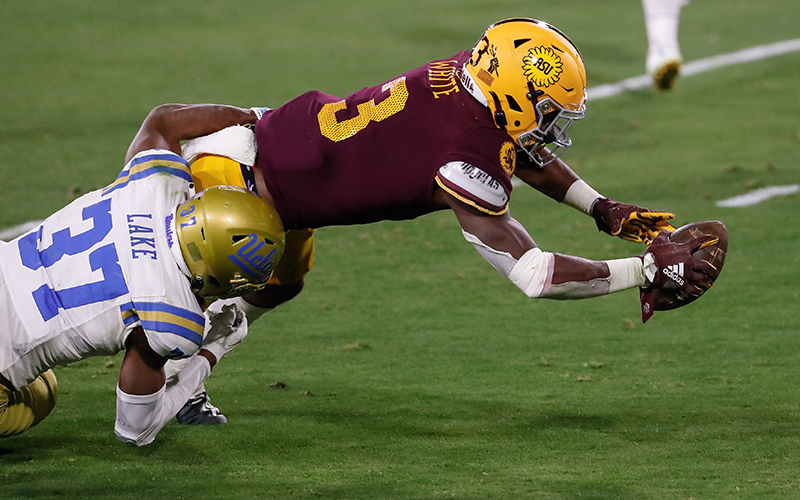 Like Arizona State running back Rachaad White, the Sun Devils were close but just couldn’t get over the hump against UCLA. (Photo by Kevin Abele/Icon Sportswire via Getty Images)

PHOENIX – Arizona State was bound to struggle adjusting to the speed of the game after a COVID-19 outbreak sidelined the football program for nearly a month. Its opponent, UCLA, had just come off a win against Arizona to improve to 2-2.

But what disappointed the Sun Devils most after falling to the Bruins Saturday night was the missed opportunities late in the game that cost them their first victory.

“We had an opportunity to close it out, and we just couldn’t do it,” coach Herm Edwards said after the game. “And that’s a shame, because we did some things that were pretty good.”

Three ineligible receiver downfield penalties negated ASU gains, including a 39-yard touchdown from Jayden Daniels to receiver Andre Johnson.
A few plays after Johnson’s non-touchdown, a fumble at the UCLA 1-yard line gave the ball back to the Bruins as the Sun Devils were poised to even the score at 17.

When discussing the turnover and the seemingly inevitable tying touchdown it prevented, Daniels alluded to the off-field struggles ASU has experienced this year as an example of the importance of maximizing opportunities in 2020.

The Sun Devils won the second half 15-8, a fact potentially lost in the minutiae of ASU’s second-half mistakes.

After a first half in which ASU looked largely listless and fell behind 17-0, the Sun Devils’ offense awoke despite two second-half turnovers. The total could have been even higher but for the fumble that scuttled the potential game-tying drive in the fourth quarter.

Daniels, who threw a third-quarter interception, said the Bruins’ defense tired in the second half, but ASU’s turnovers negated drives that could have helped them win the game.

“UCLA started getting tired as the game went on,” he said. “In the first half, they were playing (us) stout. But I have to say what really killed us was just the turnovers, the fumbled snap at the 1-yard line, the pick. You just can’t turn over the ball.”

Daniels did say he felt his chemistry with ASU’s young receiving corps, an issue in the game against USC, was rectified somewhat against UCLA. Freshmen LV Bunkley-Shelton and Johnny Wilson tied for second on the team with four catches each, and Johnson had a 35-yard reception in addition to his 39-yard touchdown that was called back. 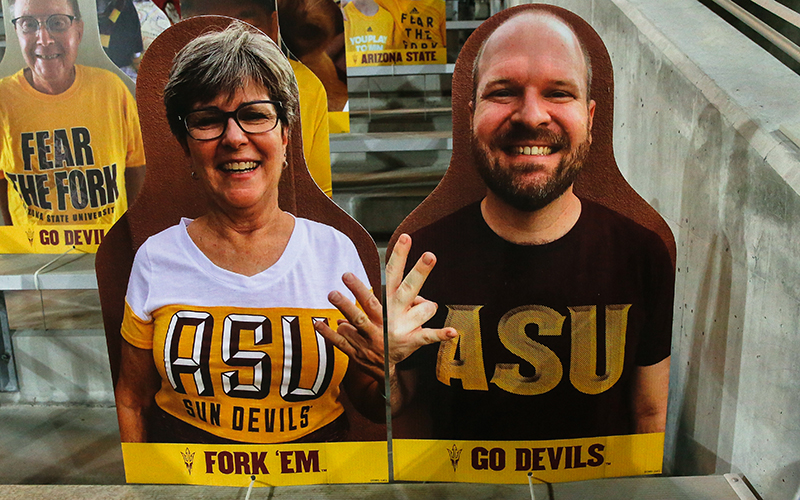 Although fans couldn’t attend the ASU-UCLA game, cardboard cutouts could. Unfortunately for the Sun Devils, they could produce a comparable gameday atmosphere. (Photo by Kevin Abele/Icon Sportswire via Getty Images)

“They got the first-game jitters out of them,” he said. “We had that time off, we’ve just been practicing and working on building more chemistry and just building off from there.”

ASU also showcased an explosive new weapon on special teams in defensive back D.J. Taylor. The speedy freshman, a 247Sports four-star recruit out of high school, showcased elite burst and nearly took a UCLA kickoff to the end zone near the end of the first half. Only a tripping penalty from the UCLA kicker prevented a likely touchdown, and the Sun Devils took advantage of the field position with a long field goal to end the half.
Edwards raved about Taylor’s positivity and said Taylor was extremely excited about getting a shot to return kicks.

“The delight he has in his personality, it’s just radiant,” Edwards said. “He’s always smiling. You know, I looked at him, I said, ‘Now, you know you’re gonna return kicks, right?’ And he’s just smiling, ‘Yeah, coach.’ I said, ‘This is like your first time doing this!’ And he goes, ‘Yeah coach, I’m gonna run one back for you.’

“I tell you what, if they didn’t get him there on that one, he might’ve ran one back. I mean, he is a special guy with the ball in his hands.”

The ASU defense also settled in in the second half, allowing just one touchdown. But it was a crucial one late in the fourth quarter that allowed the Bruins to retake the lead for good.

ASU defensive end Tyler Johnson said the defense didn’t change anything about its scheme on the final drive, but UCLA was able to find enough openings to continue marching down the field.

“We were just trying to contain the quarterback and just letting our DBs work with what they had in coverage while we were still trying to maintain a good rush and close the pocket in on him,” Johnson said. “Unfortunately, they were getting away with some things and time got away from us.”

He further explained that “stuff just kept happening,” including a facemask penalty that awarded UCLA extra yardage and a pass interference call in the end zone that awarded the Bruins a first down at the 2-yard line. UCLA scored on the next play.

Edwards said he had been in very few games where holding teams to eight second-half points ended in a loss. But he also acknowledged that ASU still had plenty of opportunities to win the game, whether on the Sun Devils’ last drive or by stopping the Bruins one more time.

“Not many. You generally feel like you’ve got a chance to win,” he said. “The last two games haven’t been a lot of fun. We had opportunities and we just didn’t do it.”

This was always going to be an unusual season for ASU. COVID-19 testing, social distancing and empty stands were what the Sun Devils signed up for when the Pac-12 announced it would hold a fall football season. But the COVID-19 outbreak within the program and the subsequent cancellation of three straight games shifted the focus of this already surreal seven-game season.

Edwards acknowledged last week that the remaining games in the 2020 season would contain more of a focus on player development than originally planned. With so few opportunities to evaluate players at game speed, the necessity of getting younger players on the field grew.

The early returns on offense are positive, especially at the skill positions. Despite losing first-round pick Brandon Aiyuk to the NFL, the receiving corps looks to be deeper and more talented than a year ago. Running backs Chip Trayanum and Rachaad White provide a nice one-two punch in the backfield.

ASU’s 2021 recruiting class ranks 38th in the nation and sixth in the Pac-12, according to the 247Sports Composite. The Sun Devils have 15 players committed to the program, with more additions likely during the December period. Four-star cornerback Isaiah Johnson is the current jewel of the class, the No. 135 player in the country who will help provide depth to offset the potential losses of senior corners Chase Lucas and Jack Jones to the NFL Draft. Both Lucas and Jones will be eligible to return in 2021 under the NCAA’s revised eligibility guidelines due to COVID-19.

Reports have indicated ASU may be in contention to sign the No. 1 player in the country, game-wrecking defensive end Korey Foreman of Centennial High School in Corona, California. Few experts have predicted Foreman will sign with ASU, but the Sun Devils have garnered some buzz in recent weeks. ASU’s highest-rated recruit in program history, linebacker Vontaze Burfict, also attended Centennial.

Foreman cited the Sun Devils’ NFL coaching experience as the primary reason he is seriously considering the program in a video published by Rivals.

Tyler Johnson said after the UCLA game that ASU defensive line coach Robert Rodriguez, newly hired this year from the Minnesota Vikings’ staff, has already elevated the technique and production of the unit in his first year with the program.

“It’s done great things. We’re getting in the backfield quicker, we’re keeping our balance, we’re hitting the ball carrier behind the line of scrimmage, so Coach Rod obviously knows what he’s doing,” Johnson said. “He’s fresh out of the league, so putting what he’s done with NFL guys and instilling that into us, it’s been a great blessing.”

As Foreman’s potential future position coach, Rodriguez will draw upon every ounce of his NFL experience in his attempts to convince Foreman to come to ASU. Landing Foreman would be a game-changing coup for the Sun Devils and raise the ceiling of their 2021 defense significantly.

With Daniels, the program’s third-highest-rated recruit, eligible to declare for the draft in 2022, 2021 will be a crucial season for Edwards in his fourth year with ASU. How well the Sun Devils finish out their 2021 class and build a complete team around Daniels will determine whether they can challenge for the Pac-12 Championship and whether ASU can launch itself into the conference’s upper echelon.