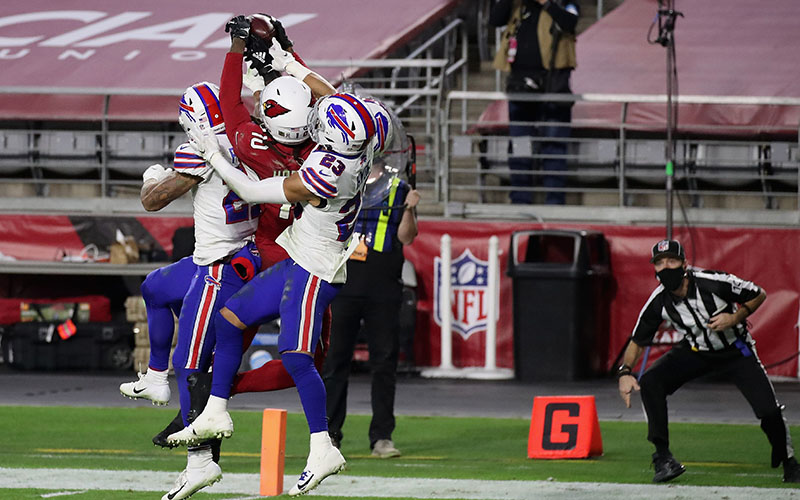 Arizona Cardinals fans from around the country went crazy after wide receiver DeAndre Hopkins made a near-impossible catch in the team’s victory over Buffalo. (Photo by Christian Petersen/Getty Images)

PHOENIX – Where were you when Kyler Murray scrambled to his left, dropped Buffalo’s Mario Addison with his trademarked hesitation step and flicked the football, off-kilter, 50 yards downfield, smack dab into the center of the humongous, Jump Man gloves of Cardinals receiver DeAndre Hopkins as they rose above a cluster of three defenders?

Three friends, all exuberant Cardinals fans, rejoiced together despite being separated by thousands of miles as the “Hail Murray” delivered a 32-30 Cardinals triumph.

“It’s bittersweet,” said Casey Koziol, an admitted die-hard Cardinals supporter. “Had I not had to go to Nashville, I would have been at that game.”

Koziol spent the weekend more than 1,500 miles away from his usual season ticket-holder’s seats at State Farm Stadium because he was assisting his mom with his grandparents’ move from Kentucky to Florida.

He said he was initially worried he’d be unable to tune into the game at his older sister Blakeley’s Tennessee home because she had recently canceled her cable subscription.

He was relieved to discover she could still get CBS’ Bills-Cardinals broadcast, albeit not in high-definition. But Koziol was thrown for another loop when he was asked to tag along with his sister, who was on call and needed at the hospital. He said he wound up observing most of the first half from a livestream on his iPhone, returning just in time for the Cardinals fourth-quarter heroics.

That was at about the time his buddy Jacob Lille was dashing through his apartment complex.

“At first, I thought it got picked, and then (Andy Isabella) started celebrating,” said Lille, an Arizona State graduate who was Koziol’s classmate at Chaparral High in Scottsdale. “I ran outside of my apartment, and ran down the hall, about 60 to 70 yards. It’s a big apartment (building).”

And, it’s in North Druid Hills, a suburb of Atlanta, Georgia. Approximately 2,000 miles from Arizona. 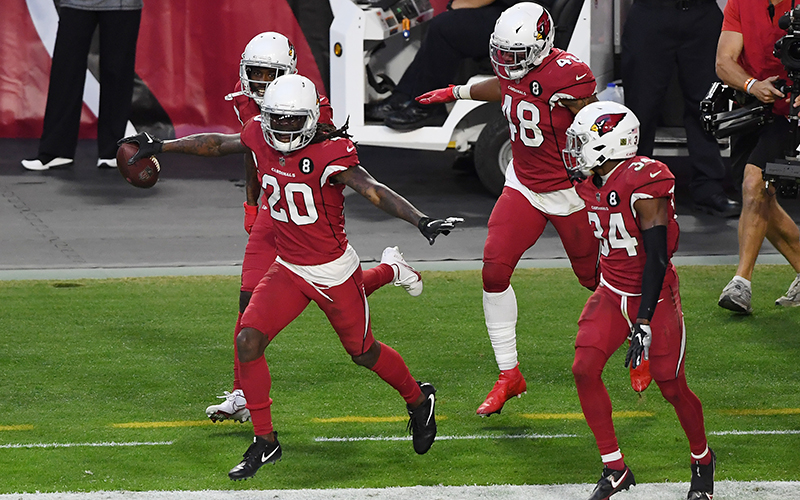 Lille and Koziol root, ritually, for the Cardinals. Coincidentally, neither was in the desert when their team pulled off the improbable.

Furthermore, Lille wasn’t even planning on watching the game because it wasn’t a priority. He’s in his first-year of law school at Emory University and was supposed to be preparing for finals. That was, until six members of his class tested positive for COVID-19, and faculty sent out a message Sunday afternoon, pushing back the start of finals week.

“In a very 2020 way,” the two friends managed to witness what Lille called “one of the greatest catches I have ever seen.”

But he appreciated the throw, too.

“To be honest, I think his throw is not getting enough credit because that was an absolute dime,” said Lille, adding his roommates went bonkers, despite their general indifference to his favorite team. “(Seeing) their reactions, too, is just kind of fun because they have no emotional ties to the team, but how could you not go crazy over what happened?

“This one dude was like ‘D-Hop is the greatest receiver I have ever seen.’ I don’t think anyone was not floored by what they just saw.”

“(Blakeley and I) started freaking out, like ‘Holy (smoke), did this really just happen?’ We’re screaming, we’re like ‘Oh my God!'” Koziol said. “The Hail Mary (had gone) up, and I’m just thinking the game is pretty much over.”

Koziol’s heart may have skipped a beat when Murray rolled out to his left, increasing the degree of difficulty of the throw. But he was relieved, he said, when he spotted Hopkins entrenched in a tangle of defenders near the front of the end zone.

He said he thought the toss had a shot, and was just glad it was either Hopkins or Larry Fitzgerald in the vicinity. He called Murray’s pairing with Hopkins a “match made in heaven.”

“Little Kyler, you don’t expect that type of arm from him,” Koziol said. “There’s only a handful of quarterbacks that make that throw.”

Namely, he mentioned Murray, Aaron Rodgers of the Packers and Patrick Mahomes of the Chiefs.

According to Next Gen Stats, the “Hop and a prayer” had a 16.9 percent completion probability, a fairly high-mark despite Murray’s off-balance posture, and the feisty swarm of defensive backs encircling Hopkins just feet away from the front-left pylon.

“Josh Rosen would not have made that throw,” said Koziol, praising Arizona’s front office for acquiring the diminutive dynamo No. 1 overall in the 2019 NFL Draft. “In Kyler’s era, this is definitely his best moment, other than that whole Seahawks game on Sunday night. This might top that, though.”

Fellow Firebirds alum Mason Fox had his eye on the game, locally. At least when he had the chance.

“I was kind of in shock for about five minutes. I’m not going to lie,” he said.

Fox watched from home nervously as Buffalo extended its lead via field goals and a trick-play throw-back touchdown catch to Bills quarterback Josh Allen. Then he clocked-in for his dinner shift at Slanted Rice Vietnamese Bistro in Scottsdale at about the time the Cardinals started to rally.

He said he was able to see glimpses of Arizona’s comeback, but when the dinner-rush hit, he was slammed, and unable to closely follow along on his restaurant’s make-shift television, which was outfitted with rabbit-ear antennas, replacing cable programming that was cut months ago due to pandemic hardships.

Much like the miracle that followed, Fox glued his eyes on the action just in the nick of time.

As he walked out of the kitchen, headed to greet a new table of patrons, he turned toward the television screen. Murray had just taken a shotgun snap, and was dropping deep into the pocket. Never mind, Fox was totally unaware of Stefon Diggs’ diving touchdown snare, merely minutes earlier. All he knew was his team was on the verge of a second-consecutive heartbreaking loss.

“As busy as I was, I was somehow able to, literally, get one moment to watch the last seven seconds,” Fox said. “It was wild, man.”

Once his shock subsided, Fox was overcome with excitement.

“I just screamed ‘Oh my god, he caught it,’ without even thinking. I didn’t care that I was in a crowded restaurant. The fan in me was just going crazy,” he said. “I just started doing a little dance, and then went up to my table and was like, ‘Sorry about that, how can I help you guys?'”

Understandably, his customers paid no mind to his bopping and big smile. They had seen it, too.

“We all just kind of looked at each other like did that really just happen in front of our eyes? Did
we really just witness that?” said Fox, almost 24 hours and two dozen rewinds later.

“I’m not going to scream ‘Greatest Cardinals team ever,’ or ‘We’re going to the Super Bowl,’ but I have a lot of faith that this team can definitely make some noise. So let’s hope they ride this wave of momentum they just created.”