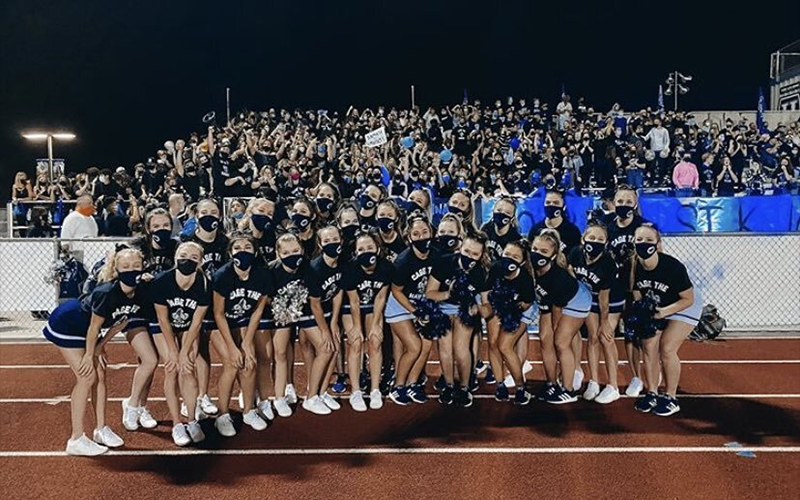 Photos like this one on social media of the Higley High School spirit line and its fans at football games have raised questions about the fan behavior and protocol during the COVID-19 era. (Photo courtesy Highly High School Spirit Line Twitter account)

GILBERT – With several schools experiencing outbreaks of COVID-19 during the high school football season, social media has served as a platform for those pointing fingers at programs who appear to have stands packed with fans, many without face coverings.

But David Hines, executive director of the Arizona Interscholastic Association, which oversees high school sports in the state, said that the AIA can only issue protocols for players, coaches and officials on the field during the season.

It’s up to school districts to establish guidelines for fans, based on the recommendations of county health departments.

Photos of big crowds at schools such as Highland High, Higley High and Williams Field High in Gilbert and the private school Northwest Christian in Phoenix have surfaced on Twitter. Some are from fans and others from media members and they are often accompanied by comments about how closely fans are packed into the stands or the apparent lack of masks.

Hines said he is aware of the tweets, but noted that the crowds are outside the AIA’s jurisdiction. 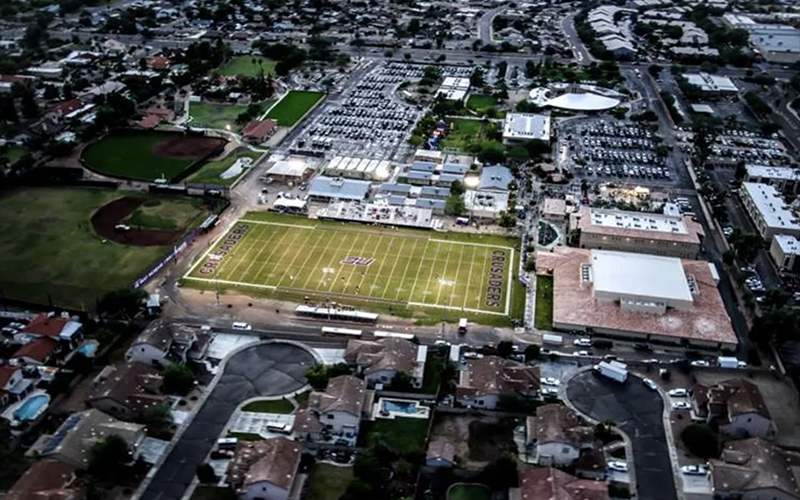 Northwest Christian School in Phoenix was the subject of criticism by a Valley journalist who questioned the large crowd and poor social distancing among fans at a recent game. (Photo courtesy Northwest Christian)

“We put out a Return to Play document to get kids and coaches back to play,” Hines said. “We also have modifications, which are required for the schools to follow. Now part of our modifications is that the coaches, bench players, bench personnel, etc. all have to be in a mask all the time.

“Obviously, we have kids that come in and out of the game, that’s a little different story. The fans themselves are really under the purview of the school. During the regular season, the schools are in charge of those games.”

While the AIA does not have jurisdiction over how schools handle spectators, Hines said some schools are more diligent about ensuring that their fans are social distancing and wearing masks.

“Our recommendation is that all fans have a mask when they come in and keep a mask on when they are in that facility, especially in indoor facilities, because now we’re closer together, we have less ventilation, and all those criteria,” Hines said. “However, we have had some schools that aren’t quite as diligent as others with the requirement to their fans.

“We have some schools that are in counties where a mask mandate is not required. We’ve had a couple issues there, but what we would say is, we still communicate to the schools and say, ‘Hey, we have a big concern because you were not following the protocols and …then we have less likelihood of being able to finish our season. And really, we’re doing this for the kids.'”

Districts have different protocols. When Higley announced its plans for fall sporting event attendance, it did not put a limit on the number of fans that can attend. Its sole limitation was for an athlete’s household, which is set at four.

Several Valley media members, including Arizona Varsity reporter Ralph Amsden, have raised questions on social media about the seriousness of the Gilbert and Higley school districts’ football protocols and also pointed out that he would not be appearing at any more Highland football games. Highland officials were not available for comment, but their football team Twitter account did reply to Amsden hoping to clear the air.

“Ralph, you need to know that we’re doing things by the book at Highland,” the tweet read. “Our coaches have the utmost integrity and we have an incredible (athletic director) who’s being very vigilant with our sports programs here.”

Highland was not the only school in Gilbert that has faced scrutiny on Twitter. On Oct. 24, Gridiron Arizona surfaced a photo from Williams Field showing a large crowd with no masks, but later said that the photo was from 2019.

Higley district athletic director Aaron Dille, who oversees Higley and Williams Field, clarified that the picture was actually “two or three years old” and mentioned that the school district had tightened their football spectator protocols due to recent COVID-19 case spikes in Maricopa County.

“We were previously (allowing) 75% capacity for home games,” Dille said. “We are now moving to 33% capacity based on increased positive tests around the state and Valley. For future home games, it will be at a max of 33% capacity. (Mask-wearing is) strictly enforced. We’ve actually removed fans for refusing to wear them.”

“They allowed us into a place to change clothes,” Taylor said. “There were people there encouraging people and kids that were running around to keep social distance. Lots of masks, and I really (couldn’t tell) how many people were in the stands. Sometimes I don’t know if there’s anybody over there (because) I just don’t pay attention to that. I asked our other coaches, and they said that it looked like there were people there, but it wasn’t packed.”

Taylor reiterated that Centennial is doing their part to keep athletes safe, and the Coyotes have not had to cancel a single game so far.

“We’re doing the very best we can, we are keeping track of kids,” Taylor said. “We are trying to keep social distance, (keep wearing) masks, and washing (our) hands. We’re trying to be careful and follow every rule so that we can keep (the season) going.”

The concerns for high school football spectators in Gilbert did not stop with just Highland and Williams Field. On Oct. 30, the spiritline for Higley High School tweeted a photo with the caption, “We love our Knights,” with a large student section behind them.

The entire spiritline is wearing masks in the photo, but it is difficult to tell whether the majority of the student section is. Desert Ridge was forced into quarantine after their Oct. 16 matchup against Higley. No one from Higley’s athletic department replied to interview requests, but the revised protocols that Dille explained will apply to future games at Higley.

Concerns about spectator protocols extended to the other side of the Valley, where a photo from an Oct. 3 Northwest Christian game on the west side of Phoenix was tweeted by Daily Independent Sports Editor Richard Smith. The photo showed a large crowd with little social distancing and fans that appeared to be mostly without face coverings.

The tweet from Smith read, “I genuinely enjoy covering Northwest Christian. Not tonight. The size of the home crowd and lack of masks has me nervous for everyone there (including myself).”

I genuinely enjoy covering Northwest Christian. Not tonight. The size of the home crowd and lack of masks has me nervous for everyone there (including myself) 2 caveats about the photos 1) Cactus was also quite crowded Week 1 with no visitors stand but at least most ppl masked up pic.twitter.com/7bv0tKZyus

Smith explained his tweet and described the atmosphere at Northwest Christian that he felt was unsafe.

“If you ever see their campus, it’s a very small area where their stadium is,” Smith said. “There is no track around it, so it’s condensed to begin with. In the home stands, I would say (there were) approximately 500 people (and) minimal social distancing. I went across to the Peoria side during the second half to kind of get away from the (crowd). I did notice there was some social distancing, But I would say (about) 5% of the crowd was wearing masks.”

Obviously, Smith has never seen anything like this during the 2020 season, leading to him expressing his frustrations on Twitter.

“I felt compelled to tweet something on it because this fall, between volleyball and football, I’ve been to eight other schools and none of the other schools had a (crowd) like this,” Smith said. “All the other schools are public, but they all require masks. They all have people there to enforce distancing. This was completely unlike anything else I’ve seen.”

Northwest Christian did not return calls to Cronkite News.

Overall, Hines is satisfied with the way most schools have handled COVID-19 protocols, despite the concerns coming from Gilbert.

“We have had some challenges. We have had some cancellations. But our schools, our athletic directors, our coaches, and our kids have done a very good job following some of the modifications that we put into place, doing things that they need to do to keep the season going.”

Hines believes that most teams have gone the extra yard to be protective, and everyone is doing their best to keep athletes and their families safe. He added that AIA protocols will be enforced when the playoffs begin, including limiting the number of spectators, requiring social distancing and mandating masks.

“When it switches to the playoffs, it is now an AIA run event,” Hines said. “All those bets are off. We will have a percentage of the capacity that will be able to come, you will come in a mask, you’ll wear a mask, or you’ll be asked to leave. There will be no exceptions for that.”

With all of the talk and exposure on Twitter, many AIA football fans and media are asking the same question: “What do we do now?”