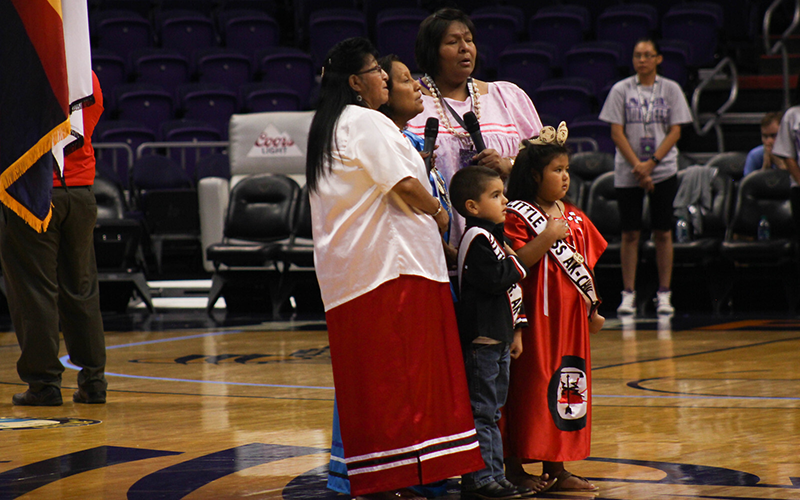 PHOENIX – After a one-year absence because of the COVID-19 pandemic, the Native American Basketball Invitational will return in July, showcasing indigenous basketball players from across the U.S., Canada and New Zealand at venues around the Valley.

The championship games will take place at the newly renovated downtown arena of the Phoenix Suns and Mercury.

The decision to cancel the 2020 tournament crushed organizers.

“We cried. We had tears when we had to cancel because we know how important the event is to the kids,” said GinaMarie Scarpa, founder and president of the NABI Foundation, which formed in 2002 to organize the event. “And then, of course, news stories started coming out about the cancellation and how devastating it was to our tribal youth across the country.”

It is another blow to a community that has been disproportionately impacted by the coronavirus. The Center for Disease Control and Prevention reports that Native Americans are 5.3 times more likely than the white community to be hospitalized due to COVID-19.

The NABI is considered the premier basketball tournament for indigenous youth, and was the first to become certified by the NCAA (2007), according to the organization’s website.

While basketball brings the athletes – boys and girls ages 14 to 19 – together for the tournament, the NABI Foundation’s ultimate goal is to teach athletes the importance of education and provide opportunities through scholarships and the educational seminars. The program has provided more than $250,000 in scholarships.

During the invitational, NABI hosts a college and career fair. College scouts are on hand, and a training camp is offered. High school teams that participate can bring one freshman player for a free training camp and an educational youth seminar with guest speakers, who are often tournament alumni.

“We expanded our educational seminar to a full-blown educational youth summit,” Scarpa said. “We had 36 presentations in 2019. We had great speakers. So they really come to learn and we use basketball as a tool.”

While there is hope that the pandemic will be under control by July, the NABI is planning ahead in case it is still a threat. A Native American youth summit will be held online and organizers will strictly follow protocols recommended by the CDC and the state of Arizona.

“The NABI Foundation will continue to monitor the situation and amend the program according to imposed safety guidelines closer to the program dates. A full schedule of events will be released mid-June,” said Lynette Lewis, Director of Basketball Operations & Program Development, in the statement released by the NABI when the return of the event was announced.

The cancellation of the June Native American Basketball Invitational was a blow to a community that benefited from the event thanks to scholarships and exposure. (File photo by Nate Fain/Cronkite News)

One of the organization’s board members will play an important role in preparations.

“We have a wonderful kind of diverse board of directors, and one of our board of directors just happens to be one of the owners of a PPE (personal protective equipment) company,” Scarpa said. “So, he’s committed to providing everything we need for all the gyms, all the kids. I really think we will bring it back to normal.”

“I think if we do allow a big sporting event, it might be limited seating … masks are going to be mandatory, there will be sanitizing stations. We are going to do everything possible to keep our kids safe.”

While the tournament didn’t happen last summer, organizers were still at work. One avenue for raising funds at the tournament is the sale of merchandise during the event, and there are now plans to make items available beyond tournament week.

“Usually we’re like, ‘Nope, you have to buy it this week and then it’s done.'” Scarpa said. “And so, we are now in talks with another big sporting company who wants to take the NABI line nationally and online.

“Not only will it be sold at NABI during NABI week, but it will be sold all year around. We’ll have designers (and) have access to the graphic designers in their marketing department – all that fun stuff that goes with it – and also producing our own native theme for the uniforms for the teams.”

The NABI Foundation and tournament were started in 2002 by Mark West, the former Suns center and current team vice-president for player programs; Scarpa, who is the former executive director of the charitable foundation of another former Suns player, A.C. Green; and the late Scott Podleski, the former ticket director of the Arizona Rattlers who passed away from cancer in 2010.

Their enthusiasm for the project has carried on, and drives organizers still.

“I think it’s just the passion, and it’s my staff that shares that passion,” Scarpa said. “They love it. They love working with the kids. They love to see the outcome.”

Now with the NABI tournament set to return in 2021, Scarpa is hoping the event will continue to serve its purpose for years to come, providing educational opportunities for young Native American athletes as well as indigenous hoopers from Canada and beyond.

“It’s really the backbone portion of it, to load them up with opportunities” Scarpa said. “The goal is (when they) leave NABI and NABI week, they’re really thinking seriously about a higher educational plan for their lives.”