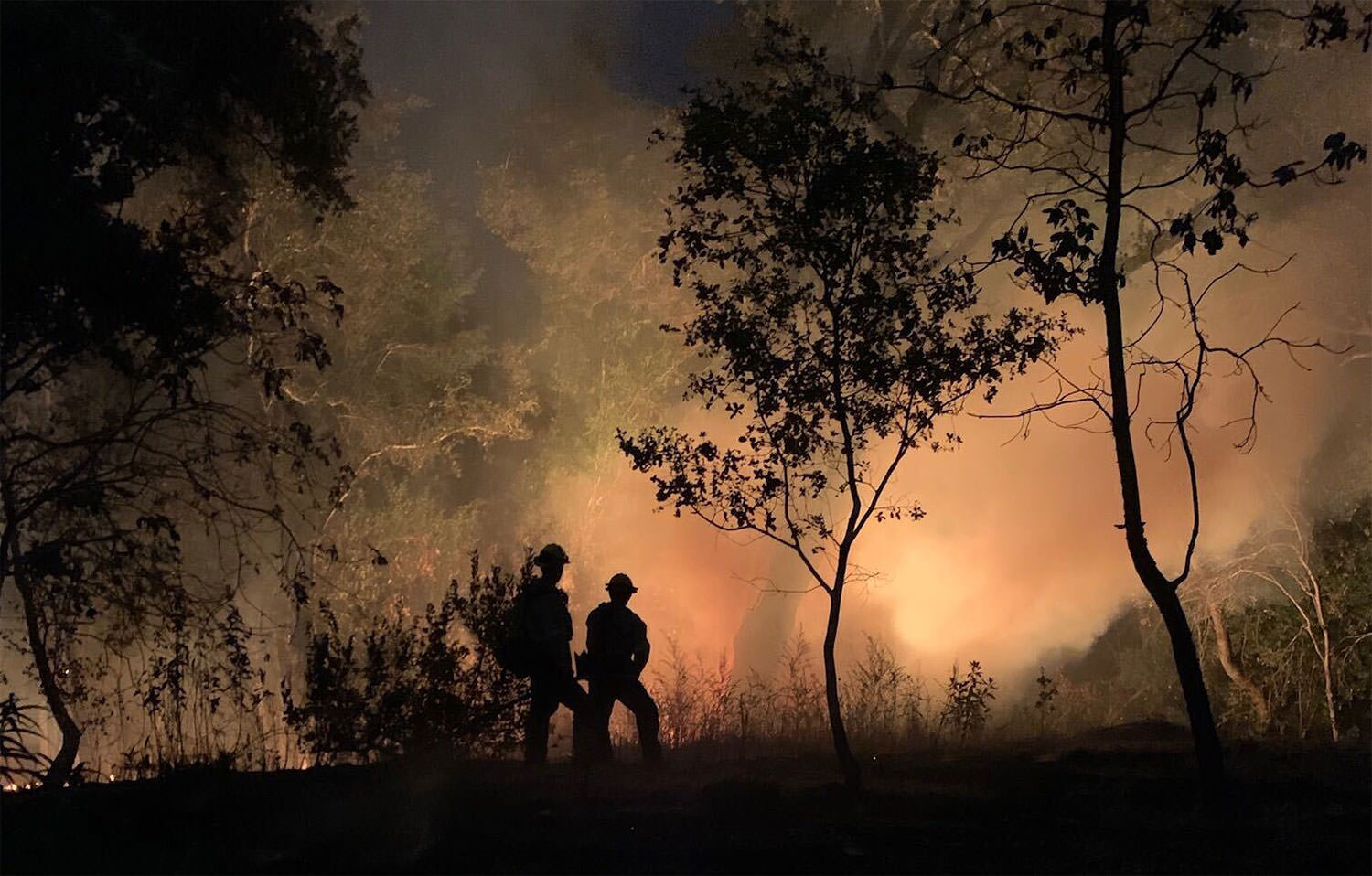 As fires continue burning into the record book, California growers – whose operations are federally illegal and therefore difficult to insure – are demanding protections for their billion dollar industry.

Cannabis farms, as well as wineries, agricultural farms, have been hard hit by the wide range of California fires, and the toll faced by cannabis farms is among the worst.

Since January, California has had more than 9,177 wildfires burning more than 4.1 million acres, which is more than double the old record in 2018, according to Cal Fire.

High in the hills overlooking the Russian River Valley in Sonoma County, Kila Peterson and her daughter, Keala Peterson, are partners on Sweet Creek Farm, a small family-owned and licensed cannabis farm that also grows avocados and sweet bananas.

The cannabis venture started more than 10 years ago when Kila began growing it to produce CBD for her father, who had cancer. The mother-daughter approach is rooted in sustainability; their techniques include a solar-powered irrigation system fed by rainwater catchment and pollinator-friendly companion flowers, according to the farm’s website.

The Petersons continue to produce for recreational dispensaries, which were legalized in 2016. California’s Proposition 64, which was approved by 57.13% of votes, allows adults 21 or older, with certain restrictions, to legally grow, possess and use cannabis for non-medicinal purposes in the state. Federal law, however, outlaws the possession, purchase and sale of marijuana.

Sweet Creek Farm was badly damaged by the Walbridge Fire in August, destroying 70% of its entire crop. The loss, estimated at $150,000, wasn’t insured.

For the past three years, the farm has worked on fire prevention, but it wasn’t enough this summer.

“The damage was very severe, and we have a multigenerational family compound, and we lost one of our houses,” Kila Peterson said. 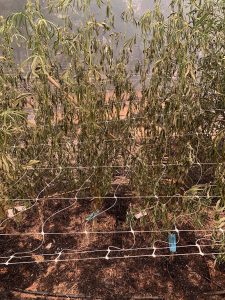 These wilted cannabis plants still bear California Metrc tags, which are a part of the state’s track-and-trace system to monitor commercial cannabis activity across the distribution chain. (Photo courtesy of Ivan Redus)

The farm suffered from the fires in August but was spared from the flames of the most recent fires in Northern California, which largely affected wineries. But smoke from those ongoing fires still could affect Sweet Creek Farm’s cannabis. Smoke contains a cocktail of chemicals, which could lead to cannabis absorbing lead or other harmful chemicals, Peterson said.

State certified testing labs are available for cannabis farmers, Peterson said, and they aren’t as backed up as testing facilities for winemakers trying to determine whether their grapes are smoke tainted. Sweet Creek Farm had its product tested by a certified lab, which found it clean of pesticides and heavy metals, she said.

California Cannabis Testing Labs and other labs comply with regulations for inhalable cannabis and other cannabis products. Services entail seven analyses and screenings: potency analysis, terpene analysis, residual solvent analysis, category I & II residual pesticide analysis, microbial screening, mycotoxin analysis and heavy metal analysis. The state’s Bureau of Cannabis Control provides a text of regulations that must be met when testing for quality standards. Cannabis that doesn’t pass these tests is thrown out unless remediation is possible.

Proximity to fire and smoke can determine the damage done to the crop. Ash can carry heavy metals, which cannabis growers remove by manually blowing it off, which may not be enough if the plant has started flowering, or washing the flowering buds, which may remove more ash, according to SF Evergreen, a San Francisco marijuana and cannabis news publication.

Although the tested product with salvageable damage would not be considered a premium smokable flower, Peterson said, it still can be used by extracting the oils and sold as a discounted bulk mass. Flower refers to the smokable section of a female cannabis plant, which is popular because it can be smoked in a variety of ways.

The challenges growers face are unlikely to affect consumers but could be disastrous to the businesses that supply growers, industry insiders told the San Francisco Chronicle. 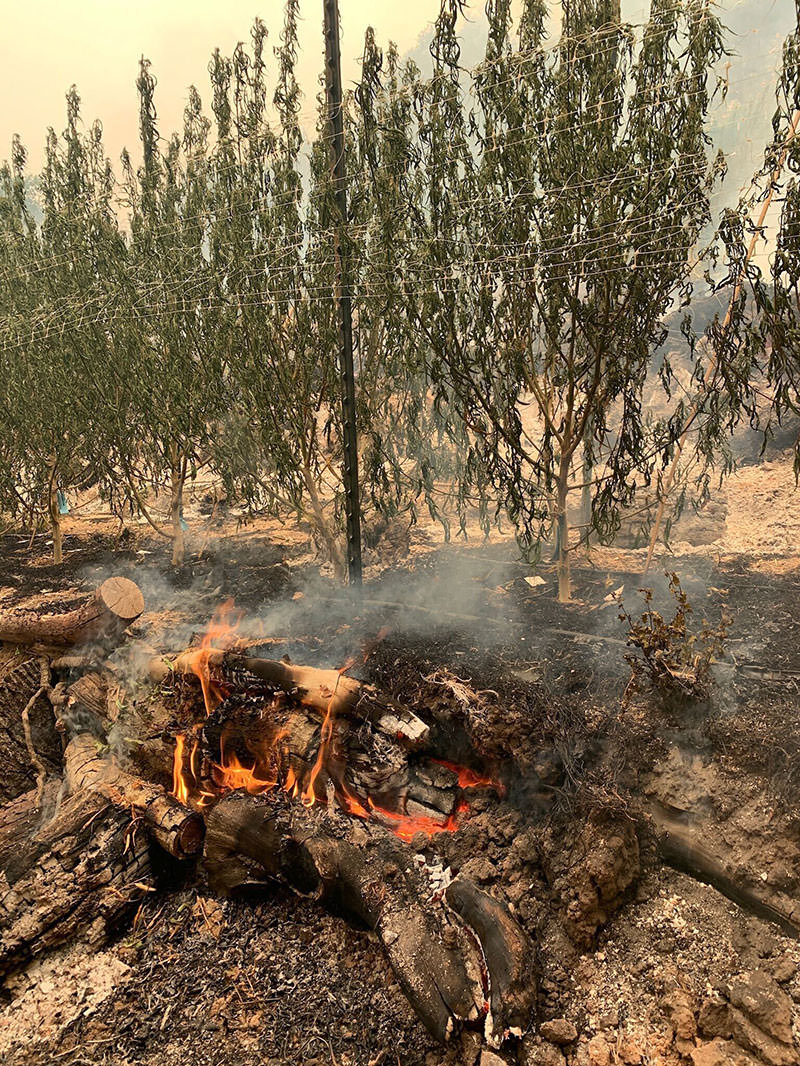 Cannabis plants are singed as fire smolders in a wooden retaining wall. 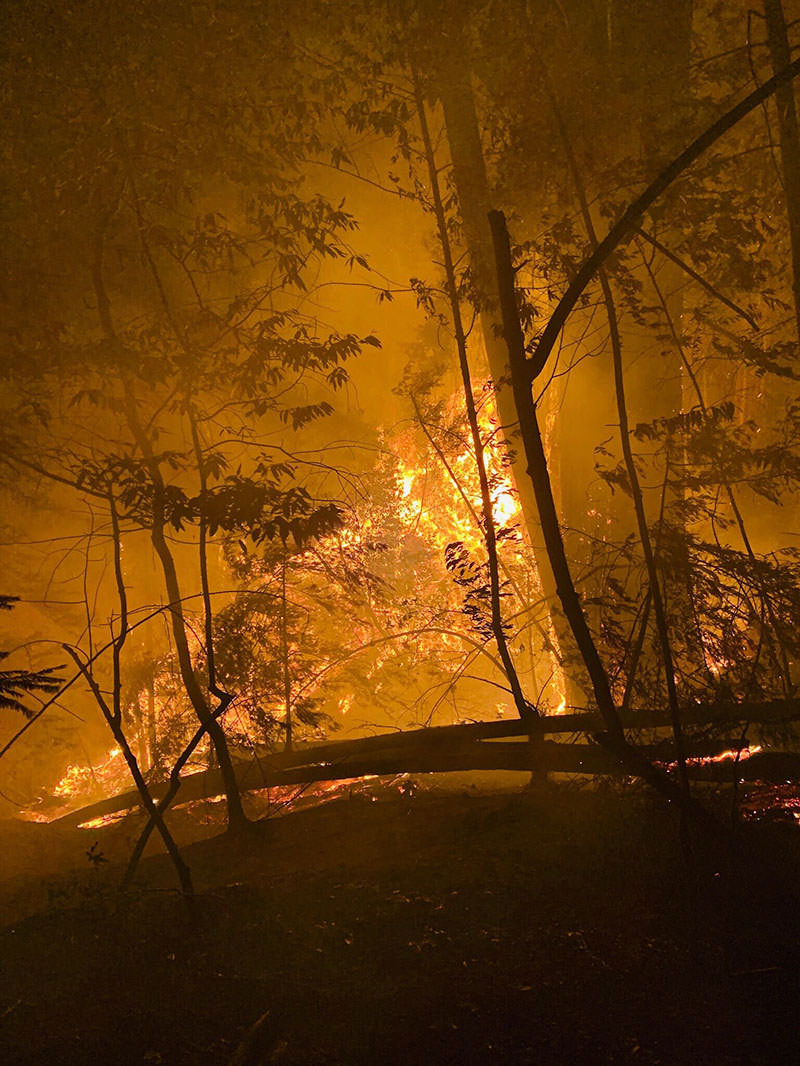 The Walbridge Fire in Sonoma County burns through the underbrush in August, scorching a redwood tree. (Photos courtesy of Ivan Redus)

Left: Cannabis plants are singed as fire smolders in a wooden retaining wall. Right: The Walbridge Fire in Sonoma County burns through the underbrush in August, scorching a redwood tree. (Photos courtesy of Ivan Redus)

North of Sonoma County lies what’s known as the Emerald Triangle, a trio of counties – Humboldt, Mendocino and Trinity – that produce more cannabis than any other place in the United States.

Kristin Nevedal, whose husband owns a cannabis farm in southern Humboldt County, said the effect the fires have had on California cannabis growers isn’t fully known. Some farms have burned to the ground, others have survived relatively unscathed but are monitoring the flames and smoke.

Nevedal, who is a co-chair of the California Cannabis Industry Association’s Agriculture & Manufacturing Committee, said most farms in her county that are exposed to the smoke are just starting to harvest.

Covering plants, storing water and supplementing light are a few of the ways to protect the crop, Nevedal said, being prepared for natural disasters is a way to combat damage and continue growth.

The hard reality for many farmers, she said, is having money invested into licensing and compliance but not having crop insurance and access to banking services. A lot of farmers depend solely on the summer harvest for the entire year, and if they lose this crop they might not have the money for next year’s license and permits to plant.

Many cannabis growers in California have made the case for insurance, especially because natural disasters like wildfires put their operations at great risk. 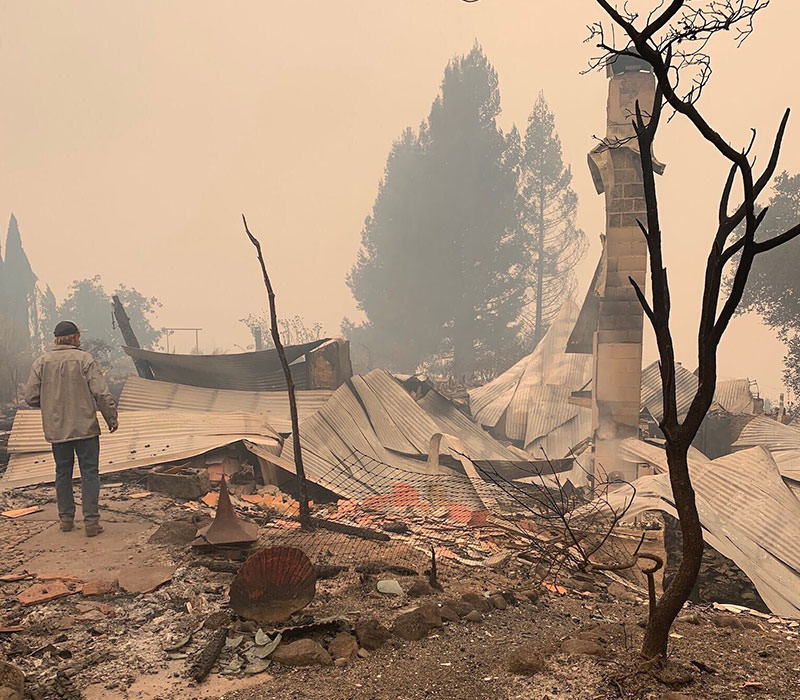 The smoldering remains of Kila and Arne Peterson’s house, the day after it burned to the ground in August. Their Sweet Creek Farm lost 70% of its cannabis crop, an uninsured loss of $150,000. (Photo courtesy of Ivan Redus)

Hemp, which has 0.3% or less THC, whereas marijuana has more than 0.3% THC, was legalized by the 2018 farm bill, qualifying it for federal crop insurance. However, the federal program is expensive, according to Politico, and only 5% of the hemp crops in the country are insured under it. Unless hemp crop insurance is heavily subsidized, growers usually skip the expense, Politico said.

Cannabis has proven its worth in California. In the fourth quarter of 2019, the crop generated a total tax revenue of $172.7 million. The total program revenue, since January 2018, is $1.03 billion, which includes $498.1 million in cannabis excise tax, $123.4 million in cultivation tax, and $403.1 million in sales tax, according to the California Department of Tax and Fee Administration. 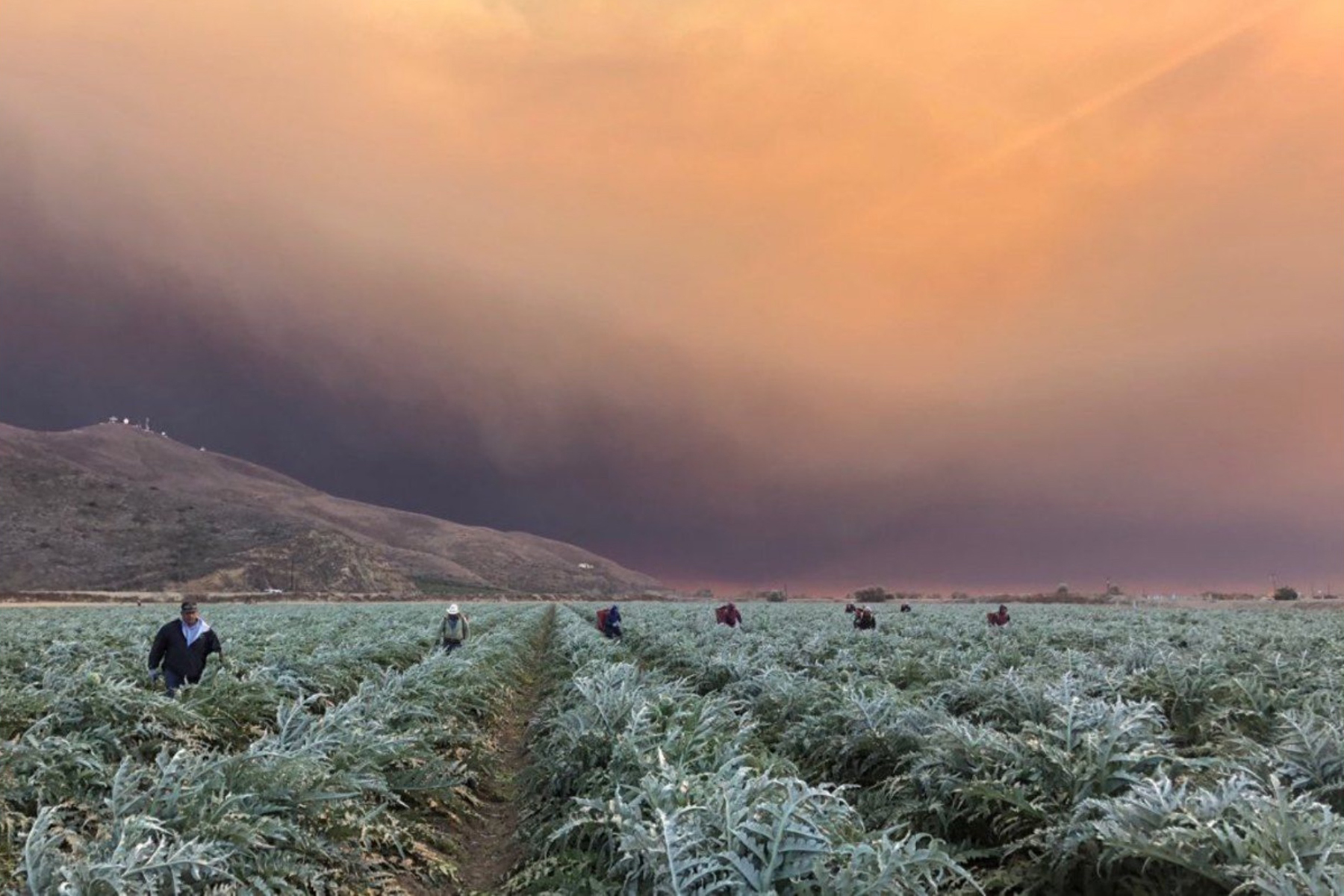 Nearly 60% of Arizona voters approved Proposition 207, the Marijuana Legalization Initiative, which will allow adults 21 or older, to smoke legally, with restrictions. In addition, anyone arrested for, charged with or convicted of less serious marijuana-related offenses will have the right to petition to have their criminal records expunged beginning July 21.

Many details have yet to be announced and no date has been set for the law to take effect, but dispensaries could begin the process of applying for a license to grow and sell marijuana as soon as January, according to ABC15 Arizona.

The law enacts a surtax on marijuana sales and requires the development of rules to regulate marijuana businesses.

In addition, President-elect Joe Biden has stated his support for adult-use marijuana decriminalization, federal medicinal legalization and other reforms.

Nevedal, the Humboldt County grower, said federal legalization of cannabis production and use would mean access to banking and the expansion of insurance opportunities. Many COVID-19 relief programs denied cannabis farms access to the Paycheck Protection Program and low interest short term loans available under the $2 trillion CARES Act passed by Congress in March.

“Federally legal opportunity for cannabis opens up those sort of banking relief programs, and grants that might be available for disaster relief,” she said.