‘Not sure I could have dreamt that any better’: Elliott wins Cup Series Championship 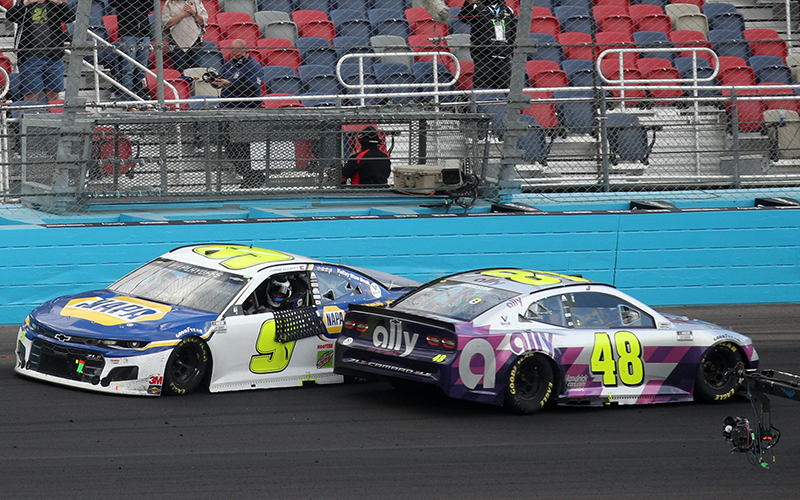 Fan-favorite Chase Elliott (left) became a NASCAR Cup Series Champion for the first time at Phoenix Raceway. He received congratulations from Jimmie Johnson and the moment symbolized the passing of the torch at Hendrick Motorsports. (Photo by Chris Graythen/Getty Images)

AVONDALE – It was a significant day in the racing world, as fan-favorite Chase Elliott became a NASCAR Cup Series Champion for the first time at Phoenix Raceway. In just his fifth full-time season, the 24-year-old became the youngest driver to achieve the prestigious honor since the legend he took over for, Jeff Gordon, in 1995.

Initially primed to start first in Sunday’s Season Finale 500, Elliott was met with adversity before the drop of the green flag, when his car failed pre-race inspection twice, forcing him to start from the rear of the field. While this may have made the task at hand more difficult, overcoming it wasn’t unheard of in NASCAR’s storied history.
In fact, Elliott’s teammate, Jimmie Johnson, not only secured his legendary seventh Championship in this fashion in 2016, but he won the race as well.

“That’s what went through my mind today when I heard they were going to the back,” Johnson told Cronkite News. “I sent Alan (Gustafson, crew chief) and Chase a text and reminded them that I won a championship that way. Of the championships I’ve won coming from the back, I had less nervous energy in my body when I took the green flag and it was very easy what I needed to do.”

“I shared that with him, and he smiled and he said, ‘I hope that’s how it goes today.’ And it did.”

Not only would Elliott win the title, but he would also do so dominantly. After surging into the Top 10 by the time the competition caution flew on Lap 30, he capped off his day in the desert by leading a race-high 153 laps en route to a victory at Phoenix — a place that’s eluded him in his young Cup career.

What made this day even more special was that it marked the final race before Johnson’s departure from NASCAR. Elliott’s No. 9 was dressed in neon yellow to honor the legacy of his teammate and friend.

To add more emotion into the mix, Johnson closed out his full-time NASCAR career with a top-five finish and one of his most competitive showings in 2020. He was also the highest scored non-title contender of the race.

At the event’s conclusion, Elliott and Johnson met at the start/finish line in their Chevy Camaros and shared a moment of elation while driving door-to-door and shouting endlessly. Upon exiting their vehicles, they were embraced in an emotional group hug by team owner Rick Hendrick, who hadn’t seen either of the drivers since COVID-19 began.

By all accounts, this felt like a passing of the torch from one generation to another. The term “storybook-esque” is thrown around loosely, but this moment felt like a near-perfect definition. 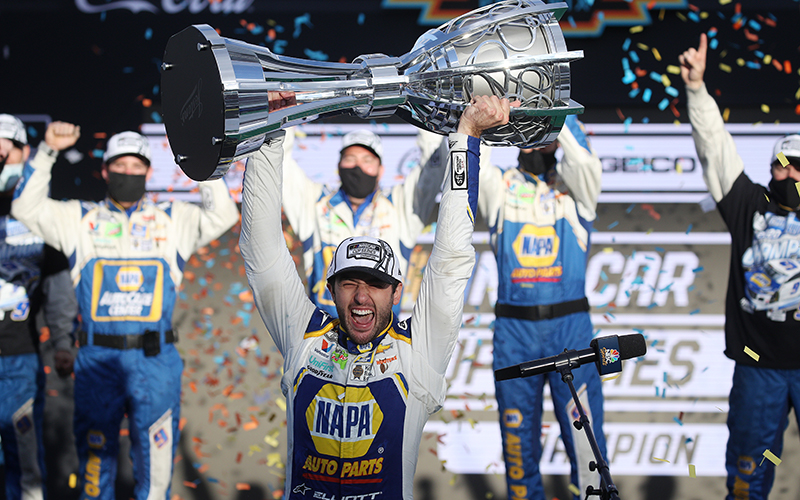 Fan-favorite Chase Elliott became a NASCAR Cup Series Champion for the first time at Phoenix Raceway, and did it in dominating fashion. (Photo by Chris Graythen/Getty Images)

“Today I feel like symbolized a lot of great things, and I feel like there’s a lot of things from today I’ll look back on in a week or a month or a year, and I’ll be like, ‘dang, that was really cool,'” Elliott told Cronkite News. “Jimmie and I have shared some really cool moments on track, and they’ve been in really big moments of my career. The moment we shared after Watkins Glen, the road to that first win. And then for the greatest of all time to be kind of hanging it up today and to win a championship on that day, I mean, that’s just a really cool thing.

“As a fan of his, number one, and as a person that’s looked up to Jimmie in many ways over the years, I’m not sure I could have dreamt that any better.”

Elliott wasn’t the only first-time Champion in the Valley of the Sun. His crew chief Alan Gustafson captured glory after 16 years of hard work and dedication at Hendrick Motorsports. The 45-year-old came close on numerous occasions, working alongside Hall of Famers Gordon and Mark Martin, but it was the racing prodigy that took him to the promised lands.

Since joining forces with Elliott in 2016, Gustafson has been fortunate enough to witness the growth process of a superstar in the making. He saw a noticeable change in his young driver the previous weekend when Elliott led a race-high 236 laps at Martinsville Speedway and won.

“I think I’m his biggest fan,” Gustafson said. “His abilities, his intelligence, the quality person he is, he’s top-notch all the way around. I think just going through those situations and succeeding gives you some confidence to not be indecisive and not second-guess yourself and not let doubt creep in when you get into a situation that’s not ideal.”

“When you go through races that are must-wins and championship moments like this, no matter if you do everything perfect, you’re still going to have some adversity to overcome. I think him being able to win in those moments has given him some confidence to know that he’s certainly good enough to do it. We all know that, and you can hear it, but until you do it, you just don’t know that.”

“I think that now it’s given him that reassurance.”

Elliott became the first driver to win the Most Popular Driver awards and the Cup Championship since his father, Bill, did it in 1988. His victory in the series finale at Phoenix Raceway extended his single-season win total to five, capping off a career-defining year.

At 24, Elliott is just getting started in his period of dominance. There’s no telling the potential for success the driver of the No. 9 has, but this could very well be the beginning of a new era in Hendrick Motorsports and NASCAR.