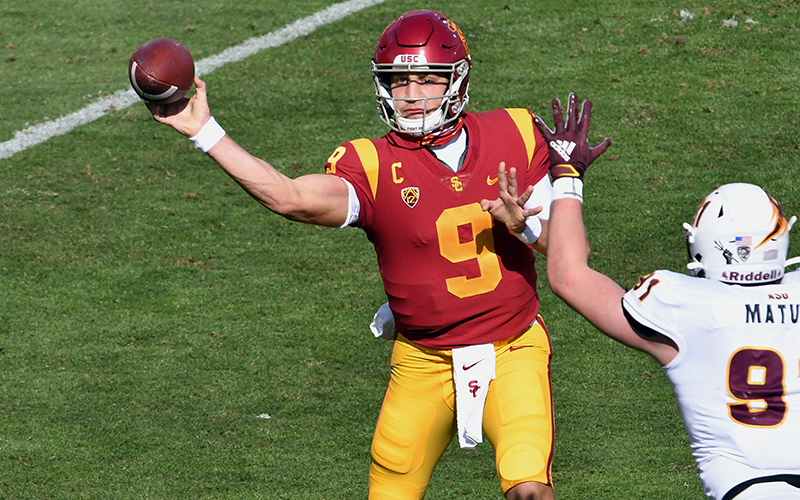 Talent such as USC quarterback Kedon Slovis is the reason the Trojans were able to rally and beat Arizona State. (Photo by John Cordes/Icon Sportswire via Getty Images)

PHOENIX – The name of the game in college football is recruiting.

When players can choose where to play instead of teams selecting them in a draft, talent accumulation is the most important component to having a team that can hang with the best in the country.

Arizona State is not there yet. It’s getting there. But a four-minute stretch in the fourth quarter showed how far the Sun Devils have to go.
Trailing 27-14, USC drove 80 yards in 1 minute and 36 seconds of game time, moving the ball exclusively via the arm of Kedon Slovis, he of Scottsdale’s Desert Mountain High School. Five-star receivers Amon-Ra St. Brown and Tyler Vaughns consistently won their one-on-one matchups against ASU’s admittedly depleted secondary.

After a successful onside kick, they ran it back: 1:29, six plays, 55 yards, a Drake London touchdown. ASU lost its lead.

When you have the talent USC does, you can win a game you’ve been outplayed in for 56 minutes with a flurry in the last four.

“They’ve got some talented players over there, have a very talented quarterback,” coach Herm Edwards said. “And they were able to make the plays. And that was the game really.”

That’s recruiting, and that’s the level Edwards and ASU are trying to reach.

ASU quarterback Jayden Daniels and Slovis have been intertwined since they flipped states to play college football, and both had success starting as true freshmen. But their first meeting on the field was delayed a year by Daniels’ injury in 2019. 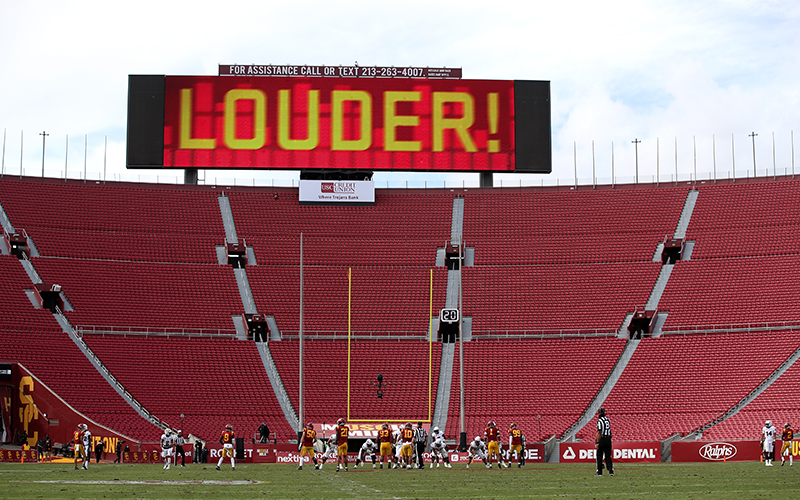 The Trojans and Sun Devils played in an empty Coliseum because of the COVID-19 pandemic.(Photo by Sean M. Haffey/Getty Images)

Slovis, in offensive coordinator Graham Harrell’s pass-heavy Air Raid attack, threw for 381 yards in the 2020 edition. However, the ASU defense consistently forced him to nickel and dime his way down the field, dropping into zones and coming up to tackle after numerous short completions.

But on the final two drives of the game, Slovis began to connect down the field, starting with a 35-yard completion to St. Brown. He later hit Bru McCoy for a 26-yard tipped-ball touchdown and Drake London for the 21-yard game-winning score.

Edwards, a former defensive back, thought the Sun Devils put themselves in a good position to defend all three plays but simply did not execute.

“We got one tipped ball in the end zone, and we tip it in the air, they catch it,” he said. “The last touchdown, we’re in pretty good coverage, and we don’t make the play. We’re positioned to make the play, and we did not do that.”

Daniels, meanwhile, received limited help from his young receiving corps. Freshman Johnny Wilson had a number of dropped targets, and with senior Frank Darby out with an injury, there was a vacuum left unfilled of receivers who could separate from coverage.

“Without Frank, we really have no experience as a receiver group of people that have actually played,” Daniels said.

The longest pass play of the day came from a running back, Rachaad White, who caught a pass out of the backfield and took it 55 yards for a score. The other four Sun Devils who caught a pass combined for 64 yards total.

“Them being young, that’s not an excuse,” Daniels said. “We just gotta execute at the end of the day.”

He later elaborated on how the magnitude of the game played a role in the young receivers’ skittishness.

“Going into it, it’s your first game, it’s actually a big game. They weren’t blessed enough to go in and go play like a NAU(-type team), get the little warm-up games,” Daniels said. “So it’s a big game. I sensed the nerves. It’s an important game, so I expected it. But at the end of the day, it’s just playing football.”

ASU had the ball up 24-14 in the fourth quarter. Having driven the ball from their own 8-yard line to USC’s 21, the Sun Devils faced a third-and-2. Their defense had come up big in these situations. Now it was the offense’s turn.

Running backs Chip Trayanum and White and Daniels had already logged carries of 16, 15 and 13 yards on the drive.

But much like ASU’s defense had, USC bowed its neck and tackled Trayanum 2 yards behind the line of scrimmage, setting up fourth-and-4. Edwards elected to send in Christian Zendejas to attempt a 41-yard field goal.

Zendejas nailed the kick, but failing to convert took some wind out of ASU’s sails. A conversion, touchdown and successful extra point would have widened the deficit to 31-14, a three-score advantage.

Zendejas FG makes it 27-14. Impressive rushing effort on that drive by ASU, but it feels like a TD could have put the game away. Up to the defense now

Because the knockout blow never came to put the game away, USC’s path to victory opened a sliver. Slovis and company did the rest.

“It was kind of a choppy game at the end,” ASU offensive coordinator Zak Hill said. “Just being able to finish really. We didn’t finish the way we wanted to with the run game and weren’t clicking with some of the throws.

“We were in a good spot. We just lost momentum and then yeah, shoot, it was a tough one.”