Arizona’s football opener against Utah canceled due to COVID-19 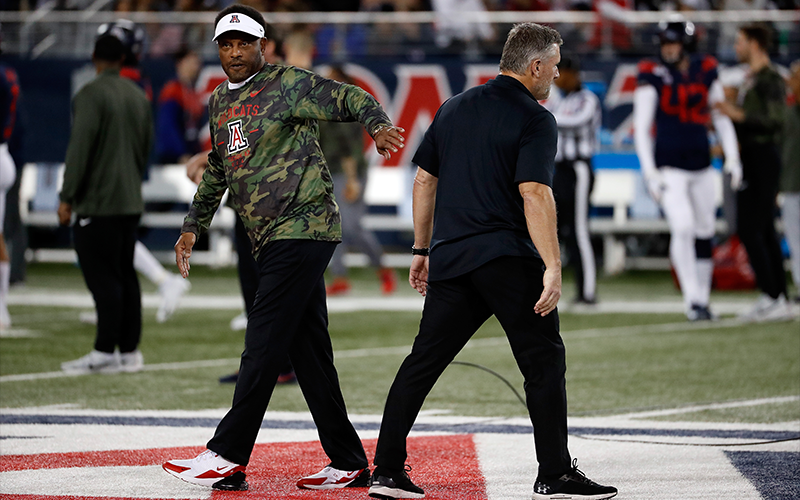 Arizona Wildcats coach Kevin Sumlin (left) and Utah Utes coach Kyle Whittingham have to walk away from playing each other Saturday after their game was canceled because of a COVID-19 outbreak. (Photo by Chris Coduto/Icon Sportswire via Getty Images)

Arizona’s season-opening football game against Utah has been canceled, the Pac-12 announced Friday.

The decision to cancel Saturday’s game came after positive COVID-19 tests on Utah’s roster forced them below the required number of available scholarship players, according to a Pac-12 statement.

It is the second Pac-12 game to be canceled in as many days. Washington and California will not play this weekend after contact tracing forced many Cal players into quarantine.

According to Pac-12 rules, both games will be declared no contests. 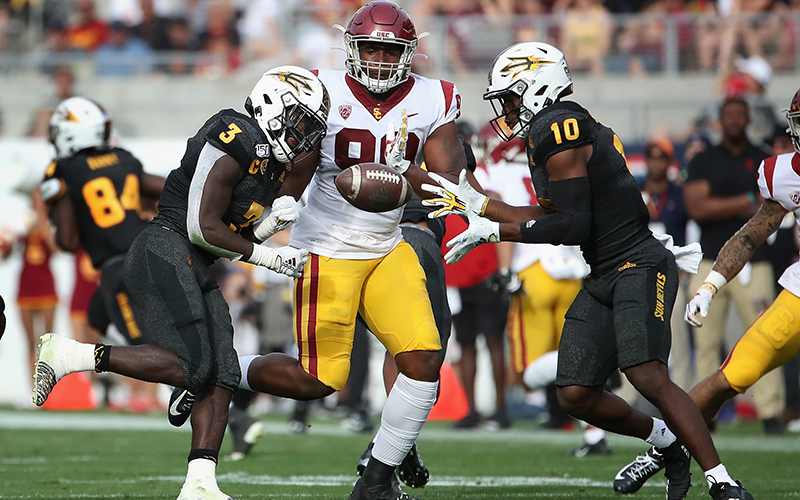 “The cancellation of this game, following yesterday’s cancellation of the Washington at Cal football game, is of course incredibly disappointing to our student-athletes and our fans,” the Pac-12 statement said. “While all of us want to see our football student-athletes on the field competing, our number one priority must continue to be the health and safety of all those connected to Pac-12 programs.”

The statement added that Utah requested the cancelation after COVID-19 protocols left them without the required 53 scholarship players.

“Over the last 24 hours, the University of Utah Department of Athletics has been informed of a number of positive COVID-19 cases among student-athletes within the football program,” Utah said in a statement Friday.

“Arizona Athletics respects the Pac-12’s Conference’s approval of Utah’s request to cancel our football game in Salt Lake City in accordance with the Pac-12’s game cancellation policy,” Arizona Athletic Director Dave Heeke said in a statement Friday. “I could not be more disappointed that our players, coaches and staff will be unable to experience game day, which they have prepared months for.

“With that said, health and safety must continue to be our guiding principles throughout these uncertain times.”

While Utah requested the cancellation, neither Washington nor Cal was expecting their game to be taken off the board.

According to Pac-12 insider Jon Wilner of The Mercury News, the Golden Bears had one positive test on their roster, but in accordance with guidelines established by local officials in the Bay Area, the entire defensive line was placed in quarantine.

If local contact-tracing rules continue to apply, Cal’s game against Arizona State next week could be in jeopardy. Theoretically, the quarantined players will be unable to play for two weeks, according to Wilner.

Wilner also reported earlier Friday that the Pac-12 was open to using week seven of the season to make up cancellations.

Important #Pac12 update: Conference tells the Hotline that Week Seven won't necessarily be used for cross-division games – could be held for makeups pic.twitter.com/glFS4XwxK8

The Pac-12 set the 53-man requirement in September when it announced its return to play. With two games already canceled before the season’s start, the Pac-12’s policies, combined with strict protocols in many areas called home by Pac-12 schools, are proving to be steep obstacles for the Pac-12 to complete this pandemic-shortened season.