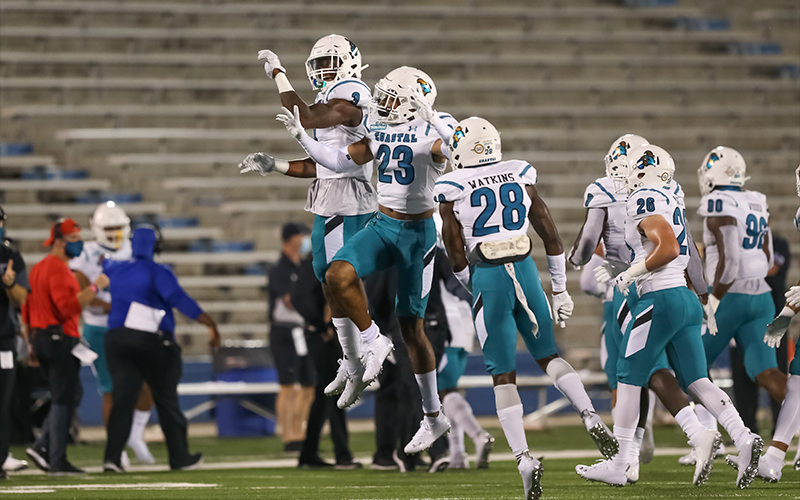 Coastal Carolina cornerback Derick Bush (23) is one of two Arizonans enjoying the experience of playing for one of college football’s hottest teams. (Photo by Scott Winters/Icon Sportswire via Getty Images)

More than 2,000 miles separate the desertous areas of Phoenix and Tucson and the humid South Carolina coast.

However, for Arizona natives Derick Bush and CJ Schrimpf, the long trip has been well worth it. After starring for local high schools and junior colleges, the two moved to Conway, South Carolina, to play football at Coastal Carolina University, a school that is probably best known in Arizona for beating UArizona baseball in the 2016 College World Series.

Until this year, the football program there was not best known for its play, but rather its trademark teal-colored field turf that was installed in 2015. 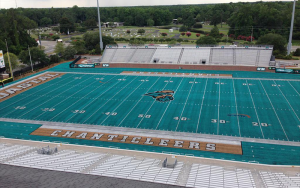 The Chanticleers, or Chants for short, made the jump to FBS play in 2017, one year before Bush, a cornerback, and Schrimpf, a long snapper, arrived in Conway.

A few years later, the Chants have taken advantage of unique circumstances in 2020 to become one of the most-followed stories of the season.

Coastal Carolina (6-0) was nationally ranked in the FBS for the first time in school history earlier this year and currently sits at number 15 in the AP Poll, the highest ranking in the history of the Sun Belt Conference. 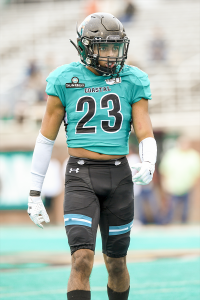 “It’s been a heck of a ride,” Coastal Carolina coach Jamey Chadwell said. “Our guys knew, even through some of the years when we were struggling, that something good was happening.”

Coastal’s success has been fairly surprising, but it may be even more surprising that a pair of former Arizona standouts have been important parts of that success.

After playing at Salpointe Catholic High School in Tucson, Bush mostly had offers from smaller FCS programs. However, the Chants came calling thanks to an unlikely connection.

According to Bush, a Salpointe alumnus working for Coastal Carolina got his film into the hands of the Chants’ decision-makers. The rest was history.

“My only official visit was Coastal,” Bush said. “I committed after that because I wanted to play football at the highest level, and I was happy with my visit. Coming out of high school, I was pretty excited to get down here.”

According to Chadwell, Bush’s transition from west to east wasn’t the smoothest.

“He ended up playing a little bit as a freshman and played some last year,” Chadwell said. “(He was) immature, to be honest with you, when he got here. Away from home, it was a struggle for him on the other side of the country. This year, he’s made a 180, just from his mindset and his preparation.

“He’s playing as well as anybody on our defensive team in the secondary. He’s exceeded our expectations and he’s playing at a really high level right now.”

This season, Bush has five pass deflections, and he intercepted a pass in the Chants’ season-opening win against Kansas. Chadwell added that Bush has been “Mr. Lockdown” in 2020 and typically matches up with the opponent’s best receiver.

While Bush left the desert for Coastal Carolina straight out of high school, Schrimpf’s journey to Conway was less direct.

Schrimpf attended high school at Corona del Sol in Tempe, and instead of going straight to a four-year school, he went to Phoenix College and played two seasons for the Bears before making the move to South Carolina.

“He’s one of my all-time favorite players,” said Robin Pflugrad, who coached Schrimpf at Phoenix and is currently the associate head coach at Northern Arizona. “He is fun, full of energy, charismatic, loyal and hard-working. He honed his skills, just like a quarterback would. I’m so happy for him and proud of him that he got this opportunity.”

While junior college gave Schrimpf the opportunity to improve his playing ability, playing at that level presented many other challenges.

“Juco is weird because you have your teammates, but at the same time, everyone’s trying to get film because we all want the same thing – to get to the next level,” Schrimpf said. “Budgets are real low. We had Under Armour pants and Adidas jerseys… A whole lot of it is just different than what you get at the Division I level.” 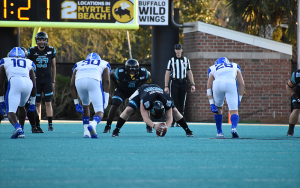 Pflugrad compared the challenges faced at Phoenix College to those documented in the Netflix series “Last Chance U.”

“There’s no way in God’s creation that (“Last Chance U”) should not have been filmed at Phoenix College,” Pflugrad said. “We inherited a 0-52 or 0-53 record. If the viewers had seen what we did not have, and to turn that thing around and get some guys moved on to four-year schools, and winning a few games with what we had to work with, nobody would have missed an episode.”

After graduating from Phoenix, Schrimpf said he sent emails to schools across the country at various levels, and that he accepted an offer to join the Chants as a preferred walk-on after they saw his tape.

After redshirting in his first season, Schrimpf won the starting job at long snapper and earned a full scholarship. As a redshirt senior, 2020 will likely be his last year in college football.

“He’s been Mr. Reliable the last couple years snapping for us,” Chadwell said. “On our PATs, field goals and punts he’s been awesome.”

It’s safe to say that despite the distance and early feelings of homesickness, the pair have made themselves at home in South Carolina. Bush’s contributions are well-known, and Schrimpf has been one of the driving forces behind this year’s high-energy Coastal Carolina team.

“The one thing I can control, other than keeping my snaps good and making sure I’m doing everything I can on the field, is how much energy I bring,” Schrimpf said. “My biggest thing is just being an Energizer bunny. I know how blessed I am to be here, so I’m not going to take any of that for granted.

“I’m going to dance when I hear some music. I’m going to cheer along and stuff like that. Winning is fun and winning is hard, so I’m doing whatever I can even off the field to keep the sidelines fired up, and anything I can do to help the team out, I’m going to do it.”

Schrimpf also gained attention for a trend he helped start. After growing a mullet earlier this spring, COVID-19 left him without a place to get a haircut. As the team started to win more and more, more players decided to jump on board.

“By the time we were able to come back for summer workouts, we already had about six or seven people that had a mullet,” Schrimpf said. “It just took off from there. Once we started winning, mullets started going crazy on social media and stuff like that. We’re probably up to about 20 mullets on the team now, or more.”

Whether it’s Schrimpf’s humorous energy, or Bush’s coverage skills, the state of Arizona has certainly left its mark on this year’s Coastal Carolina team. Chadwell said that the West Coast presence on the team, combined with winning, will open new doors for recruiting in the future.

“We’d love to have some guys from (the West Coast),” Chadwell said. “The issue we’ve had is that most of them haven’t heard of us. When we talk about Coastal Carolina, coming out to the East Coast, they’ve got a lot of other people talking out there, for them. Now, I think more of them are learning about us and who we are, and what our program is about. That’s been a benefit of having the type of season that we’re having.”