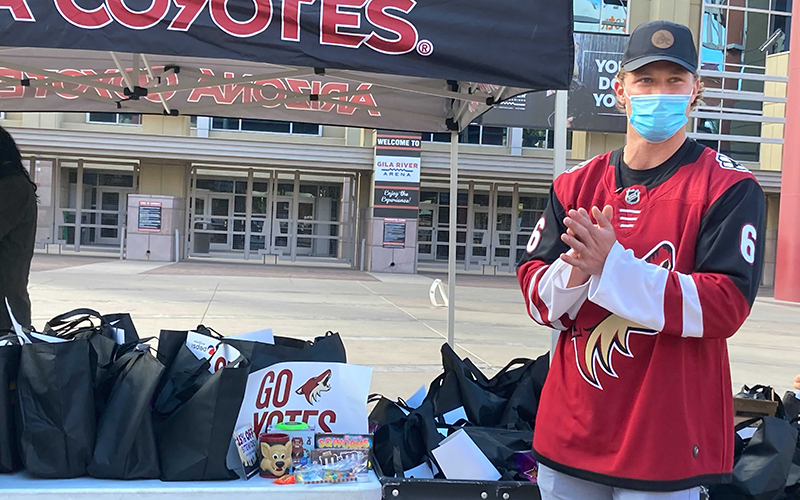 GLENDALE – Trick-or-Treat? It was more like “Chych”-or-Treat near Gila River Arena Saturday morning.

Arizona Coyotes defenseman Jakob Chychrun joined in on the Coyotes “Howl-O-Ween” celebration of Halloween, handing out goodies during a drive-thru event designed to let fans have some fun while remaining safe during a pandemic.

Turned out the day was a thriller for more than the fans.

“I was looking forward to this,” Chychrun said. “We’ve missed our fans very much. It’s been a long time since we had any interaction with them, and Halloween is also a fun holiday. So it was nice to hand out some candy and mingle a little bit.”

Chychrun, who wore a mask and protective gloves, helped the Arizona Coyotes Foundation distribute treats and greet children as hundreds of cars passed through during the two-hour event.

Only half as many U.S. households (12 percent versus 24 percent) planned to trick-or-treat this Halloween season compared to last year, according to a survey by NORC at the University of Chicago. Additionally, one in four families (25 percent) planned to give out candy, down from 38 percent.

On the day before Halloween, the U.S. reported 99,321 new COVID-19 cases, according to data from Johns Hopkins University. It was the highest single day number of cases recorded for any country. Arizona hit 1,525 new cases on Thursday, the most since July 30.

Many parents looked for safer options. At Gila River Arena, fans who came through received a bag with a variety of sweets and souvenirs, including Coyotes signs, mugs, coupons and, Chychrun’s favorite, candy. 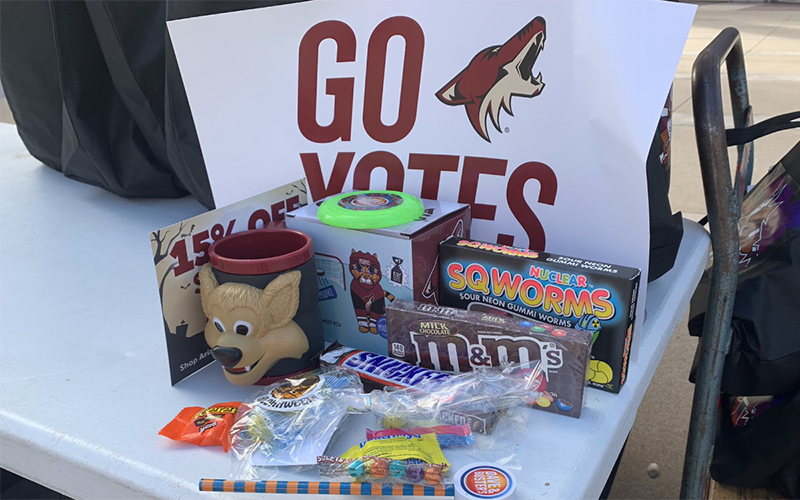 Children that participated in the Coyotes’ drive-thru Halloween event enjoyed a variety of candies and gifts. (Photo by Michael Gutnick/Cronkite News)

“I’ve always had a sweet tooth since I was a kid. I love candy,” Chychrun said. “I’m a big Skittles fan. I love Skittles, and Sour Patch Kids, too. I’ve always been more of a candy guy than a chocolate guy. But, Skittles for sure is my No. 1.”

While the team would normally be in the midst of its regular season at Halloween, the Coyotes focused instead on the season of spookiness, brewing up a special experience for families and fans.

The team turned the Westgate Entertainment District into a Halloween extravaganza.

Spooky tunes blasted throughout the plaza. A mountain of pumpkins was piled high to create the perfect photo backdrop. And lined up in two rows, cars cruised through with fans waving through open windows.

Many of them came decked out in costumes, including one fan in an inflatable chicken outfit. 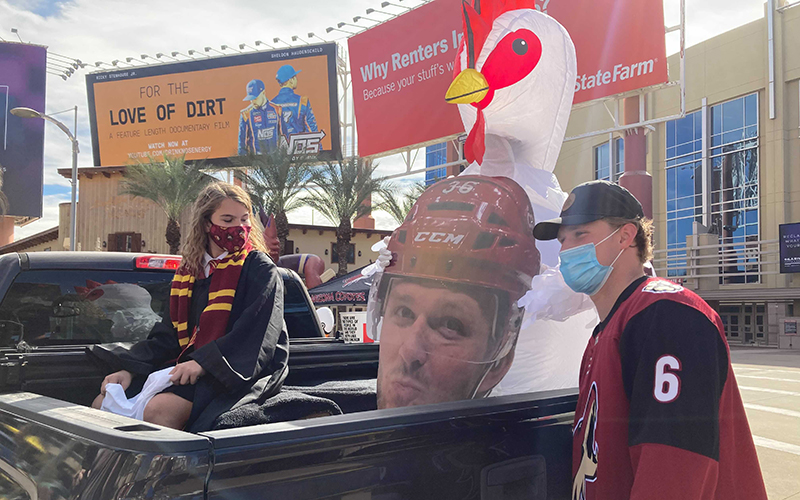 Arizona Coyotes defenseman Jakob Chychrun posed with fans, including one in an inflated chicken costume at an event at Gila River Arena. (Photo by Michael Gutnick/Cronkite News)

“That’s the scariest!” Chychrun shouted with a smile.

Chychrun shared laughs and posed for photos with fans – special moments that vanished for nearly eight months while the 2019-2020 NHL season was postponed due to COVID-19 concerns.

However, the league rose from the dead on August 1 when teams resumed play in “bubble” environments – without fans – in Toronto, Ontario and Edmonton, Alberta in Canada.

When play resumed, the Coyotes exorcised some of their demons, emerging from a special qualifying round in the postseason before falling to Colorado in a first-round Western Conference playoff series. It was their first postseason appearance since 2011.

Nevertheless, the 22-year-old Chychrun was thrilled to treat fans to a little of the fun that typically comes at Halloween, despite these haunting times.

“It’s definitely not normal times, which we’re kind of learning to live with,” Chychrun said. “But anything we can do like this is just great. I was looking forward to it myself, just to get some normality; to see some fans. It was great to see some familiar faces.

“Anything you can do to kind of make someone’s day, or bring a smile to their face, is really what we’re here for.”