College football’s bowl season is on, including three games in Arizona 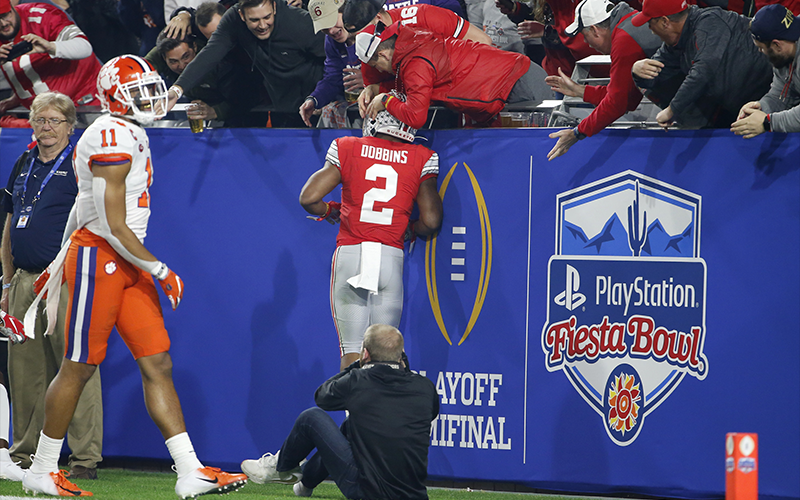 This season’s Fiesta Bowl may look a bit different and require some social distancing, unlike last season’s game between Ohio State and Clemson, but college football has decided to move forward with bowl games. (Photo by Ralph Freso/Getty Images)

Despite concerns that COVID-19 would cancel college football’s postseason, Bowl Season released its schedule for this year’s games Friday, confirming that Arizona will host three games this winter.

The 37-game postseason will begin with the Tropical Smoothie Cafe Frisco Bowl on Dec. 19 and culminate with the College Football Playoff National Championship on Jan. 11.

“It certainly took a lot of time and cooperation between bowl organizations, their conference partners, ESPN, etc., to create this schedule (during the pandemic),” said Nick Carparelli, Bowl Season executive director. “I think it definitely took more time for it to all come together than any of us would’ve liked.

“Football programs have not been afforded the same number of playing opportunities this year as they have in normal years, so for us to be able to provide the opportunity for student-athletes, especially the seniors, to play one more game and enjoy the bowl experience was something that was very important to us.”

More games could be added. In particular, the Las Vegas Bowl, in which both Arizona and Arizona State have played at least once since 2008, has yet to decide whether it will play this year or postpone due to the COVID-19 pandemic.

“A decision regarding the Las Vegas Bowl will be announced in the near future,” according to Bowl Season’s press release Friday morning.

If Sin City’s bowl decides not to field a game this year, it wouldn’t be the first casualty of the pandemic. Other games that typically feature Pac-12 teams, the San Diego County Credit Union Holiday Bowl and the Redbox Bowl, will not be taking place this season.

“I think we would have been naive to think that there wouldn’t be a few bowls impacted,” Carparelli said. “The handful of games that have elected to take this year off did so with the long-term best interest of their game in mind. Those games are extremely important to the communities that host them, as well as the conferences and institutions that are counting on the opportunity to play in them. We fully expect that each of them will be back better than ever in 2021.” 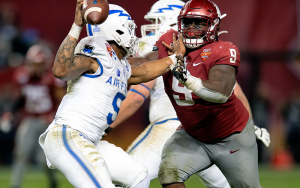 Commonly known as the Cactus Bowl, the game was corporately sponsored by Cheez-It for the last two seasons and will now feature a unique conference matchup along with its new title sponsor.

The game replaced its Pac-12 affiliation with a slot for the Big Ten, which will send a representative to play against a team from the Big 12. It is the only bowl game featuring a Big Ten versus Big 12 matchup, barring a meeting between the two conferences in the College Football Playoff.

“One big reason why Bowl Season is so special is because we get to enjoy matchups that we don’t see in the college football regular season, and that’s even more so the case this year,” the bowl’s executive director, Mike Nealy, said in a press release Friday. “With teams from the Big Ten and Big 12 facing off on a Saturday night on ESPN, playing in a Major League Baseball ballpark, we know the Guaranteed Rate Bowl will be a great one to watch.”

As Nealy mentioned, the Guaranteed Rate Bowl will take place the night of Dec. 26. Specifically, kickoff is set for 8:15 p.m. MST, and the game will be televised on ESPN.

Arizona’s next bowl game will take place on New Year’s Eve at Arizona Stadium in Tucson. The NOVA Home Loans Arizona Bowl is set to begin at 2 p.m. MST on CBS Sports Network.

It is only one of two bowl games not to be televised on ESPN’s family of networks. The other, the Tony the Tiger Sun Bowl, was won by ASU last season.

The Arizona Bowl also announced Friday that fans will not be allowed to attend due to COVID-19.

Much like the Guaranteed Rate Bowl, the game in Tucson will also feature a new conference matchup. The Mountain West, which has been affiliated with the bowl since its inception in 2015, will now face the Mid-American Conference. The MAC’s partnership replaces a primary affiliation with the Sun Belt.

“This game was a priority as we looked to add a bowl game to our line-up,” said Jon A. Steinbrecher, MAC commissioner, in a Mountain West press release last year. “The opportunity to play in a destination such as Tucson and to compete against the Mountain West Conference made this very attractive. In just a few short years through the efforts of a talented bowl staff and engaged Board, the NOVA Home Loans Arizona Bowl has quickly developed a reputation for providing a quality experience for the participating teams and fans.”

The Arizona Bowl is also making a step up in prominence within its affiliated conferences. It will now get to select “upper echelon picks in the aligned conferences,” which it was not able to do in the past, according to the Mountain West.

While the Arizona Bowl continues to fight to gain more national notoriety, the third and final Arizona bowl game already has plenty of that. The Playstation Fiesta Bowl, one of the fabled “New Year’s Six” bowl games, will make its return to State Farm Stadium in Glendale this winter.

After hosting a College Football Playoff Semifinal last season, the Fiesta Bowl will not be included in the playoff this year. However, it still retains its status as a premier bowl game and will likely field some of the best teams in the country.

This year’s iteration of the Fiesta Bowl will take place Jan. 2 at 2 p.m. MST, televised on ESPN.

As a member of the New Year’s Six, the Fiesta Bowl does not have any formal conference tie-ins. However, due to COVID protocols encouraging the limiting of travel distance, the game could feature top teams from the West Coast.

“In all the conversations I’ve had with bowl games and with conference administrators, they want to maintain some sense of regionality as much as possible,” Carparelli said. “(We want to) minimize the distance the student-athletes have to travel to keep them safe, and also to save some money. It’s obviously less expensive the shorter distance you have to go.”

Whether this impacts Arizona’s games is still unclear, but it would not be shocking to see the bowls alter their partnerships. With the Guaranteed Rate Bowl’s partnerships with the Big 12 and Big Ten, and the MAC’s affiliation with the Arizona Bowl, schools would have to travel a large distance to play in the games here.

However, Carparelli added that, while geographic limitations could play a role in the placements of teams in particular games, “a lot of the games will be sticking to their contracted (conference) partners as well.”

Overall, while many factors, such as a COVID-19 cancellation policy and the games’ economic viability, remain darkly veiled, Carparelli was just excited to have games scheduled.

“The fact that the majority of non-conference games this year will be bowl games will make this bowl season even more interesting than it typically is,” Carparelli said. “I can’t wait.”